I got into the D'Uccle breed about 2 years ago now. I started off with a trio; one rooster and two hens. About 1 year after I bought them, I lost my top hen. Wanting more breeders, I bought two straight run chicks. 1 male, 1 female as it turned out.
3.5 months later and I lose my breeding rooster to a heart attack.
Fast forward to yesterday. The new chicks are 4 months old. Suddenly, the pullet is in very bad shape and completely unresponsive. Gave NutriDrench. Nothing. Force fed. Nothing.
Less than 12 hours later and she's dead.

I love this breed. I want to breed them. I want to show them. But now I'm at my wit's end. I've invested so much time and money into these birds and have gotten nothing out of them. Literally not even a single egg.
Granted, I did not buy these birds in the best of settings. I got them all from two different swaps from breeders whose information I don't have.
My remaining hen has a reproductive disorder, which leads me to believe that the first breeder I bought from sold me sick birds.

What I want to know is if my D'Uccle's issues are more likely from poor genetics or if this breed is known to be more fragile than others.

At this point I am trying to make the decision about whether or not I should continue with this breed. If they are prone to be more fragile, then I'm likely going to give it up. No sense in investing money into a breed that is more likely to perish.

TIA and I apologize for the long post,
Cyprus

I have had troubles with chicks surviving shipping from a hatchery. Otherwise I have found them to be no different than other breeds. Mine have been robust and feisty. I think you may either be having a run of bad luck or the breeder stock isn't hardy. I would try again with other stock from another source. Mine survive fine here in Wisconsin and go through our harsh winters without anything extra.

I think you got off to a bad start. (Not the healthiest birds to begin with). I hope you find better stock.

None of mine are from a hatchery, and yes, I find them to be pretty fragile. I pretty much just plan for losses. Mine came from quite a ways away, but it seems like after a couple of generations on my property, they are a little better.

I agree that it is VERY frustrating, but I've always loved this breed, so....

Hannah15 said:
None of mine are from a hatchery, and yes, I find them to be pretty fragile. I pretty much just plan for losses. Mine came from quite a ways away, but it seems like after a couple of generations on my property, they are a little better.

I agree that it is VERY frustrating, but I've always loved this breed, so....
Click to expand...

I've had d'Uccles since 1993 (1992?) and have loved them! My original birds came from a neighbor, from MurrayMacMurray stock originally. Since then, I've kept the line going, with intermittent additions from MMcM, Cackle, and unsuccessfully from a 'SQ' line. Except for that little group, they've been healthy and done well. My oldest birds have reached ten years, not bad, IMO.
I don't show, so haven't been concerned about SQ, just want birds that look like they should. No issues with winter either. Mine are all millie fleur, love the color! 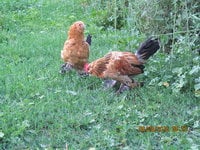 I can't seem to get the most recent photos to download, sorry. 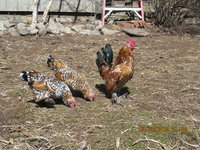 Anyway, at least my non-show birds have been lovely, and the hens are broody; I've got chicks right now, that aren't in these pictures. Cute! Hardy!
Mary

I go to a sale at out Amish store and they were selling these, chickens was considering getting soem but are they really fragile?I would like to know myself.

Mine are anything but fragile! They live with my flock of standard birds, and roost in the coop, usually eight feet up in the rafters!
The one issue with bantams of any sort is that they are first in line as hawk bait. They are careful and have lots of cover, but I have had occasional losses to raptors. occasional, as in one hen and two chicks one day last summer. None so far this year.
I think Silkies are fragile, not Belgian d'Uccles.
Mary

Ok maybe I will get some then.

My d'uccle have always been feisty. My roosters will run off the bigger Orpington roosters. They have attitude.
You must log in or register to reply here.
Share:
Reddit Pinterest Tumblr WhatsApp Email Link