Hello! I have been searching the internet for information on black Silkie genes and how they interact with other colors and I have found basically nothing! So I turned to BYC! How does the black color interact with others? I don't need the Black on Splash and Blue combo, that's easy enough to find, but how about buff on black? Partridge on Black? What gene controls black and is it dominate or recessive?? Thanks in advance!

The hard part for me is setting up the genetics to start with. There can be more than one way to make black or buff, for example. Theory and practice are not always the same either. The calculator gives you the theory and gives you a base to start from but you can get some pretty wild differences when you hatch. Another example with buff and black. According to the calculator if you cross buff and black you get solid black, but often you get yellow feathers showing up with that black. I find many of those to be striking.

The common way to make a black bird is with the Extended Black gene which is strongly dominant. But other gene combinations can give you a black bird, such as Birchen with the right melanizers. You cannot tell by looking which gene combinations are present. Unless you know the genetics you have to assume something and very few of us truly know our birds that well.

While the extended black gene is dominant over the others at that point on the DNA, there are other genes that modify extended black. The Blue/Black/Splash gene is one, others include dominant white, recessive white, or lavender. You might consider the baring gene another. Some of these are dominant some are recessive.

Another issue making it challenging is that other than the sex linked genes you are talking about gene pairs, not just one gene. Often the two genes at that gene pair are not the same. For example if you have both the extended black and wheaten gene at that location the bird will appear (in theory) to be solid black. But when you cross it with a red bird you can get some offspring that are black, some that are red. It depends on which one of those genes at that gene pair are passed down. 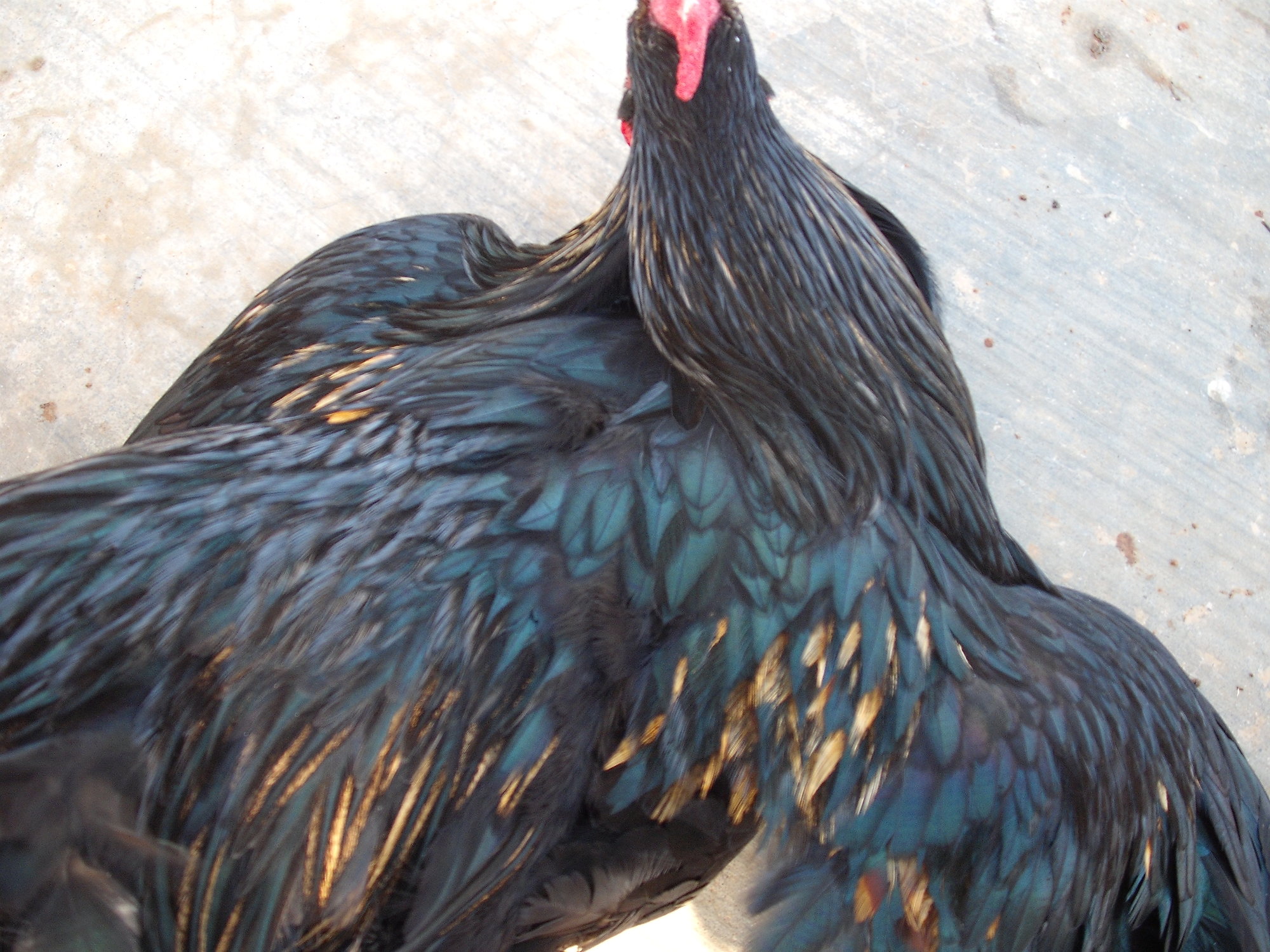 Then in these the white birds are supposed to be solid white, but you can see some different colors leaking through. 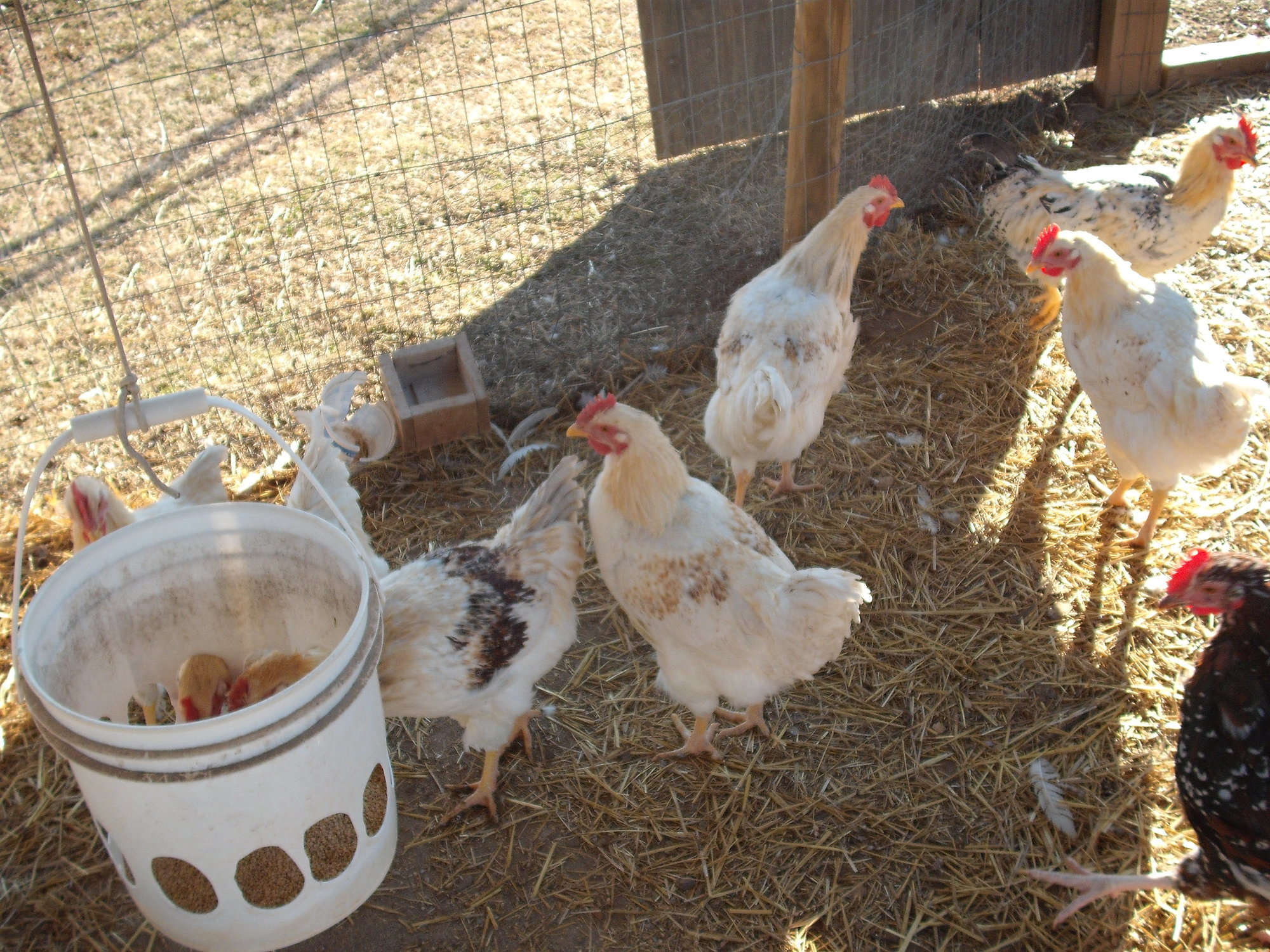 Chicken genetics are a mess. There are rules that are followed but there are a lot of other genes that can modify the result you actually get. That calculator can be addicting but you can learn a lot of the basics from it. Just knowing where to start is often a big challenge.

Wow... I get what you mean! They are a mess! It is all starting to come together though, the more I read and play with that calculator and see others results from color crosses, the more is makes sense!
So what I have gathered is that if I want to play around with colors, I have to be careful of the recessive "hidden" genes that could result in leakage. It seems that if I want to play around with my Black Silkie hen's eggs I should probably just stick with a blue or splash Rooster. Who knows though? I Might have some fun messing around with colors and leakage ;-)
Thank you again for you help!

If you have serious goals, like you are breeding show chickens, you have to be careful. I'm just into it for fun. I'll have a goal and try to get there but then I'll try something different. Sometimes it just doesn't work. I accidentally introduced melanizers that turn red feathers black and birchen when I thought I was just getting extended black chickens. Those were a pain to get rid of when I thought it would be easy. It doesn't always go as planned and the hidden ones can mess you up but it is still an adventure.

Honestly, I'm in it for fun too. Maybe one day I'll get into the showing business but at this moment I just want to experiment with genetics and have peeping chicks hatch from eggs LOL. As of right now I only have hatchery birds (who aren't terrible quality for being so) so I wouldn't be a Show contender anyway!

Do you know anything about Porcelin genetics in Silkies? I might have an opportunity to purchase a rooste if this color but I want to find out a little more about it first.

I have never played with Porcelain chickens. I tried an internet search but found very little reliable information on the genetics involved. Porcelain appears to contain Lavender and Mottling, both recessive genes. That means you need both genes at that gene pair to be the recessive gene for you to be able to see the results.

Mottling causes the tip of feathers to have a black "bar" with a white tip. I'm not sure how well it shows up on white birds but it's really noticeable on red or black birds. Speckled Sussex are a good example on red.

Lavender is a gene that modifies colors. It changes black feathers to a sort of blue/gray. The way I understand it Lavender dilutes red feathers to a sort of creamy or straw color. I think when Lavender dilutes black you get the base color for porcelain and when it dilutes red you get something called Isabel, but different breeders in different countries seem to disagree about that.

While I'm confident porcelain birds should both mottling and lavender I'm not sure what the base color is, red or black. Maybe you can talk to the person you would be getting them from about the genetics.

That brings up another point when you start looking at genetics. What country or you in? The same color can have different meanings in different countries. Each country produces it's own breed requirements. A breed may be recognized in one country but not another. Even if two chicken breeds have the same name in two countries the birds may look quite a bit different. Some countries recognize certain colors, others don't. Even if they recognize the same colors the descriptions of those colors can be different. It seems that if anyone sees an opportunity to make this stuff more confusing they will jump on that opportunity with both feet and jump up and down while shouting whee whee whee.

While this stuff can be frustrating it is still fascinating to me. My hat is off to the people that can take a non-show flock and create show quality birds. What they do is not easy.

Some Questions About Chicken Genetics

How to know if a silkie is true black?

How would I go about making a new silkie color? (Like hypothetically)