This is just a post to share my continued amazement of my chickens! Several weeks ago I noticed one of my Speckled Sussex pullets on the nest during my twice daily egg gathering.
Then it hit me, she was going broody! This is my second year with chickens and I had not experienced broodiness with my original flock of 8. I attempted to break her but she was persistent so I let her set. One week in and my 18 month old Barred Rock decided she might like to be broody as well so she took over the nest from the Speckled Sussex. They tussled a while but the Barred Rock won. She successfully hatched 3 chicks and I moved her to the nursery coop and run. I used a dog carrier for their coop and moved in into my feed room each night for extra security. I went out each morning and moved the carrier into the run in sight of but separated from the flock. 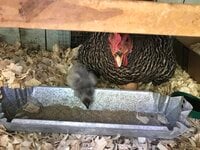 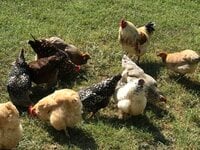 We plan on going out of town and our friend will be chicken sitting. Our coop has auto pop doors and not wanting our friend to make 2 trips a day I really needed to get momma and babies accustomed to going into the big coop at night. I began putting the carrier into the big coop leaving the carrier door open as I was sure no one would tangle with momma! Sure enough, 2 nights of this and momma was spotted last evening walking her 3 week old youngsters into the coop on her own!!

I know this is routine smarts that most poultry people may take for granted but I continue to be amazed at nature and applaud my sweet adoptive momma! Oh, and momma raised babies are the best. Almost no work on my part except some feed, security, and unnecessary worrying!

Excellent! I much prefer broody raised chicks myself.
Mary

Yeah and if a broody brings the chicks in, they normally are accepted by most of the flock..

Can younger chicks be integrated into area with only Momma and slightly older chicks?

C
When to introduce chicks to a broody hen?