Chick having trouble standing and walking. How do I help her?

I am really new to chickens. We just got six chicks about a week ago! Five of them are doing great-- cheeping and eating and pooping and running around like nobody's business. I started noticing a few days ago that one of them (Janice) is not doing so hot however. She seemed way weaker and less energetic than the other ones. She will just lay down and fall asleep where she is and the other ones were stepping on her, pushing her out of the way at the food dish, etc. Last night I decided to separate her. Generally seems weak, sleepy, and uninterested in things. She is eating and drinking some, but not as much as the others, and her poops are normal. But she just isn't moving like the other ones. And she definitely looks unwell-- her feathers (the ones she has, anyways) are bedraggled and messy looking, has her eyes closed a lot, etc.
She is an unknown mixed breed, black with a white chest and feathered legs. Not sure exactly how old, probably 2-3 weeks.
On closer observation, it seems like she is having trouble standing and walking, specifically with one leg. I have to encourage her to stand and walk. She will take a few shaky steps and then sink down again like it was too much effort! She doesn't seem to want to put much weight on that leg, she limps and it just kind of slides out to the side/behind her and after a few steps she will give up. When I set her down she lets it curl up under her uselessly and has to extend her wings for balance.
Does she need vitamins? Is this spraddle leg? Should I hobble her? It doesn't look nearly as bad as pictures of other cases I have seen on here but she's definitely having trouble and can't keep up. Looked at her feet, they are clean and I don't think it's bumble foot. Leg doesn't seem injured; she doesn't complain at all when I move it. Advice on what to do would be greatly appreciated!

I would defiantly try to get her some good food, meal worms as a treat.
If her leg isn't spread out oddly it's not spraddle leg. Place her somewhere with really good grip if her foot is sliding.
I used to have a quail who had a bad spine and trouble walking and balancing. I placed upside down half tubes for her to lean on and get around easily by leaning on them. I also tried physical therapy by holding the hen on her back and letting her wrap her feet around an extended finger. gently moving the finger up and down exercised her bad leg and eventually she was able to walk without support.
(not much help sorry)
If possible post a photo of her.

Chick vitamins with electrolytes would be very good to put in her water, and make sure they contain riboflavin. A slipped tendon or other leg bone deformity can be common in chicks. When standing one leg may twist outward, inward, or slightly to the back and side. Most times there is no treatment, although many try splinting with vet wrap. The main thing is to get her to drink plenty of fluids and vitamins, then coax her to eat. Some use chick chairs with the feet touching the ground to help strengthen the legs for short periods. You can place food and water right infront within reach. I would also look at the possibility that she could be suffering from possible coccidiosis, and just be weak and dehydrated. Cocci is common after 3 weeks. Cocci symptoms include lethargy, standing hunched or puffed up, not eating, and runny poops (sometimes with blood.) Below are some articles to read:
http://www.thepoultrysite.com/articles/1051/leg-health-in-large-broilers/
http://www.the-chicken-chick.com/2012/12/coccidiosis-what-backyard-chicken.html

Some pics... Since she doesn't want to stand it's kind of hard to get her to look the camera in the eye 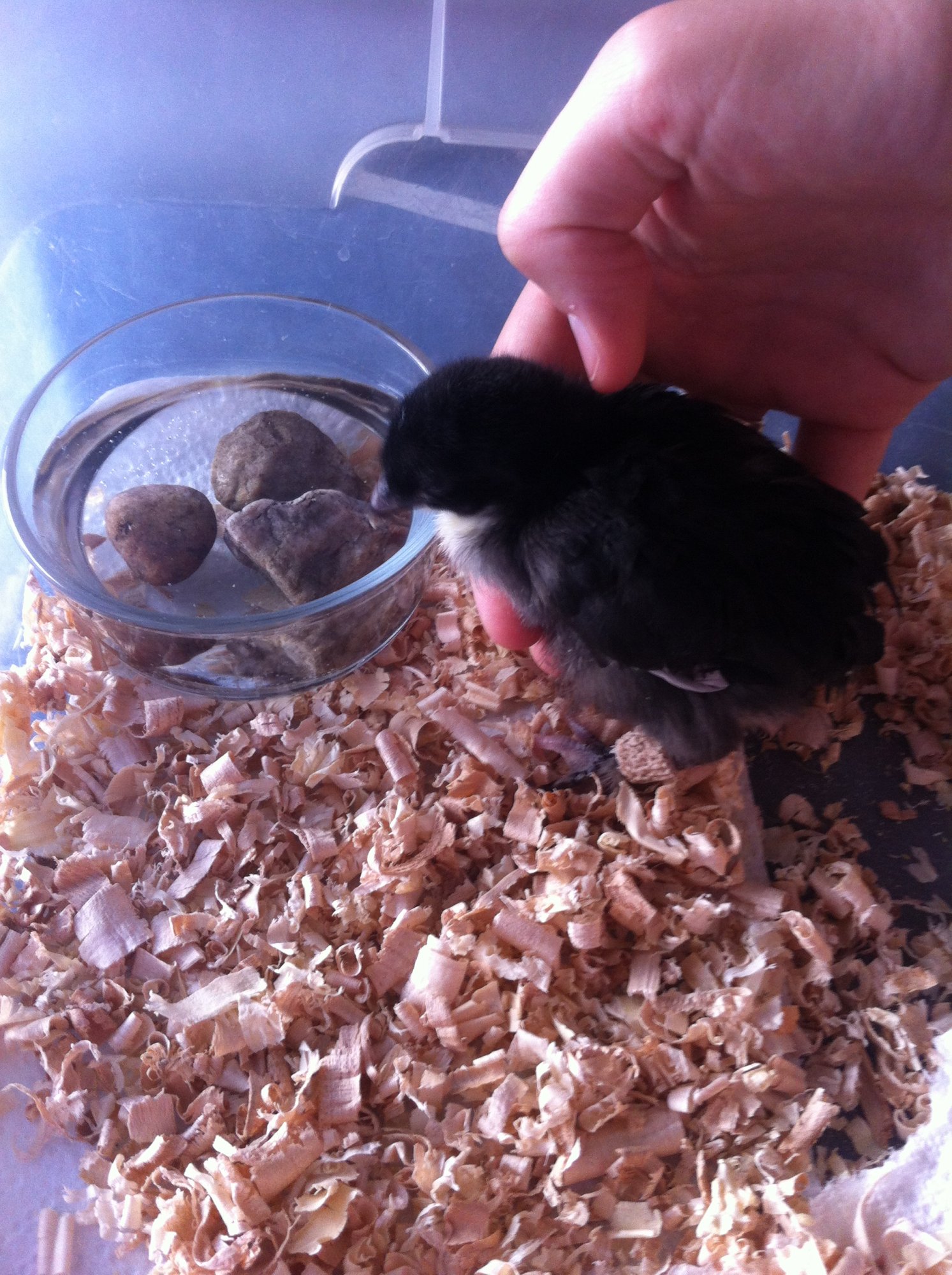 Helping her stand so she can drink. I have to dip her beak in. 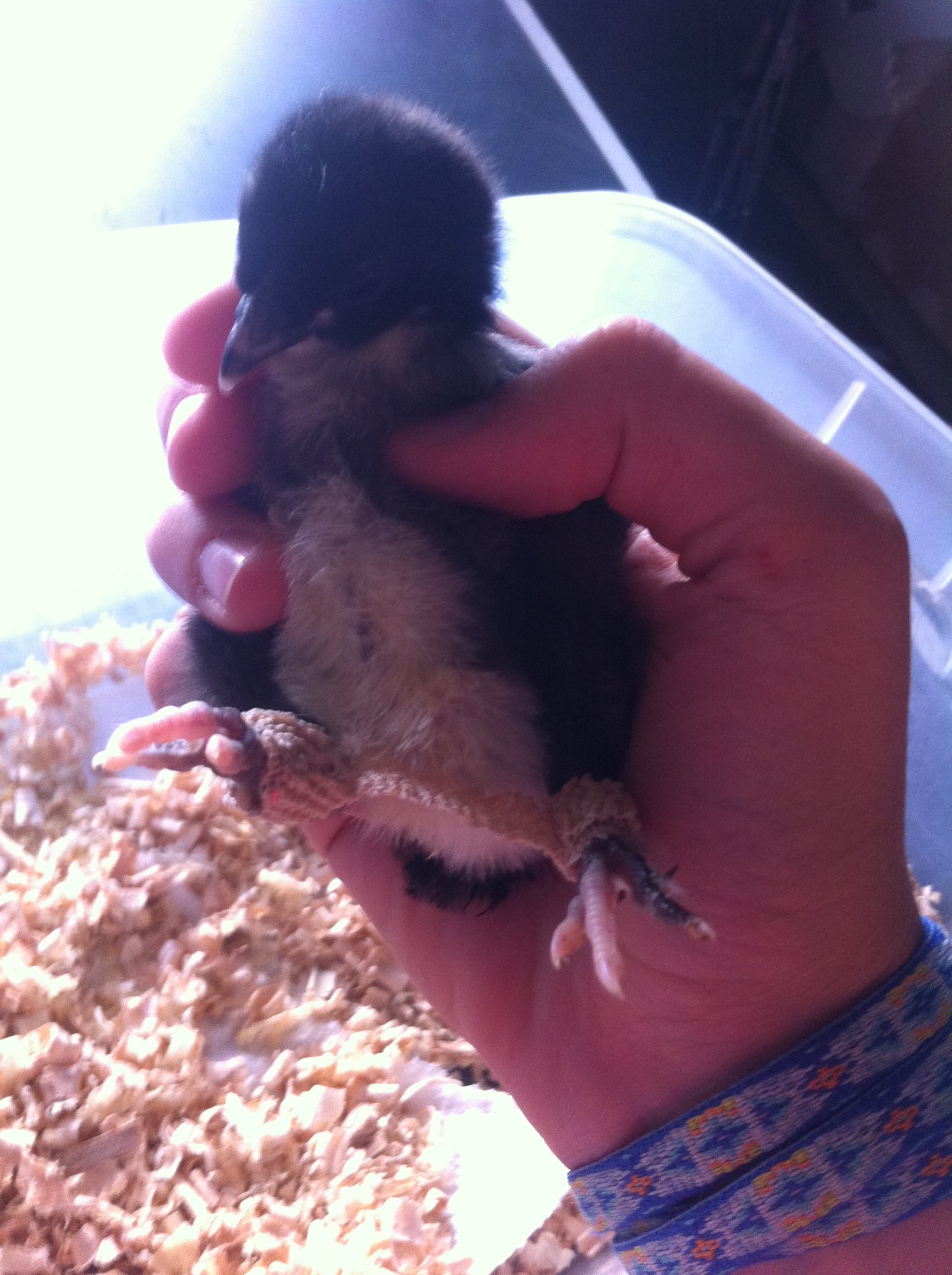 Tried hobbling her. For a few minutes she was up and moving around a bit and seemed maybe a little better and more stable. Then she got tired I guess; laid down and could not be budged but was peeping quite a bit. She did try to stand a couple of times, no luck. Wings all splayed out and loss of balance it seemed. So I took the brace off, but I'm not sure if that was the right decision or not.
I will go and get some vitamins for her water tomorrow. Should I try and get probiotics too, or medicated feed to eliminate the possibility of coccidiosis? Should I be worried that the other chicks will come down sick too? They're separated now but were together for a week before that.