The Russian Orloff is a very tall chicken of striking appearance, with a thickly feathered neck, muffed and bearded, and a small cushion type comb. It is a calm tempered sociable breed that has a very hardy constitution and is extremely cold tolerant. It was originally considered a meat bird, but are now bred to be more duel purpose. The hens are fair layers of brown eggs, considered good winter layers, and they will occasionally go broody.

The breed has been described as early as 1774, when it was called the Chlianskaia, the present day breed is probably named after Count Orloff of Russia who imported and popularized the breed. It is a rather rare breed today, but is regaining some popularity.

It is uncertain what breeds were used in the creation of the Orloff, but the Malay and various muffed and bearded game fowls are thought to have contributed to its makeup. 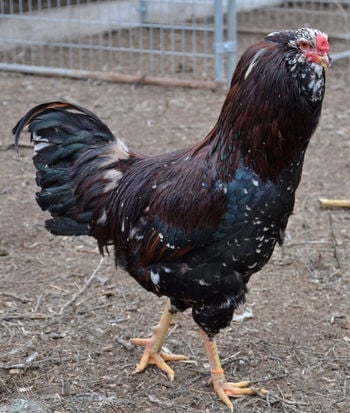 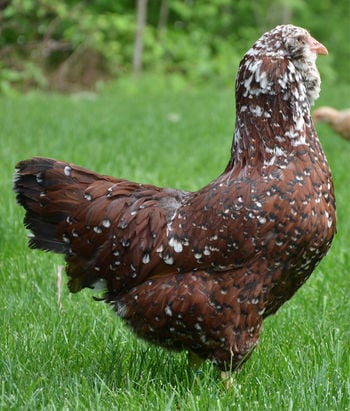 Do you own Russian Orloffs? Are you a Russian Orloff breeder? If so, please reply to this thread with the your thoughts and experiences, including:

Thanks! That was very interesting. I have always been fascinated by Russian Orloffs. There is just something about them that really gets me.
V

Great to see our breed being focused. Only that the Large Fowl Russian Orloff was never a recognized breed in the APA. That was the Black Russian Fowl or Russian Black Bearded as it is known in Russia. The Russian Orloff Society of USA & Canada has been making steady progress over the last two yrs and are diligently working on a Standard in hopes of gaining admittance into the APA.

the Orloff Bantam although recognized by the ABA is currently in inactive status due to minimal showing. We have had numerous members show both LF and Bantams this year at several shows throughout the USA and Canada. We have a "Winner's Circle" page on our website with photos from the majority of both LF and bantam Orloff that have won ribbons at these Shows. I decided to raise Russian Orloffs because they are a cold hardy dual breed of bird. The look and coloration was also a very large consideration for me, they remind me of a old russian noble in a fur lined coat in the winter (just my mental image). They have proven to me so far that they are very intelligent, very easy going and they come in some spectacular colorations and patterns. So far they are my favorite birds that I own. These birds are all under a year old. More photos of my birds can be seen on my website:
http://highhopesrussianor.wix.com/highhopesfarm#!our-breeders/molyb
And I highly encourage anyone out there with this breed to join the Russian Orloff Society and help us get this breed recognized with the APA! The Land of Enchantment

Love my Orloffs, and nice to see the breed recognized on BYC! I'm new to posting (obviously!) and not all my photos showed. Trying this again. We love our Orloffs! They're bright, excellent foragers (ours hunt and eat mice, centipedes, black widow spiders, and more), interesting to watch, and beautiful. Our rooster is the best head rooster I've ever seen: he manages a large and diverse flock with several lieutenant roosters in charge of different zones, and he won't return to the coop for the night until everyone in his flock is in their correct coops. Gentle and not picky on anyone, they're great with bantams, too.

Where can these be purchased? They sound like a great bird and certainly are pretty.

The Origin Of Russian Orloff , Russian Or Iranian?
2