We are planning to get chickens in the spring and I am working on designing our coop. I'd like to get a sanity check from those with more experience. Tell me what I am overlooking.

Here are a few rough sketches of what I am thinking of. The top is various views of the coop. The bottom image shows the coop within its covered run. There are a lot more details below the images. 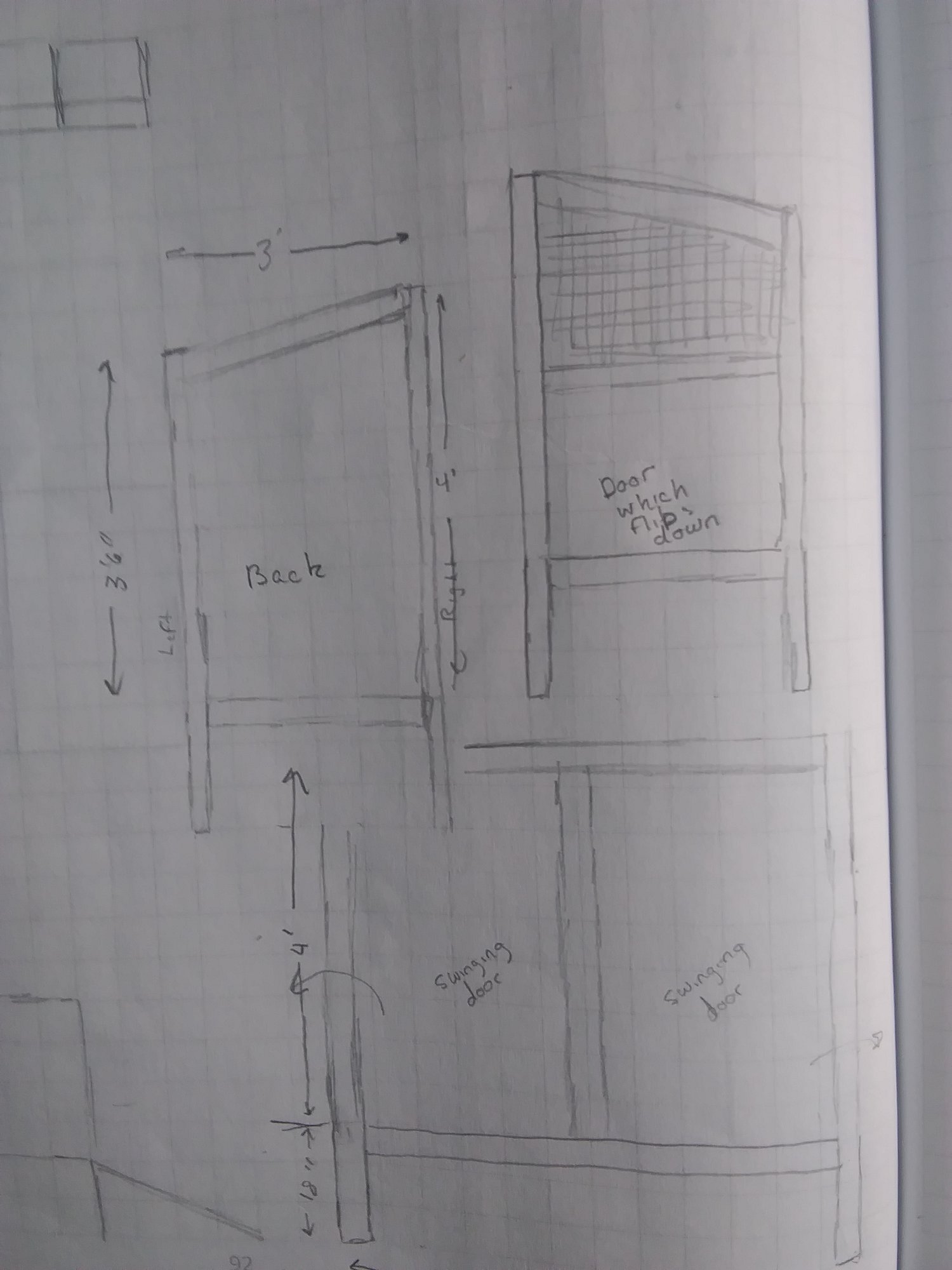 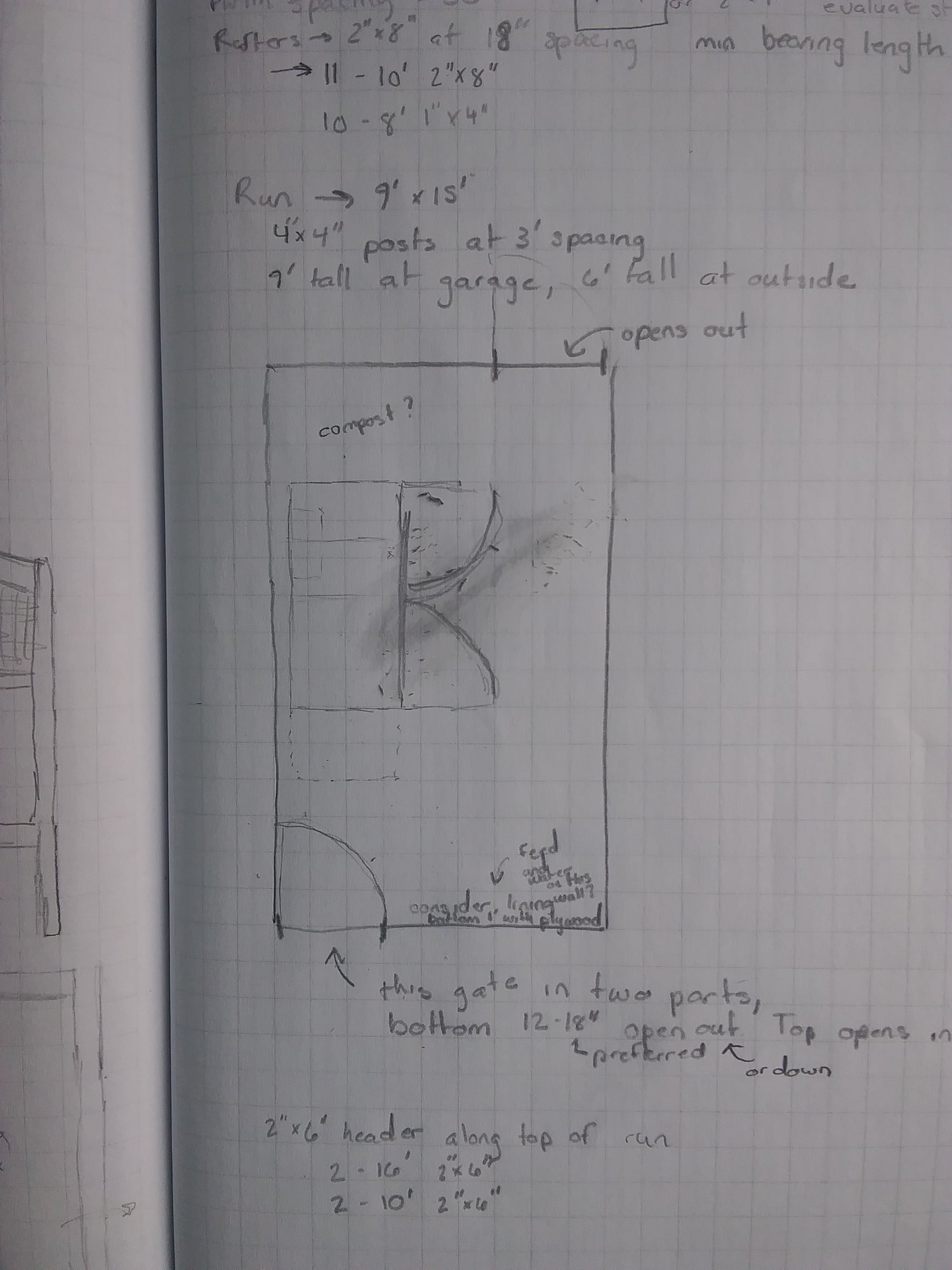 Context: We are in northern Maine and have pretty severe winters. I expect temperatures as low as -40C/F and 8 feet of snow. Summers are cool with high's in the 70's and occasionally 80's and nighttime lows in the 40s and 50s.

My goals in coop construction are to minimize cost and construction time while maximizing the quality of life for birds and make caring for them as easy as possible. We will be getting 4-6 birds. More is not an option due to zoning regulations.

Coop site is dictated by a combination of zoning laws and the need to be able to maintain access throughout the winter as snow accumulates. It will be along the west wall of our garage.

Given the long winter and large amounts of snow accumulation, I think a large covered run is a practical necessity. (I don't want to shut the chickens in a small coop for 6 months). City regulations require a very secure run (covered, 1/2 inch hardware cloth buried 12 inches in the ground) so the chickens should be almost as safe in the run as the coop. In the winter we can wrap the run or attach inexpensive clear roofing panels so that the whole run functions almost like a very large, bright coop. We'll leave either the south end or the top edges uncovered (have to experiment and see what minimizes snow and drafts in the run

The run will be 9'x15' with the long edge parallel to the garage. I'm tentatively planning on using corrugated metal roofing for the run. I want opaque roofing to provide shade in the summer and reduce overheating in spring and fall if we have warm weather while the coop is covered in plastic. There will be two doors to the run, one near the driveway and one into the yard. The one near the driveway will be used for winter access and will be a split door. The lower portion will be about 18 inches tall (easy to step over) and open out so that it doesn't hang up on litter in the run. The upper portion will open in so that it won't hang up on snow banks in the winter (the lower portion will remain closed during the snowy season and be opened to allow wheelbarrow access when needed in the summer).

Rather than trying to design a large coop that can tolerate the snow loads and harsh weather, we will build a small, basic coop that will be entirely within the covered run. The run will keep the snow off (allowing lighter construction) and break the wind in the winter, further reducing drafts. The general coop design is a small open-air coop. The enclosed run will function as a larger open-air coop in the winter to further buffer the conditions inside the coop.

The coop will be 3 foot wide by 6 foot long. It will be 18 inches above the ground to provide additional shade in the summer (and stay above any meltwater issues in the spring). The interior of the coop will be about 4 feet tall (with the roof sloped slightly to one side to shed any rain that makes it into the run). There will be two 3 foot roosts across the coop, 18 inches and 36 inches from the rear of the coop, 2 feet from the bottom of the coop. The back and two side walls will be solid to protect against drafts. The top two feet of the front (6 sq ft) will be permanently open (covered by hardware cloth). The bottom two feet of the front will hinge down to form a ramp. It will be closable, but we may leave it open at night if we don't experience too much predator pressure. The open end of the coop will face away from the open end of the run in the winter to minimize drafts.

One side of the coop will open for access to nest boxes and cleaning. Nest boxes will sit on the floor under the roosts (covered to prevent poop from falling into them.)

Food and water will go in the covered run. I'm thinking PVC gravity feeders for food. I want poultry nipples for water in the summer, but don't know what I am going to do in the winter yet. It may take some trial and error to figure out.

I'm planning to do deep litter in the run. Ideally I will let the chickens out to eat grass and chase bugs in the yard on a regular basis (probably with temporary fences for containment), but both weather and the need for supervision in the yard will limit them to the run a significant portion of the time.

I've tried to design for ease of maintenance and minimum construction expense. What am I missing? Especially for those in cold, snowy climates, what do you like about your coop and what do you wish you could change?
B

Sounds like a plan. I live in a climate similar to yours, but I don't have a coop in your style... I have a 12 x 12 walk-in with no run instead. You have all the basics down, including doors that won't get hung up on snowbanks! Trust me, if you forget that, you will swear. A lot. Good luck with your flock, and welcome to BYC. I hope you enjoy it here.

Just make sure ther are no drafts in the roost area and, I’d suggest a nice overhang for the run to keep as much area as possible dry when it rains or snows. Are you planning to insulate any areas (like the nest box)? Otherwise, post lots of pics as you’re building. It looks great!