I burn most of my burnable waste, and I got to thinking that the fine, gray ashes are just the right texture for dust bathing. So I dumped some of the ashes in the little hollow where the girls dust bathe, and they seem to like it fine.

I'm just wondering if it's safe or not. I only burn wood and paper, stuff I get in the mail. And of course I make sure the ashes are complete cool before I give them to the girls.

I was just worried about respiratory problems or anything like that.

It's perfectly safe and quite often recommended because it deters pesky bugs like mites & lice.

I have seen this many times chickens dust bathing in old ash fire pits epecially in Asia when I travel in China. I haven't noticed it here but others have probally observed this.

My girls love to use our old burn piles to dust bathe in and we haven't had any problems with them. They also have never had lice or mites, so maybe it really does deter pests?

I can't find it, but the first time I read about making your own dust bath for chickens the article said to mix one part ashes to one part sand to one part soil and one part Food Grade Diatomaceous Earth. I did this, but my chickens don't use it!

They prefer digging their own hole outside. The sand got wet in the box I mixed up, and it took forever for it to dry. Now I just sprinkle food grade DE where ever I see them dust bathing. Some folks prefer Sevin dust. Both are supposed to kill lice and mites. Ashes shouldn't hurt.

Thanks everyone! Oh, I'm so glad. I wasn't keen on the idea of having to treat the girls with any chemicals to keep parasites off them, because I try to keep everything as organic as possible.

They are so funny when they dust bathe! They roll over and snuggle down into the ashes, and afterward they're all gray.

yes its safe for them to dustbath in the aashes.they say the ashes will control an stop the mites from bothering them.

There is nothing better than a fire pit. All humans must remain upwind, or be choked...

Yikes! I wouldn't - not if it's a trash-burning pile.

A trash burn pile produces ashes that aren't the same as plain old wood ashes, because trash - even if it's just paper, cardboard etc. contains a lot of chemicals that are given off in the smoke and retained in the ash.

Inks and other things that are part of the trash you are burning contain heavy metals (lead, mercury etc.). You're chickens bathe in those ashes, and absorb the heavy metals and other chemicals, and voila, they're in your eggs

I don't want you to think I'm "talking trash", so here are some links and info:

From the University of New Hampshire Cooperative Extension :
"The character of household trash has changed dramatically in 50 years. Today's trash can contain inks, dyes, chlorine, plastics, heavy metals and a variety of synthetic materials which produce toxins as the trash burns at the low temperatures characteristic of backyard burn piles. Many of these toxins get released directly into the air, where they stay close to the ground or fall onto plants and soil, where they can affect the health of residents and neighbors, especially children. Other pollutants remain in the ash, where they can contaminate soil and groundwater. "

From the New York Department of Environmental conservation's sheet on backyard burning :

"How Can Chemicals From Burning Trash Get Into Your Food?

* Smoke and ash can settle on fruits and vegetables.
* If ash is mixed into the garden soil, chemicals can be taken up by crops.
* Chemicals can enter milk, eggs or meat if farm animals eat contaminated feed or soil."

More info at the EPA's site on Backyard Trash burning , and at a site called ThriftyFun , that says:

"Burning garbage also releases dioxins, a known carcinogen. Dioxins are produced when materials containing chlorine (like most paper and many plastics) are burned. When garbage is burned, these heavy metals and chemicals are released, unfiltered, into the air. They build up in the soil and water in our environment and make their way into our bodies through the foods we eat and the water we drink, causing serious health concerns for our children and ourselves. The EPA confirms that exposure to dioxins through food poses one of the highest cancer risks to Americans among toxic chemicals."

I found all this stuff out because I have really bad asthma, and I used to work at a vets office that had an incinerator they burn trash in, and I had horrible asthma attacks. That's when I started googling to find out what was going on. Trash burning is really bad for your lungs.

Yes, just to clarify: The fire pit pictured above gets fed nothing but tree branches, berry canes, leaf clutter and personal info ripped from mailings. Adding plastics and other `stuff' would convert it into a chemical charnel pit; and I would pay, oh, yes. 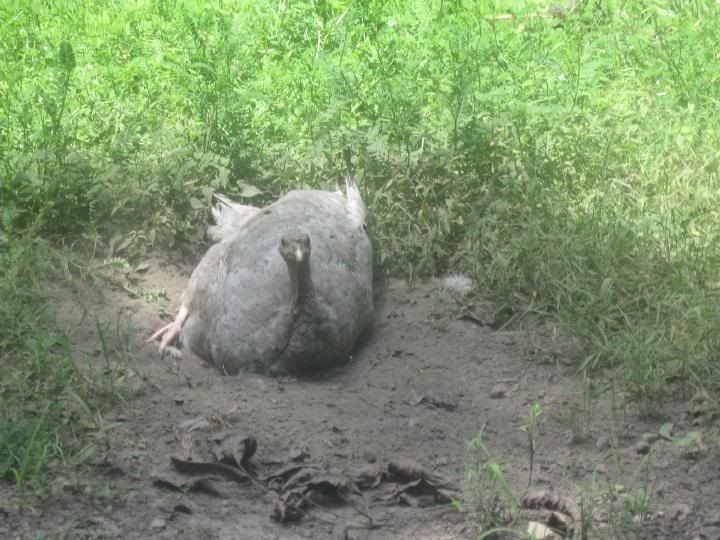 T
What to include in a dust bath?

How to set up a chicken dust bath
2

K
How do chickens make their own dust baths?
2