I thought for sure I had killed them. Out of the eggs I received shipped, four have almost completely hatched, one pipped internally and died, four died at day 15 or so, one had a blood ring and the others were clear and tossed when I put the others in the hatcher.

I was praying that they would make it, I had temps all over the place. These eggs were ones I had set before I got the new bator and I had a temp spike of 106 and I had no idea how long it had been that high.

Jody, these were your eggs, so given the trials I had I think that is excellent! I'm so pleased and they are beautiful! I'll post pics when they are fully hatched and dried off. They are half out but still in the bottom half of the shell trying to finish making their way out! Woo Hoo!!!!!!

congratulations MB, happy for you.

congrats yaaaaaaaaaa!!!!!! im so happy for you. you definately have to post pics as soon as you can.

Congrats..I'm glad to hear you still got some chicks even after the trials you went thru. Cant' wait to see pics.

Here's a picture of the babies! Only two survived the hatch. One never fully made it out of its shell and the other hatched but expired later. It looked very premature and you could still see yolk sac (alot of it) attached. I'm sure it was due to the temp spikes. Overall I'm very pleased because I wasn't expecting any to hatch at all. I just set 8 silkie eggs in the hatcher. I sure do wish I would have known what was wrong with my bator earlier, these guys are the sweetest! I want more of them!

On a great note the new bator is AWESOME! After I got it, I set tolbunt eggs and I'm very excited to say that all but one of the eight that I was shipped are developing nicely! 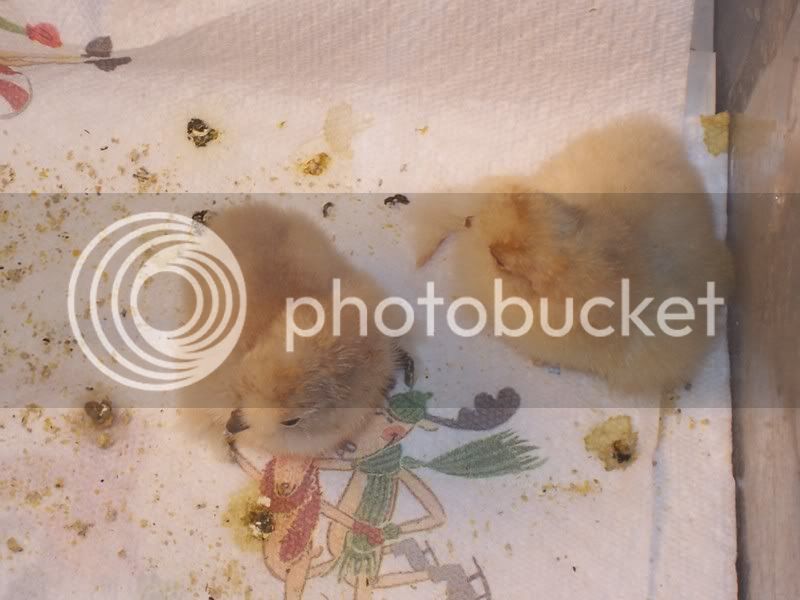 Aww they are beautiful. Congrats!

How cute. How are the eggs I sent you? What day are they on now. Hard for me to remember. Hope you get more babies from future hatches. Those bators can really be a pain can't they. I just set 18 of frank's serama eggs under 3 broodies today. Keep your fingers crossed. I figure they can do better than me and an incubator, right. I have a ton in the two bators though. And more coming. What am I thinking.

Quote:
Marie I just set 8 of the 12 you sent me in the hatcher. I didn't get the new Hovabator until after I had set your eggs but I think that they will make it. Temps are good and the humidity is at 70%, so I'm holding a vigil over the hatcher. I'm hoping that my string of bad luck has ended and I will finally be able to hatch something. I also put three of my duck eggs in the hatcher as well. All due on Monday. I'll let you know!

Seramas! I would love some seramas but I think that at this point DH would kill me! I have two 104 qt brooders in the office, a 50 qt brooder for babies and a bin full of buttons! I just made a new brooder, I'll post some pics!

Wednesday at 10:21 AM
Chicken poppy