It has taken me 3 years but I now have a good breeding flock of the frost white/sport cream legbars. They are doing great and laying very well. I have lots of little chicks hatching. I have heard that others say the chicks are weak or unhealthy but mine are all doing great. I mean - look at those cute little chicks that just hatched! They are wonderful. 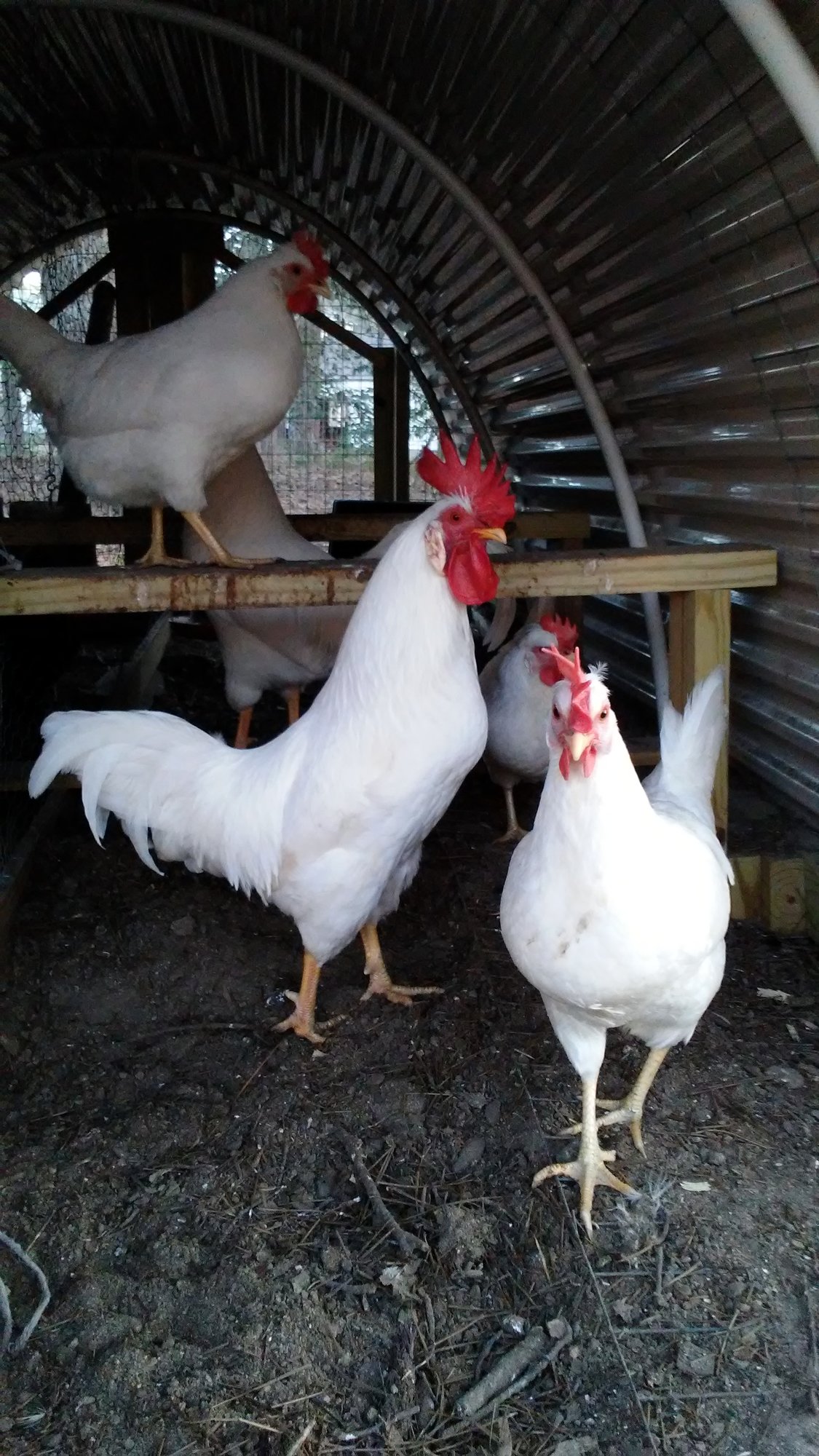 Anyone have experience with this?

Wow - I have no idea why it posted multiples of each picture - never had that happen before!

Yes, back in 2012 people were having trouble with getting breeding programs going with the White Legbars. I think it was from inbreeding. Assuming that only one of the 6 imported Cream Legbars had the white gene any white birds that were being pair were all one or two generations removed from the imported hen that was carrying the white gene. Most were really closely related.

Some people tried getting white stock from other parts of the country but that didn't help since they were still only 1-2 generations removed.

I have had Cream Legbars Since 2011. All of the older lines have the white gene in them even if no white chicks ever hatch. We grow out about 100 legbars a year and didn't see any white sports until our 5th year with the breed. So it was there the whole time just hidden for 5+ years.

Early on some breeders were also claiming that the white legbars laid bluer eggs that the Cream or Gold. One person even found a scientific study that seemed to support a theory that the brown bloom on the eggs was diluted by the same gene that diluted the pigment in the feathers. I have debunked that theory. The white hens in our flock do NOT laying bluer eggs than the Cream hens do.

Are you going to breed for cresting in your flock? I see a few birds with tiny crests but it looks like the cresting is not fixed in you flock.

What weight are you getting on yours. Weigh my cockerels last week and at 10-12 months old they were all between 5-6 lbs. I haven't looked at hen weights for a while but thing they are probably 4-1/2 to 5 lbs at the 10-12 month age. 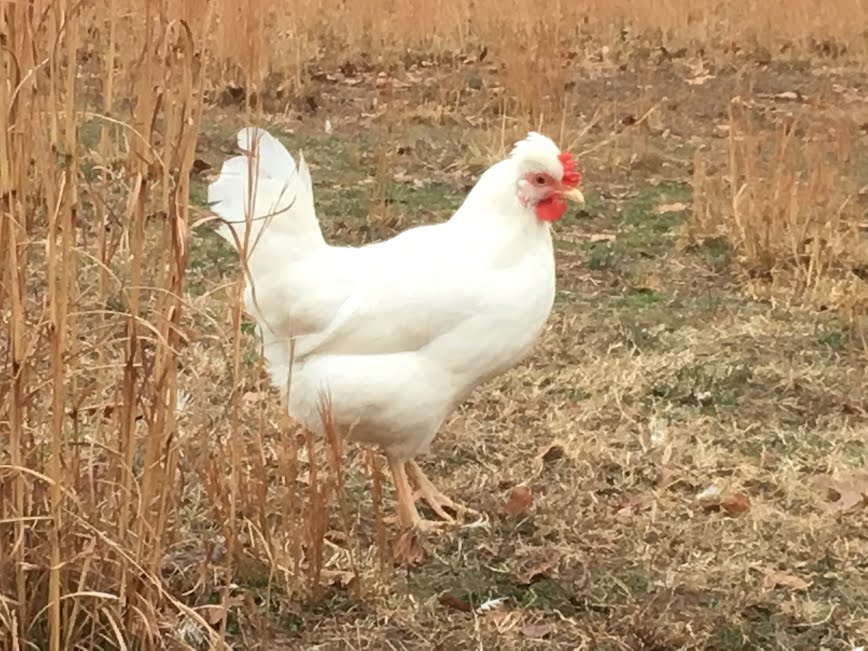 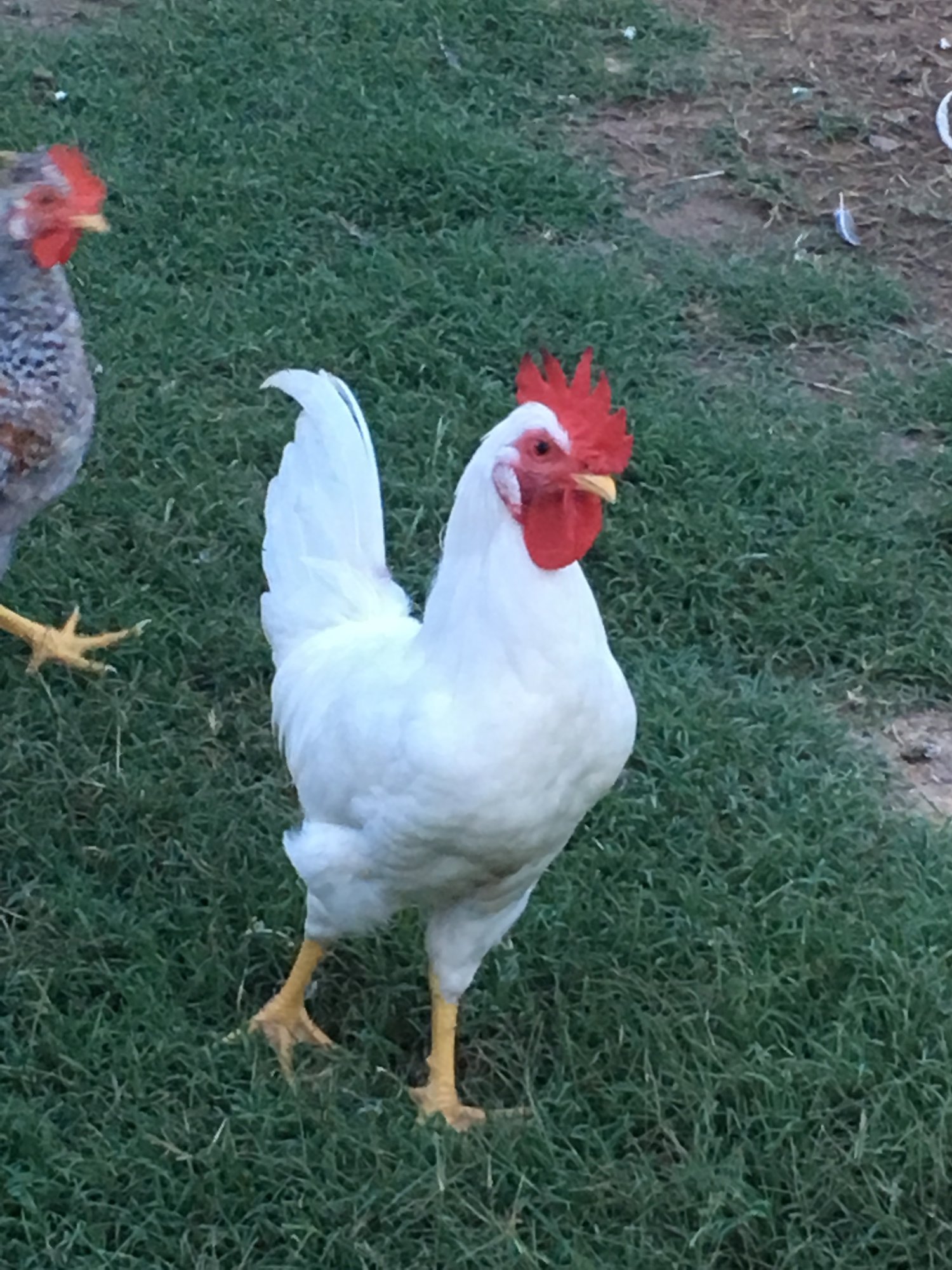 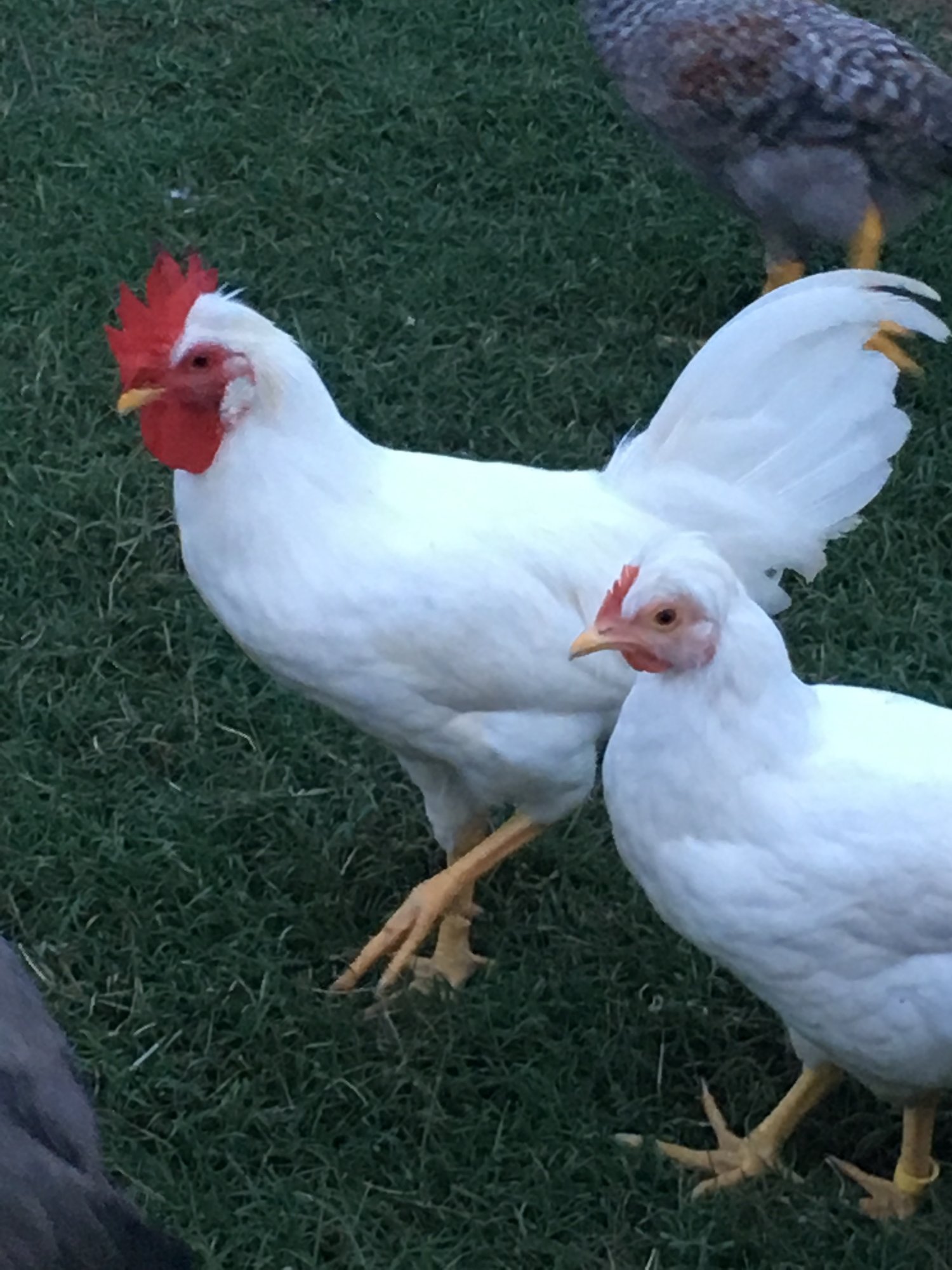 Wow you all have beautiful white legbars!! I have 4 white legbar chicks Im starting with. They are only about 3 weeks old so they have a long way to go yet. I have Cream Legbars also. I am super excited to work with the whites!

This pullet hatched along with a group of CL eggs I bought. Anyone know what she is? The others are standard colors. 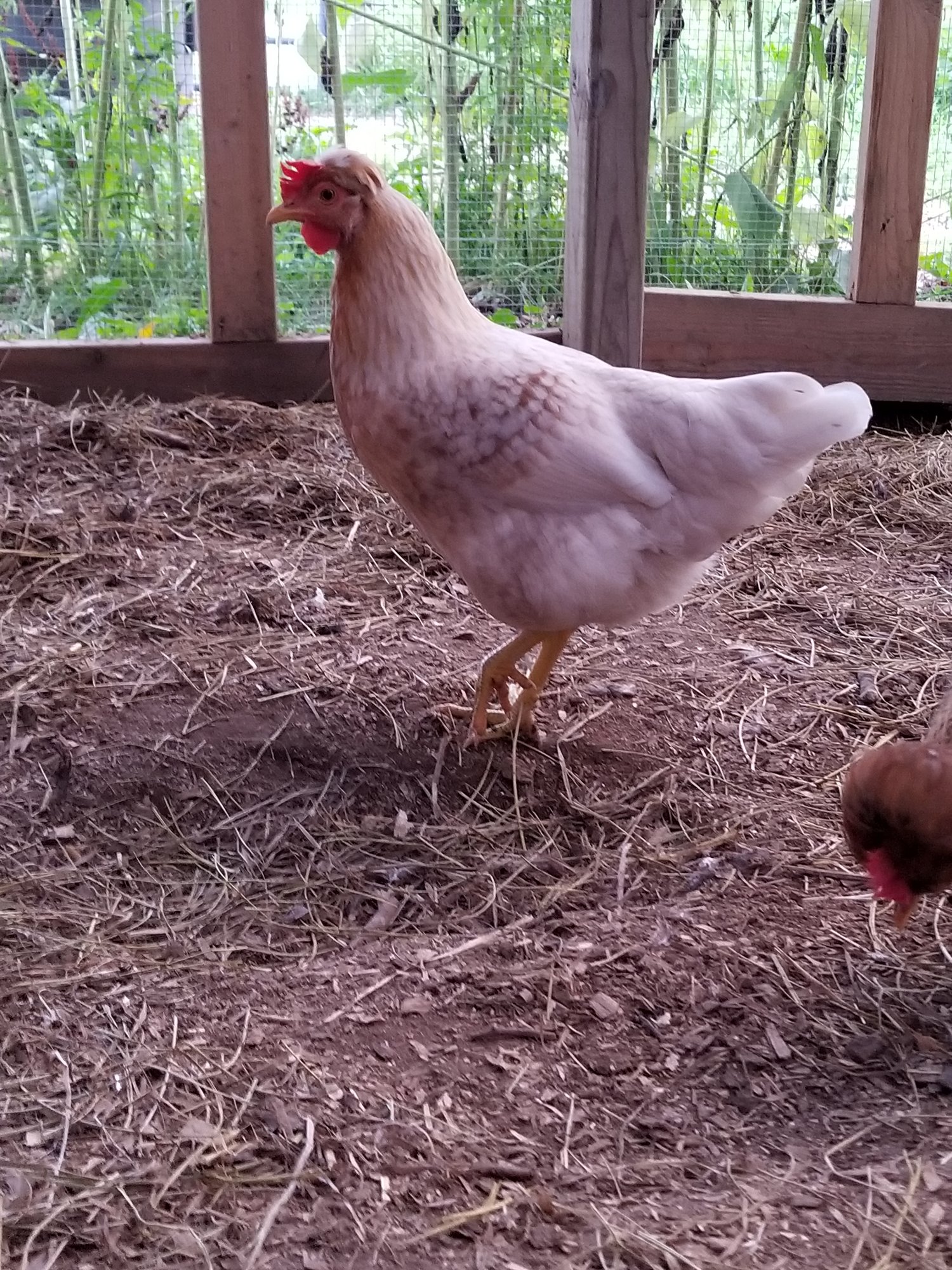 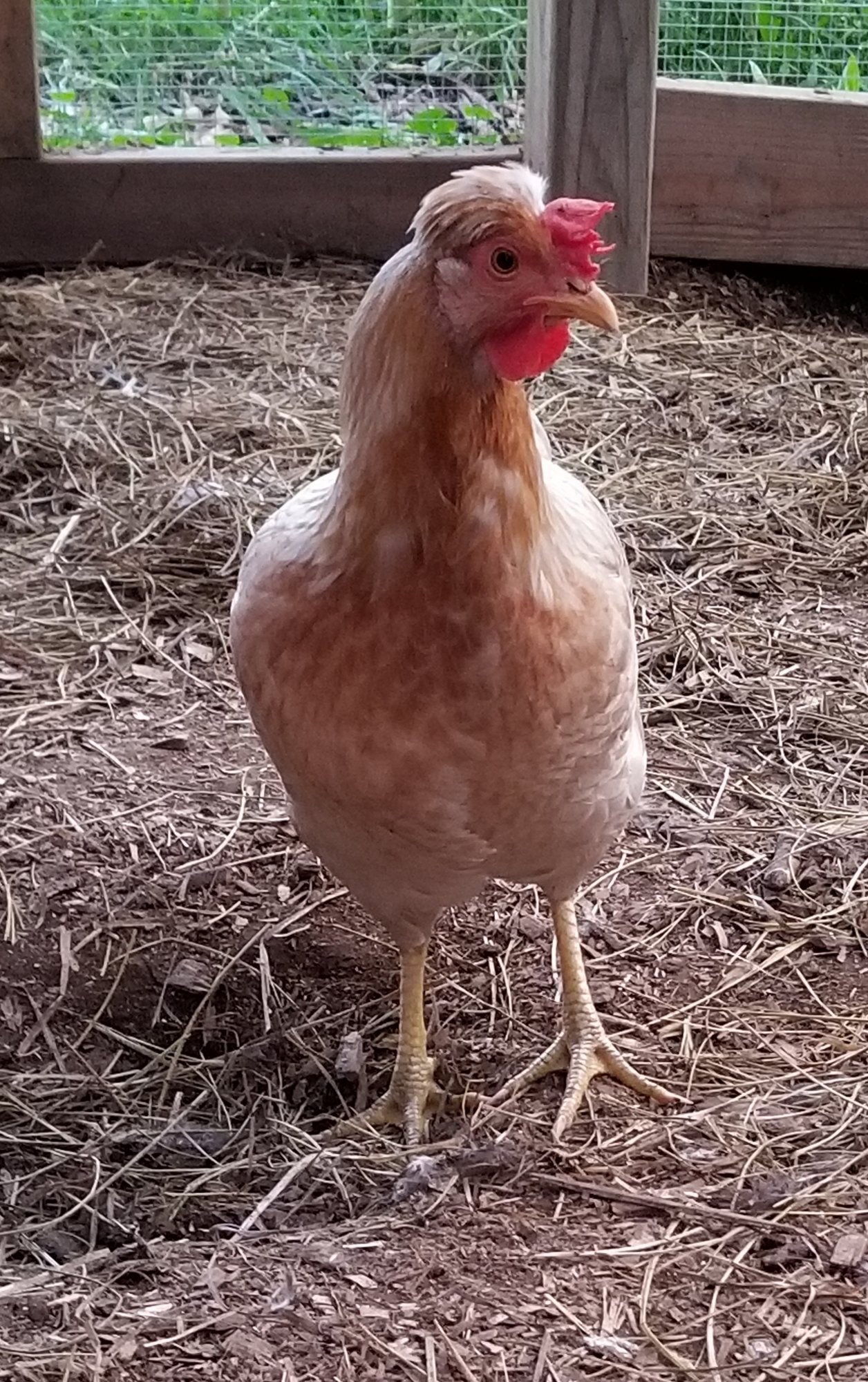 
She doesnt look recessive white. She almost puts me in the mind of splash. Or like leaky dominant white. But both of those things are impossible if she came from Cream Legbars. If you have a facebook there is a group called poultry colors and genetics. Request to be added to the group. I would try posting there to see what explanation they can come up with.

kfelton0002 said:
She doesnt look recessive white. She almost puts me in the mind of splash. Or like leaky dominant white. But both of those things are impossible if she came from Cream Legbars. If you have a facebook there is a group called poultry colors and genetics. Request to be added to the group. I would try posting there to see what explanation they can come up with.
Click to expand...

I'll try to find a minute to do that thank you.

Interesting, I expected that everyone else would know what she was. Her egg was blue and matched the others. She sure looks like a CL to me except the color. She's a size match, matured at the same rate etc. I don't know much about different leakage presentations but she's perfectly uniform.

She is Red Pyle.

GaryDean26 said:
She is Red Pyle.
Click to expand...

Red Pyle Crested legbar? I didn't know that existed. What should I do with her?

Red Pyle is not an established color in Legbars. Never the less that is what color she is. For a chicken to be a pure breed they must meet the standard for that breed/variety and so must their parent and grandparents. This pullet is a sport, a thrown back, or a mix. She doesn't match the color of her parents. She would not fit any standard for establish varieties of the Legbar. Put her in laying flock and let her lay eggs.
Last edited: Aug 13, 2018