We got 8 buff orpington pullets in March of 2018 from family farm and home.
I believe they get their chicks from Townline hatchery in Michigan.
It's October 2019 and they are about 1.5 years old now.
I have noticed that out of the 8 pullets a few seem really small. Built like a leghorn.
When I look up photos of buff orpingtons on google they look really big.
They are suppose to have a big fluffy bodies good for brooding and raising baby chicks.
Well most of our hatchery buff orpingtons don't have that at all.
They don't go broody either.
My question is
What are the hatcheries doing to make them so much different from the heritage stock?
Do they mix them leghorn or something?
I attched a photo for reference. 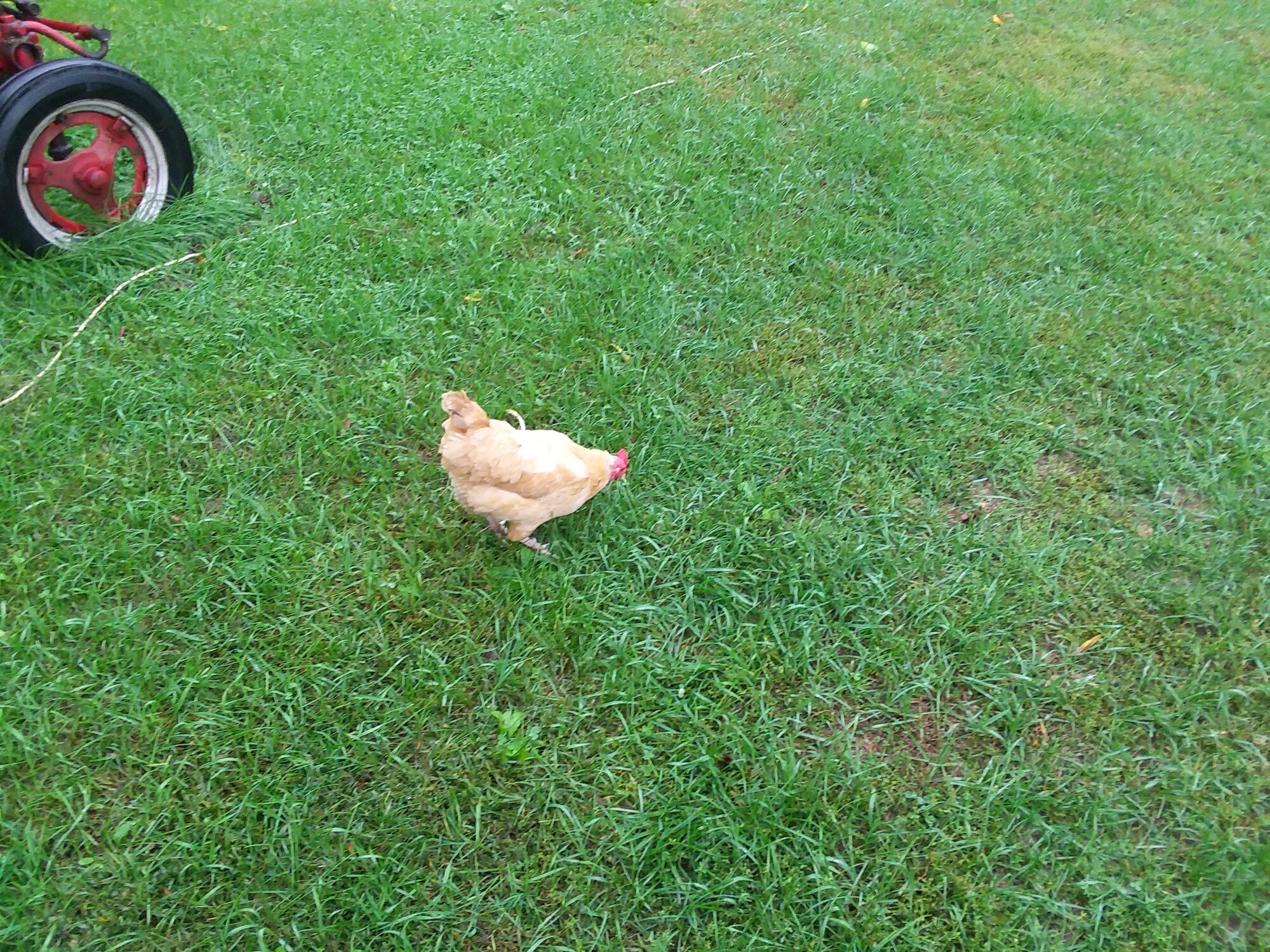 Hatcheries breed for quantity, not quality. It is not profitable to selectively breed their birds to the American Poultry Association's Standard of Perfection. Like most businesses in this economy it is about the profit they make. So long as the bird mostly looks like it should and people continue to buy them there's no reason for the hatcheries to change their practices.

Each hatchery has its own people deciding which birds get to breed so you can get differences from that. Each hatchery has its own business practices so there can be differences in what they do. But most follow a certain general practice. Most of the people selecting which chickens get to breed have a degree in poultry science, including genetics. They select which chickens make it to the breeding pens by looking at the SOP to a certain degree. They want their birds to represent the breed but they are not out to breed grand champion prize winners. They are out to sell mass market chicks at mass market prices. Most use the pen breeding method. That's where they might put 20 roosters in one pen with 200 hens. These mate randomly, they do not control which rooster mates with which hen. That's not how people that breed grand champion chickens work.

There is actually more difference in so-called "breeders" than there are in hatcheries. Each breeder has their own goals, which can vary. Some are more knowledgeable than others. Some breeders are out to win a grand prize, which is not easy by the way. They carefully breed certain roosters with one or two certain hens to give them the best chance of a champion. Nothing random about that breeding. Some even have different lines depending on whether they are trying for a male champion or a female champion. The same flock will not always produce both. Many are only looking at what the judge sees. The judge will not see whether a hen goes broody or not or what color of egg the hen lays so these breed qualities may not be very important to them.

You have a few breeders that breed to win grand prizes but also breed for the characteristics the judge doesn't see, Very few of these. If you go to a heritage site they will often list certain breeds as endangered even though a lot of people are breeding that breed for show. What they are talking about in these cases are the things a judge doesn't see.

You go all the way to people that get chickens from hatcheries and never see an SOP. They still sell their birds as purebreds. Hatcheries often do a better job than some of these.

You have people that are a combination of all of these. Just because someone calls themselves a breeder doesn't mean a lot to me. You need to find someone that is breeding for what you want. If you are looking for a bird that fits the SOP you will not pay mass market prices for them. They don't operate in a way that they could afford that.

I have never gotten chicks from Towline so I can't comment on them from experience. But then you believe they may have gotten them from Towline. Doesn't sound like you are sure. Are you sure they didn't hatch those pullets themselves, maybe from hens from Towline? If so, how well did they control which rooster was the father, was it even a Buff Orp? To me there are a few unknowns there.

Do hatcheries mix in other breeds with their flocks. I don't own a hatchery or work at one so I can't speak from experience. It's possible some do, I try to never say never. But it doesn't make sense. If you bring in new blood to address genetic diversity issues, bring in more of the same breed from another source. If two flocks have been separated genetically for several generations that will have as much of an effect on genetic diversity as bringing in a totally different breed.

I don't know enough of the full backstory on those pullets to make an informed guess. There could be some questions on their breeding. If they were fed a relatively low protein diet, say they foraged for most of their feed instead of being fed a high-protein diet, they will not grow as large as a bird fed a showbird diet. Feathers may not be as thick either. A lot of a buff orps size is due to thick feathers. Some look like they really shrink during a heavy molt.

As far as going broody, if the hatchery or whoever is breeding them makes going broody a capital crime then broodiness can be bred out of them. That has happened to a lot of production breeds. Hatcheries are in the business of hatching eggs with an incubator, not with broody hens. If you are breeding for show you are probably using an incubator as well. A broody hen is not laying eggs so she is not producing. But she is eating and drinking, plus require special handling to lessen her disruption on the rest of the flock. Some hatcheries or breeders put up with it since it is supposed to be a breed trait, but some won't. It is a business to take care of their families after all.

ColtHandorf said:
Hatcheries breed for quantity, not quality. It is not profitable to selectively breed their birds to the American Poultry Association's Standard of Perfection. Like most businesses in this economy it is about the profit they make. So long as the bird mostly looks like it should and people continue to buy them there's no reason for the hatcheries to change their practices.
Click to expand...

So they most likely don't mix other breeds like leghorn into their lines.
It's more about the selection process?

It's kind of like a puppy mill dog versus a well bred show dog. While they look like a purebred version of their breed, they may not have correct coat, or earset, or crooked legs, etc.

Like townchicks said, sometimes you loose the size of the body because they have to make a profit...

bigz1983 said:
So they most likely don't mix other breeds like leghorn into their lines.
It's more about the selection process?
Click to expand...

That's not entirely true. Sometimes they do cross other breeds in to increase fertility. So in a breed that is not very productive, they may cross something with the same color but a better layer, like a Buff Leghorn cockerel over Buff Orpington hens.

I have hatchery birds, and am usually happy with them. They all differ, as RR said already.
Selecting for SQ is often done at the expense of production qualities, especially egg laying ability. Sometime it's 'pretty is as pretty does' out there.
Generally good egglayers tend to be smaller than larger, and hatcheries want lots of eggs to produce many chicks. Breed standards want bigger size than many hatchery birds will be.
In my experience, individuals that are of very popular breeds and colors (like your BOs) are likely to be smaller from a hatchery than SQ. Less common breeds, where not so many are produced, may be closer to the standard. This is a sweeping generalization, so won't always be true by any means.
Unless you plan to show your birds, it really doesn't matter anyway.
The two times that I got show breeder birds, things didn't go all that well. The birds were beautiful, but not so productive.
Mary

ColtHandorf said:
That's not entirely true. Sometimes they do cross other breeds in to increase fertility. So in a breed that is not very productive, they may cross something with the same color but a better layer, like a Buff Leghorn cockerel over Buff Orpington hens.
Click to expand...

Any hatch of chicks, from the same parents, will vary a bit in size and structure. Then selecting the breeders, especially which roosters are used, determines future trends in their offspring. Selecting for good egg production tends to select away from large size. Also, the chickens will tend to return to a more 'natural' type, which is smaller, unless humans deliberately select with the breed standard in mind.
Mary

Chick Without A Tail & Copper On Cochin??