One of my flocks has two d'Uccle mix sisters who will be two years old this coming May. They are nearly identical and have always laid identical eggs. They each lay almost every day and I have no way of knowing who laid what egg unless I happen to see them laying, and I've only ever seen that once.

I've never had problems with either of them until this laying season. Occasionally I'd find the tiniest speck of blood on any of my hens' eggs, which I know is normal. The problems started about three weeks to a month ago, with one of the d'Uccle mixes. Early to mid-February, I got an egg out of that pen that was covered in blood on one side. I assumed maybe her vent had to re-adjust to laying after being off for the winter, so I didn't think much of it.

It's still been happening, with increasing frequency. After the first bloody egg, it was about ten or so days before I found the next one. Then I got another bloody egg about five days after that. Now I'm getting a bloody egg every two or three days, and the amount of blood is increasing.

I guess it's possible that both d'Uccle mix hens are doing it, but when I get two eggs a day between the two of them, only one is bloody. The bloody eggs are very, very slightly larger than the non-bloody ones. I don't know if it's connected, but one of these hens has become a little skinnier than the other, even though they always have food available.

I'm including pictures of the eggs I found today, which were laid over yesterday and today. I'm concerned that the amount of blood and the frequency are both increasing. 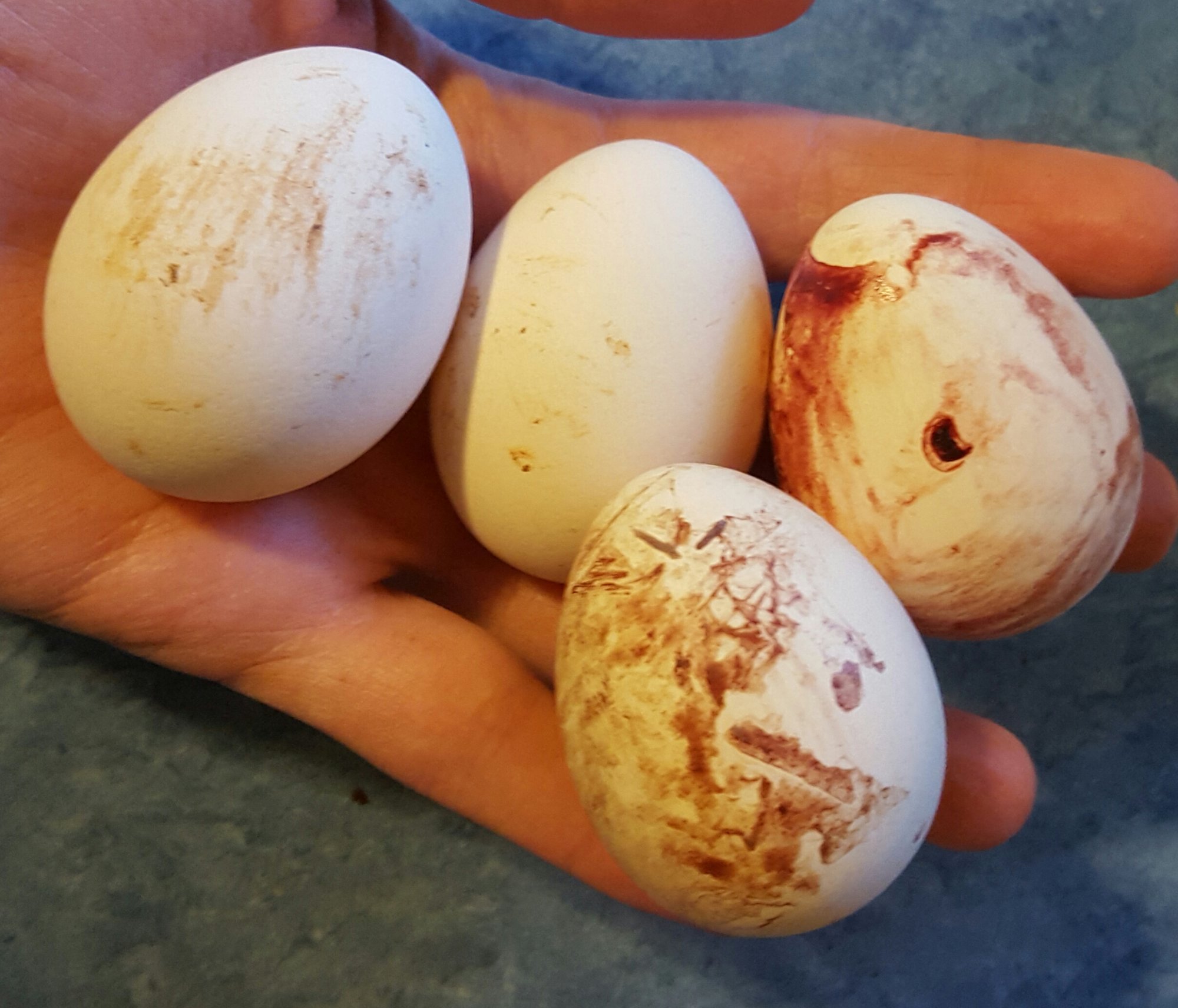 ^ the four eggs from today and yesterday 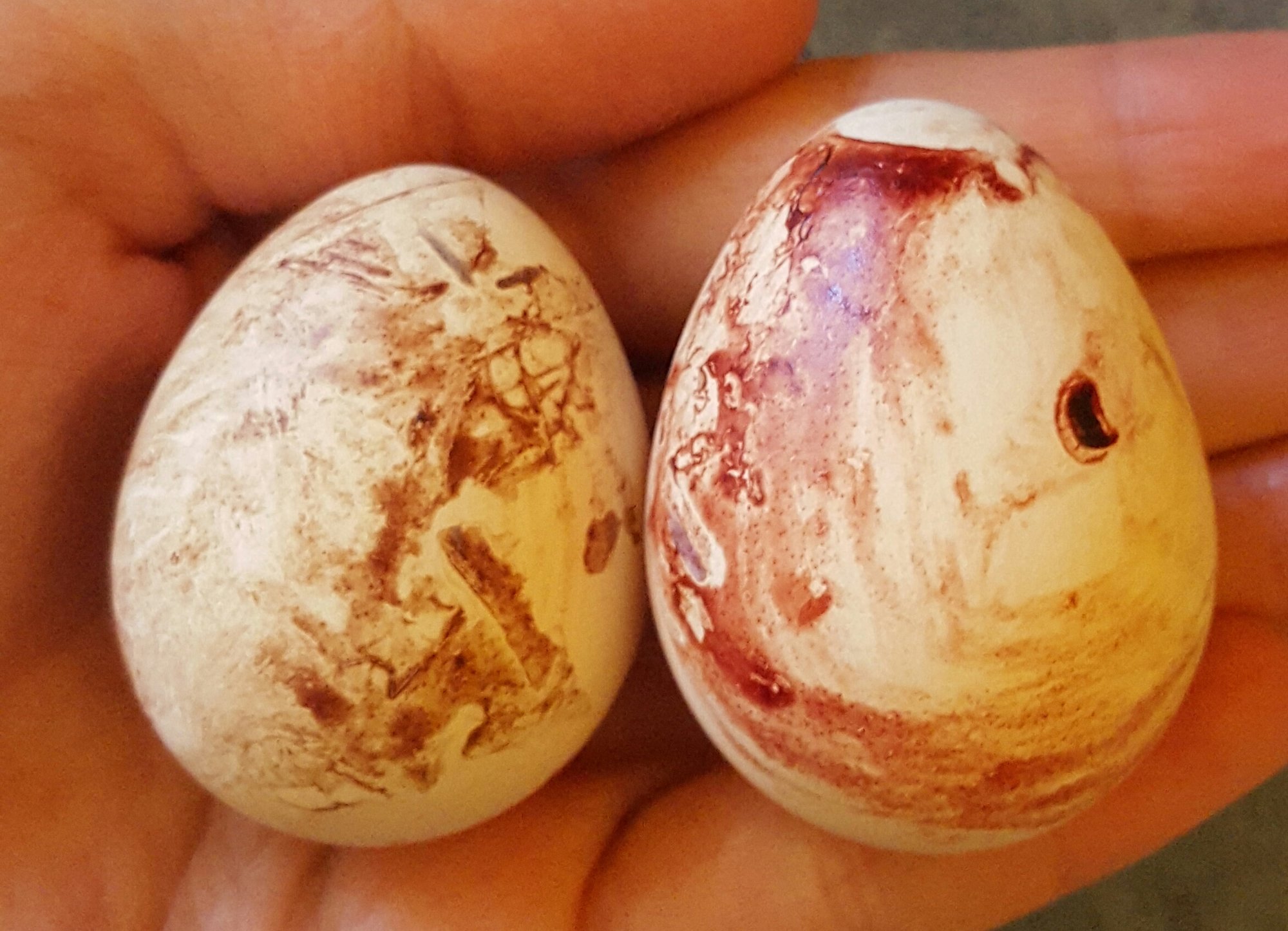 ^the bloody eggs; the one on the right is the worst one yet 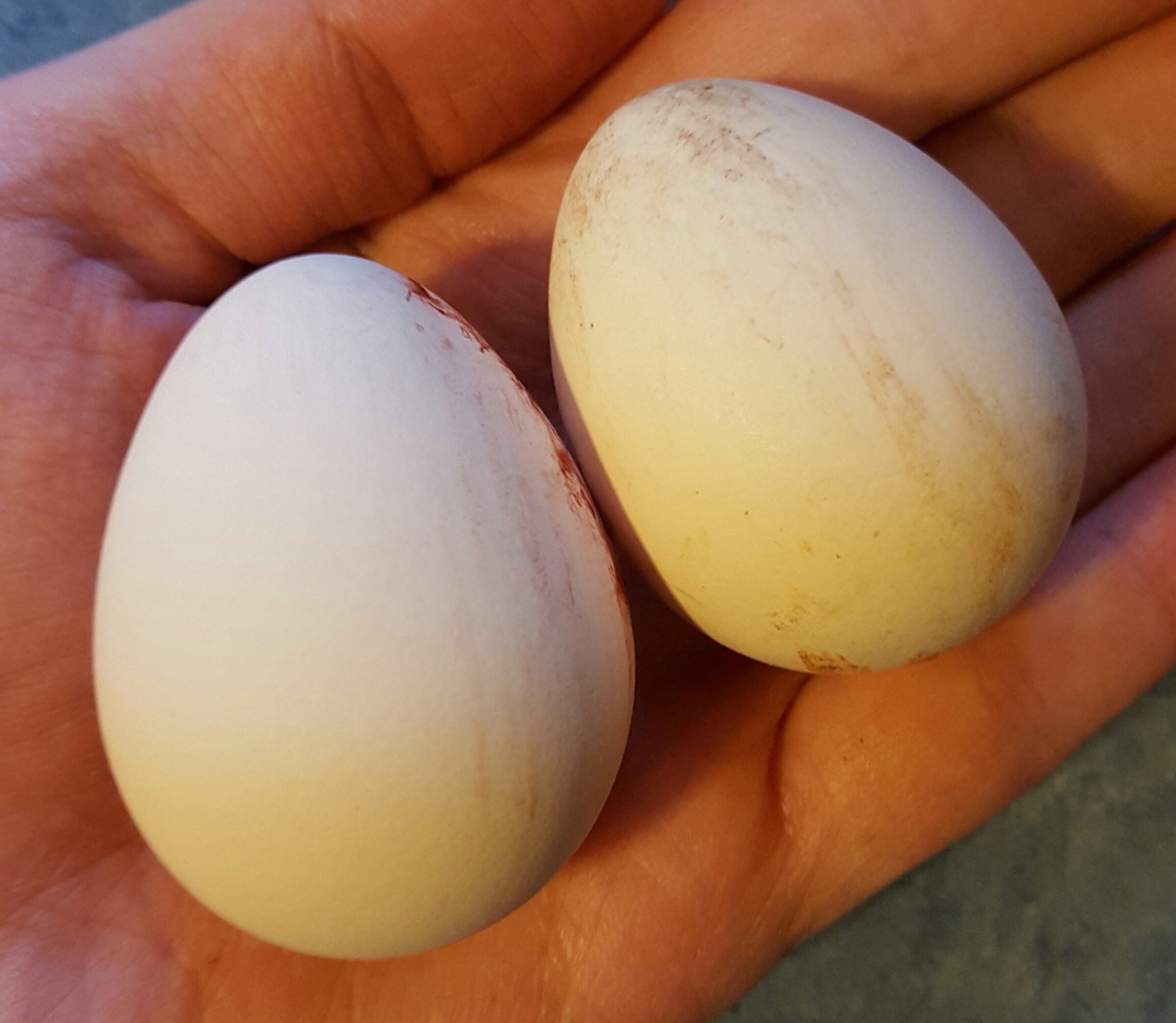 Can anyone tell what the problem may be?

That does look excessive, have you checked their vents for wounds?

oldhenlikesdogs said:
That does look excessive, have you checked their vents for wounds?
Click to expand...

None that I can see. The hens are completely wild. I can't catch them and thoroughly inspect, but if I sit on the ground and watch them for a while, I don't see any wounds near their vents. They're acting completely fine, and I don't see the others picking at them, like they sometimes do with wounds.

Hopefully it starts to lessen. Blood on eggs like that is generally from tissue stretching out. It generally doesn't continue for a long time, and I don't think there's anything you can do to help it if it's coming from inside.

I would wait until they go to roost tonight, and then remove one to a dog crate with bedding, and food/water. Then tomorrow if both lay you should be able to tell which is which. The you could use a leg band or mark her to know which is which.
The one who lays larger eggs may have some genetics from a large egg layer. She could be at risk for egg binding or prolapsed vent. I would give her some Poultry NutriDrench or Poultry Cell 1 ml daily, and besides vitamins, those contain a little iron which may help prevent sny anemia.
I don’t know how one could stop the large eggs causing blood, but at least you can watch for any problems.

Can you catch them at night when they’re roosted to examine their vents? You mentioning of them loosing weight might have mites infestation.

Spartan22 said:
Can you catch them at night when they’re roosted to examine their vents? You mentioning of them loosing weight might have mites infestation.
Click to expand...

Yes, they are easily handled when you get them off the roost in the dark. That is when many give medications or worm, and you can also check for mites and lice, or do various treatments.

One hen had bloody vent and other has bloody diarrhea with probably worm! Help!
5 6 7