Hello! I have included many photos at the bottom.

I have a two and one quarter year old Red Sex Link (named Ariana) who has always laid enormous hard-shelled eggs. In the last two months, however, she has laid continually worse eggs. In mid-April, she started every two days or so laying eggs that look hard-shelled, but when I picked them up, my thumb broke the shells. Now, in June, I open the nest box and there is a little paper-thin "skin" next to a pile of wet egg. None of the rest of my flock has problems with their eggs. My adult flock eats Purina Nutrena Layer Pellets 16%. Every few days I force-feed Ariana crushed oyster shells as a calcium supplement. She won't eat them if I don't shove them down her throat. In the beginning, this seemed to make a difference, but now it doesn't.

Ariana has never moulted in her entire life. When we bought her as a chick in April, 2015, as soon as she was fully grown, I trimmed her wings as well as the other hens' wings. I haven't since. Even now, She still has those exact same trimmed wing feathers. All her feathers are extremely frayed, being the same feathers she's had her whole life. I tried to pull one out to take a picture, and the shaft literally pulled apart. her back is covered with bent/snapped in half feathers. The really disturbing part, however, is that she has no pin feathers anywhere on her body. she's breaking feathers and losing them, but not growing any back.

Suggestions for how to get her to grow back feathers and get hard-shelled eggs would be
much appreciated!! Thank you in advance! 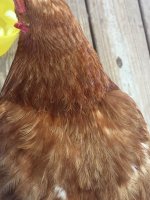 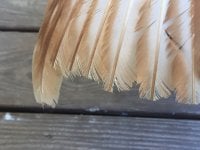 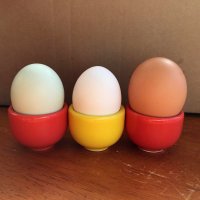 Ariana's original eggs. Her's is on the right. 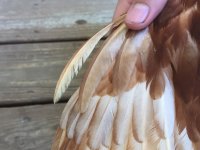 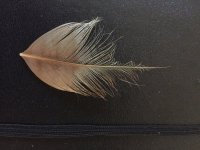 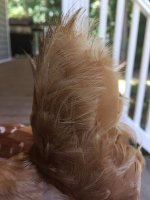 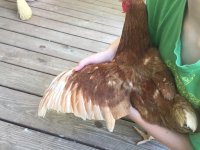 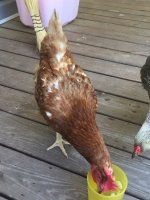 A small county in Virginia

I'm not sure why she hasn't molted, but I know about the egg problem. I have one red sex link, she's 2 years old and has also started to lay thin shelled eggs. I've don't research, and I believe it's because RSL hens were breed for high production, that didn't last long, so they lay huge eggs, but after a while their production goes downhill. I don't think there's really anything that can be done

Thank you. I'm starting to think so too. I just don't want her to be in pain or eggbound or something.

Check her over well for any signs of lice/mites.

Provide her with extra calcium. Oyster shells are good, but she does have to process them in order to get the calcium.

Try a more direct route of Calcium:
Don't overdo calcium, as soon as you begin to see hard shelled eggs, stop the extra calcium and see how it goes.

She most likely would benefit from some poultry vitamins a couple of times a week as well.

For not molting, some hens miss their first year of molt. Broken, ragged feathers won't be replaced until she goes through a molt. If the shaft is still in the skin, you won't see any new growth - molting those will be expelled. Provide her with some extra protein like egg, tuna, beef liver, etc. (a great treat for all - mine love hard boiled egg).

If extra calcium, vitamins and protein don't correct her egg issues, it's possible since she is a production breed (RSL) you may be seeing the beginnings of reproductive disorders (Egg Yolk Peritonitis, Ascites, cancer, tumors) which seem to be common.

Let us know how she is doing.

I did check her for mites, and she did not have any mite eggs on the base of her feather shafts, nor did I see any mites. I wormed the flock around October of 2016, so there couldn't be any worms eating calcium or anything.

I was afraid to try human supplements, because I didn't know how much to give, but I'll try these dosages.

You said:
If extra calcium, vitamins and protein don't correct her egg issues, it's possible since she is a production breed (RSL) you may be seeing the beginnings of reproductive disorders (Egg Yolk Peritonitis, Ascites, cancer, tumors) which seem to be common.

Are these diseases/disorders fatal? Is there any home remedy for them not involving a vet? Apart from the egg and feather issue, she does not appear injured or weak at all.

Aryetheral Waalburgus said:
Thank you so much!
Are these diseases/disorders fatal? Is there any home remedy for them not involving a vet? Apart from the egg and feather issue, she does not appear injured or weak at all.
Click to expand...

There's so many things that can go wrong - some symptoms overlap, so it can be hard to know without a vet. But a hen that is suffering from any these will be lethargic, go off feed, lose weight, sometimes have a swollen/distended or fluid filled abdomen, stop laying, have difficulty breathing, sometimes will go lame - she would be obviously ill.

The best thing is to try vitamins and extra calcium to see if there is any marked improvement. If she is eating and drinking well - just keep an eye on her.

I'll start giving her vitamins and calcium supplement and see how it goes. She is not at all acting sick and it's been a few months since the eggs started being bad, so I hope it's not a disease.

Okay, so I started giving hera half-pill daily of equate Calcium 600+D3+Minerals, which has 600mg of calcium per whole pill. Also, I've added durvet VITAMINS and electrolytes for poultry to their water. You can see improvement in Ariana's eggs, but NOT much. Her eggs used to look like someone had popped a water balloon in the nest-box and left the skin there. Now, there's a paper-thin eggshell in the shape of an egg, but with the top broken by other hens, or just by it's own weight. I'm not sure if I should give more of the pill, because I'm worried that she'll get to much calcium.

I'm glad to hear the eggs are improving

Getting a "whole" egg out is much better, the concern of them being so soft and/or coming out partially "broken" is infection - so whole is great .

Personally, I would not increase the calcium - like you, I would be worried giving too much.

She may have a shell gland disorder and this is the best it will get - you just don't know.

Maybe she needs another worming? I have a 3 yr old hen who lays perfect eggs regularly. One day I noticed poop on her egg then the next day she laid a soft shelled egg. I wormed with Wazine-17 and her eggs since are perfect again... I know Wazine-17 only covers some types of worms but it was Sunday & all I had on hand.. I am waiting ten days to follow up Safeguard after the Wazine treatment. The other thing I noticed is she has is a bit of a poopy bum, not too bad but it is a symptom of worms. I know the Wazine helped some because the day after treatment I saw worms in her poop & her eggs returned to normal.

Frayed looking feathers and no eggs