How many chickens have you had total and how many lost?

I currently have 56 chickens and have had as many as 142 at one time about ten years ago. I have been raising them for over a half century and been fortunate to have only lost about a half dozen to predators with 5 lost to a neighbor's dog and 1 to a feral cat. I will say that there are a heck of a lot more wild predators now than there was when I began my lifelong hobby as a young lad. Back around 1970, I hardly ever saw a hawk and now they are like sparrows. Raccoons, opossums, skunks, coyotes, weasels, and the occassional cougar are often seen so the Rewilding of America program appears to be a real thing based on my observations.
Last edited: Aug 6, 2021

COCKMASTER3000 said:
How many total chickens have you/currently have and how many chickens have you lost to illness or predators? Don't include chickens slaughtered for meat, please. That is a controlled kill. We have owned a total of 24 chickens, We have lost 7 to predators and 2 to illnesses. Our ratio sucks. To be fair, We have moved to 3 different places with the chickens since owning them and we're about to get permanently situated now. We're about to build their permanent coop. Their current living situation is temporary and we've been reactionary to predators. That will finally change soon.

But to reassure my girlfriend who is worried about us losing so many beautiful hens, how many chickens how ya'll owned and how many have you lost? I am certain that things happen that are out of our control and that is part of the process. Thanks in advance for your responses.
Click to expand...

I had a lot of chickens growing up that I cared for but they were never really “mine.” We lost two roosters to a fox once, and five hens to a weasel. But that was more because my parents failed to keep them safe and didn’t provide an adequate, predator-proof coop.
With my current flock, I started out with 4 senior hens that I adopted in 2018. One died a couple weeks after we got her, presumably because of age-related health issues that showed up over night. Another of the senior hens died last year, again because of a health issue related to her age. Both had been close to 10 years of age, at least. I now have 6 chickens- two young roosters, 2 senior hens, and two young hens. We’ve never lost any to predators, although we’ve had a couple close calls with a hawk and a neighborhood dog. Since those close calls, we only let them out of the enclosed run to free range when they can be supervised (either me or my husband will be out and about doing yard work, etc. so we can keep an eye on them.
I’ve always said everything likes to eat chickens. But if you do your part in providing a predator proof coop, feed them well, do your research, etc. you should have a happy, healthy flock and limited losses.

My flock started in June of 2019, when we brought five chicks home. That same year two of our hands died for unknown reasons. We didn’t end up with any roosters from our checks so we bought a rooster.

2020 we had a broody mama hatch out six chicks. Four ended up to be roosters we kept one. And the two pullets.

The beginning of this year we gave away both of our roosters because our neighbors were complaining. That’s when chicken math struck us.. my mom got a new job at tractor supply, and let’s just say working with the chicks is way too tempting for her. Long story short we got nine checks from tractor supply, two ducklings, hatched out three chicks, and got seven chicks from Wilco. We gave away the two ducklings that turned out to be drakes, and giveaway four roosters. I know I have a rooster for sure and I have suspicions about a second. So coming up to the end of the year we have exactly 20 chickens two roosters.

as you can tell chicken math was real for us this year, I want to test out my incubator next year and hatch out some more ducklings. anyway I hope you found this interesting that’s my number of chickens right now!!!

As I was an inexperienced buyer, the lady I bought all mine off to start with had problems, only 1 x now 9 year old survived from that lot. Then I bought a rooster and bred my own.
Lost 1 chick to predator.
Lost 5 chicks to mother hens killing them - those 2 mother hens are gone and will never mother again.
Lost 5 to unknown illnesses, possible genetic disorders.
Sold lots of chicks and couple of roosters.

My broodies will be on the job for more hatches coming up to Spring season (in Australia) to expand my flock. 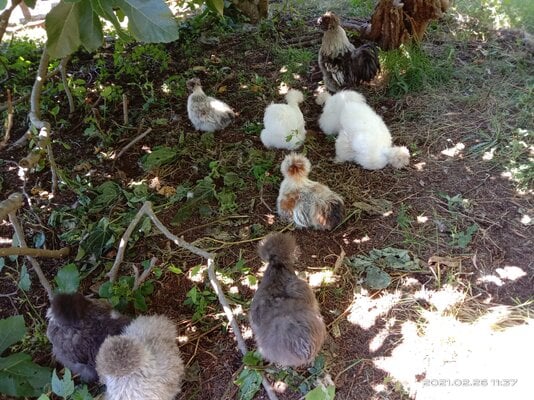 COCKMASTER3000 said:
How many total chickens have you/currently have and how many chickens have you lost to illness or predators? Don't include chickens slaughtered for meat, please. That is a controlled kill. We have owned a total of 24 chickens, We have lost 7 to predators and 2 to illnesses. Our ratio sucks. To be fair, We have moved to 3 different places with the chickens since owning them and we're about to get permanently situated now. We're about to build their permanent coop. Their current living situation is temporary and we've been reactionary to predators. That will finally change soon.

But to reassure my girlfriend who is worried about us losing so many beautiful hens, how many chickens how ya'll owned and how many have you lost? I am certain that things happen that are out of our control and that is part of the process. Thanks in advance for your responses.
Click to expand...

I started out buying 12 Wyandotte chicks and 5 jungle fowl chicks, a month or so later I saw chicks at the local hardware store and got 4 barred rock and 4 Australorps. 2 of the Wyandottes were roosters, 4 jungle fowl roosters, the rest are hens. 25 in total.

This was last year. Naturally I named them, noticed personalities and started treating them too much like pets.

At this point I've lost 6 of them, the first was Seven-of-Nine (well, seven of 25 really) I don't know why she died but I think she might have had either a broken or stuck egg because they'd just started laying at that point and she was walking funny. Partially my fault I think because I didn't recognize the symptoms due to inexperience and didn't try to treat her.

Momo the rooster was separated from the flock because he was causing issues with the other rooster, the pen I put him in wasn't secure enough and a racoon got him.

Lucy, one of the Australorps, hurt her leg somehow and despite nursing her for a while to see if she'd heal she ended up dying.

Phoebe, another Australorp, had a prolapsed cloaca and had a hole pecked in her butt, died a few weeks after Lucy so was a double wammy of death.

Caroline just dropped dead one day, was fine in the morning and when I went out to the coop at midday to check on them was laying there by the coop door.

Samantha, I don't know what happened with her. I thought she might have had a stuck egg, but couldn't feel anything. Tried treating her, she hung on for a few days and died, not sure exactly why.

But, a couple months ago, one of my girls hatched out two chicks that are half Wyandotte half jungle fowl, two roosters of course (like I need more), it'll be interesting to see how sturdy they are.

Based on my experience, I'd say that it's part of the process. I plan on collecting fertilized eggs next year and hatching out a few replacements, I suspect that over time they'll end up being stronger and live longer than their parents.

Now, all but the 4 jungle fowl roosters are allowed to free range during the day, so far no predator losses but I'm mentally prepared for that probability. They're happy roaming around and that's my main goal, make sure they have a happy life so if it's short they were still better off than they might have been otherwise.
B

I’ve had 42 and lost 13.
Adults:
1 illness
1 dog - our first and super sweet Cochin rooster
Chicks:
1 - failure to thrive after delivery
4 - disappeared
1 - snake, even though the chick was way too
6 - brooder trampling after their waterer leaked, even though there was high ground available (

5 were ones we hatched ourselves after the Roo died. )

And, as I write this, we have a white leghorn with difficulty breathing. She is less than a year old and just started laying last month. It’s possible she ate some moldy food

I have a fifteen chickens. Lost one right after hatching and lost a duckling from an illness. I've been lucky.

I started in September 2020
My flock is a generation flock but my highest number was 10.
Until 2 days ago, little Basil died from unknown causes.

Have had chickens here for 11 years. No idea how many chickens have come and gone in that time. Three weeks ago, if you had asked me, I would have said we've lost maybe half a dozen or so to predation, mostly to raccoons, one or two to coyotes, snd perhaps two to hawks. We processed several and had a lot just die of old age. But my faithful little Sheltie is getting old and is spending her days in the house instead of on patrol, and while our birds were out free-ranging a week or so ago, a coyote stole my good BJG rooster and four or five of my hens. So we're not free-ranging any more. It's our biggest loss ever. We've not had illness; we keep a closed flock. We did lose one hen to a prolapsed vent; we culled her.

I would say to you and your girl friend that there is a fairly steep learning curve when you first start keeping chickens. We all make mistakes, and our mistakes tend to be costly in terms of chickens' lives. But we try to learn quickly from our mistakes and correct them as quickly as possible. The rewards are worth the effort.

There is such joy is keeping chickens. It took me a while to figure out what it is, but this is it for me: chickens are a bridge between wild and domestic animals. They aren't dogs or cats, they are BIRDS. Yet they feed at my feet, which cardinals and blue jays won't do. I love hearing them purr and cluck and cackle contentedly to one another and, yes, to me. It's such a homey sound. Hang in there, don't get discouraged. You'll do okay!

All of my chickens got killed
2 3

Should I put all roosters together or let them each have their own little flock?
2