How to deal with a persistent juvenile cooper's hawk?

Currently, I have 2 peafowl and 6 doves. A few months ago a cooper's hawk decided to pay an interesting visit to my yard in the late afternoon. He sat atop of an aviary I made(at that time holding my 2 peafowl), and would not leave until I chased it away. A second, third, and fourth time would be at the morning, when I kept my doves in the aviary; he circled around the aviary, and left after failing to get inside.

It's today that's the problem. He actually managed to get one of my doves. I usually let my doves out to fly as they please during the day, and today, since it was raining, I reasoned there would be even less of a threat, as birds wouldn't voluntarily fly a lot in the rain. However, I look outside and there was a hawk on the ground, eyeing my peafowl, and then after a few seconds it flew away. I didn't think much about it, since I reasoned my peafowl could fend for themselves, but then after another few minutes, I saw the hawk swooping down and catching one of my doves mid-flight as it tried to flee. There's a pile of feathers on the ground

after I rushed out. Well, now I'm missing a dove, and put all my birds in secure cages(took an hour for all the doves to come back

Since this hawk comes at irregular intervals at irregular times, but will continuously come here(5 times now within a month :/), there's no way I can avoid it really. And I can't kill, harm, or catch it because it's illegal here in Arizona. I'm at a loss of what to do. I can't keep my birds in a wire cage every day. Any suggestions would be appreciated!

I feel your pain. Cooper's hawks put me out of business. Every year they killed 80% of my young birds. I gave all of my pigeons away.

Put CDs ontop of your coop, and other reflective things in places. Get one of those owl decoys and move it frequently. There are other alarms and such I've heard of, beyond that there's not much you can do, other than set up netting, or use a chicken tractor.

docteurmccoy said:
Put CDs ontop of your coop, and other reflective things in places. Get one of those owl decoys and move it frequently. There are other alarms and such I've heard of, beyond that there's not much you can do, other than set up netting, or use a chicken tractor.
Click to expand...

I see. Thanks for the input. I'll try that.

So sorry for you loss. If you have the room and can build them a nice aviary that you can put them in and they can still fly around. Years ago I did that with my Pheasants. I had good netting covering it and I used some wood and made some tall T-posts to hold the netting up. Good luck...

You can try the owl decoy. 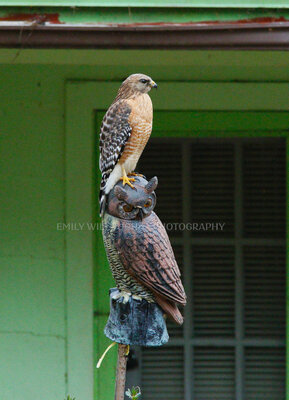 R
what am I missing about hawks?
2

C
Hawk attack - will it come back for more?
2