How to make the chicken pen predator proof?

Hey everyone I am adding another chicken pen to the property (its just a 10x10 wire dog kennel). How would I make it predator proof? And How would I go about making the bottom of the pen predator proof so predators can't dig thereselves into the pen?

Any info helps. Thanks.

I would put a singe strand of electric fence wire around the outside perimeter. I would use an insulator that extends 5 inches out; if you're concerned about digging put the wire about six inches off the ground. Use a strong fence charger, ground it well with a copper plated rod and keep the weeds off the fence.

Add 1-2 large, vigilant dogs to your yard, go to bed and get a good night's sleep and call me in the morning.

Id line the bottom few feet of the kennel with half inch galvanized hardware cloth. That keeps rats and snakes out. To keep things from digging under the fence, lay some 2 foot wide welded wire flat on the ground around perimeter of the kennel to keep critters from digging under. It never occurs to them to move back a few feet then dig. I have my pigeon coops set up like this and the only birds I use are to hawks when one gets out of the pen.

Other ideas out there. I'm always looking for new ways!

I really do not recommend making electric fencing your MAIN predator deterrent. Even if correctly installed and checked daily, which relatively few people do the first of those and hardly anyone does the second, it still fails occasionally for a variety of causes and predators can be real quick to notice. It *is* a good "cherry on top" of an already reasonably predatorproof setup.

IMO for most purposes an undiggable apron at least 18" wide (wider if you have known digging-predator problems), securely butted/attached to the outside foot of the run fence, is the most sensible option. People most commonly use HEAVY-gauge galvanized wire fence mesh, no larger than 2x4 mesh (there is really not all that much benefit to smaller mesh IMO and it usually involves smaller gauge wires which will rust thru faster, yes even if they are galvanized). Wire it to the base of the run fence, and turn the outer edge down a bit so it is not obvious to animals and won't catch on lawnmowers or peoples' feet; you can leave the wire exposed for grass to grow up through, or put something decorative atop it, or even cover it in turf, whatever. Alternatively you can use LARGE pieces of concrete rubble (e.g. from a broken up slab or sidewalk) or very large pavers.

An apron will not keep out rats, but then practically nothing *will* anyhow.

Alternatively you can bury the base of the run fence at least 18" into the ground, preferably deeper if you have known digging predators around. This is a HECK of a lot of work in most types of soil, especially if there are tree roots or rocks, and leaves you with no easy way of checking in future years to see how much the buried fence has rusted/weakened, and no easy way of replacing it if it *has*. And does not really offer meaningfully better protection against anything, unless you have a fine-mesh deeply buried fence which does give some extra discouragement to rats. (Who will probably get in anyway somewhere else, if they really want to).

So all in all I think the apron style digproofing makes the most sense, nearly always.

If the chainlink of your dogkennel is HIGH QUALITY, probably all it needs is something smaller mesh along the bottom 2-3' to prevent reach-through in either direction, which will also seal up those gaps that usually exist where there's curves in the frame at the corners. You may need to bolt on a wooden "frame" around the doorway to stop up those gaps, so the door is closing directly against the frame.

Note however that a lot of chainlink being sold these days, especially in prefab dog kennels, is really crappy stuff and even DOGS can rip through it, by pulling a hole open wide amongst the meshes. So, you have to look at your particular situation to decide how much to trust it.

Also remember that raccoons and possums, and some dogs/foxes, can climb real well and will go over the top of a 6' chainlink panel with ease. So either you need a top that will support heavy weight (of course some prefab kennels come with that option) or to lock the chickens into a secure house within the pen before nightfall, and hope for no daytime predators.

I hope that doesn't sound discouraging, it is not at all meant to be, because chainlink kennel panels usually make a GREAT run material. It is just a matter of *doing* the digproofing and smaller mesh added on the lower parts, and then deciding (same as with any other run) what your approach is going to be to the risk of things from above.

I have a 10 x 10 kennel. I put a hardware cloth apron along the bottom and welded wire on top. I don't have to worry much about predators around here, just the occasional coon or possom, which could wipe out my birds in one night. I am fairly certain they will not be able to get in my run.

Here is a shot from a week or so ago 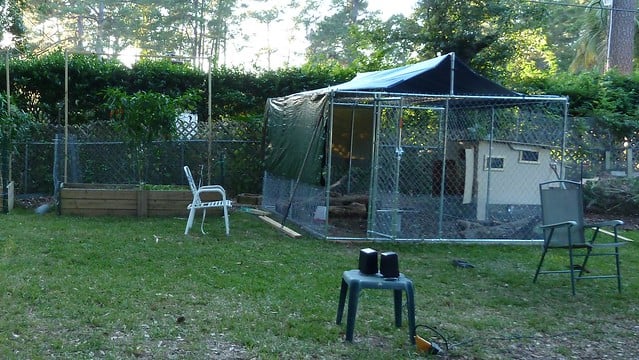 You can't see how the apron extends out from the bottom of the run but you can see it is attached a couple feet up from the bottom. It's to keep paws from reaching in and grabbing them.

You also can't see the welded wire on top of the run, I'll try to take some better pics later. I used cable ties to attach everything, and lots of it. I will add wire later here and there just for peace of mind.

I think the kennel runs are pretty easy to secure, you just attach wire to the chain links. You can attach wood or metal sheeting to fill in gaps by the door if you feel they are too large.

My run is one that has a continuous roll of linking attached to a frame, it's not the kind with chain linked panels.

THIS IS WHAT WE'RE DOING ABOUT PREDATION:

We've gone down 3'. It's worked for our first run, which is also roofed and uses templates as a barrier over the top. We're in a predator-rich zone- no rodents, no raptors or other carnivores, no breaches, fingers crossed.

Turn on every night after all the birds are in bed and off before they come out in the morning. We check the fence with a tester every evening to be sure that it is on and working properly.

Although our coops are like Ft. Knox with hardware cloth for the wire, we still added the protection of the electric fence. Since then we don't even have predators come around at night (according to our game camera).

My chicken and duck coops/run...I’d love to see yours!
2

Northern VA area. How deep should I predator proof?