I think my hen might have hatched 9 cockerels? Help?

My beloved Sebright hen Sam laid nine eggs and hatched every one of them. Except... all of them kinda look like boys to me.

They're 7 weeks old today (the pictures are from two days ago) and a number of them have started crowing, I've seen at least two attempt mating behavior, and they all still fight but not violently. (I don't put much stock in crowing tbh because Sam herself started crowing when she was about 4 weeks old and she still does it on rare occasions.) There was one that I picked up once and it was startled enough to go into the submission posture that usually indicates a hen.

Sam, although a Sebright, has had three male offspring *without* hen-feathering but most of these chicks look hen-feathered to me, so I focused mostly on their faces. Which may look weird because a few weeks back they started viciously attacking each other for unknown reasons. They've since calmed down.

I'm uploading a picture of each, even though there are a few that I am already dead certain are male. 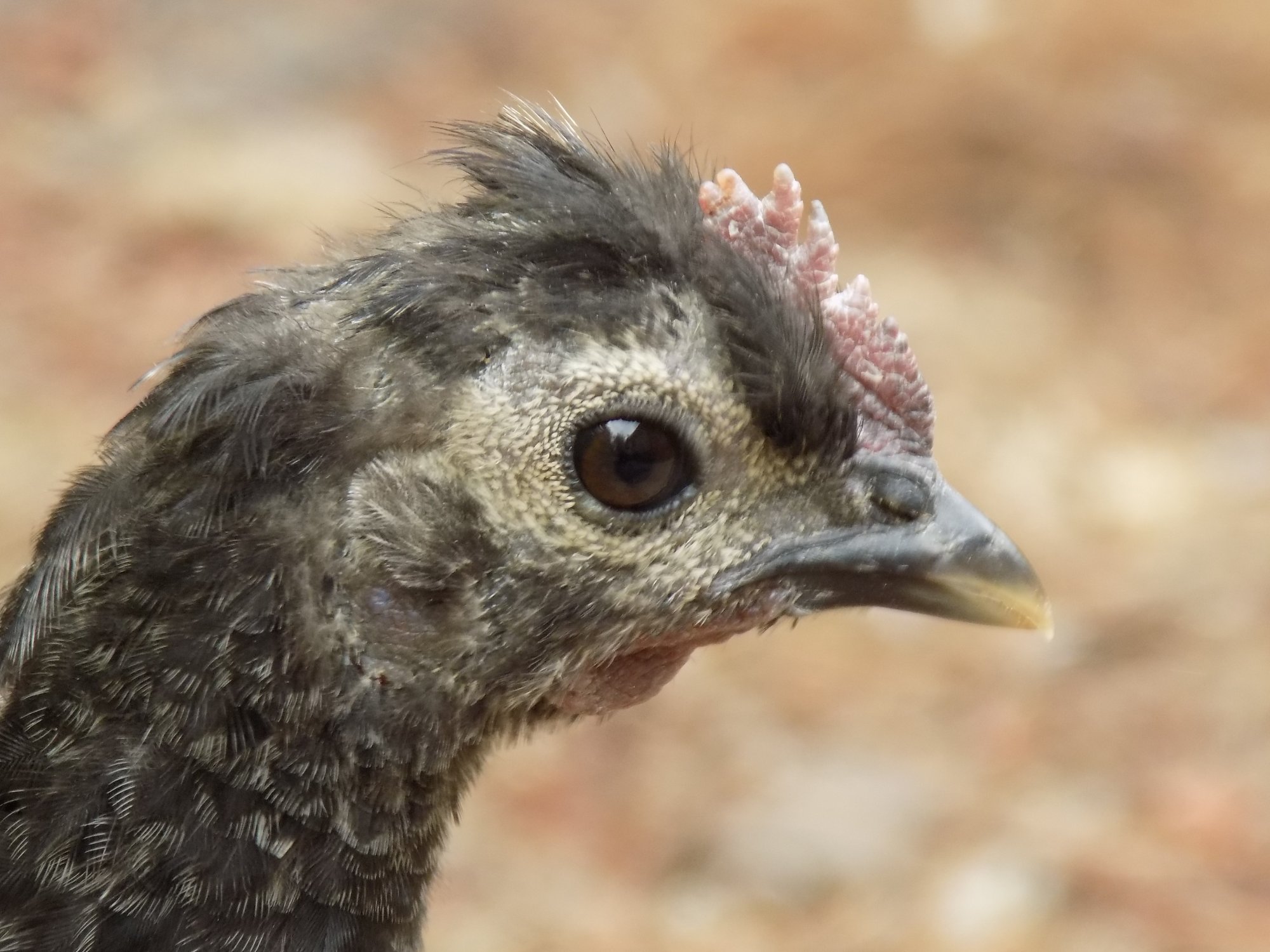 "Spectacles" - only one with Silkie-type dark skin (from father). Also the only one who is definitely growing sickle feathers. 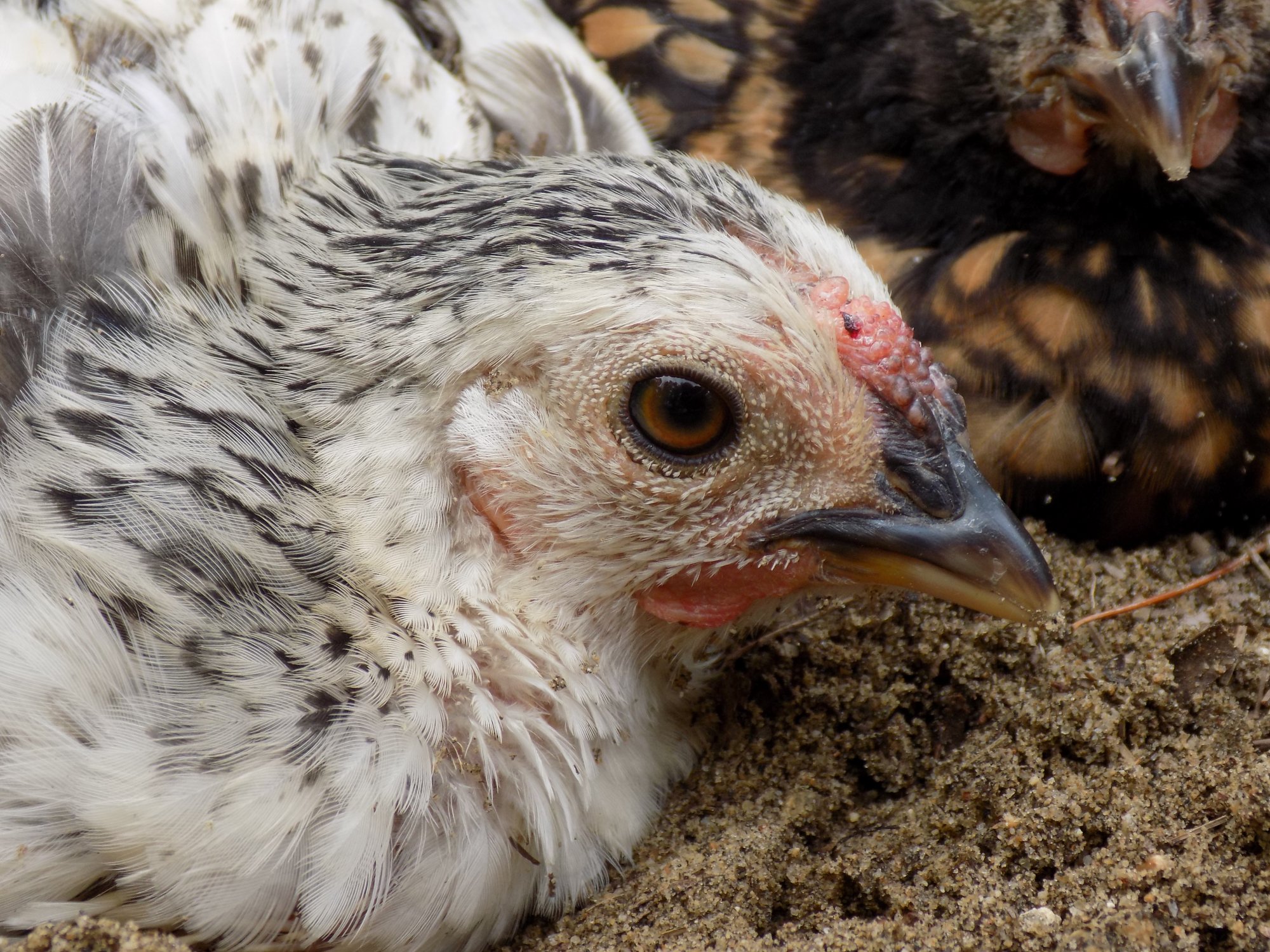 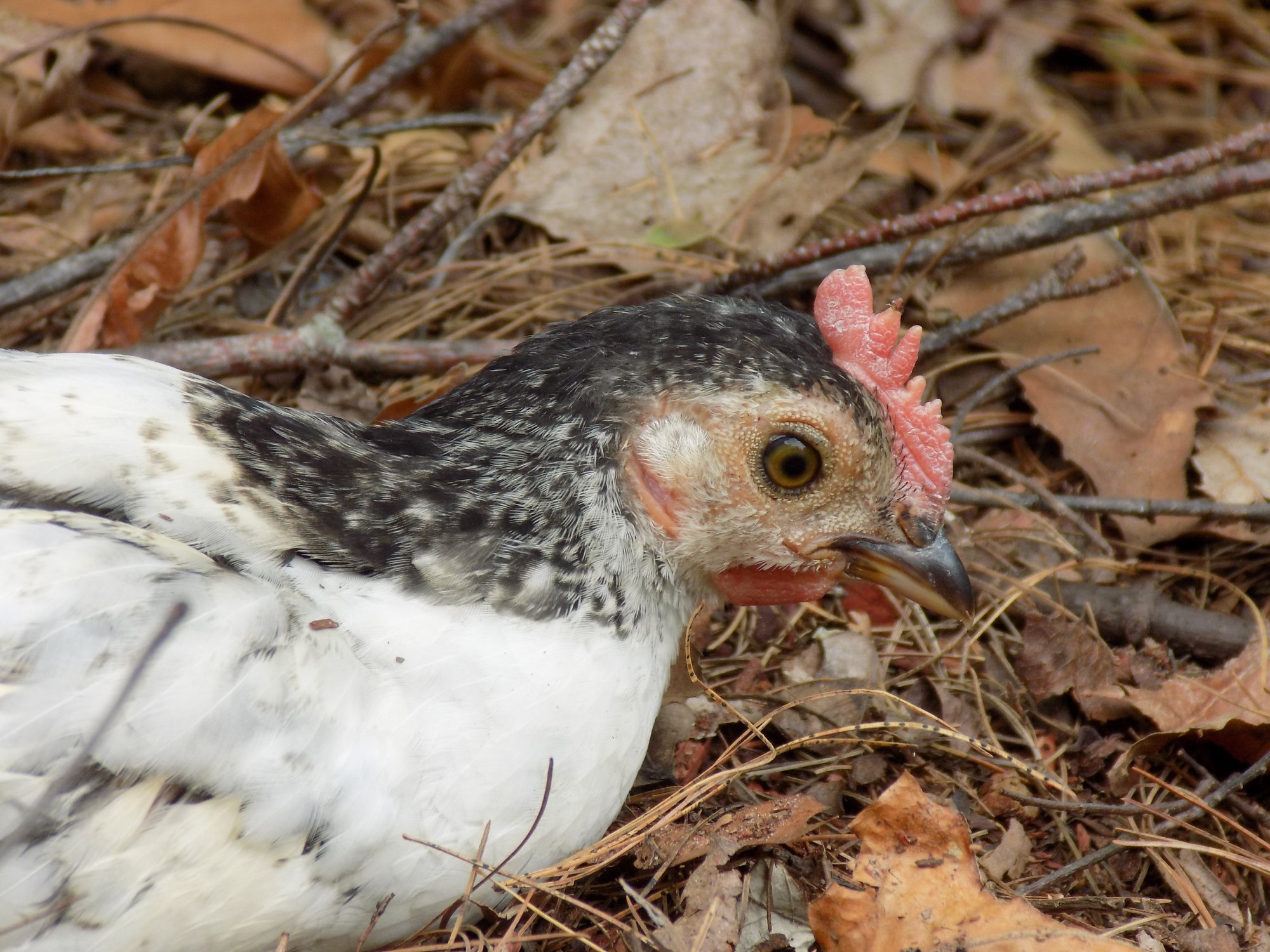 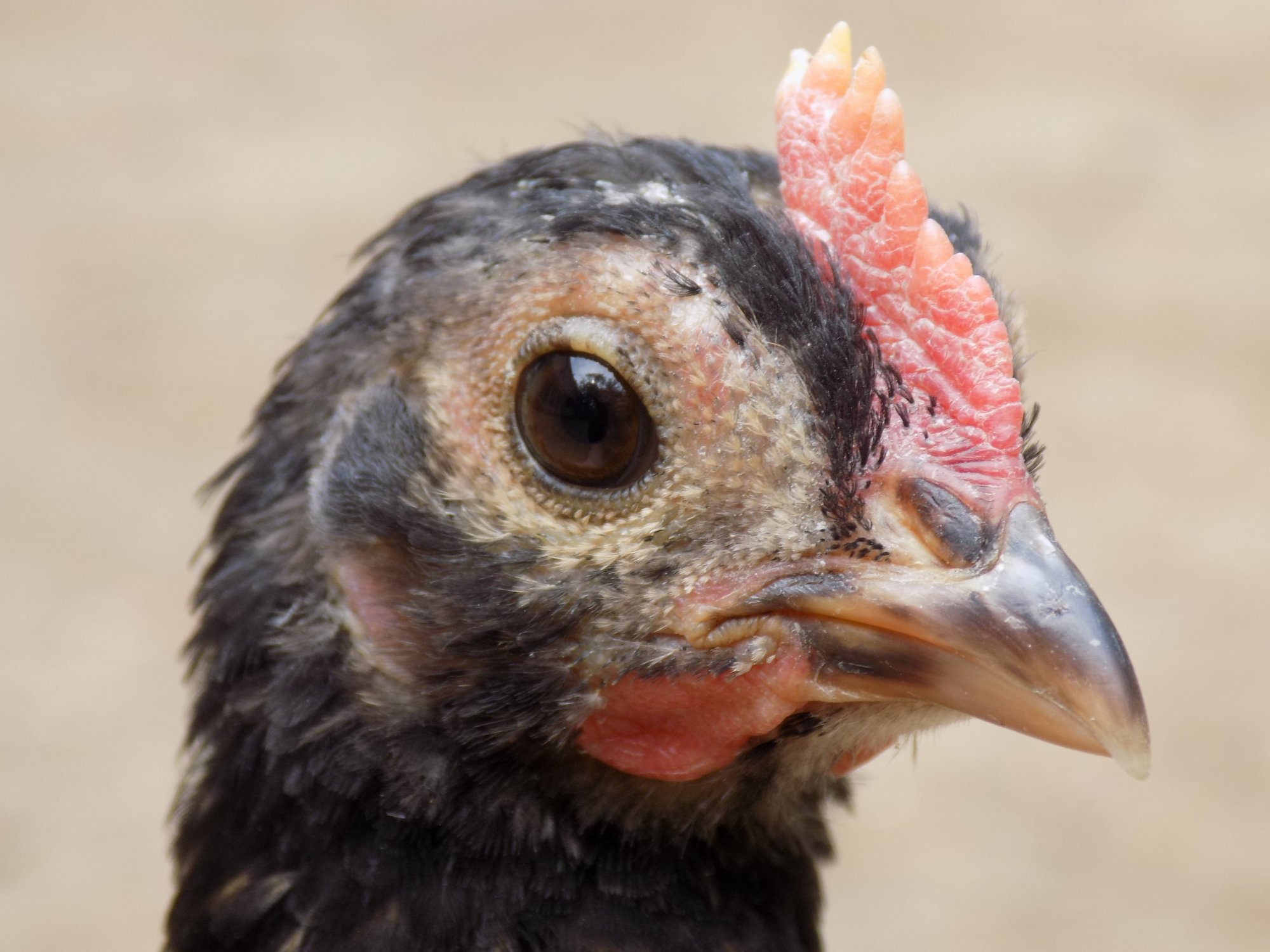 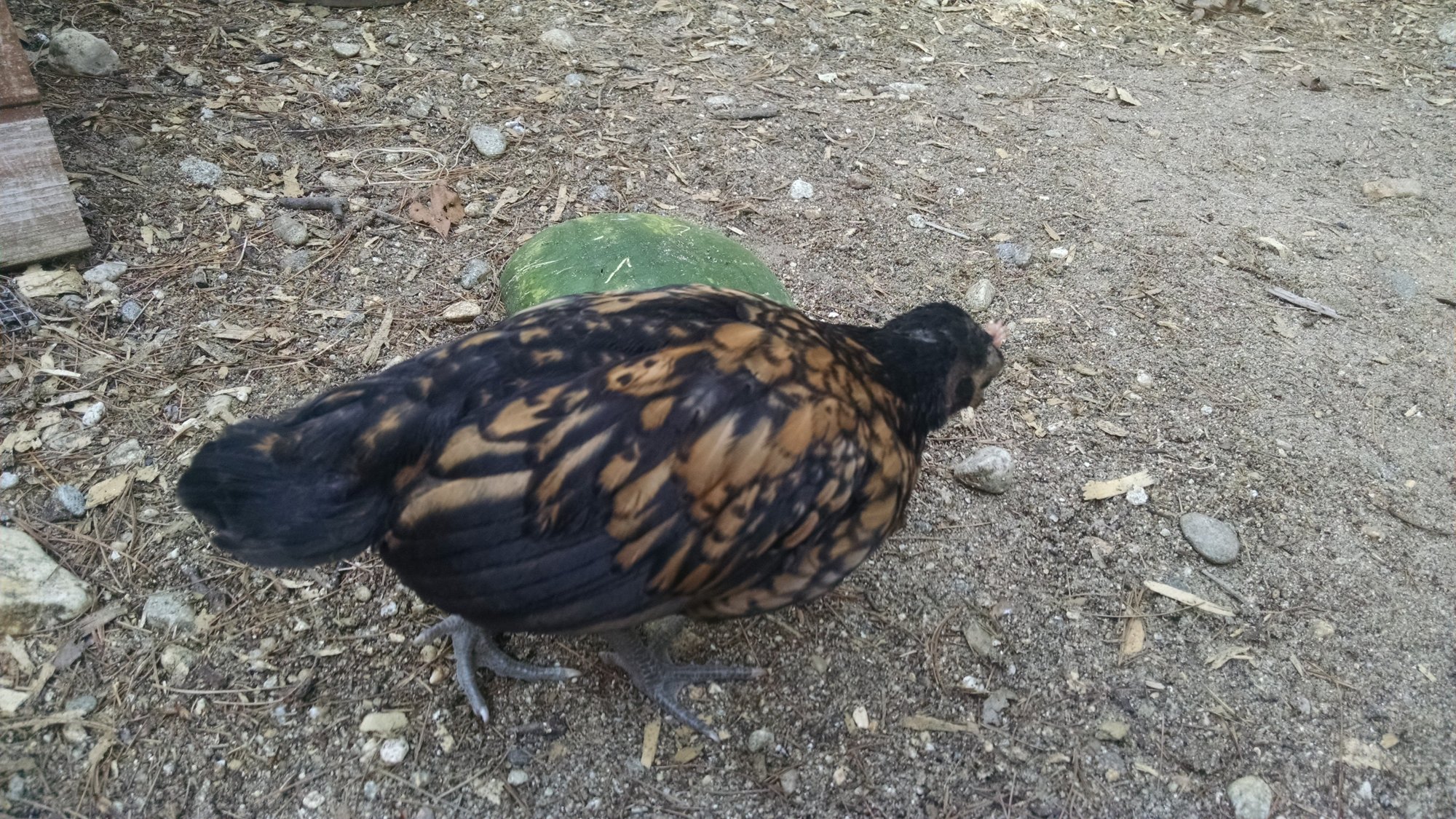 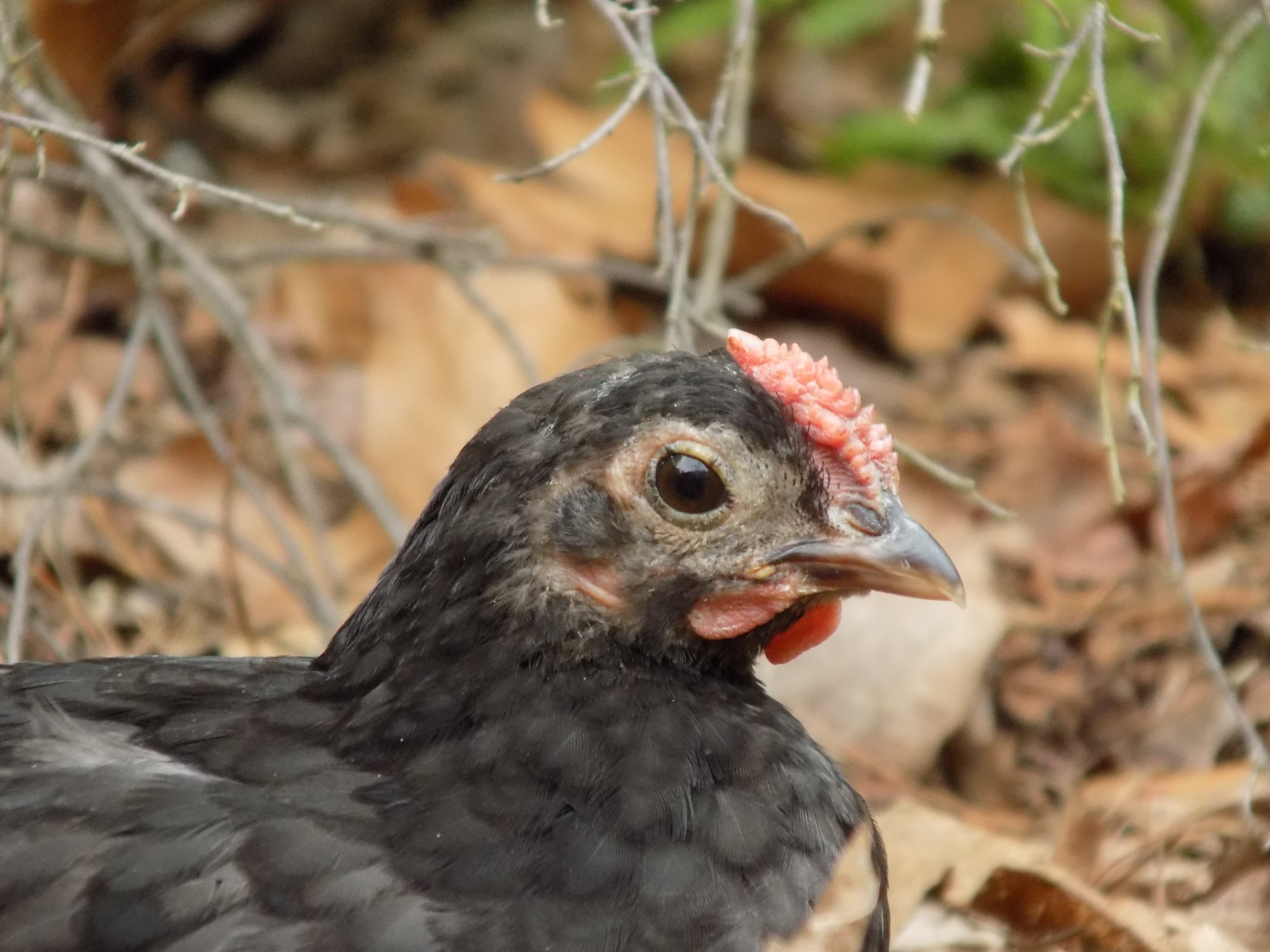 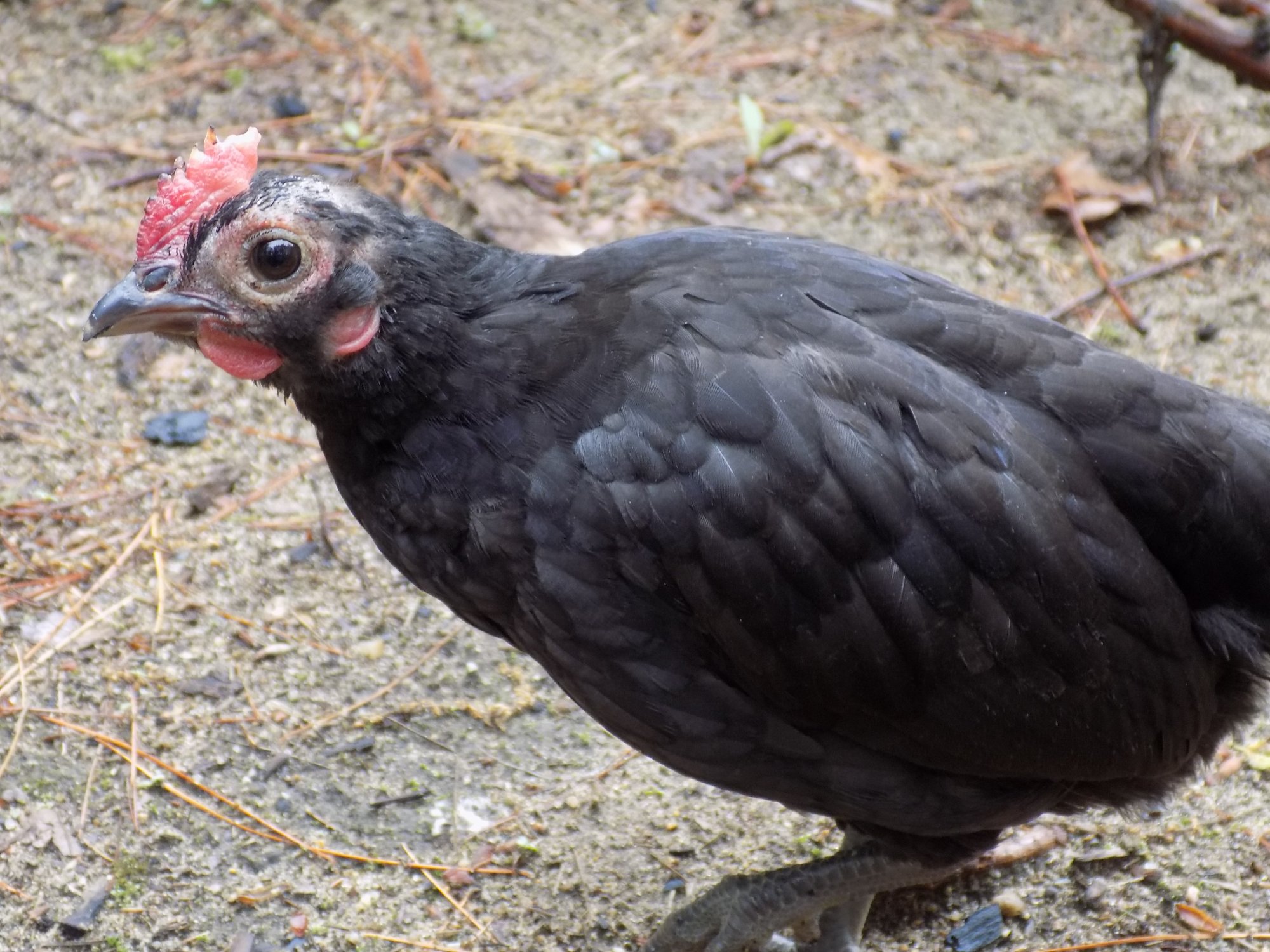 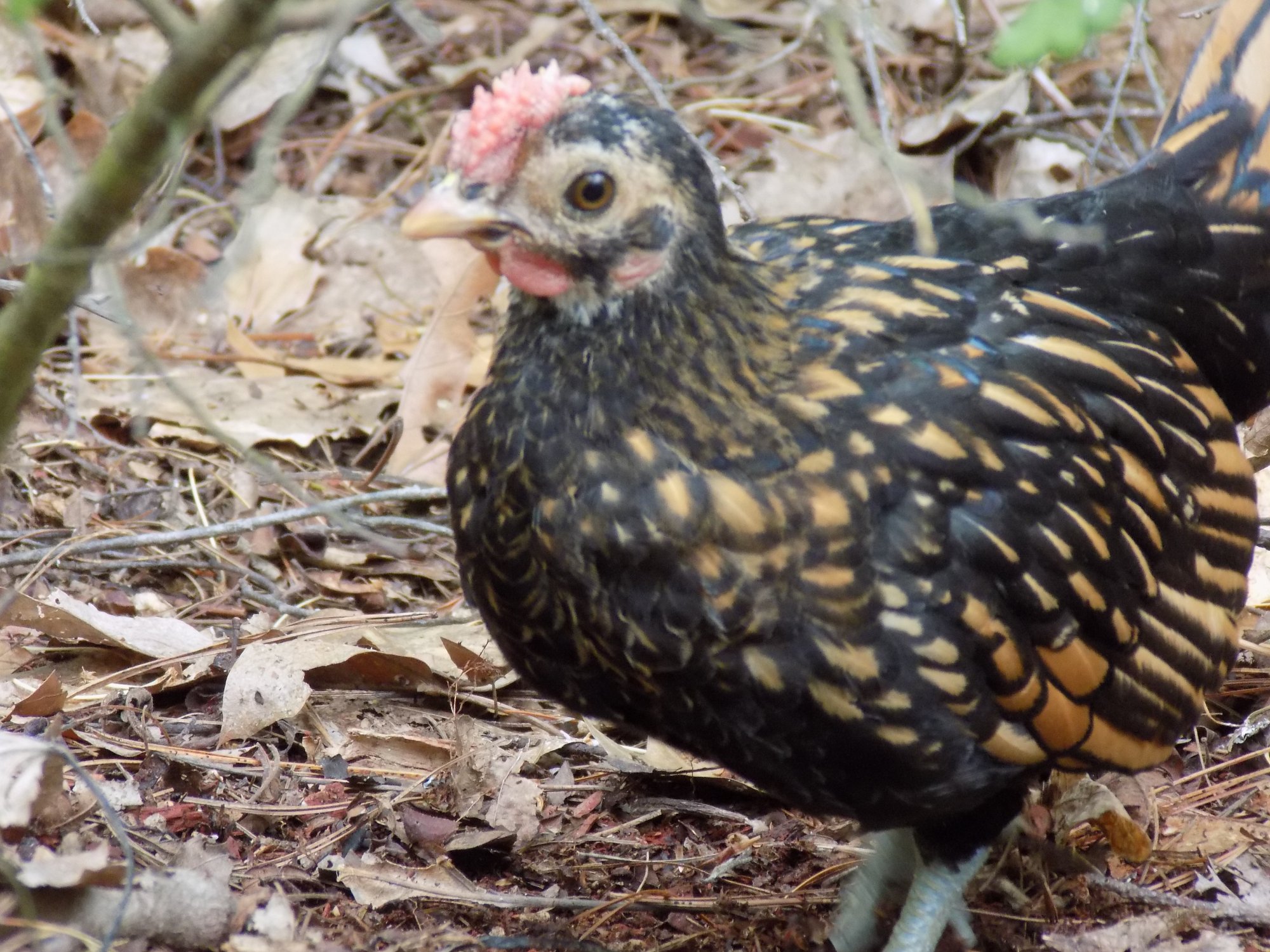 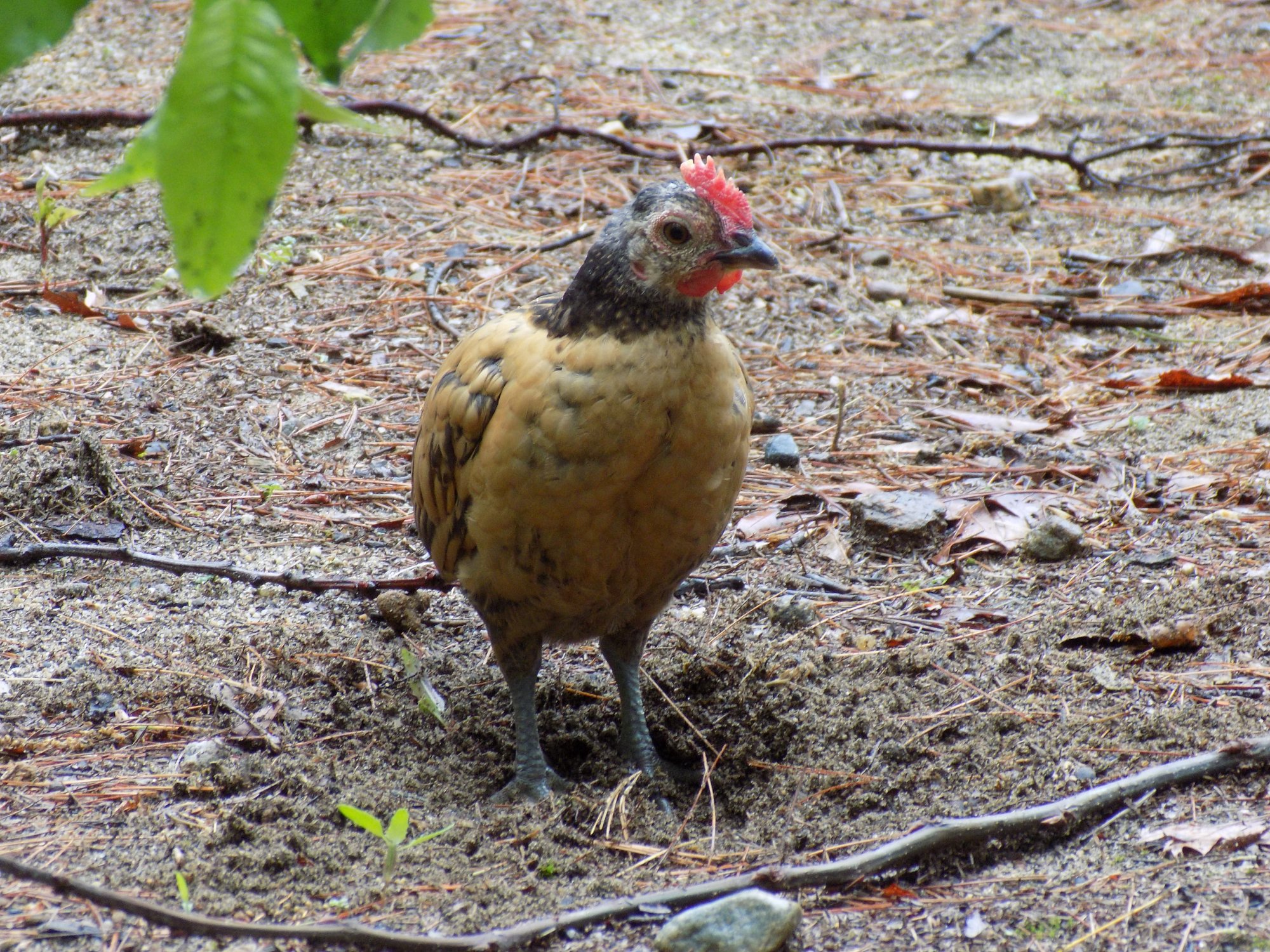 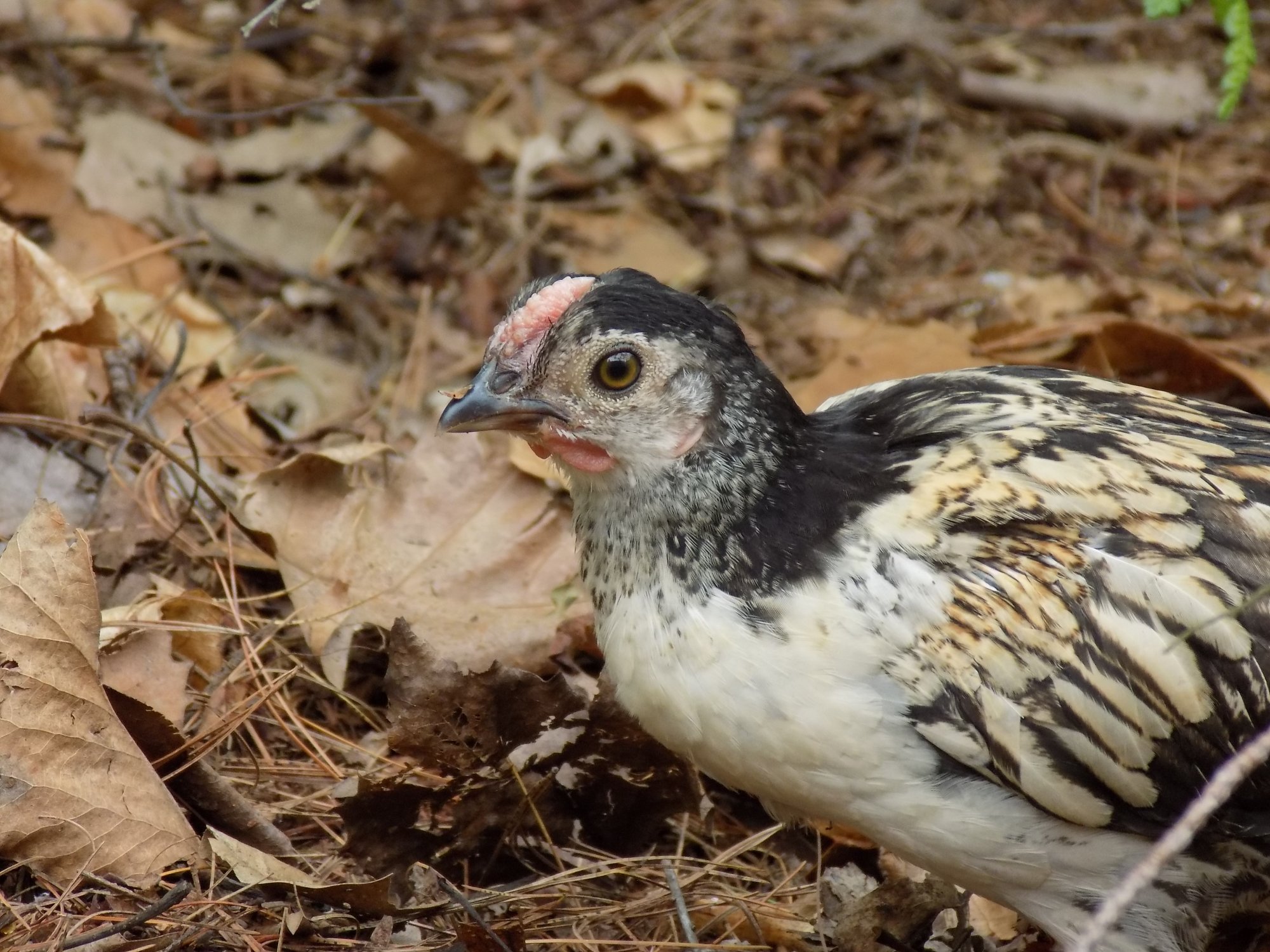 "Frosty" who managed to get a tiny bit of leaf stuck to their beak for their photo op.

In case it helps, these are the parents: 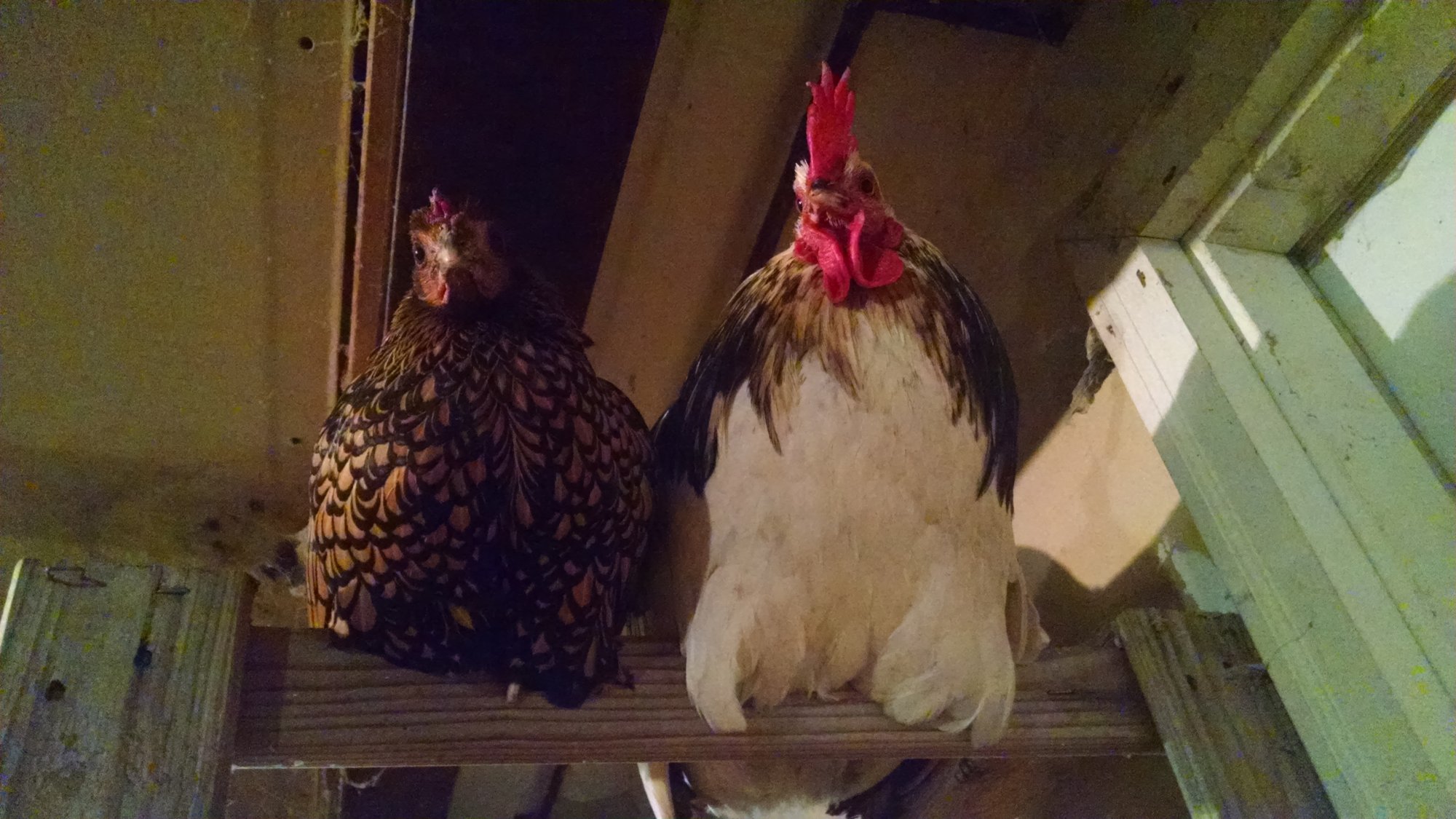 Wynn on the right there is Sam's son. 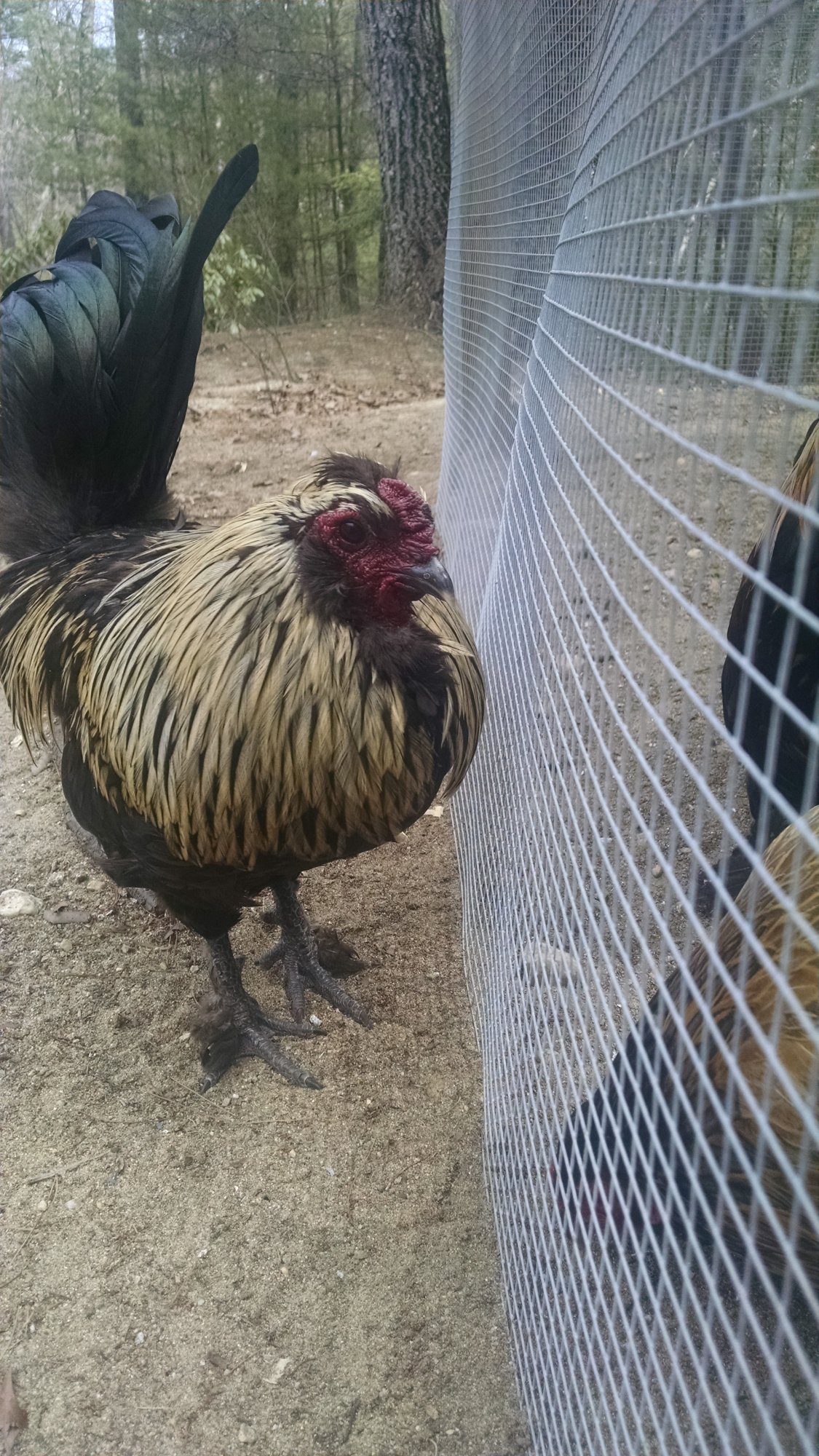 They are BEAUTIFUL! But I think they look all male!!! sorry but I'm just being honest!
The ONLY pullet looking one is this one..

If I were you I would love to keep them, but they don't live in harmony....

Can anyone explain why I have some rosecombs that are kinda smoother/smaller/paler looking (#2 and Frosty) as opposed to super pointy (#5 and #7)? I was assuming those two were pullets and the rest were cockerels.

And is there any possibility that there's been something weird that caused the hypothetical pullets to start to mature really quickly? I know I'm grasping at straws here but if my favorite hen hatched me 9 roosters... out of 9 eggs... geeze.

Wow! That's crazy! All very handsome cocks!!! I had a batch of 5 chicks and 4 of them were roos but I've never seen that many at once.

Well, I know the hen determines the gender of the chicks... So I would pay attention to what she hatches and not keep one that throws all boys, unless I was really hungry! I hatched 7/9 boys and 1 girl was taken by a predator. So I can kinda feel your pain.

My guess as to why some combs are smoother than others is because they are mixed breeds and the genetics won't translate 100% the same to every offspring.

It's kinda cool to have such a variety. If I had to choose who might be a pullet (which one squated for you) I would go with Spectacles or Frosty. I have also seen cockerels do the eggs song when they get startled though!

Your Sebright hen isn't pure. Are you sure she laid all the eggs? And, it was probably just bad %.

Yes, she was the only hen with access to her nest. She's from Tractor Supply; she's like twice the size of Sebrights I see at the local poultry show (but still the smallest hen in my flock!). I'm aware hatcheries keep Sebright roosters who are not hen-feathered and aren't homozygous for rosecomb for fertility purposes; Sam is likely a product of that.

She's my favorite hen, and I've hatched 2 females and 3 males from her eggs before, so I'm gonna give her a pass this once. Maybe she'll hatch me 9 pullets next time.

Edit: And as a matter of fact, Spectacles is my most definite male. Sickle feathers coming in and attempted mating behavior. It was either Frosty or #2 that squatted down. My memory is failing me. D:

Wow, your hen outdid my silkies' 7 males out of 7 eggs record!