The past few days she's been acting very peculiar. Initially, I thought it was because she was so cold, but now she's acting like she is dizzy. She takes a few steps forward, one to the side, and then she tries to sit. But she never really sits because all of her feathers on her bum are in the needle phase and look like they hurt. Some even look broken.

Since she's lost soo many feathers, I now see that her crop looks very large. Either that's how it usually looks, but I've never noticed because of her feathers or something is wrong. Under normal circumstances, I would inspect her crop and see how it feels, but I don't want to touch her because she's molting.

Any suggestions on how I can inspect her crop without causing her too much pain? Am i being overly sensitive to her molting?

I also plan to take a look first thing tomorrow AM to see if it has gone done overnight. Any other suggestions on what I might do would also be greatly appreciated.
Last edited: Dec 6, 2020

It might be helpful to post a picture if you have any. I don’t have anything to add here except I have handled birds during molting without ill effects so I would definitely go ahead and pick her up and give her a good check over.
E

@EmtheFishLady Thanks for chiming in. Here are a few photos. The best I could get.

When you've handled molting hens in the past, did you use a towel or blanket or something? 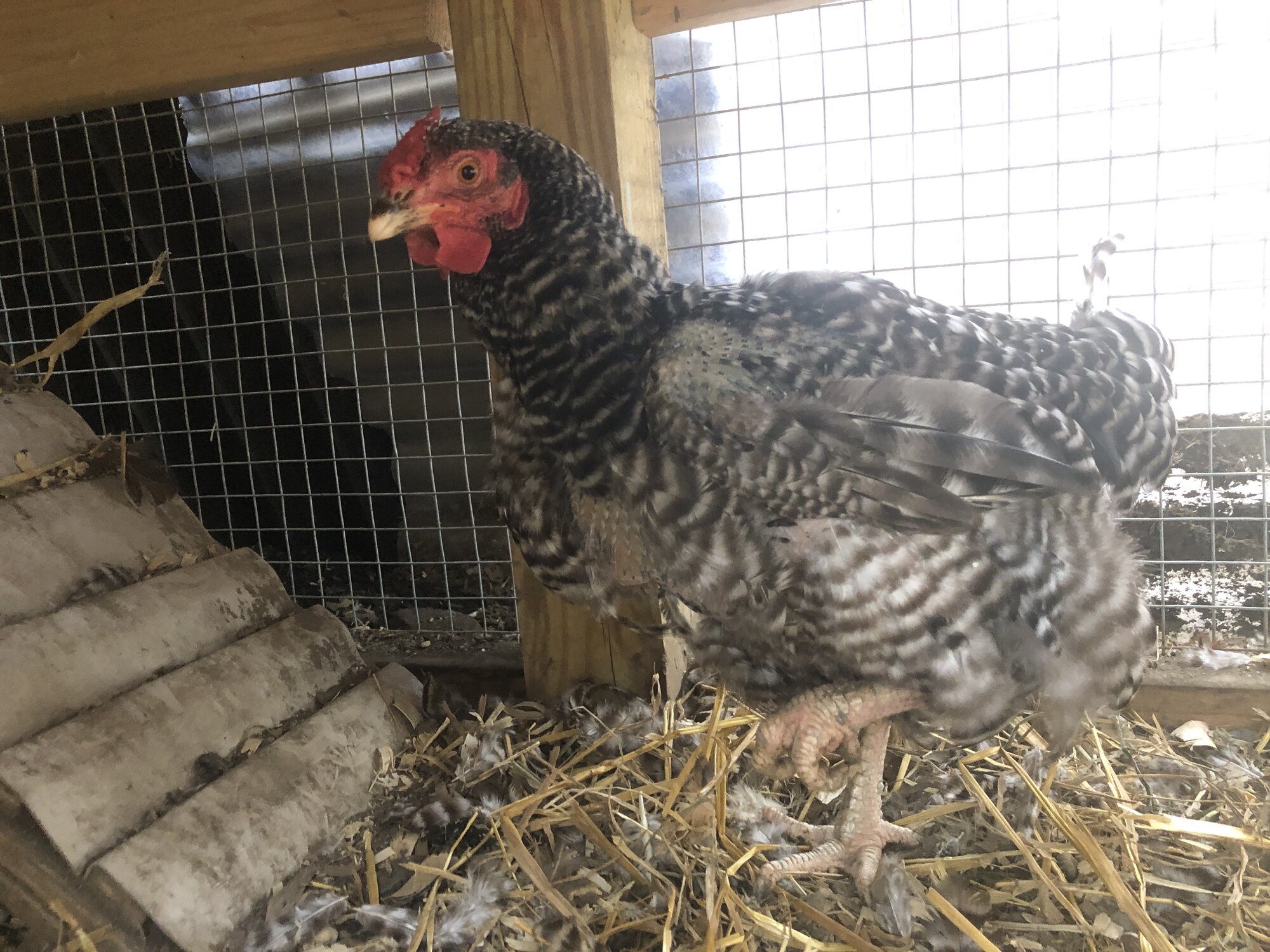 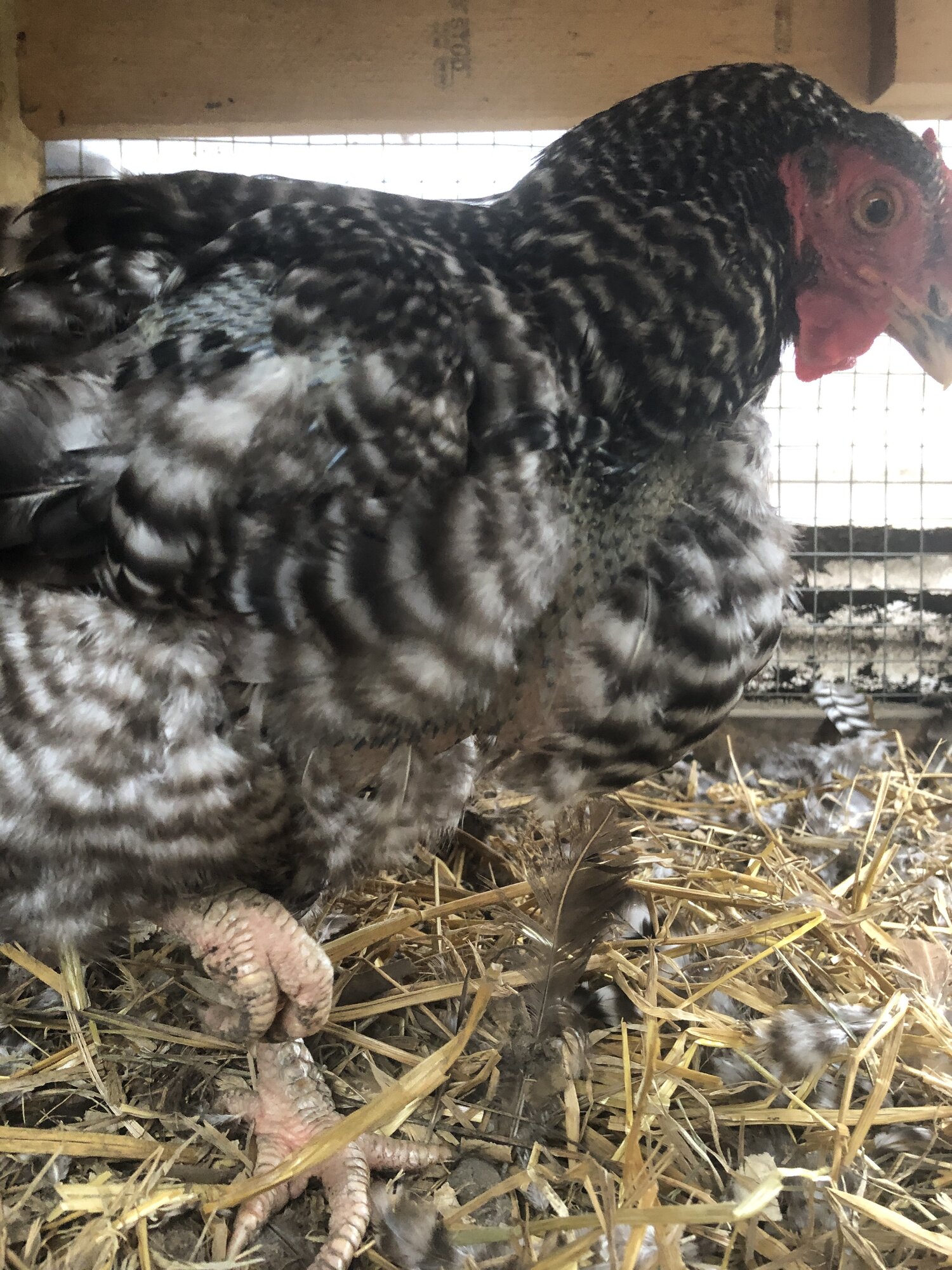 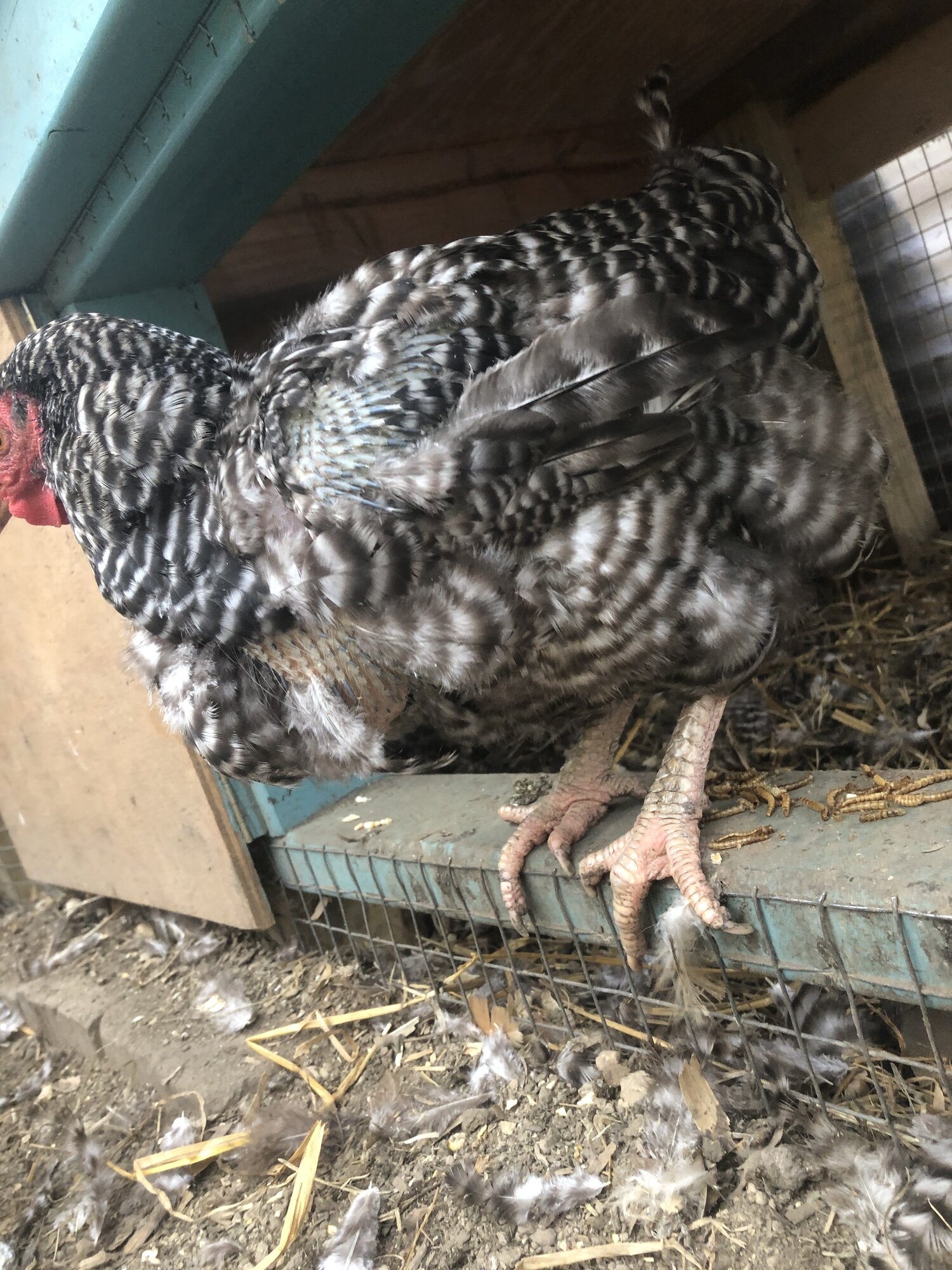 I will use a towel.

A hard molt can really throw them for a loop......they usually adjust within a few days.
Did you observe her crop reduced in size this morning?

Not sure I'd handle her much, but you might put her in a crate overnight for observation.

I isolate bird in a wire cage within the coop for a day or two....so I can closely monitor their intake of food and water, crop function(checking at night and in morning before providing more feed), and their poops. Feel their abdomen, from below vent to between legs, for squishy or hard swelling. Check for external parasites or any other abnormalities.

Then you can put tray underneath crate to better observe droppings without it being stepped in. If smaller mesh is carefully installed, tray can still be used inside crate.
E

@aart Thanks for your insight and suggestions!

I did check her crop this morning, and it was empty. So that was a relief.

But she is still walking and acting funny. I observed her for roughly 10 minutes this morning and she's walking really oddly. It's hard to explain, her head is up, but she's walking like she's sitting. She's not draggin her butt, but more like her whole body. Like she's trying to walk under something like she's playing Limbo or walking with her knees bent. Maybe she's just trying to keep her warmth in?

I tried to pick her up and it was clear she was not having that (when generally I can) so i cornered her and trying feeling her abdomen to see if there an egg was stuck. But I couldn't really tell. She was moving a ton. I did notice that her bum was in bad shape. It's bright red and the feathers are not coming in well. The feather pins or needles are bent. Poor girl.

Otherwise, she's eating. I warmed up some yogurt and crumble this morning and she gobbled it up, along with some mealworms and scratch.

I had not thought about parasites. Do you mean fleas or worms? I suppose I could really inspect one of the other hens who will let me hold them to determine this, since the whole flock would most likely have them, correct?

I have a dog crate, but it's huge. Not sure I can get it into the run, but I can try later this afternoon if my work schedule allows.

Thanks again for your suggestions! Really appreciate it!

Ohh, Doms molt terribly!
My two trip all over the place, you'd think they were dying.
Give her meat, sardines "ugh" lots of protein and good fats to give her energy and pamper her a little.

Chickassan said:
Give her meat, sardines "ugh" lots of protein and good fats to give her energy
Click to expand...

Just give her good eats with animal protein.
She should adjust to being a pin cushion in a few days or so.
E

Wow - you know my little Waffle so well. She's such a drama queen! Never realized that she might be playing this up too. Ha! I can't tell you how comforting it is to hear this. Thank you.

I've been giving her scrambled eggs every other day. (My Wellsomer JUST finished a 2.5-month molt.) Typically, she's the first out of the run and races to the cat food bowl to get the scraps. Maybe I'll treat her a little nibble here and there, till she's adjusted. Fingers crossed my Buff Orpington doesn't molt next!!

Thank you @aart and @Chickassan

Oh yes, my eldest dominique is top banana an absolute force to be reckoned with but molting just turns her into a train wreck.
She won't even hop off the roost on her own, probably a good thing since she'd likely tip over.
Good luck with Waffle, you'll sorely need it.

Wow - you know my little Waffle so well. She's such a drama queen! Never realized that she might be playing this up too. Ha! I can't tell you how comforting it is to hear this. Thank you.

I've been giving her scrambled eggs every other day. (My Wellsomer JUST finished a 2.5-month molt.) Typically, she's the first out of the run and races to the cat food bowl to get the scraps. Maybe I'll treat her a little nibble here and there, till she's adjusted. Fingers crossed my Buff Orpington doesn't molt next!!

Lots of white banded eggs and a slow crop
2

Chicken not molting? Or a slow molt?