Just got some chicks. Any advice is welcome.

So I got nine chicks today, all about 6-7 days old. I'm still relatively new to chickens as a whole, much less to babies. I am not, however, new to taking care of baby animals, and since I was a child I've cared for puppies and kittens. (Some of them on the brink of death, and I had to revive them.) I'm aware with it being so close to Easter, a lot of people are buying chicks for the novelty, but I promise that this isn't the case with me. I know I'm prepared to care for the chicks, especially with the time I need to devote to them. I read some stuff that already gave me plenty of information, but I'd love to hear any feedback or additional information that anyone may have. These chicks are my pets, and solely my responsibility, so I want to make sure I'm giving them the best.

Here's the setup I've got for them so far:

They're all in the same brooder that we will be upgrading in size as they get bigger. They've got a feeder and accessible water that we made sure they can't drown in. They've got about an inch of pine shavings to scratch around in, paper towels under that, and some additional padding under that. They've got a heat lamp set at enough distance to make the brooder 90 degrees Fahrenheit. The brooder is in my bedroom, where none of our other animals are allowed until these chicks grow up and can go outside. That way, they're under constant supervision (I'm always home and always in my bedroom). As far as we know, they're all female. The woman we bought them from has been raising them organically, and we went ahead and bought the feed from her that she'd been giving them so they didn't have to adjust to a new diet. If you have any suggestions on any additions I should make to the brooder, or anything I need to change, I'd love to hear it!

I've also got a few questions:

1. How often do I handle them, and how much handling is too much? I'm giving them as much space as I can, since they're so young and still new to the environment, but they are my pets, and I want to make sure they're used to humans and tolerant of handling once they get older.
2. How often do I check for pasty butt?
3. How often do I clean the brooder?
4. Also, information that I can't seem to find anywhere: How hardy are chicks this age? I know that across all species, infants have high mortality rates, and once they reach a certain age, they tend to be "out of the woods." Is there a certain age for chicks when I can expect their risk of death is much lower? The woman we bought them from was careful to make sure we got chicks that weren't too small, and she takes great pride in how well she raises them, so I'm not too concerned. But I've also been told that chicks tend to die really easily. I just want to be prepared if that's the case.

Thank you so much for taking the time to read this!

Whenever the brooder starts getting a mess (chicks can be messy especially when 3+ weeks) you would know and probably get a little disgusted over it. Some chicks get pasty butts and others don't. One of my batch of chicks about all of them got pasty butt and on the second batch I don't think any of them did and now they are already 16 weeks. Make sure they have enough grit in their chick starter to be digested. They will need this until they go outside. I would recommend warm water also. Its sounds as If it is properly set up to me.

Thank you! I'll check into the grit to make sure there's enough.
M

Just an update with a few quick questions! So the baby chicks are growing fast, eating and drinking properly, and seem to really get along with each other. I only have two problems.

1. The chicks, save for one, are terrified of me. One will let me pick her up, and one other is slowly learning to accept me. Beyond that, they tend to run when they see me. I know it's a work in progress and I need to be patient, but are there any tips on how to get chicks used to being handled? We have a vet who understands our chickens are pets and treats them as such. I want to make sure they're used to being handled as adults so that if they need to go to the vet (or be taken inside for severe weather) we can do it.
2. It looks like one of our chicks might be male, and I'm absolutely against rehoming. We don't know for sure yet, but I want to be certain we handle this properly just in case. The problem is, is that we already have a rooster, and my mother doesn't want the two of them to fight. What's the best way to handle this? Is it safer to just build two separate coops so that both roosters have their own girls to look after, or is it possible (and best) for two roosters raised separately to look after the same hens without fighting?

Beyond that, they're all healthy and active!

MountainDont said:
1. The chicks, save for one, are terrified of me. One will let me pick her up, and one other is slowly learning to accept me. Beyond that, they tend to run when they see me. I know it's a work in progress and I need to be patient, but are there any tips on how to get chicks used to being handled? We have a vet who understands our chickens are pets and treats them as such. I want to make sure they're used to being handled as adults so that if they need to go to the vet (or be taken inside for severe weather) we can do it.
Click to expand...

My chicks hated me for a while. I think they automatically won't like anything reaching down to pick them up.
Once they were old enough I started bribing them with dried mealworms. Once they got to the point they could fly up on the edge of the brooder and come visit me on their own terms, they all became lap chickens.
I still occasionally pick them up for a few seconds and put them down. They're getting more used to being picked up that way too, without it always leading to being separated from everyone (a bad thing in their book). That way they don't associate being picked up with something bad.

And of course buying their love with mealworms has helped. Hehe

I cant answer the rooster question, but handle the chicks. Its perfectly normal for them to run when you appear above them, dont let that worry you. Pick them up and hold them close to you so they feel safe. I feed them some treats from my hand to make it a nice experience. I get mine out 2 to 3 times a day. Mine are 3 weeks old and at that age you can see their personalities coming through. I have 2 that were handled a lot in the first few days and they are very friendly. The others I got at a week old and werent handled as much, so are less friendly, but individual personalities do make a difference.
M

Thank you guys so much! I imagine since I'm much taller than they are, they'd see me as a predator at first. It's only instinct. I'll definitely give the mealworms a try once I'm sure they're old enough. And they're less than two weeks old right now, but I'm already starting to notice some personalities. The one that lets me pick her up, I've named Henmione Ranger because of her personality.

As for the potential of another rooster, I think we'll just build another coop and keep them separate, just to be safe, unless it's best if they're all kept together.

Kiowa, the little town nobody has heard of

And yes, I’ve read that chicks hate hands reaching in and grabbing them.
M

Sorry for the slow updates. They’re still doing quite well. Eating a lot and getting used to me handling them. I tried the mealworms and now they peck at my fingers. I’ve got pictures but they’re not very good. I’ve got 9 of these sweethearts and they move so much so unfortunately I couldn’t get good pictures of all of them. In a couple of weeks, we’re going to be buying a coop to assemble so that they can start having some outdoors time. 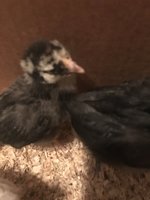 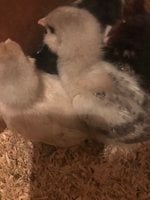 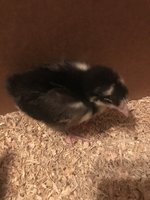 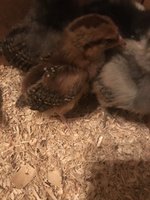 Raising chicks in an outdoor brooder
2

S
How much space do my chicks need?