I'm sad to say that I think time is almost up for my poor Lacey. She's the double laced barnevelder in my avatar.
I've got a soft spot for her because she figured out as a young pullet that she could hop up on my shoulder for extra treats.

Anyway, she's just over a year old. She started laying in the spring, but right away I had a bad feeling. Virtually every egg had blood spots in them. The albumen in some of them was basically just red.
At the end of June I integrated 3 six week old pullets in with my small flock (got them as day olds). It was fairly uneventful, but it seemed to stress poor Lacey out and she stopped laying. She then developed some diarrhea. I cleaned her up, gave some probiotics and her stools hardened somewhat.
The diarrhea came back at the beginning of August and I gave her Baytril for 5 days, followed by a week of probiotics. The diarrhea went away again. Mid August I wormed everyone with eqvalan gold, 10 days apart, just in case.
Throughout all of this she never acted sick, although she has lost some weight. The key thing I noticed though is that her comb is still bright red and plump, but she hasn't laid since June. Thus I suspect internal laying.

Yesterday I noticed that she wasn't pushing the younger girls out of the way to eat, and when I threw some scratch down she was going through the motions but I don't think she actually consumed much.
This morning she was slow coming out, and her crop was full and squishy. I massaged it and some gas seemed to come out. I gave her some clotrimazole which I had on hand and then had to leave for work. She was up on the roost in the run, puffed up, and looking tired.

I just wanted to document all of this in case it can help someone else. I'll do a home necropsy if and when she does pass.

I should add that I haven't found any lash material or soft shelled eggs.
Everyone else is laying and acting normal.

We opted to euthanize poor Lacey last night. Her crop wasn’t emptying well over the last week and she was losing interest in food, even treats.

I didn’t get many pictures, mostly because of the surprising amount of fat. There was so much that I had trouble finding all of her organs.
Definitely not what I was expecting. She’s had several bouts of diarrhea over the summer, and she had lost some weight over the last few weeks, her breast bone had become fairly prominent.
Her liver seemed healthy. Her reproductive tract was difficult to get to, but didn’t seem normal. Especially for a hen with a bright red comb. I suspect there was some internal laying at some point.

I don’t really feed treats, especially in the summer. I just soak some of their regular food to lure them back into the run when I leave for work. In the winter they get a handful of sprouts every few days.
I had to pick up more food anyway so I switched from the local mill’s all flock feed to a layer feed that is lower in carbohydrates. Both are crumb so they can’t pick through it.

Everyone else seems healthy and is laying consistently. Hopefully she was just predisposed.

I'm sorry to hear about Lacey

Thank you for taking the time to post your photos and give a description of her history.
I agree, that is a lot of fat. I do also agree/believe that some hens (genetics) are more prone to be fatty. Diet does play a part, but it sounds like you really don't give any "fatty treats" at all.

Good, but tough, call.
Condolences.
...and Kudos for the call, necropsy and pics.

Man, that is a LOT of fat.
If she had been an internal layer you'd have found them inside.
Is this just fat?: 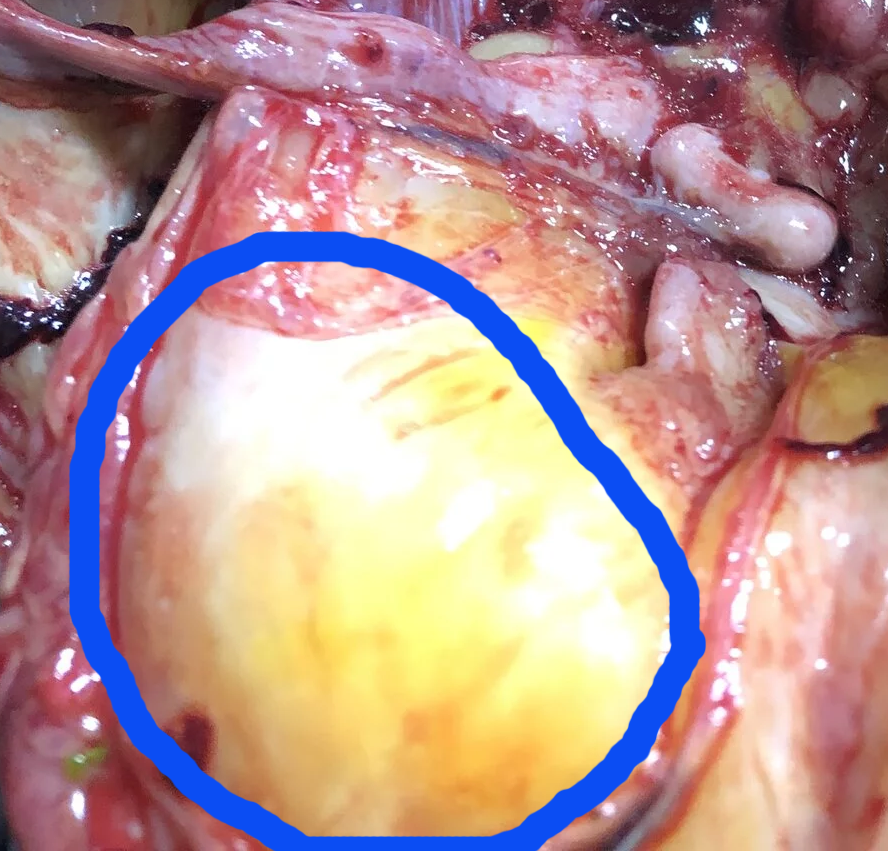 Did you open her gizzard?

J
2 week old chick having trouble with her neck

Chicken will not put weight on one of her legs