Maybe you could check out the chicken breeders & hatcheries forum.

I have all sorts of poultry books, most say they can get 3ft tall, are noisy and aggressive, yet okay with handling and sometimes fight other chicks strait after hatching in the less domestic varieties. BUT go to a breeder who breeds for pet quality, for a good temperament and you could get some very nice birds. Here's a link to the BYC breed page on them: LINK

) well actually it's late so I'm feeling more like this:

check out the oriental thread, you will get knowledgeable experienced responses there.

Quote:
X2 , or go to a hatchery and get mixed breeds sold as pure with untypical type and temperaments

I have three Malay cockerels, and you couldn't ask for a better pet that doubles as a security device - people think twice before they enter your barn when these guys run out at them. They mature very slowly and are not going to do well caged in small areas. They aren't as aggressive as most other Oriental games but can still be much more so than the average production chicken. My three are kept in line by an old fart Phoenix rooster half their size but with 5 inch spurs. He doesn't tolerate foolishness and they listen to him.

The cockerels themselves are extremely people friendly, like dogs. They learn tricks very quickly, like jumping up to get catfood out of your hand held high. Being a large size, though, they can easily knock down a small child if they are eager for food, etc, so you'd want to consider carefully whether to let little kids around them.

Malay can have nutritional issues as they are growing, from what I've read, and confined they will often featherpick, which is why I was given these cockerels to begin with, something had eaten their tailfeathers. But they are growing back now.

If I could find a good quality hen, I would consider raising some chicks. But they seem very hard to come by, and my bird money is spent on the longtails, for the most part. 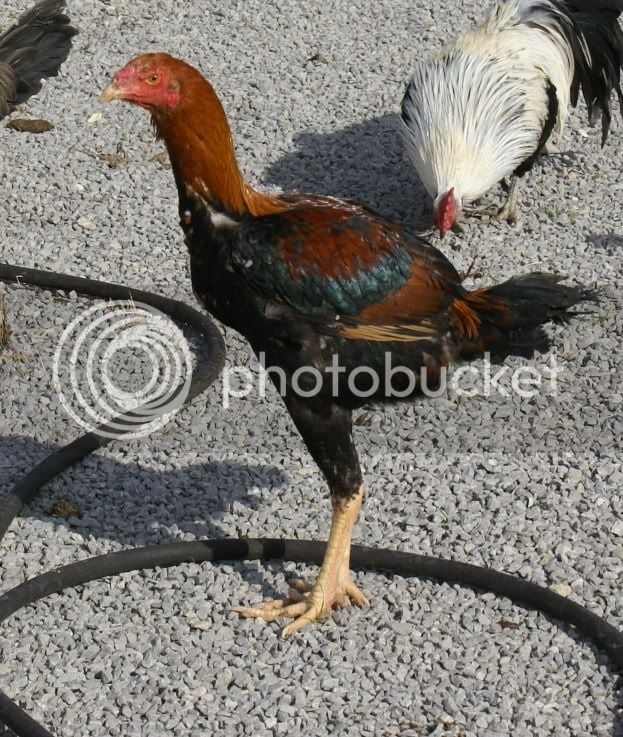 Behind these two young cockerels are standard large fowl Phoenix hens, to give you an idea of size difference. 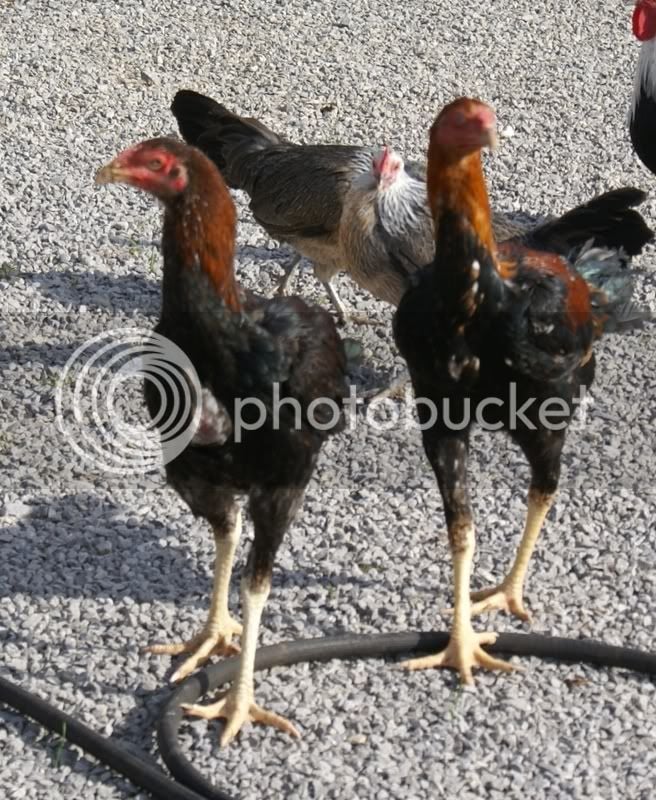 Quote:
The quote above is way off base.

Malays: are the least aggressive of all the Oriental Games, most would not even come close to being classes as 'game' by anyones standards. They also are not noisy.
Gentle giants would be a much better description.

Malays do not fight as chicks; that is Asil.

There are no Malay breeders that breed for pet quality. First, because you don't have too. Secondly, all Malay breeders are also or have been exhibitors.

Malays are Orientals bred for exhibition.

They cost alot and are very difficult to raise.
Malay Bantams are easier to raise, but there are even few of us that raise them than raise the standards.
Last edited: Jan 3, 2012

Malays are not for beginners. I wouldn't even suggest them for the advanced poultry keeper unless that person was in it for the long haul and didn't mind dealing with failure.

Malays have a number of health issues inherent in the breed as found in the US today.
Legs
Heart
Shakes

They need a large area in which to run and excersize.
They are going to cost a minimum of $100 per bird (young stock); if they are any good at all.

By the way, hatchery Malays are JUNK. It is questionable as to whether they even have any Malay blood in them.

If you really want a tall bird, I'd suggest a Shamo. They do not have the health issues that Malays have.

Thanks Saladin. I'm sorry but my jaw fell open reading the description of Malays as aggressive, and one needing a pet-quality Malay. I'm sorry but they're just not a bird for beginners, yet, they're a seriously friendly, loyal, intelligent breed.

AY WHAT EGG DOES