There are many threads about coop pop doors and I've read them all and looked at pics. But they do not address my issue. The chickens have a secure run of 20x30 ft. And around that a 1/3 acre enclosure that they get let out in in the morning. I made an opening for them to get out of the run at the far side of the run as you enter it, and obviously it is not covered or inside a structure. The run has a hwc roof.

So if I wanted to make a guillotine style pop door that I could open from the people door (30 ft away) so that I don't have to go in the run to open the little door, what material would you use to make it from so that it wouldn't bind and be hard to open, or deteriorate so quickly that I would have to make a new one every few years.

Ideas that I have so far is:

for the door: metal (if I can find something in a suitable size because I'm not set up to cut metal) or 1/4" plexiglass

for the track: ??
Here's where I am stuck. I think if I use wood that'd cause the door to jam when it gets wet. I like the idea of drawer tracks but I think they would rust and bind.

security:
I can let the door go down below the 4x4 at the inside bottom of the run enclosure. So I don't think any raccoon could get their fingers underneath that. But I would also like to hear any other security measures that I could take that would not require me to get into the run to open or fasten them. I'd been thinking to have two ropes one at the top and one at the bottom, so that I can secure the door no matter which position it is in. But I am not sure that'd work.
K

Here is my pop door. It's hard to picture why you have to be 30ft. away. I just can't picture it. Can you post a photo of your set up?


Here is my pop door. It's just a simple pulley door. 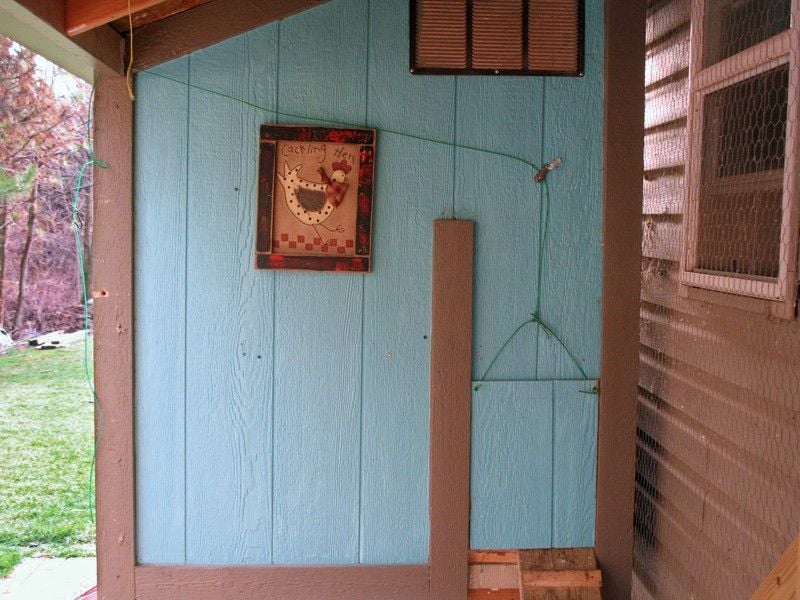 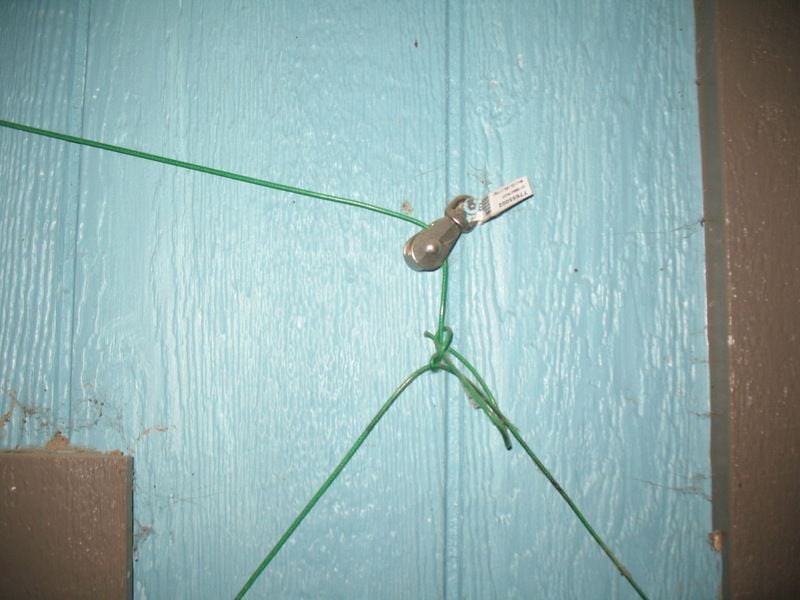 The brown pieces of wood that the door sides up and down in, have a track cut out of the wood so it can easily slide up and down. The green cord just goes up to a hole by the main door of the run: 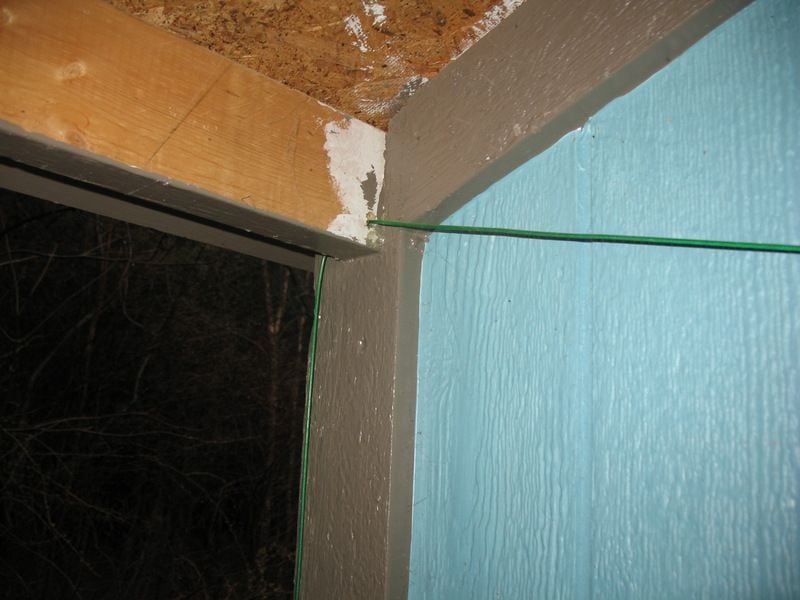 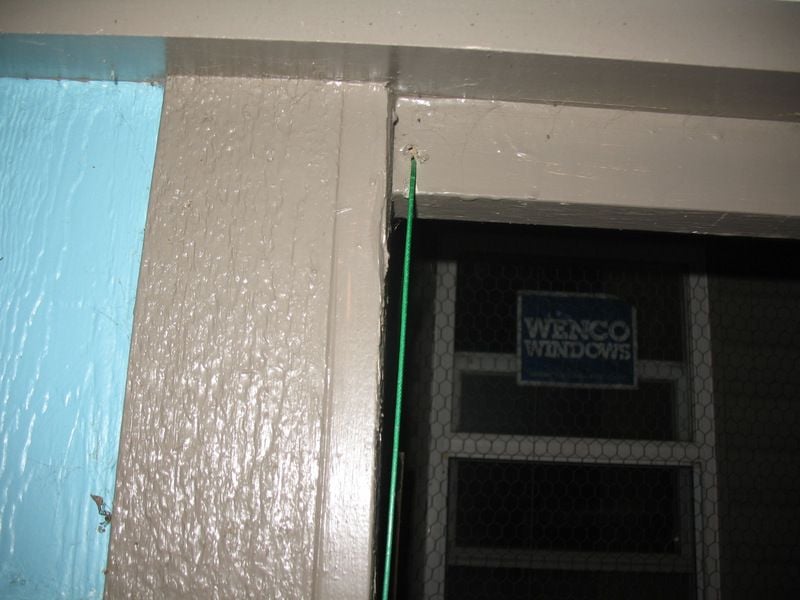 Then it attaches to a simple eyelet hook. 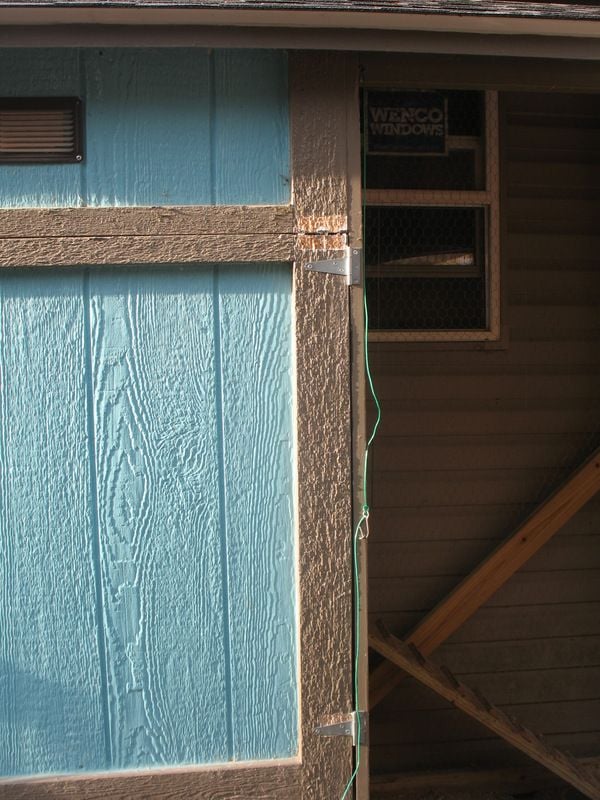 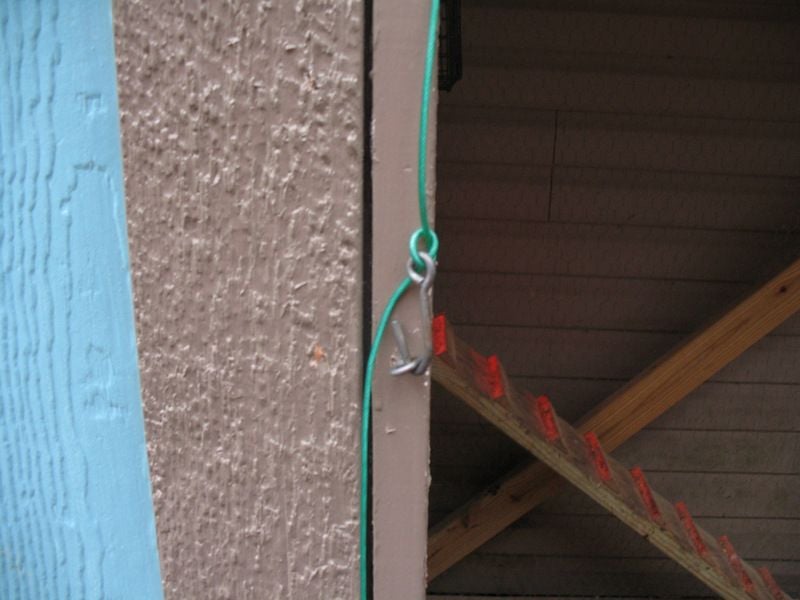 So the popdoor I want to make is in the foreground hwc wall. I enter the run at the coop in the far back. I do not want to go into the run to open and close the door. I cannot get to this side of the run without stepping over 42" electronet (I'm 5'1"). The popdoor will be exposed to the elements and it will be between the two studs at the right hand side that are closer together. So I'm a little worried to use all wood for this setup because it would be exposed, it would expand and contract causing the door to bind.

I have a door there now on hinges that pivots upwards (this is an old pic) that I open/close by hand secured by a bungee cord. I have one very spooky chicken, so now when I enter the run in the evening to close the door, she will be in the run but dart away from me, scoot outside and I have to move heaven and earth to get her back in the run so that I can close up. So if I could close the run without actually coming inside she'd not spook and I could close it up without chasing her around.

I would use wood. Paint would keep it going for years.

You could use aluminum channel. Likely you could get this from the hardware store. All you would need to do would be to plan how to attach it and cut it to length. This sort of thing could easily be cut with a hacksaw. If you were patient, you could cut it with just a hacksaw blade, avoiding the cost of a hacksaw frame.

In my opinion, the inability of a predator to gain purchase on the door from the bottom or sides would prevent it lifting the door to enter the run. My pop doors seat completely at the bottom and ride in the tracks on the sides, covered at the top. There is no way to hold the door from the outside.

Therefore, it seems impossible to open it from the outside. The door is 1/4 plywood, not particularly heavy. You could use one of many sheet materials to make a door. I would stay away from anything so heavy that it would injure a chicken if it were to fall on one.

Given the distance you mention from where the door will be to the point where you are going to raise and lower the door, you may need a heavier door to ensure that it will pull the draw cord through the pulleys to fall into the closed position.

I ran a cord through pulleys to raise and lower the door. It ties off in the open position to allow the chickens easy access in the daylight.

When I close the door, I listen for it to sound against the bottom so I am sure it is closed. If it doesn't sound right, I check to see if litter has blocked the track. I have it set up so that debris should not collect at the bottom.

Many thanks for the replies. I went to Home Depot and got a 18x24" 1/4" plexiglass, 2 pieces of vinyl trim, one 2" and one 4" that I will use to make the track, one screwed on top of the other. I also got pulleys and hooks to guide the rope and a cleat to tie it up.

I got an extra rope to route from the bottom to the cleat so that when it is in a closed position I can tighten this rope and it cannot be lifted. I still need to figure out what the mechanics of that is going to be, lol. Trial and error, I suppose.

So the idea is that with the plexiglass and the vinyl trim I would not have so much warping, swelling etc. issues and the plexiglass is easy to replace anyway. Will post pictures when it's complete.

Yes, it's 20x30 ft fully enclosed in 1/2" hard ware cloth. This was expensive but it gives me peace of mind at night. The original idea was to confine them in this run, but they had basically demolished any living thing in there within a year, so I felt sorry for them. Then one night we had a bear roaming around and I decided to get electronet, So I got 3 164' nets and now have created an outer zone around coop and run of about 1/3 acre. They can now free roam that during the day. Hence the need for a second popdoor and the pulley system. Which is now finished. Here are some pictures:

In open position. I put some old paint on the plexiglass so that they can see something is there and they won't crash into it. I also put a screw in the cross bar to act as a stop so that I can't accidently pull the entire door from the track by pulling too much on the rope.
' I created a track from two pieces of vinyl trim, in which the plexiglass rides up and down. one pulley directly above the door assembly: Hooks to guide the rope along the rafters: Another pulley at the other side where the cleat is. The cleat to keep the pop door open: My gold laced wyandotte availing herself of the entry into the run. Some of the other girls still outside within the electronet Finally everyone was inside and I closed the pop door. When you click on this picture, it will enlarge and you can see that the bottom of the plexiglass sits well below the threshold. I don't think anyone critter could open this from the outside: Nice Solution! Might think about using some grazing frames in your run...tho in the pic run looks shady-maybe time of day or overcast.

Hope that electronet will stand up to a bear, might think about hot wire (really hot!) outside the run.
Is the coop inside the run or adjacent to it? How many birds do you have? What do you do about leaves and /or snow gathering on the run roof?

. All my research says that 8000 volts is enough to shock a bear. An you know what? If a determined bear decides he wants to get in, there is nothing, absolutely nothing that can deter him. So I try to discourage first attempts hoping that the experience will lead him away from our place.

The coop is one part of the secure run wall. sitting largely inside, because I wanted to have access to the coop itself with out having to go into the run. It sits within the electronet, though.
I don't do anything about leaves or snow on the run roof. Despite the fact that the run is under trees and there are a ton of leaves on it in the fall, we always get a couple of good storms with high winds to blow everything off. We haven't had really big snowfalls (the most about 10") so I don't know how the roof will hold up to two feet of snow but I haven't cleaned any of it off. It is constructed of 2x12s that are doubled in the highest point of the roof, though. I had help from a house framer, so it's super solid. The snow just melts turning the secure run into a mud pit but it drains fairly quickly.

Grazing frames will be difficult because it is in a totally wooded area. Not much sun. The pics were taken at about 6 pm with the sun still shining. The green area behind the run that you see in the first pic is grass that is just now starting to grow (we're at 1700 ft elevation always about 6 weeks behind the seasons in the valley). Once that grass is tall and strong I will reset the net to include that in their outdoor run. There is plenty of forest floor vegetation under the leaves and some grass. So they are getting greens. I'm also feeding them greens once every two days or so.

I have 16 full size chickens. I am getting 12 chicks in May, half of which may be roosters, I'm looking to add 6 more layers to my flock and will cull accordingly.


Ï'm really happy with my setup. The only thing that I wish we had done different is think about how runoff water from the house goes down the mountain. It happens to go right through the middle of the run.

So every big rainstorm the chickens have their own river. And muddy feet. Maybe I'll try this summer to think how I can divert it to miss the run area. I am from the Netherlands after all. We have a history of building dams and levies and diverting water away from where we don't want it.
Last edited: Apr 28, 2013

Is there anything I’m missing? (Shed to poultry barn conversion)