So, I know mixing breeds is kinda frowned upon with certain birds (especially show qulity birds) but I keep seeing pictures of different kinds of mix breeds that just look FABULOUS! I keep chickens as pets (eggs are a bonus) and may show one of my silkies in the future, but I can help but wonder what you might get when crossing certain breeds.

It got me wondering which chickens CAN'T cross breed? Like what could a silkie never successfully mate with? Or a polish?

And what about color combonations and feather types? I know you shouldn't breed a frizzle to another frizzle but was never explained why.

Chickens make such great pets and I just love having them around! They are so lovely to look at with all their crazy different color and feather types/combonations

Could you imagine offspring from some of those combonations?

I know it's harder to find homes for mutt chickens but I have lot of friends that keep chickens just as pets and for eggs and would be more than happy to just give away my mutts. I can't help but keep thinking about this though. If you look at a similar situation in dogs people love having purebreeds but they have so many health problems and generally take longer to learn then mutts because of inbreeding. I think chickens might be the same way? Ive always found mutt dogs to be better pets then purebreeds.

This all started when I bought phoenix mix pair last weekend. The roo is SO FAT but hes such a butterball and LOVES to be babied! He was instantly one of the most beautiful roosters I had ever seen even though hes mixed. He just had such beautiful coloration and that big round body was so darn cute! Im still trying to figure out what hes mixed with. It just got the ol hamster wheel spinnin, LOL.


Anyway, Id LOVE to hear more experienced chicken owners/breeders input on this. AND PICTURES!!! PICTURES OF YOUR MUTTS!!!!

There aren't any breeds that absolutely CAN'T mix, it's just some cause more problems than other. The main factor in this is size, in which two problems can arise.
1. Natural mating. Can you imagine a little Serama rooster trying to take on an Orp hen?

He just wouldn't be able to fertilize her without some help from us. Also the other way around. Small hens can be fertilized by bigger roosters, but of course she can get beat up a little more than one her size would cause. Some people do use artificial insemination with chickens though, especially the big exhibition breeds with all that "butt fluff" - like cochins. The extra down around the vent can really cut down your fertility rate since it can get in the way of their "connection". AI with birds isn't quite as difficult as with other animals like cows and horses...but I don't think anyone would WANT to perform AI unless they had to

2. Egg size vs. chick size. Say you put a large rooster with a small hen in hopes of breeding larger size into your flock. The chick may inherit those lovely big and tall genes from daddy, and therefore grow a bit bigger while inside the egg. Regardless of what's inside the egg, the egg itself won't get any bigger. So sometimes there is such a big difference that the babies get too crowded in the little shell, and can cause some major problems.

Most mixed breeds I've seen/had/heard of, had no problem in mixing up. Most of the time the successful fertilization happens with two birds without a dramatic difference in size. So you probably won't have any issues getting some interesting hybrids, with the breeds you currently have

I could definitely picture some pretty birds!

One thing is for sure - if you love pretty colors, mixing breeds is one way to get them! My mixed flock has thrown some surprises over the years, which is much more fun than purebred color pens where you ALWAYS know what the outcome will be. Sounds like you'll have quite a few 5-toed babies running around with little top knots or frizzled/silkied feathers!

Maybe even some naked necks with those showgirls.

As far as I know, frizzle and tufts are the only two genes you really need to worry about 'doubling up' or purebreeding. Frizzle in pure form (the bird has two copies of the gene), can cause the poor little guy or girl to have very brittle feathers, often ending up in porcupine-like birds....especially if there is fighting, where the the feather part could get ripped/broke off, leaving you with just prickly feather shafts/quills. Can make for some very ugly (and probably cold in the winter) birds. There IS a good thing about pure frizzles though - every one of their offspring will also be frizzled. So if you have a pure frizzle rooster and normal girls, you'll hatch out all 'regular' frizzles!

The gene that causes those tufts on the cheeks of Araucanas...can be lethal in pure form. So a lot of people do like to keep, say, a clean-faced rooster, with tufted hens. I'm pretty sure you CAN breed tufts to tufts without chicks dying, but there's the risk of it happening. I don't raise Araucanas so we'd have to get some experts to tell you whether I'm correct or mistaken

Wow that is some GREAT input!

Luckily my little frizzle showgirl is a cockerel and ll my girls are smooth.
My Araucauna is a pullet and the only one I have atm. Id love to get her a male sometime, so now I know which kind to get her.

Could you imagine a tiny serama with a topknot?

Haha, that would be so cute!

Brilliant, I've been thinking much the same about my chooks now it looks like my little Lavender Araucana is a boy. I've got a white Orpington or some Rhode Island hybrid types to cross him with- I think I'm going to have to give it a go just to see what happens! And hopefully I'll get chickens that lay lots of lovely blue eggs.
I've got a Light Sussex x Lavender Araucana that we hatched out for my friend, it's going to be an amazing looking creature I think- I've just bought some Rhode Island x Orpington eggs off ebay, so assuming I get some to hatch can't wait to see what they look like too!

I think cross breeding will be very interesting, and remember alot of breeds originated from crossbreeding all those years ago so who knows what you might create!

I find mutts so interesting..I love the surprise.

I hatched out 3 of my black sumatra eggs, they were fertilized by my barred rock roo. These chicks are still young but I think they are going to be very interesting looking when they mature. 2 are barred and appear to be roos. They are starting already to get the long tail like the sumatra roos. A barred sumatra...neat looking birds!

dalmation dogs were originated from cross breeding and st bernards were saved from extinction through cross breeding (no st bernard today is true standard of the old breed but are actually better!)

I think it's gonna be so neat to see what my flock produces!

He sure is pretty! What a face!

I let my culls free range until I can decide what to do with them. Bantams & standards. I've had some very interesting chicks happen that way. One thing about hybrid poultry is vigor is usually better. Almost all of my layers are hybrids, and they give me the best & largest eggs I have found anywhere.

These are all examples of hybrids from my yard birds:
A cockerel that is Australorp X RIR/JBG 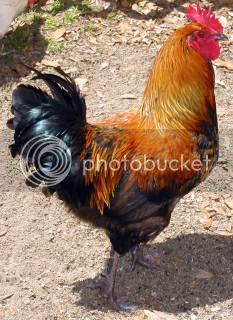 Another that is Australorp X RIR/JBG/Australorp 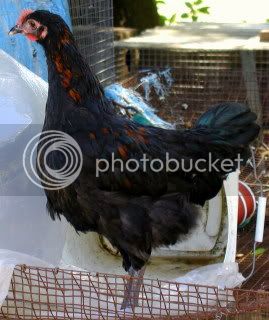 This one is a white silkie X quail d'Anver 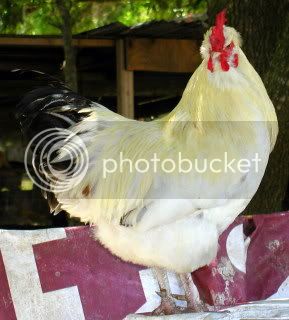 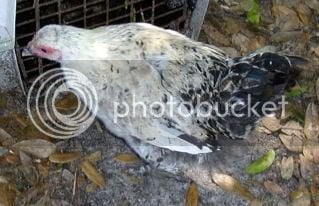 This is a little roo, he's an Araucana cross with ??? mystery hen? 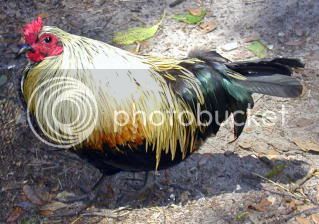 And the funkiest roo of all, this guy. He's from a Red Pyle Modern bantam cock out of a Dutch Citron Silkie hen 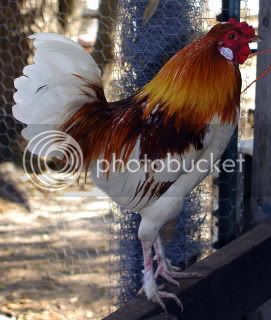 Nothing too exotic but as you can see, a wide array of possibilities. For yourself, if it's what you enjoy, go for it. Just know that most roos will end up as meat birds and the outlet for them is very limited. The advice for Frizzled X Frizzled & Tufted X Tufted was spot on, keep that in mind.

Quote:
I love your"Funky" roo. I'm working on mixing Silkie with EE's. All of them are just chicks right now but the silkie look is definately showing up in them. Also they all have black skin and feathers on their legs and feet. But not all of them have 5 toes. Some have 4 and some have 4 on one foot and 5 on the other, but none of then appear to be turning out more silkie. The hen is golden laced EE and the rooster is splash silkie. The color that is mostly showing up is a light splash, almost white. They're only 3 weeks at the oldest so it's hard to tell how they're going to turn out but it will be interesting.

has anyone ever tried this...