I currently have my mallard breeds and muscovy living together. I want to build another coop just for my muscovy for several reasons.

I know the muscovy like to roost and planning on putting roosting bars. How high or low should they be? I clipped my muscovy wings, so they will have some limitation. How wide should I make them for their feet?

I know for mallard ducks it is not as worthwhile to put in nesting boxes, since they lay their eggs wherever. Is it worth having nesting boxes for muscovies? Or are they hit and miss like the mallard breed?

you could just make one big coop and put roosts in it, and use a separate coop for seperating drakes instead if needed

Any muscovy owners have thoughts on roosting bars and nesting boxes.
I

We built an enclosure for our muscovies inside their run and they retaliated and left for the pond. Although we raised them they were wild wanting to roost. My husband was disappointed having gone all out to build a secure enclosure.

My Muscovy roost on 2x4 laid flat side about 4’ off the floor they have clipped wing and can still make it to the poop tray under the roost so may 3’ with out poop try.

intrigue899 said:
We built an enclosure for our muscovies inside their run and they retaliated and left for the pond. Although we raised them they were wild wanting to roost. My husband was disappointed having gone all out to build a secure enclosure.
Click to expand...

Yeah. I know people can have a hard time with muscovy. We clipped their wings so they wouldn't just fly away. We recently let them into another part of our property, and one jumped the fence back to the coop. I was really worried they might leave us, like they do with some. So far ours seem to be happy with us.

Ours live in a coop at night currently. They like to hog it and will sometimes not let our other ducks in at night. So we think they should have their own place.

My Muscovy girls spend their nights with my Rouen in a horse stall. They prefer to roost on the walls of the stall, which are about two inches wide and about 4 feet tall. They do not have their wings clipped.

I do not have nesting boxes, but I do have large a wire dog crate on one side of the stall that is covered by a blanket and filled with extra bedding. The crate is not pushed into the corner, there is an area that is maybe 16 inches by 16 inches left, which is also covered and has extra bedding. When it’s chilly or they don’t feel like roosting (or when they are molting and are stuck on the ground), my white Muscovy cuddles with my Rouen in the corner and my pied Muscovy sleeps in the dog crate close to the other two.

During laying season, they make nests wherever they want to, and move their nests every time they get annoyed at my egg stealing. This past laying season, they made nests everywhere from their preferred sleeping locations to the rafters on the top of the barn to the bushes in front of the house. They prefer to lay in private locations where they don’t think they will be bothered. They rarely used areas purposely set up for them.

Edited to add: They sometimes would make a large, beautiful, and well-constructed shared nest that all three (including my Rouen) would help build and then would take turns to use (or would squish in together).
Last edited: Dec 5, 2020

I also wanted to mention that my outdoor “duckio” has several stumps that are a couple of feet tall that my ‘Scovy girls (and sometimes Daphne) love to stand on.

I use large branches for my Muscovy ducks. I fastened them wall to wall, and across the corners of the coop at a variety of heights from 2 feet to 6 feet. The females are very fond of them. My first year, I tried preparing what I thought was a lovely nesting box. Totally ignored. The females make their nest in corners of the coop. They often share building and sitting duties.

This is where my Muscovy roost even my drake will get up there. I haven’t seen them use the ladder it’s mainly for some of my elderly hens 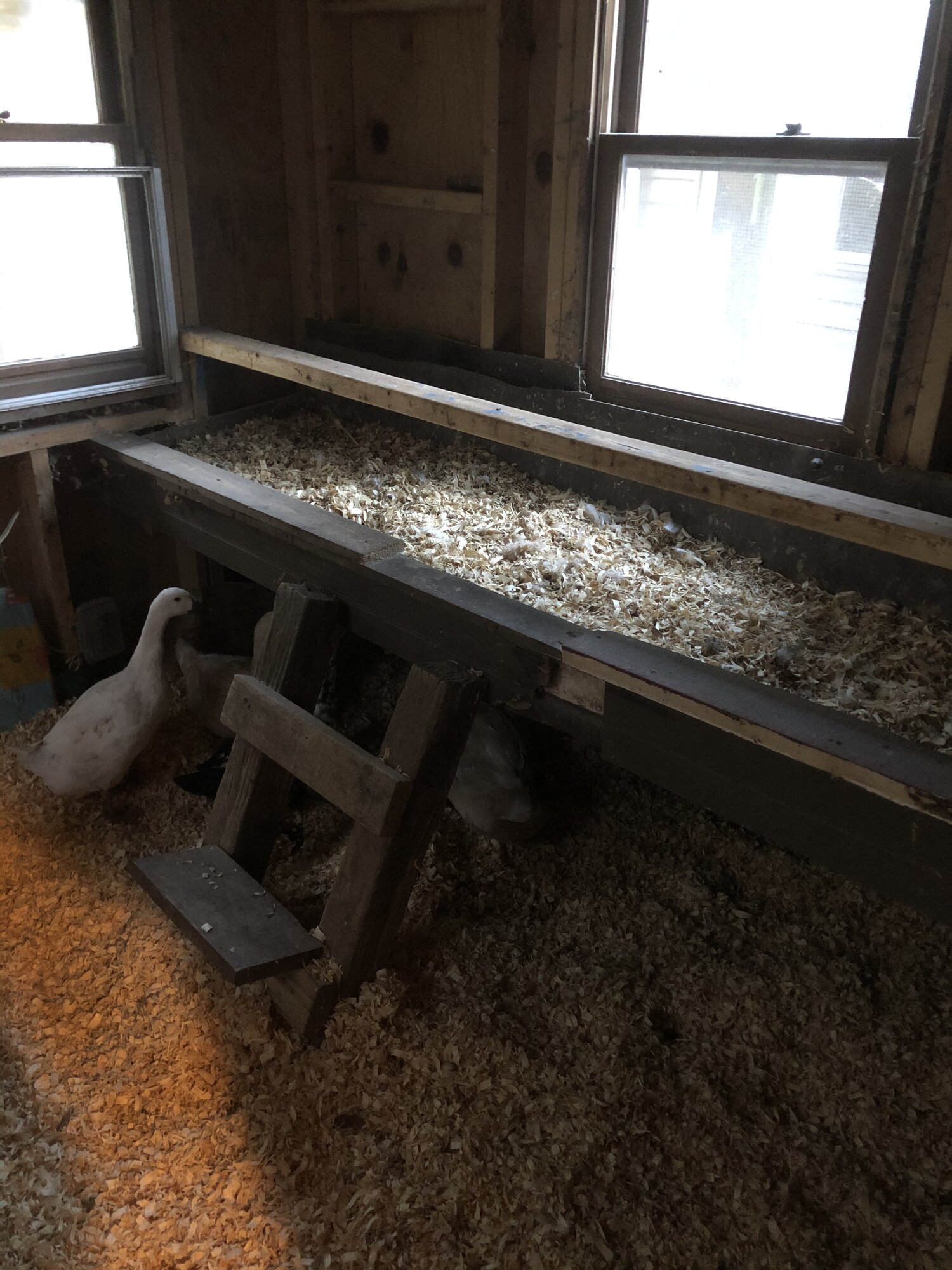