Hi all!
All my birds (8 chickens, 4 ducks) are laying except my muscovy. The ducks make their own nest in the coop and lay there until I let them out and I've been getting 3 duck eggs a day. Yesterday I saw my muscovy jump into the nesting boxes my chickens use and thought maybe she'd curious, she's always had a fascination with the girls when they lay their eggs. But this morning when I opened the coop to let them out she was in the box and jumped out to get out of the coop. I know in the wild muscovies can nest in hallows of trees and such, is she getting ready to lay? She's about 7 months old and we have supplemented light and have been using it since November.

It is possible that she is getting ready to lay. I can not remember what age muscovy ducks start laying, but know they nest any time of year. I used to raise them many years ago and was surprised where and when they might decide to nest. One such place was old fashion milk cans; the kind farmers used before the creation of bulk tanks and other modern methods of storing milk for creameries. They did seem to prefer a closed space unlike the other duck breeds I had at the time.

I have one female Muscovy who likes to jump into the chickens nesting boxes to lay. The rest prefer laying in the shavings in their coop. Mine usually begin laying 8-9 months old.
M

Ok so maybe she's close! On my cameras I can see her going in and out of the boxes every now and then. It's kind of cute! 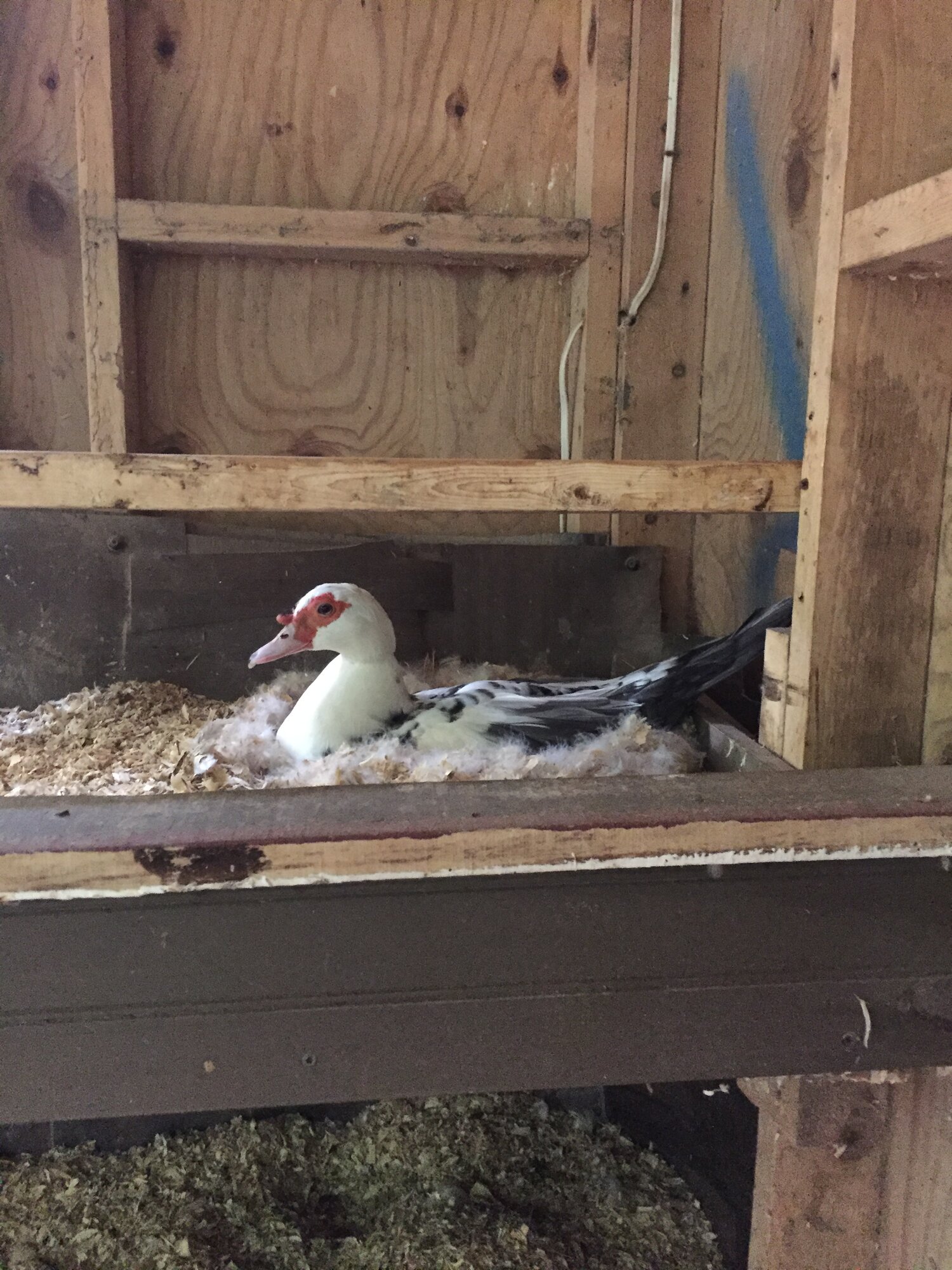 Here's one of my girls who decided to brood on the poop board. At least she didn't have to worry about the chickens pooping on her they gave her an wide berth. lol 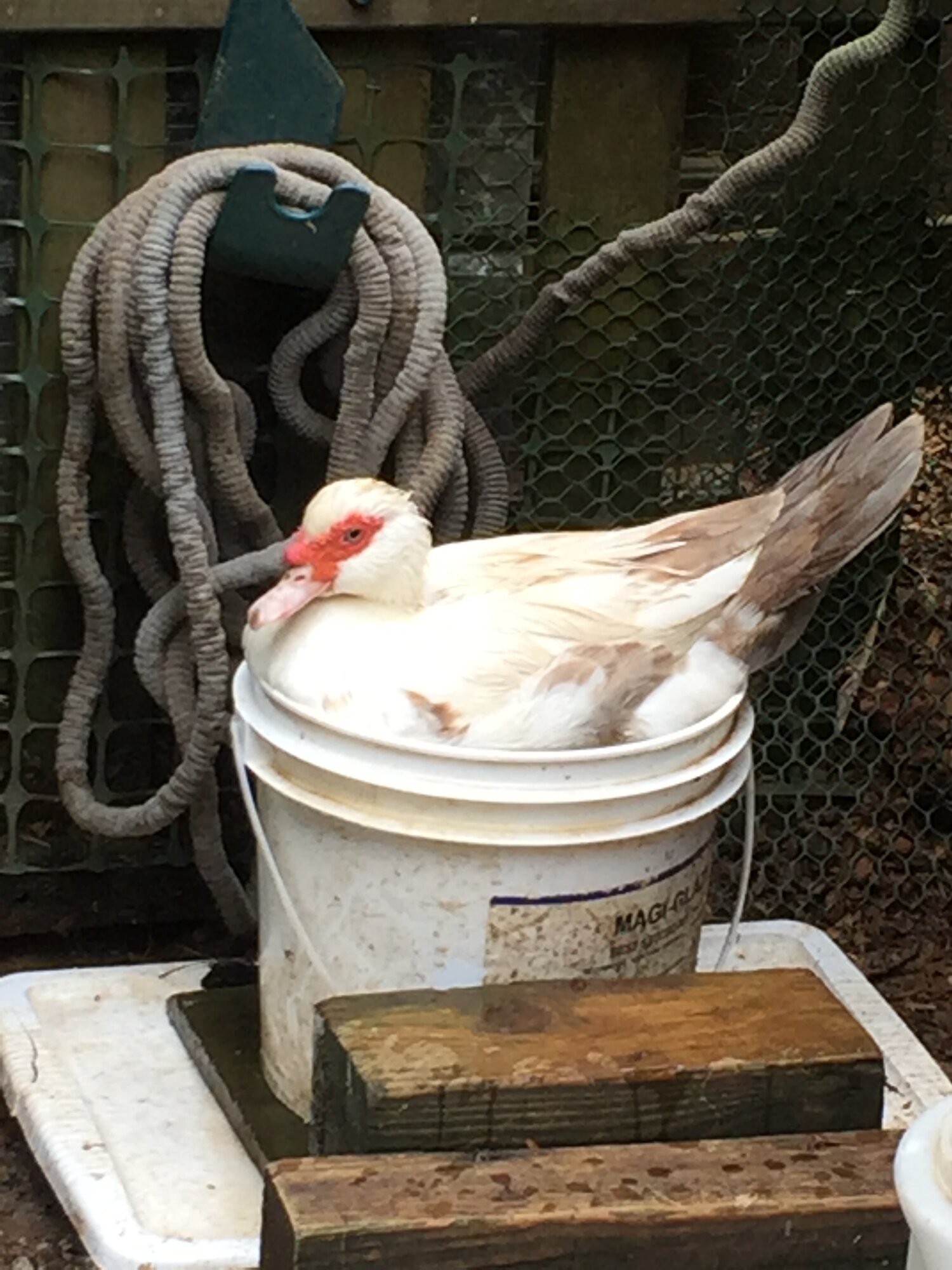 and this one thought it would be fun to try the bucket out. Only problem this bucket was full of water.

Oh my goodness miss Lydia all your ducks are goof balls!

I had a problem rooster here a couple of years ago. I had a tribe of chickens that had recently lost their rooster. The problem rooster started stalking the hens. The hens weren't interested and I was keen that another rooster who incidentally had a limp, would get accepted by these hens.
If you know Muscovies you'll know the female 'i'm coming through' when they want to lay an egg or get a particular place. Not a lot gets in their way.

This Muscovy hen had been laying eggs in the chicken's coop; probably happy with the just female arrangement at the time.
The rogue rooster had been harassing the hens just before roost time and they had all got on their perches to avoid him.
He was standing on the coop ramp when Jenny (the Muscovy) decided that was it for the day and went up the ramp to get to her nest. You could see the rogue rooster thinking about blocking Jenny out of the coop. Jenny didn't even break stride and marched straight for him. He ran. what's more, he never went back. I could just picture him thinking that if there were more like that in the coop maybe he wasn't quite man enough to handle them after all.
The rooster with the limp arrived the next evening; did the can I come into the roost with you actions and calls and on hearing the okay response from the hens gently made his way in and sat on the coop floor just below the hens. A few minutes later Jenny came home. I was expecting to hear rather a lot of noise and see a rooster, or at least most of him I hoped, exit from the coop in a rapid and undignified manner. Not a squeak, and when I looked in later he was still on the floor right in front of the nest box Jenny had taken over. The hens loved him and he died defending them from a hawk.

How funny! and what a good rooster. I lost one from protecting his girls too. My Muscovy really respect my oldest roo. Even my drake will give him space if he comes to the feeder when they are eating. And is his part game bantam so not a large rooster at all.
M

UPDATE:
She laid her first egg this morning!! Right in front of me it was awesome! She opted for the nest the other ducks made in their hay rather than a nesting box. I'm so proud of her!
You must log in or register to reply here.
Share:
Reddit Pinterest Tumblr WhatsApp Email Link