Hi All.
I also have a few questions, similar in nature regarding roosting in the run and/or in the coop. But I have other questions as well. Specifically, integrating the girls to their permanent home.

The questions are at the bottom, but i have to provide the back story and current situation:

Mine, for example, is totally surrounded by 1/2" wire cloth, metal roof, 2 feet of predator proofing all the way around, - very secure. The run space is 24 feet by 8 feet deep, and the coop itself is 8 feet long by 4 feet wide - and is up on stilts. The coop is completely inside the run - also totally enclosed, secure, etc. As the coop is "raised" on stilts, the chicks to hang out under, and the current roost bars are lower than the coop itself. But the girls are young. The auto waterer, feeder and roosts are low, but they will be moved higher as the girls grow. 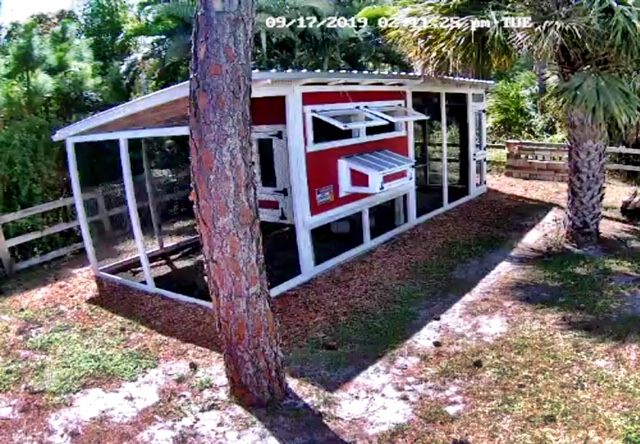 One last thing, the nest boxes in the coop are below the roost bars inside the coop itself. There is a nice long ramp from the coop door down to the ground (not currently shown in the photo where the brooder is). And it is a deep litter system inside the coop. 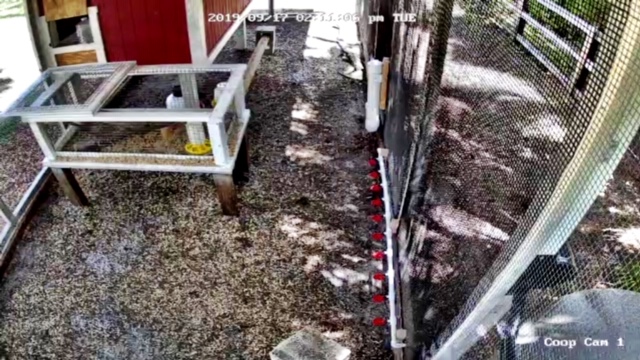 Ultimately, the girls will free range outside their run during the day, but not for a while, and when they do, it will be with supervision for a while. I'm not worried about predators - don't even want to talk about that yet.

Back to the question at hand. I have a dozen chicks, now about 6 weeks old and they are quickly outgrowing their brooder. The brooder is currently inside the run (as seen above), and we lock the girls up at night inside their brooder. They have been outside in the weather for over a week, their new pin feathers are growing in, and no longer do we have heat lamps (we are in south Florida... 80's at night, 90's during the day).

For the last week, we've been letting them roam around their run for about 1/2 of the day and putting them back in their brooder at night. The chicks are getting well socialized and have been handled each day for a little while - they are all pretty sweet (except one we call feisty, but that is a different story).

They are very healthy and happy! Here are three of the little chicks - I have to share this pic. 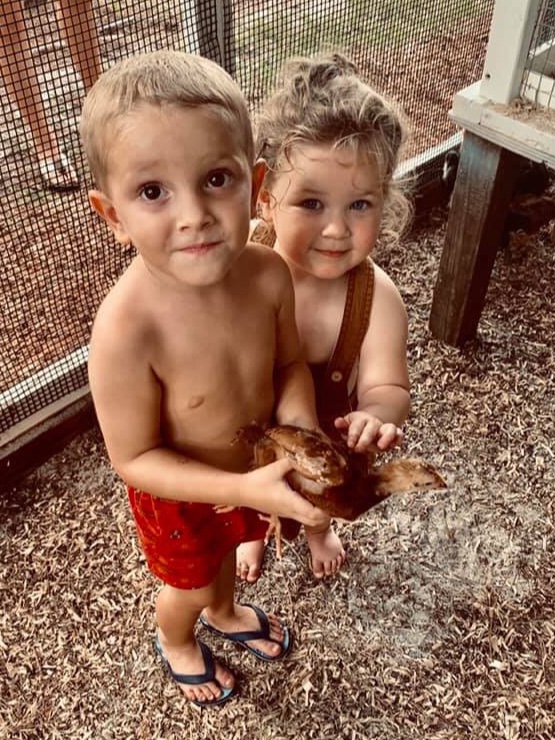 Don't give me grief about their shoes (or bare feet), this was just a quick photo shoot and not the little one's norm. They were washed off quickly and I think this image came out really well. They are also learning how to be gentle and know to wear their "chicken shoes", and wash hands, etc. Kids and chicks, right?

Anyway, back to the questions at hand.... tonight, I was going to remove the brooder from the run area and just have the girls live in their run / big girls coop. Yes, I realize I have to "train them", and lock them inside the coop at night each night for about a week or so until they understand that the big coop is their safe place and where they are to sleep. I will have them go up at dusk, and close the coop door behind them. Then in the am, will open it back up to let them do their stuff.

Note, It is plenty dark at night where they are, and they won't have issues sleeping/roosting at night, even if only in the run.

A few questions
a) During the day, the coop door will stay open allowing them to go up and down the ramp into the coop, etc. I assume that is fine. After the girls are used to their big girl coop, should I close the door to the coop at night? Is it actually necessary? If so, why? Sure, for predators (if one were to get into the run), they would be extra safe if locked inside, but as I said, I'm not really worried about that.

b) The nesting boxes will be covered up, so they cannot go inside the nice small area from within the coop and build bad habits. I don't want them getting used to pooping in there, etc. I was wondering how long they should stay covered up? I was thinking 6 months, or about the time they start laying.

Lots to talk about here. Thoughts?

I wasn't sure if this should be a post or a thread. Either way, here we are.

a) No, you don't HAVE to lock them in at night, if you feel confident in your run security. In my case, I do not, so even though my coop is fully inside the run, I have an auto door that closes each not.

b) I would keep the nest boxes covered until you see signs that a bird is getting closer to point of lay. Reddening and development of combs and wattles, squatting, etc. There isn't an exact time frame and every bird and flock are different.

Cute kids. Its good to get them used to handling the chicks, as you have been doing. Your set up looks fine to me.
The chicks may sleep in a pile in the corner of the coop for a while longer. That's just the way chickens do. They will get up on the roosts to sleep in due time.

I'd remove the brooder, if you haven't already and let them have use of the coop and run all the time. I brood my chicks inside my coop, at 3 - 4 weeks I start integration and they have use of the coop and run with the big girls. My coop is open 24/7, I feel I have a pretty safe set up and sleep well at night. Locking them in the coop at night, is up to you. I would recommend a game camera or 2, if you don't have any. This lets you know what might be lurking around at night and if you see some scratching around the run, you know what it was. I've had fox, raccoons and possums.

I don't / can't close off my nest boxes, because I have a mixed age flock. I've never had a problem with chicks going in them. I would leave them open and see if they go in them before closing them off. Chances are they will go up to the roost, if they can. If it's to high, put a stump, small crate or cinder block for them to jump on first. Mine always liked to roost, they never huddled in a corner at night, but some do. I'd put them on the roost a few nights if they did, to give them the hint to get up there.

No grief about the kids shoes / no shoes, as long as they don't mind chicken poop on their feet, it builds their immune system and washes off.

higgy62 said:
A few questions
a) During the day, the coop door will stay open allowing them to go up and down the ramp into the coop, etc. I assume that is fine. After the girls are used to their big girl coop, should I close the door to the coop at night? Is it actually necessary? If so, why? Sure, for predators (if one were to get into the run), they would be extra safe if locked inside, but as I said, I'm not really worried about that.
Click to expand...

And then.... yes, I wouldn't bother closing the pop door.

HOWEVER, since you 1. Have such a fantastic and very secure roofed run, and 2. Live in Florida with that blazing heat.....

I might just let them roost in the run. Better air flow for the stifling heat.

higgy62 said:
b) The nesting boxes will be covered up, so they cannot go inside the nice small area from within the coop and build bad habits. I don't want them getting used to pooping in there, etc. I was wondering how long they should stay covered up? I was thinking 6 months, or about the time they start laying.
Click to expand...

If you can easily cover up the nest boxes...then I would. And yes, for about 6 months...but watch them for signs of maturity. Once you open the nest boxes up, put a golf ball or fake egg or 2 in the nests to help them figure out where to lay.

higgy62 said:
I wasn't sure if this should be a post or a thread. Either way, here we are.
Click to expand...

Fantastic. All great comments. Thanks so far!

A couple of things.
The smaller brooder is still in there because I have 1 girl still in it - she has been pecking at her vent area (has lost some feathers and has bled a bit). The other girls have been bothering her - so she is quarantined for a few days to heal. She is much better now (that would be another thread). One more day and I'll remove the old brooder from the run.

Yes, I have three video cameras set up - on in the coop, one in the run, and on showing the area around it - looking for predators and other critters.

Now to the next issue:

When do chicks go up ramps into coop (how old)?


As you can see in the video (a 10 second clip):
This is one of the larger blacks. She is really sweet. Anyway, the girls are a little tentative coming down the ramp, but they are getting used to that. All of them let themselves out today by themselves. I screwed on some screening to the ramp to keep it from being so slippery. That seemed to help, however, they do not go up the ramp yet. They are a little curious and jump onto the ramp.

Question - is this normal? When would they start going up the ramp and putting themselves to bed (so to speak) by themselves? I assume this will take time.

The thumbnail below is a snapshot from the chicken run cam. The brooder cage is still there, and the ramp is shown. It is fairly steep, but not really that bad (I don't think so anyway).

Thanks for all the great replies.

What kind of chicks did you get? Are they going to be small chickens or large ones? 8x4 coop is about the right size for 8 chickens, not 12. That ratio of 4 SF per bird might be a little different with smaller chickens. I have orpingtons and it would not be enough space for them. It might make a big difference being in FL where they don't have to be cooped up for long periods. If the coop door is left open they may even choose to roost outside. I don't think you need to worry about whether or not they get on a roosting bar. Some of my hens still prefer to curl up in a corner. And what does it matter really? I let them be comfortable wherever they want to be, except nesting boxes.

Edited to add: the run is plenty large enough, so the coop may be a moot point in FL.