Performance and carcass characteristics of Delaware chickens in comparison with broilers

Performance and carcass characteristics of Delaware chickens in comparison with broilers
https://academic.oup.com/japr/article/23/4/586/834450#14450367 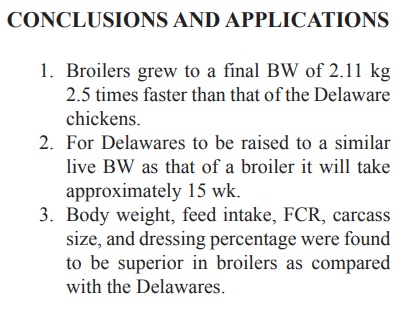 No surprises there. That's what Cornish X Rocks were developed over almost 100 years for. To be faster growing, better feed conversion and with more breast meat than any heritage breed.

ChickenCanoe said:
No surprises there. That's what Cornish X Rocks were developed over almost 100 years for. To be faster growing, better feed conversion and with more breast meat than any heritage breed.
Click to expand...

The Winner of "The Chicken of Tomorrow" contest was awarded to Charles D. Vantress of California who participated with his Cornish/New Hamphire cross males, but that was back in 1948, that was 71 years ago and George Ellis created the Indian River/Delaware in the early 1940s. 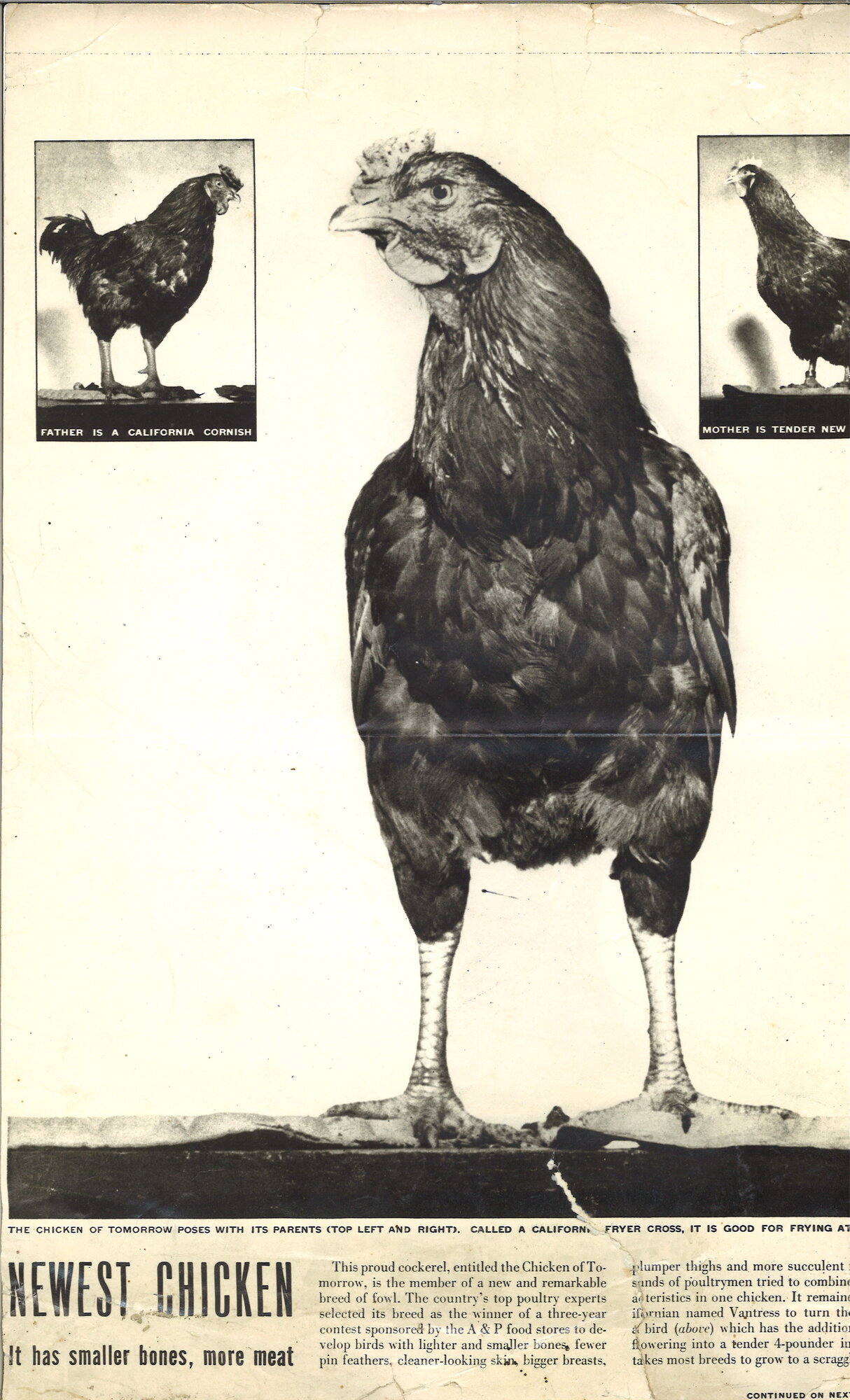 If I could get my Barred Rocks anywhere near a Cornish X at 15 weeks, I'd be really really happy. 4lbs dressed at 16 weeks is basically my goal.

There is no doubt that Delawares would be considered a quality table bird.
I think one thing that is frequently overlooked is that a quality meat bird isn't just about the amount of muscle on the carcass or the feed to meat conversion rate but the flavor of the meat. Cornish X Rocks don't live long enough to develop true chicken flavor. Whereas most heritage birds do. As I see it, a Cornish cross is a meaty but fairly bland meat that can be seasoned any way a chef chooses. Whereas a Delaware, Dorking, Plymouth Rock, Sussex or Java butchered at maturity has enough flavor of its own to only need salt and pepper.

ChickenCanoe said:
There is no doubt that Delawares would be considered a quality table bird.
Click to expand...

Yes ... but raising Delawares, you'll have healthier, less stressed chickens and will be helping save an endangered heritage breed ... besides the fact that they are much nicer eye candy! Economics are definitely a factor, but not the only one!

The 15 week Delaware dressed out to 3 lbs, 6 week "broiler" was 3.25 lbs. The Delaware needed to probably be at least 16 weeks to have the same weight, maybe 17. Interesting that this study was funded by Purina. Raising Delawares would double their sales!

Feed to meat conversion rates are important to all of us. But of utmost importance to big broiler operations. A couple cents savings per bird is huge when you're growing out 100 million birds a year.

What are we asking?
Production methods must be considered. Many factors contribute to performance outcomes in "broiler" production. Yes, Breed is a primary contributor but so is the breed's suitability to the methods of the fowl keeper.

One's methodology is where I find much differing of opinions on breeds and their "performance" virtues and vices. As methods differ so follows differences in opinion. Another difference is simply philosophy in keeping fowl. Penned fowl or Ranged fowl? Grain bins and barns or Grass-fed and pastures. This squabbling is centuries old so with that in mind allow me to offer up why Delawares performs as well as today as a Modern Industrial Broiler (MIB) called the cornish cross.

The MIB is a breed bred for penned rearing model with its higher grain inputs. Read as feed grain very cheap but production space relatively expensive. Where as the "heritage" broiler was a bird historically expected to forage on pastures for the majority of its diet with minimal grain inputs. Read as feed grain relatively expensive but space very cheap.

If we are talking "backyard" birds for meat and we are agreeing to a "Yard" or pasture (not runs, tractors, or growing barns) as integral to the production of said meat.

Now if one is unaware of broiler production on pastures, I'm referring to the esteemed Bresse fowl keeper practices.
https://www.backyardchickens.com/threads/french-standards-for-raising-bresse-meat-chickens.866299/

The model and methods are sound and the principles can be applied to even the small "backyard" meat producer. In this model Delawares have two key performance advantages over the MIB, that being long legs and temperment. Foraging requires drive and mobility. MIB aren't know for there good legs or feet. MIB are also bred to be docile because over crowding causes neurotic behaviors like cannibalism. Delawares get an advantage here as the MIB is generally less active and thereby lacks in supplementing its daily feed intake by foraging.

To the carcass quality question. If a 5 lb cleaned carcass at -10 weeks is "quality" well I guess Delawares and every other breed of chicken beside the MIB are not "quality". If you feel quality is how big the breasts the animal produced were, here to the MIB is the only breed of "quality". On the other hand if you feel the "quality" broiler carcass is more about taste than portion, sustainable practices more profit margins, animal welfare and breeding for structural soundness more than shorter production cycles; then Delawares are still competitive as a broiler breed.

A few things to keep in mind about Delawares:
Breast meat production is not the focus of Delawares it is in the leg quarters.
Delawares reproduce independent of human assistance.
Delawares are a true breed.
Delawares were the broiler industry gold standard prior to the introduction of the MIB.

What meat chickens should I raise? What's the differences?
5 6 7