While BYC was down I had an idea for this thread where folks could post interesting, cool, funny or 'sciency' stuff about pigeons and doves.

I'll start it off with a video link I saved from YouTube. When I watched the 2nd time I was even more in awe of the photography and the birds! Reminds me quite a bit of the work of one of our BYC members. Enjoy.

biophiliac said:
While BYC was down I had an idea for this thread where folks could post interesting, cool, funny or 'sciency' stuff about pigeons and doves
Click to expand...

Sounds like a good idea to me
This is a video done recently on yours truly a while back by our local TV station.

Tthank you for posting on my first and only thread! Its a great video, I was going to pm you to ask you to do that!

Great way to get your pigeons to basket shared by a fellow BYCer Biophiliac. I used shelled unsalted peanuts to train with similar results.

This is an article done by our local paper the Times and Transcript on yours truly.

Ron MacKinnon divides his time between the boards and the birds.
This Moncton native retired from CN in 1996 after a railroad career that included coach cleaner, brakeman, yard foreman, conductor, and finally, yard master.
Following retirement he was in the "apartment business for awhile."
About 11 years ago he got into acting introduced to local theater by a friend, he agreed to help out with a script reading and was offered the part. Most years see him on stage withe Lutes Mountain Heritage Players, and he enjoys that experience.
He also enjoys raising homing pigeons, a hobby he's been involved in for many years - returning with renewed enthusiasm to the pastime once his granddaughter, Kamecha, became interested.
"My pigeons are Belgium, bloodline and they're rock doves. That's what their formal name would be, but everybody calls them pigeons - and pigeons are not native to North America. Anything you see is a feral that got away on someone"
MacKinnon does white dove (pigeon) releases at weddings, funerals, Remembrance Day ceremonies, the Sussex Balloon festival, and more, and the (banded) birds quickly fly back to his Lutes Mountain home. He says nobody really understands why the pigeons return with such accuracy, although MacKinnon's theory is that they become "magnetized to home."They also have to be trained.
"You've got to get them young: stresses MacKinnon, and then you have to have a loft for them outside, with access... There is a trapping mechanism, so I can let them out and they can free fly, then they come in and trap and then they can't get back out...Right now my birds are out flying around."
Also called carrier or messenger pigeons, these birds were used to great advantage on the front line of both world wars. MacKinnon's grandfather Arnie MacKinnon , fought in the First World War and his father Murray MacKinnon was a member of the Second world War's special forces the Devil's Brigade, and both saw pigeons used in this way. In fact, There is a Victoria Cross equivalent for animals, the Dicken Medal, that has been bestowed upon pigeons 32 times for outstanding wartime service.
MacKinnon now has nine pigeons, down from last year's 40 because " over the the winter, raccoons got in and brought me down to four."
Other hobbies include playing the guitar and singing, vegetable gardening, hunting and fishing.
MacKinnon and his wife Petrechia (half of the famous musical Gaynor twins) have three grown children Darren, Shannon, and Tammy and two granddaughters (make it three now on came along without my permission just recently I might add.)
Endearingly unique and enjoying every minute of it. MacKinnon once went barefoot for an entire year, during which time he observed that "salt really hurts your feet in the winter."
When it comes to observations about life, he has three favourites "Grandmothers and grandfathers should never retire they should live to inspire; Love is a verb, not a noun;"and "we do not live in a perfect world."
Last edited: May 21, 2017

How about some science news?

...and a real life example of Pigeon Culture!

Well I got a new solid white pigeon a few days ago through Social Media. Some one outside the city caught it and my name came up and Easy Peasy Japaneasey it was gifted to me.
It had no band and was definitely a young bird lost during training is my guess. I put a marker band on her just in case the rightful owner should come out of the wood work (she is he bird to the far right)
left clicking on the image will enlarge it 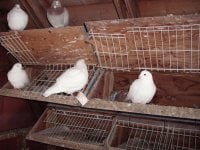 Pigeon fanciers seem to be loosing more birds on tosses lately whether it is related to cell phones signals or weather related the jury is still out.

Heads up this article has a gallery of 4 pictures.

Scruffy Stunted pigeon.. will he ever look good?