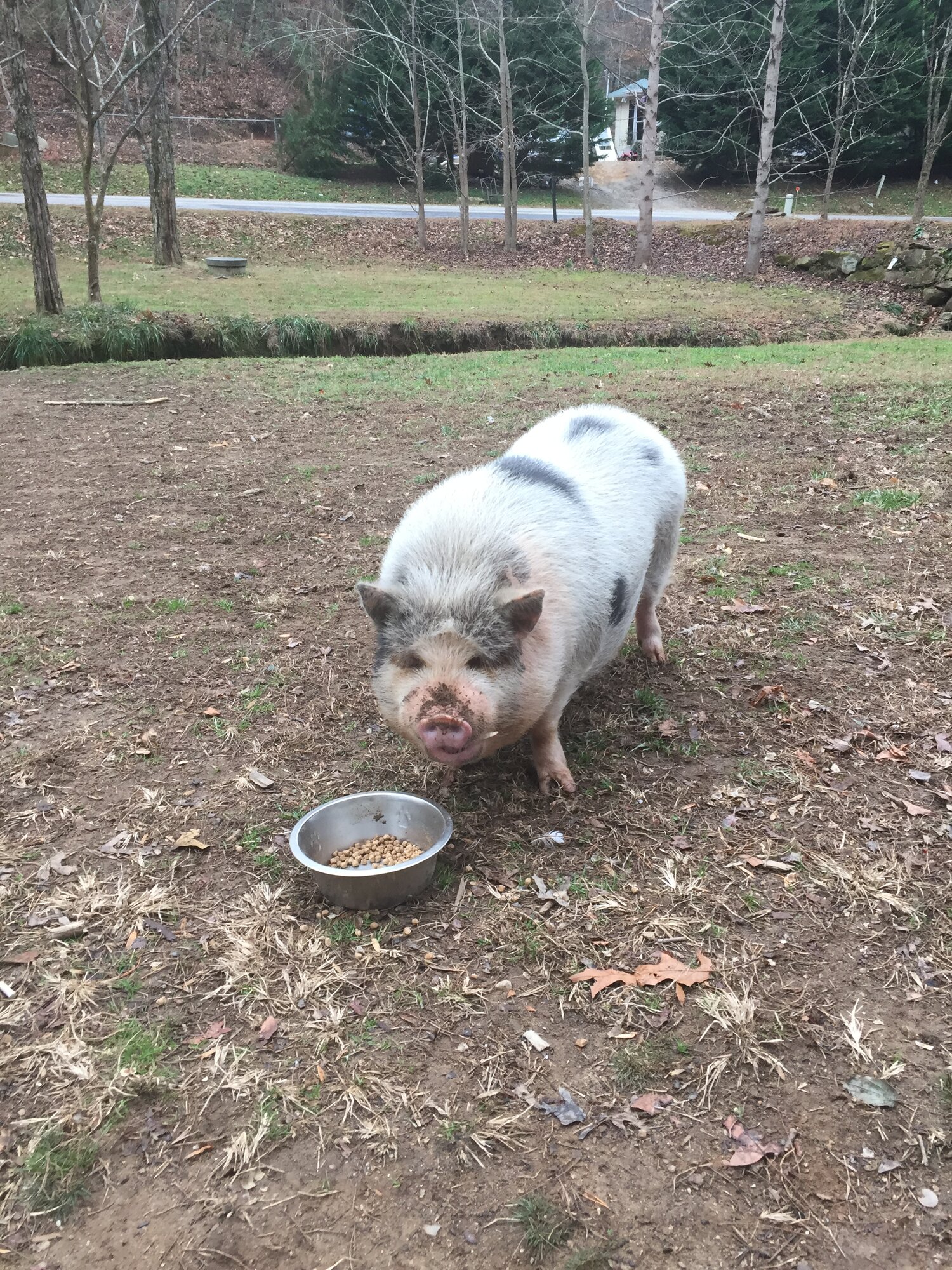 Hello everyone, I am in a certain situation and was hoping some of you on BYC could maybe give me some advice. My neighbors “found” a pig they’ve planned on butchering for over a year now, they swore he was a feral pig (I knew absolutely not to be the case, I’m from Florida where we would regularly hunt them). He lives in a total mud pit with a dog house that’s too small. Well he’s been escaping and has basically shacked up at my house, he’s outside my front door every morning and follows me around like a dog in the yard. He also likes eating my ducks food, and I’ve even began petting him and scratching his ears which he loves. He has scabs all over him and his eyes are so gunked I’m not sure how he can see. I’ve never had a pig, or really wanted one, or had any experience with them but I feel for him and want to help. After doing some research I am fairly confident he is a pot belly and not a meat breed, but I will post a pic to verify. I’d guess he’s about 70 lbs.

Also, I have three dogs and am wondering if there’s anything they could pick up from him illness wise. Do they need vaccines? I did read they need their hooves trimmed, and I’m thinking it’s a male because I’ve noticed cutters on him. I won’t lie since I have no experience I’ve been a little wary of him and wondering if he will bite me, but so far he’s been nothing but really friendly and seems glad to have someone to pay him any attention. I was going to pick up a bale of straw and set up a bed in my barn for him to snuggle in because he was in my ducks pen last night, probably trying to stay warm.

Any and all advice welcome! I still have to talk to them to convince them to let him stay with me, but I think it’s a real possibility.

atomic said:
Also, I have three dogs and am wondering if there’s anything they could pick up from him illness wise. Do they need vaccines?
Click to expand...

You are correct that is not a typical meat pig... though it would be edible, just on a smaller scale.

Boys would have a scrotum in the rear under their tail if they were unfixed, and their pee comes out around mid belly. Verses a female pee comes out back near the tail. Both genders can get the tusks you speak of and is an indicator that piggy is several years old.

Sometimes scabs and excessive itchiness can be caused by mites... which worming (to treat mites) is the only thing given to pet pigs according to my vet. Often injectable Ivermectin, given orally in water is the preferred treatment. Pigs can catch quite a few human things, but they don't transmit much to dogs. My pigs (the female) are always pushy to my dogs, putting themselves at risk essentially. My dogs are very tolerant but I am working on separation so my dogs can get some peace when they just wanna relax.

That pig does look a bit overweight (for a pet). If you are able to consider getting some pig feed (it runs around $15/50# bag) instead of dog or duck feed.. he would be much healthier due to getting the correct nutrients for the species. Folks feeding to fatten don't care so much about life span or quality there of.

The toes nails don't look too long from what I can see.

This is a great resource with tons of information...
https://www.minipiginfo.com/

If that pig isn't already bitey at you, it probably will not. When scratching... a rhythmic grunt is a sign of contentedness, most often achieved when scratching between the two from legs in the chest area for me. When I scratch my girls face side (only one side) she is touchy about it's more like (almost) a growl... more of longer lower grunt... like building up to a warning that includes head swinging to the side, mouth open but not a true bite(gnnnnn-rah). It's really a warning that that's uncomfortable for them. So just a form of communication and not the same as actual aggression.

Now my female pig is very territorial, jealous, and uhm... piggy! She totally charges and chases the other animals (chickens etc) away from where she is grazing or getting love. She maintains her own personal bubble. But every animal is an individual.

I wonder if he happens to be micro chipped?

You are correct there is nothing feral about that pig or he would have nothing to do with you. As prey animals in their core they are very skittish.

If you are able to welcome the pig, despite never planning or even wanting one, that's awesome as it clearly chooses you and knows you are gentile soul!

The gunky eyes might be an indicator of mites or it could just be from never having them wiped down and cleaned?? My pigs get eye boogers and my females eyes water badly in the sun. So I do help keep them cleaned out since I can see it. In summer time they love a kiddie pool.

And yes... pigs are social animals who do enjoy being cozy at night. When I had only one, I used a heating pad. With two, I imagine they help keep each other warm. But hay is definitely insulating and easy to burrow in.

Hope this is helpful some!

It sounds to me like the pig has picked you and you may have a pig whether you want him or not. The mites are not hard to get rid of. I would feed him a food made for potbellies and not standard hog feed. The last will make him far too fat. It would probably work though if you limit the amount he gets and supplement with roughages like vegetables sweet potatoes, etc. I once had a friend that had a potbelly but hers was pretty good sized. The pig ran loose around the farm with the dogs and they all slept together on an enclosed back porch. They went in and out through a doggy door. I don't know what she fed hers. Pigs make really good pets. They are smart and they can be very affectionate.

You've got a Potbelly for sure. I've raised them in the past. I can tell you from experienced they aren't worth butchering. There is more fat than meat.

I don't know a lot about pigs but I know a potbelly when I see one. They don't get very big for a pig, and they can be butchered but are actually lard pigs not meat pigs, so great for putting on a lot of fat for rendering and making into soaps or lard.

Maybe by 'feral' they meant 'dumped' or 'ownerless' like most feral cats.

He is so adorable! I don’t know much about pigs but he certainly is cute!

Thank you everyone! The responses were particularly helpful. I spoke to the neighbor and they don’t seem to have an issue with me keeping the pig. However I think my dogs may have scared him, but I have no qualms as they are used to my ducks; so they also will be to the pig. Tomorrow I’m going to pick up some straw and clear him a space in my barn. I’ve had horses before and am familiar with worming, I’ll get it done.

Those sores might be something called Dippity Pig syndrome due to stress, no joke. I think Potbellied pigs and a few other breeds are susceptible to the virus. A bud of mine had one of his Poland Chinas come down with it, it eventually cleared up on it's own, but watch for infection.

Best of Luck.! And by the way, if things don't work out, I know for a fact that they make good breakfast sausage....

I really don't know much about them, except that obesity is a big problem. Do some research (as you are doing) and contact a large animal veterinarian too. Have a fecal run, and any vaccines he needs.
He's really cute!
Mary

I so appreciate everyone’s insight! I knew this was the right place to ask. I did have a couple more questions though.

My barn has an open side and it’s not fenced off where I was going to make his straw bed, we do have bobcats and bears... do you think they would bother him? I’ve had pics of both in the barn and while the bobcat wanted the ducks, the bear could’ve easily had them but ignored them. I do have the ducks area fully fenced top to bottom but it wouldn’t stand a bear I wouldn’t think if he was determined. This morning piggy was out front to greet me like he has the past few, he follows me really closely talking to me which is a little unsettling but I am getting used to him. I’ll feel more comfortable once I learn pig body language. I still am not sure what gender it is, but regardless should I look into getting him spayed/neutered? There aren’t any other pigs around. And also how cold is cold for them? I have a blanket that’s too big for my dog but I bet would fit the pig. It was 30 when I woke up this morning.
You must log in or register to reply here.
Share:
Reddit Pinterest Tumblr WhatsApp Email Link