Anyway, I had a couple of funkies that were surprising. Egg #1 was found outside in the run (which was odd because there is no secluded area in there- someone speculated the new layer got caught off guard). It was very cold, not frozen but not all that far off, and was an extremely pale almost white egg. Figured it was the cold and moved on, til...

Egg #2- the same pale color as egg #1. Collected out of the nest box this morning along with several others.

And finally, egg #3. This one was (I kid you not) a pale orange creamsicle type color! As in, a pale version of orange creme ice cream! I also suspect this was my newest layer, as a) she spent a good long while in there, and b) the egg color.

Now, I know that hatchery stock RIR's may not be 100% RIR genetically. One has paler breast feathers that are almost honey-colored. But the rest range from a deep rust to a dark mahogany color, and several even have blackish-green tailfeathers (no, they're not roos. All pullets) and blackish-red hackles. The orange egg layer was one of these- I got the egg after she FINALLY left the nest 1.5 hours later (I was sweeping and cleaning up the "human" area of the chicken shed/coop, then came in made lunch, went back out to check and she was still there...).

Now, logically I would guess that MAYBE the almost white ones might have come from the lightest-feathered one Fluffbun (was Fluffy but my 6 year old changed the name. She's honestly the only one that has a set name because she's the only one we can actually identify, due to the slightly lighter feathers). She was more yellow than red as a chick too, so clearly a mix of something (to be fair, we ordered 10 got 12 and all survived so who knows if she was one of the "freebies" or not).

But the orange one??? Anyone else ever have an orange egg??? And why would a RIR pullet with dark mahogany feathers lay an orange one and not a brown one?

I have 6 PBRs. They all lay different colors of eggs ranging from a light beige to almost purple, but they're all "brown" eggs.

Hang on. I will post a pic in a few minutes.

could be something they ate.
it can affect taste too.

Had some trouble getting my camera to get an accurate color exposure shot, but this was the best I can do. All are eggs from my 12 RIR pullets. Bottom 4 were funky- one had as much brown as white (heavily speckled), two were very, very pale, and the one on the right bottom is the orange creamsicle one. 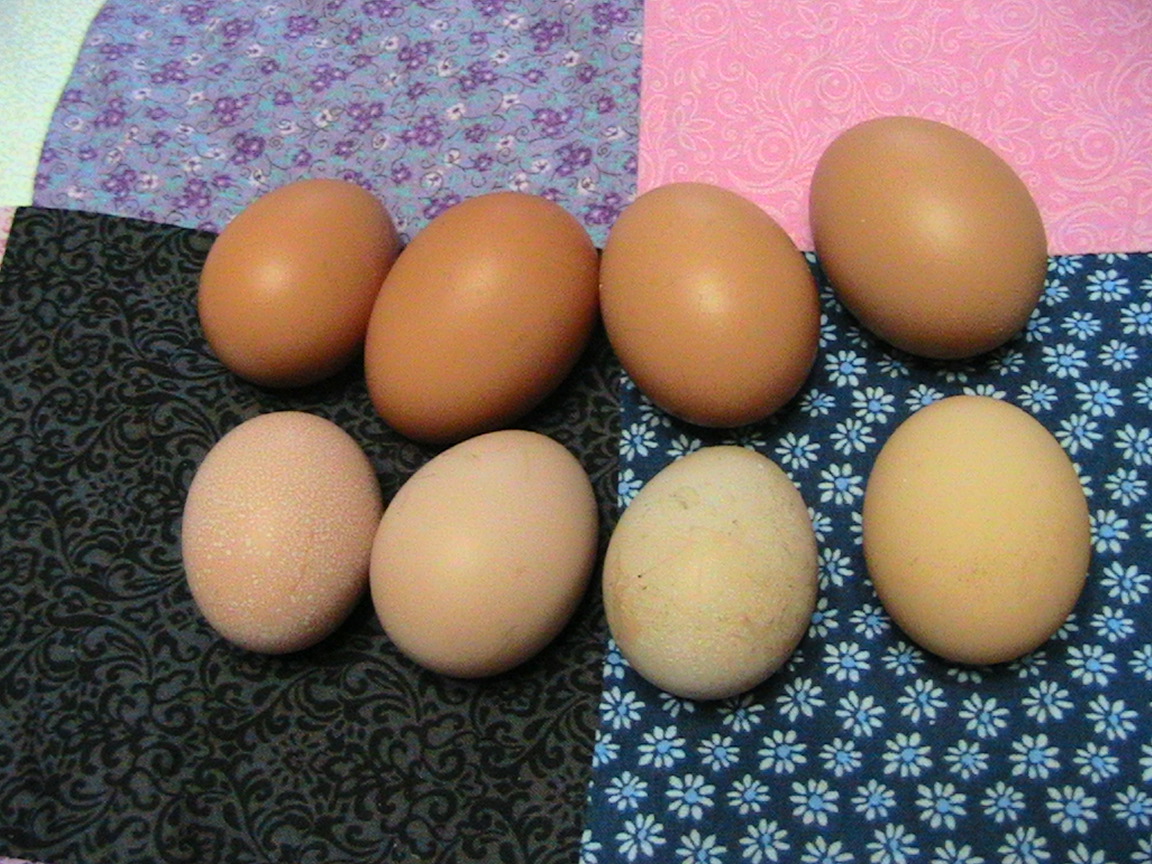 OldEnglishGameBantam33 said:
could be something they ate.
it can affect taste too.
Click to expand...

How is something they ate influencing eggshell color? I thought that was a natural pigment secreted in their shell gland?

Chickens are full of surprises, lol.....as soon as you think you've figured them out, it all changes...enjoy your multi colored eggs, the Orange is lovely...

SueT said:
Chickens are full of surprises, lol.....as soon as you think you've figured them out, it all changes...enjoy your multi colored eggs, the Orange is lovely...
Click to expand...

Don't get me wrong- it is

I'll let y'all know how it tastes tomorrow morning

I did have to wash that one because, despite clean bedding in the nest box, bits of straw seemed almost glued to it. Thought that was a bit weird too.

What up with the randomly white egg?

M
Are these Icelandic pullet eggs?