Seeking Warmth in Full-sun When Not Feeling Well

To of my game stags (young roosters about 7 months old) got into a serious scrap. When I found them they were exhausted to the point that neither could see or stand. It appears an old American Dominique Cockerel found them and beat them down further just before I found them. I thought both were a loss. I placed each in a location protected from the wind and not two hot or cold. Heads, wings and even feet were swollen on both. Both were effectively blind for about 3 days and they would not eat during that interval. They did show limited interest in water. Weight loss was considerable. Over last three days they can see again and are starting to show interest in food although not eating much. Heads are still swollen. One has been released near house to hang with dogs. He still favors is feet a little (actually soreness likely higher up). He is going out of his way to avoid wind while staying in the sun, much more than other free-range birds around the barn that are not having issues. He is also fighting an infection associated with the wattles. Recovery expected to be complete even though both birds still walking very slowly. The preference for sun is really strong.

Interesting. They are absorbing vitamin D as they lie in the sun. This must assist in healing.

azygous said:
Interesting. They are absorbing vitamin D as they lie in the sun. This must assist in healing.
Click to expand...

I think energy conservation is part of it. Temperature here a few degrees below freezing. Vitamin D may also be important although I do not know if it is needed more during the healing process.

His feathers a looking crappy because he has not been investing in their maintenance lately. I will pull him off roost in a bit to check him out.

Some of my chooks like to park themselves by the south facing foundation on sunny cold days. One girl who lost all of her butt feathers while molting would point her butt towards the sun. There's no end to their entertainment.

These are pictures of his head. His wattles are noticeably distended with a rubbery material inside and they are warmer than on other roosters with similar sizes wattles. He is running a fever or is directing more blood flow to those tissues. He has no crop fill despite being out free-ranging all day with feed put out for him. He is going to get some babying. Part of the horn on his upper bill appears to have fallen off. The clotted blood between eyes and nares was something that became apparent yesterday. 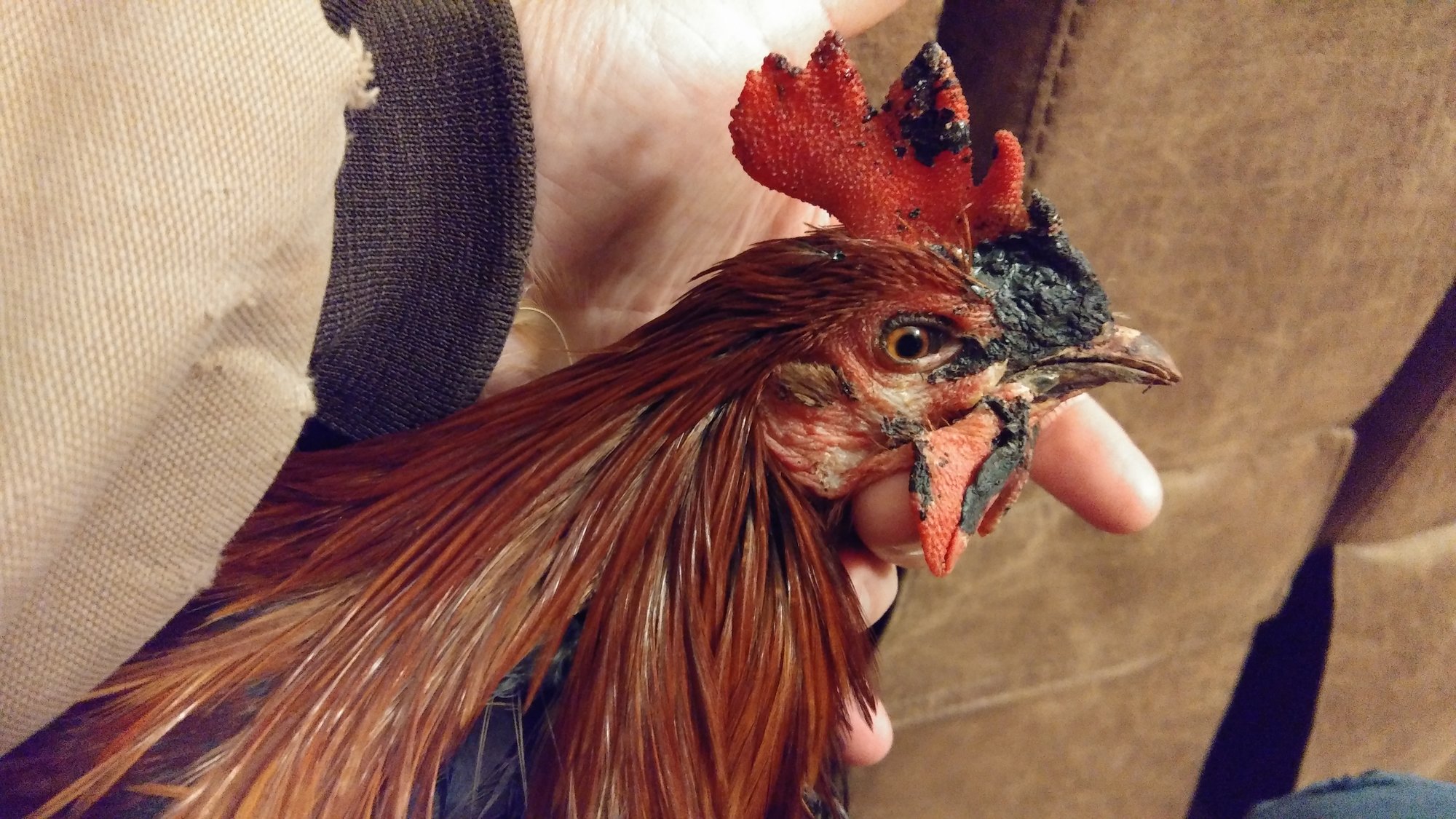 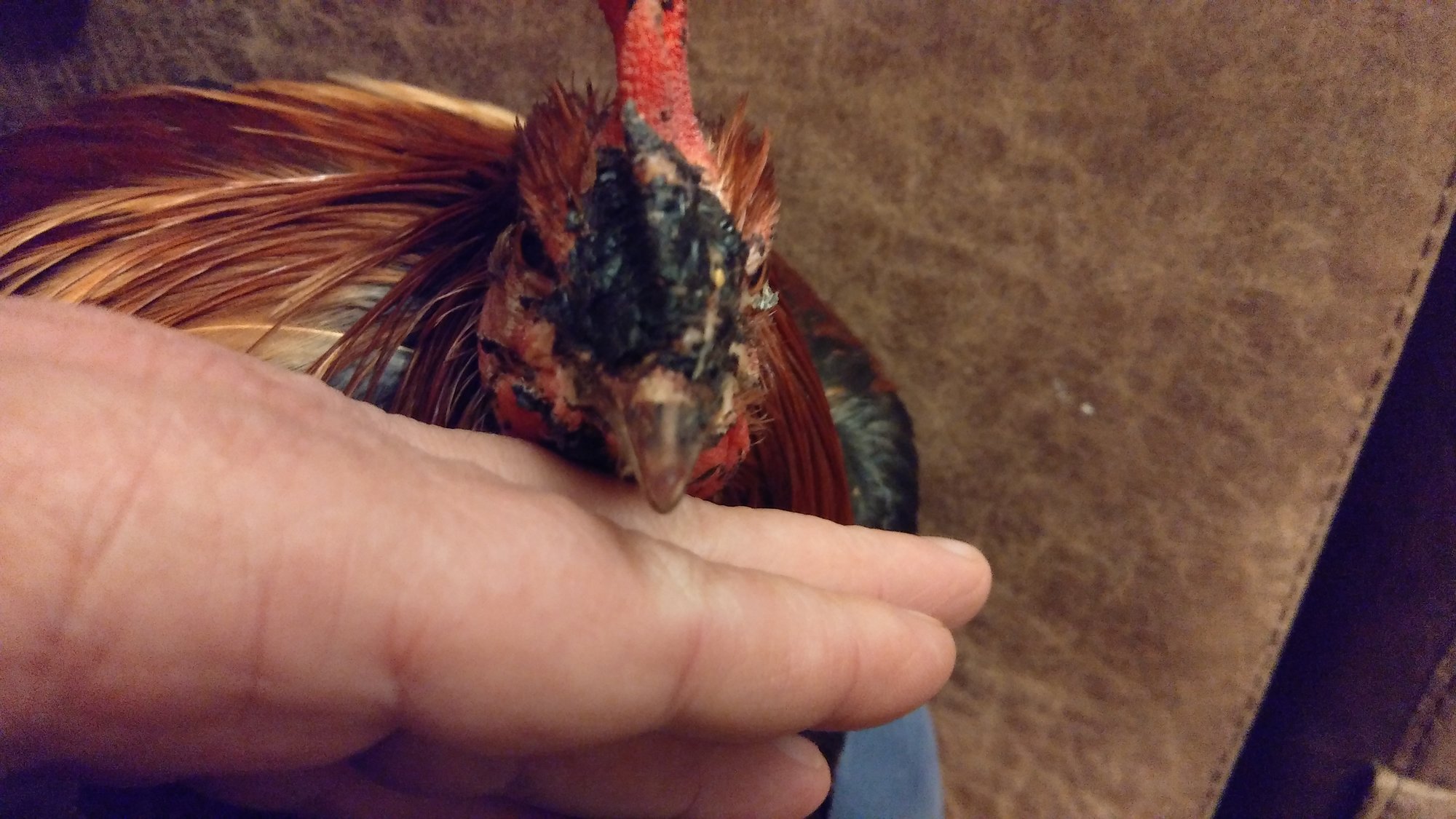 I have to post this part. As I was typing he went to sleep on my leg. See his head tucked under feathers above wing with only comb poking out. 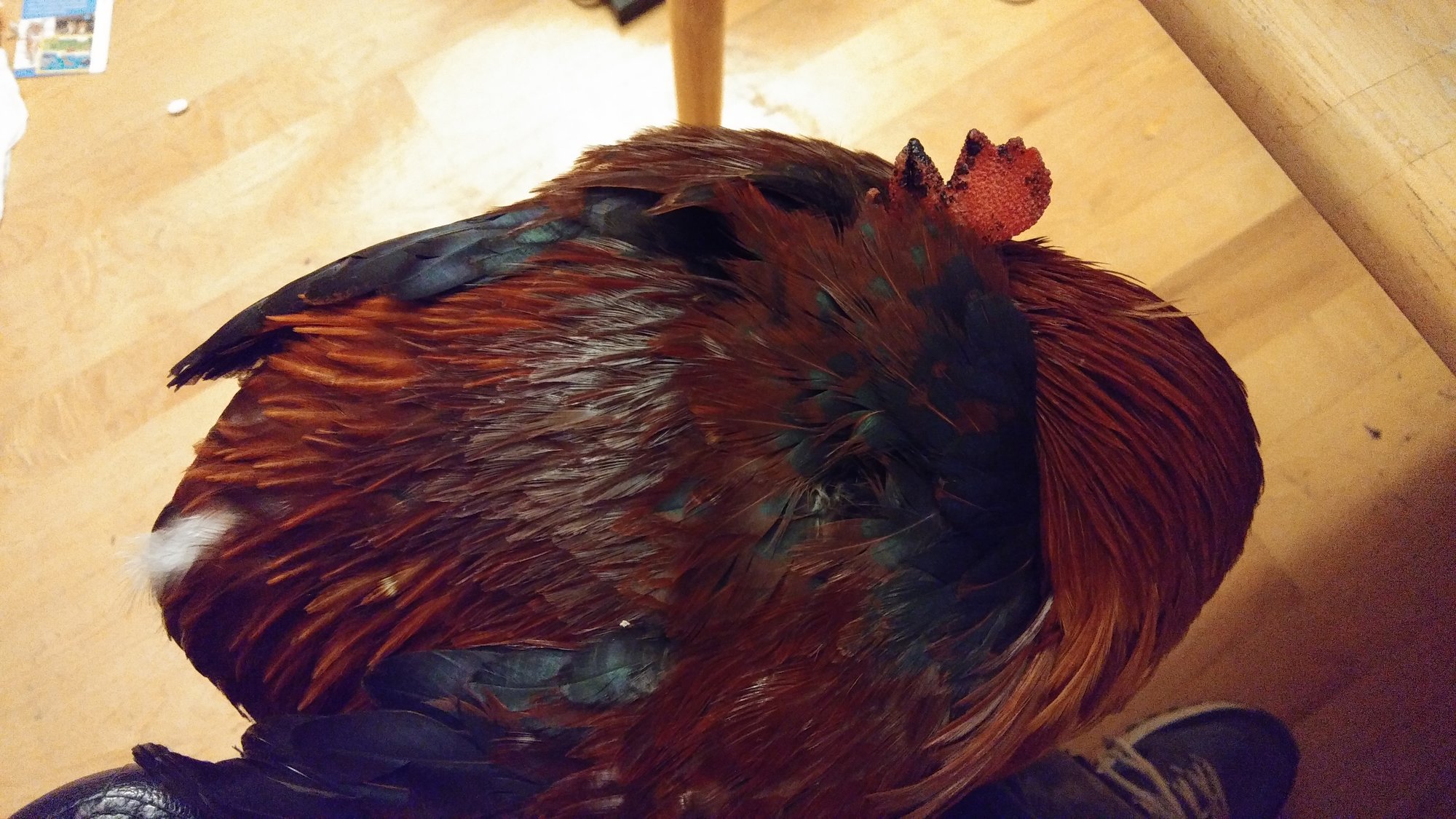 What a little opportunist! Must mean he's recovering.

Roos sure do love to destroy each other. Years ago, I had a pair that dismantled each other whenever they had the opportunity.

azygous said:
What a little opportunist! Must mean he's recovering.

Roos sure do love to destroy each other. Years ago, I had a pair that dismantled each other whenever they had the opportunity.
Click to expand...

Not a chance. Those two roosters of mine were two of the most docile breeds there are, Cochin and Brahma, and the only way it was resolved is when some dogs ate the Cochin.

Now the two roos I have are directly related and have a very smooth-running relationship. Peace reigns. Sigh.

Do yours shake their heads back and forth after a beatdown (like mine do)? I guess that's their way of showing they are in pain.

What do you do when an old hen is just not integrating well with a new flock?