I found my blue silkie cockeral splayed out on his side in his cage just now. He shares it wis his pullet sister.

I've got him outside in the sun, & he is eating & drinking fine. I've been watching him & he has been preening but seems off balance when he reaches around to his backside. When I brought him in last night, I thought he was limping, but he seemed ok this morning, & he was crowing, & standing up.

Only thought I have is it is a head injury, as he is low on the pecking order, and the others chase him & his sister. He's made a couple attempts to stand but just plops right back down.

I've checked him over for a leg injury, but he seems in no distress when I handle him.

Anyone have any other thoughts on what this might be. (Off balance & unable to stand up)
Last edited: Sep 18, 2008

Sounds like a head injury to me. I had a hen doing sort of the same thing a few weeks ago. She would lean to the side, hunker down, and wouldn't move. Took her a few days to get over.

Take him out, give him a private cage, and treat him with Vitamin E. If he has a vaulted skull he may have a little swelling, so he shouldn't be with other birds for fear of further injury....

My birds normally are only together in the run, as they all have individual cages inside the house. He is the only one to share a cage with his sister, as the will squawk if I seperate them.

I plan on putting him in my emergency hospital carrier tonite, & will see how he is tomorrow.

I'll take him to the vet if he still can't stand.

Its not always other birds that injur them. I think my hen injured herself by jumping to high too hard and hitting her head on the roof of her coop.

And now that I am re-reading you post again, have you check his leg to make sure that IT isn't injured in some way?

Which leg is he limping on, the left?

Ok, since having him outside, he did manage to get up a few times and walk. Very unsteady & fell over with wings flapping.

He's eating drinking & pooping ok. The thing is when you pick him up & put him down, his legs stick straight out. He won't tuck them under his body like a normal chook will.

I've got him inside & seperated from the others. I checked out his legs again, & it doesn't seem to hurt him when I moved them.

I'm thinking head injury or he has eaten something toxic. Hopefully tomorrow he will have improved some more. At least he was able to stand & take a few shaky steps.

I'll be taking him to the vet tomorrow if there is no further improvement. This just sucks. He's my only roo.

I'm thinking head/spine injury like most of the others. I've had a few young silkie
hens get injuries like that but never a roo and never with those exact symptoms.

The way you described it says he's not favoring one leg. If both legs are acting
identicle it eliminates a leg injury.

I'm sorry, LCRT. I know your chickens mean alot to you. I can't guess what it is. A stroke? I'm glad you're taking him to the vet tomorrow. At least you might get an answer.

When Penny got so sick this is how she sat: 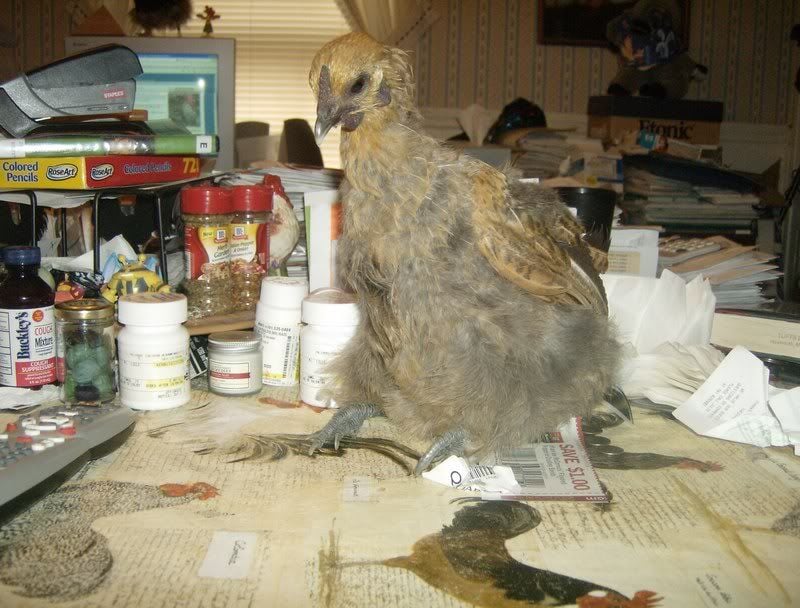 Thanks for the input everyone. It's dark here & I just checked on him. Still breathing. Gonna be a long night with me checking on him every couple of hours. I'm still thinking head injury, cause I would expect one of the other's to show the same symptoms if it was something he ate. They have have a show coming up, so they have been confined to their cages or the run with no free ranging going on for the past week. Hopefully he will improved by tomorrow.

Reminds me of when I was a kid & got run over. I had a concussion & those darn nurses kept waking me up every hour & shining a flashlight in my eyes.

A
Rooster attacked by his on offspring