Starting over after a 30 year hiatus

Hello from York, Maine, MacTech here, starting over with chickens, and this time, doing it right, I hope...

As a kid, we kept chickens, late 1970's, leghorns, sex links, Rhode Island reds, kept in a chicken wire yard on ground picked and pecked to the bare dirt, at that time, chickens were egg machines, not pets, just food makers, they got basic chicken feed, and occasional handfuls of grass, they never left their penned area....

Now, in an effort to combat the tick population, I decided to get back into chicken keeping, AND to go free range/pasture this time, my sister free ranges her flock, and the eggs are amazingly good, fluorescent Orange yolks, absolutely delicious, and you can't beat fresh from the hens....

It worked! And welcome to BYC I'm new to this website so we could probably learn stuff together

Welcome to BYC. Glad you decided to join our flock. I agree that no eggs are as good as fresh eggs from your own hens. Please feel free to ask any questions you may have. We are here to help in any way we can. What kind of chickens do you plan on getting?

Okay,that seems to work now, so onto the meat of the post...

As I said up thread, we have major tick problems here, the cats need them removed nearly daily, and we lost Dad early last year to Chronic Lyme disease that was misdiagnosed for three years as early Parkinson's (but that's a subject for a different thread, suffice to say I have a murderous hatred of ticks)

We got a 3 year old rescue dog last October, Cooper, a Portueguese Water Dog, and I don't want him to get Lyme either, so we needed a natural way to combat ticks without resorting to the cacophony of guinea fowl, chickens seemed the next best bet, as my sister has a boarding stable and her house on our land (50 acres of mostly hay fields), and she rarely had tick problems...

So, in early May, when I was pulling ticks crawling on me off almost daily at work, all from a quick walk over mown lawn, I had had enough, it was time for some chickens.

I stopped off at the Dover NH Agway and picked up six assorted chicks, three Buff Orpingtons, an "Aurcana" (more probably an Easter egger as she has tail feathers and no ruff', but she has blue-green legs) and two Partridge Plymouth Rocks.

They're now hearty, hardy New England birds, nicely cold tolerant, and big and healthy, the photos below are a few months out of date, they're bigger now, yet still haven't laid a single egg, one of the PPR's was camera shy in the group shot, pity though as she's a nearly perfect genetic example, with a nice tall comb and wattles, I thoght she might actually be a rooster, but no Spurs, and she has the hen feathering 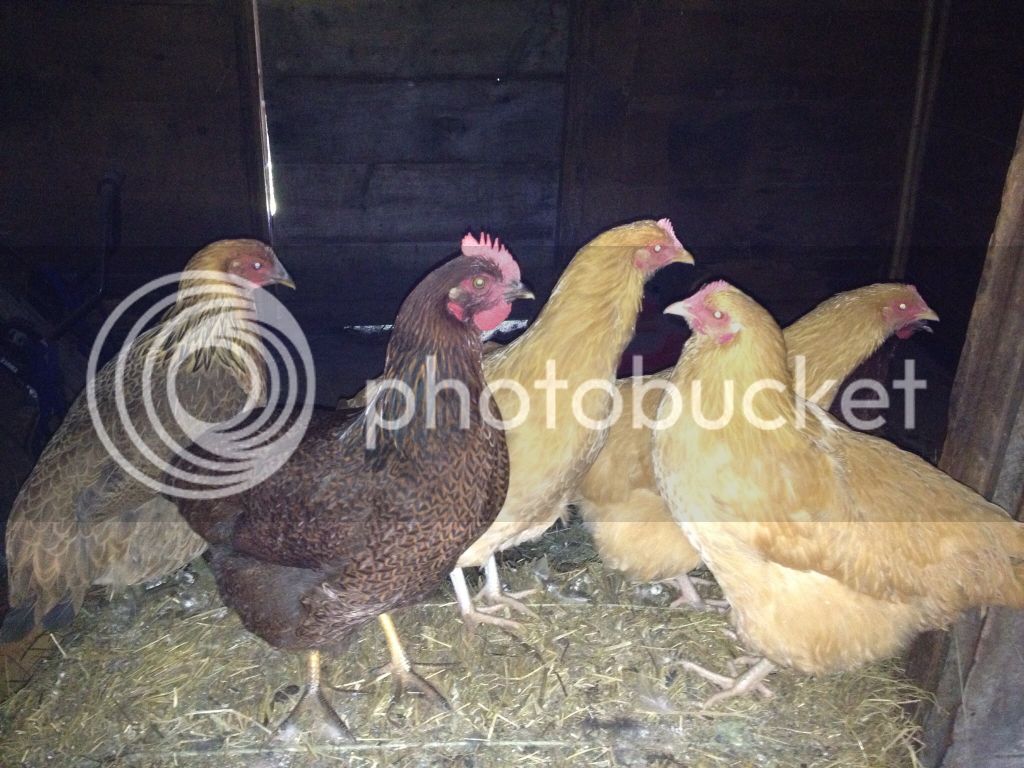 This is a picture of Chiana, my "aurcana" 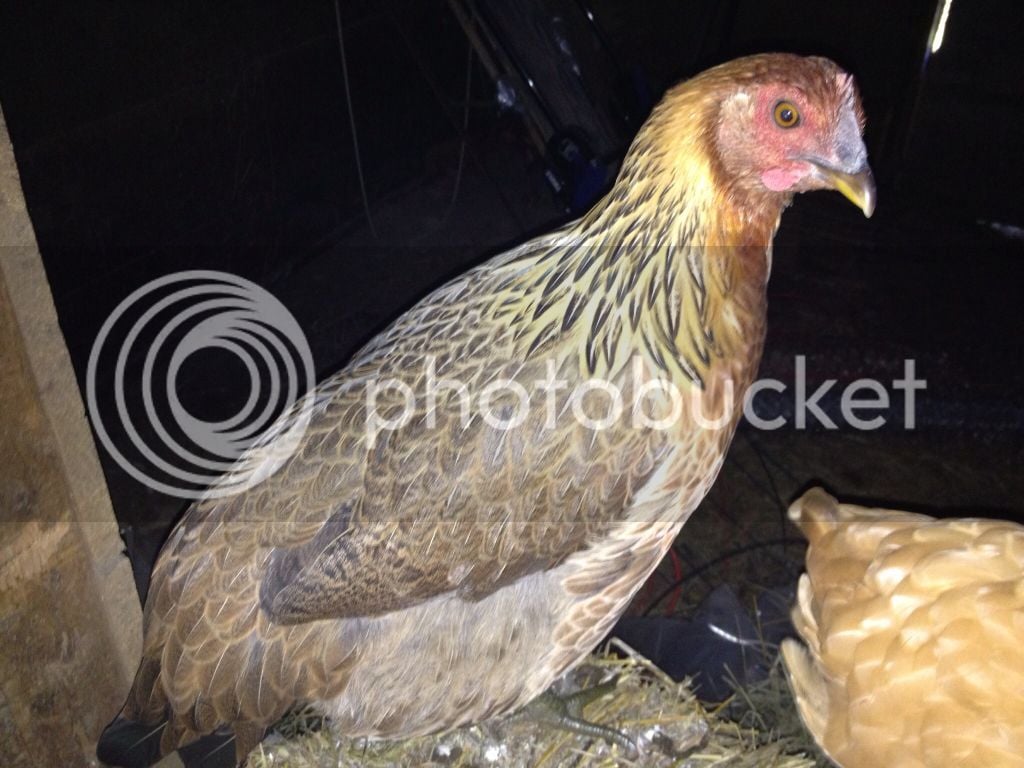 And Sunday, we added another chicken to the flock, one from my sisters flock, a cross between a black silkie hen, and partridge Cochin rooster, we re not sure if it's a rooster or hen, sis thinks its a roo due to the tail feathers starting to arc its mostly silkie feathering but with just enough hard wing feathers to allow short flights, and a "Mohawk" instead of a pompadour 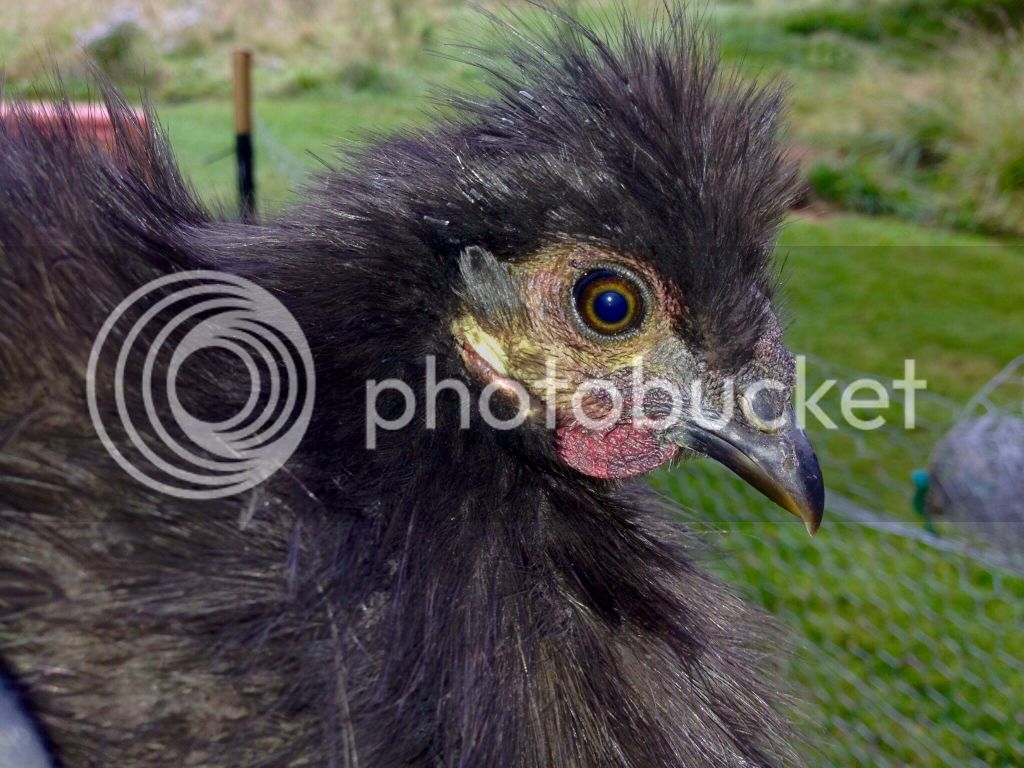 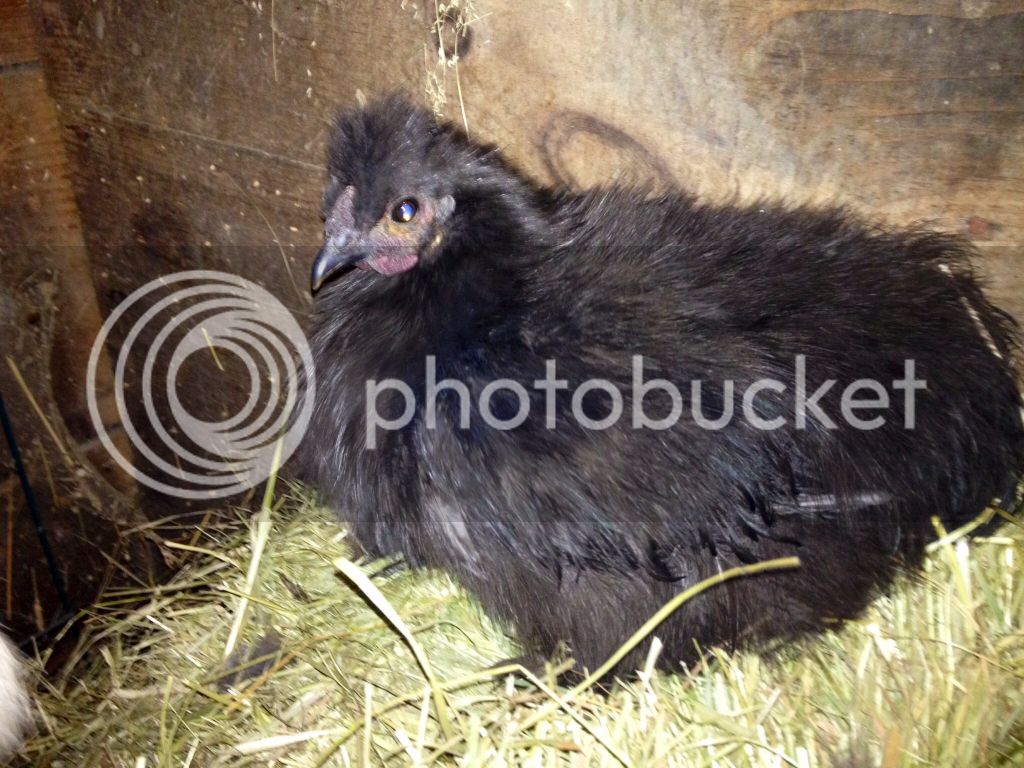 Looks like part 2 is pending moderator approval for my photobucket links, let me try just a couple images of my newest chicken with the import images option on "Tribble" is a Black Bantam silkie / partridge bantam Cochin cross, not,sure if it's male or female yet

They have free reign of our lawn (5+ acres with plenty of hiding spots from overhead predators) and are free range/pastured, very spoiled birds

Nice looking flock - how are the chickens doing regarding the tick situation? I don't know if chickens are that crazy about ticks, they like a variety of bugs/worms. Guineas are the tick specialists and while they do make an awful racket, they are great as alarm systems, if you don't mind a lot of false alarms.

Do you mean those one spot tick killer products don't work? They didn't have them in my day. I had to de-tick them myself. Just hate ticks.

You have a nice mixed flock. I have raised Buff Orpingtons for years and they are wonderful birds; hardy, friendly and gentle (my children, and now my granddaughter, made lap pets of them), and good layer of large brown eggs. Our Easter Eggers are my granddaughter's (pictured in my avatar) favorite. She loves their colored eggs. Good luck with your flock.

drumstick diva said:
Nice looking flock  - how are the chickens doing regarding the tick situation?   I don't know if chickens are that crazy about ticks, they like a variety of bugs/worms.   Guineas are the tick specialists and while they do make an awful racket,  they are great as alarm systems, if you don't mind  a lot of false alarms.

Do you mean those one spot tick killer products don't work?   They didn't have them in my day.  I had to de-tick them myself.  Just hate ticks.
Click to expand...

Well, ever since the flock started free ranging, I haven't found a single tick on myself, Cooper, or the cats, as far as the spot treatments, they seem to work, but they also get washed off easily, and since Cooper loves to swim in the pond, the treatments are less effective, they do make a flea and tick repellent that is a chewable, goes into the bloodstream, and so far, that seems to work well too

Healthy Chicken suddenly dies after having a seizure
2 3

I Have Some Questions

Out of the trough & into the coop

Anyone have success free ranging with labs?
2