Something very sad happened last night.. I lost my sweet little Hodgins(gosling). After chekcing her over i decided that there must have been something wrong, "medically", with her. She was 10 days old and still hadn't lost her egg tooth and was still quite small considering her age. I was devistated this morning when i found her but decided that i needed to get a new baby soon before the ducklings decided they didn't like geese....


I stopped by a local feed store this morning to pick up 1 new gosling. when we got there i saw the goslings and picked one little African baby out but wanted to see what else they had.... banties, iowa blues, pheasents, ducklings, big filthy feather-picked goslings, chicks.... WTH???

The poor babies! i handed the little guy off to my sister who was with me and started looking over all 8 of these huge goslings that were sitting in this filthy little tub that was WAY too small. they also had a long red chick feeder for thier food which just doesn't work for them once they get over a certain size. They must have all been around 1+ month old.... I was just so disgusted.

I checked them all over and picked out the worst 2 babies, put them in a box and took them to the front to ask someone about them. I showed them to her and she carelessly said "oh, the little picked babies"

A different girl rung me up and while she was doing so actually told me that they have to give them baths when they get big like that but they hate it. I just know i was looking at her like she was a moron. The poor babies were caked with crap and sawdust from their bedding, their bills were all crusty and they were flat out filthy. One of them was actually stained pink from blood running down her neck, her neck still had scabs all over it.

I ended up coming home with 1 male African & 1 female White Chinese. they were very sweet in the car and she even stretched out across my coat and fell asleep, happy to have room to do so i am sure. They're resting now in a clean pen with hay to chew, clean water and greens to eat. They already seem happier, but i know they'll feel better after they start growing those feathers back in. 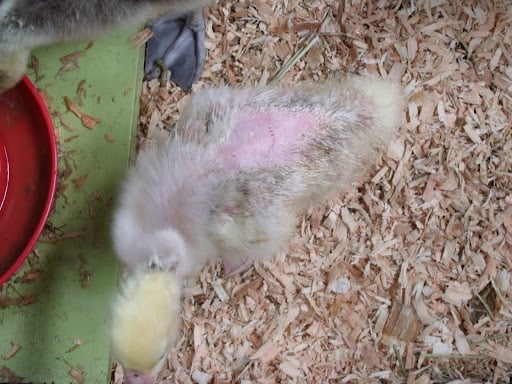 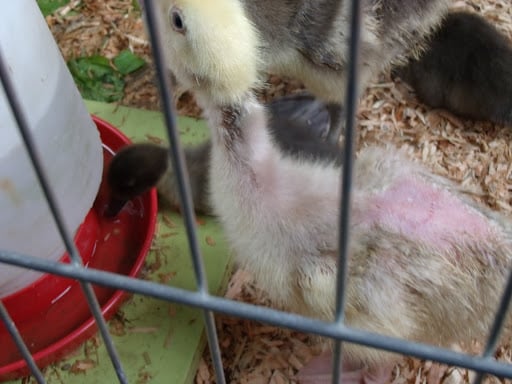 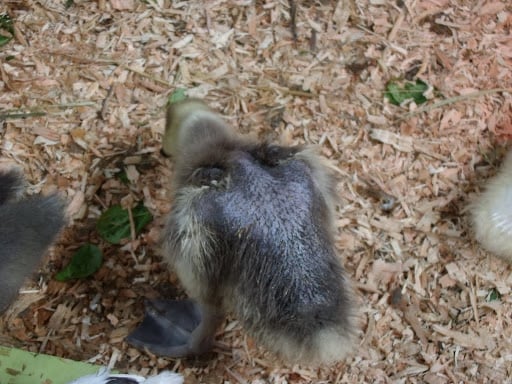 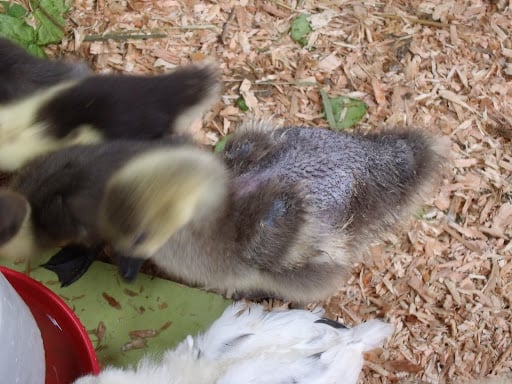 Oh gosh! I'm really happy you saved the babies that you could. It's so horrible when the stores don't care about what they have and hire people that are totally incompetent to take care of them

I told my husband the other day that once he gets a huge raise or a better job and I can quit I would love to have a job at several local feed stores so that I can educate people and the employees on proper care of chicks, ducks, goslings etc. Good luck with your new babies, it sounds like they are going to have an amazing life with you.

Those poor babies. So glad you got them out of there. Make sure you keep us updated on their progress, I want to see how beautiful they turn out with some good care.

Thanks guys. They did pretty good with their bath. I did use warm water though, I imagine they were just using cold water at the store, could you imagine being half naked and 100 degrees and dropped into cold water? i wouldnt like it either. They're preening themselves now.

I think I may be wrong on the breed of the girl, I noticed a few spots of silver-colored down on her back(around the bald spot)... her bill looks Chinese but maybe i'm wrong. just happy shes not in that tub anymore, sad I couldn't afford to get anymore though.

Thank goodness you took them! I still feel bad for the ones left though! maybe someone like you will rescue them as well...I would if I were close!

what darling babies !!! So good of you to rescue them !!!!! They will have a good home with you !

Oh my GOSH! What horrible employees. You would think that a farm store would hire people that actually know what they are doing, but no they just let these ignorant people take care of these fragile things and they do a horrible job. Bless you for saving these little babies! They will have a much better life with you, I just know it!

Wish I would have been there I would have given them a peice of my mind. I know the employees dont know any better, but it would have been a perfect opportunity to give them a lesson in taking care of them. Especially since next year they might be there as well, and it will be the exact same. They are adorable though!

Bleenie - thank you for doing this for the babies. I'm proud of you.

OH MY GOSH! I can't beleive they have down missing! I would go to the manager of the store and tell them!
That is animal abuse! I would seriously think about calling someone about them!

It's very kind of you for buying them and giving them a nice home!

These ducks look rough! Any insight or advise??
2 3