This morning, the "prisoners" were protesting about their confinement - running their beaks across the wires like inmates beating the cell bars in a prison movie. Mind you, their "run" is larger than some apartments... Anyways, when I got home I let them out for a while, supervised.

Buffy the egg-layer, and her buddies Willow and Stella, were out in the backyard, tearing up the grass and generally having a good time. Ernest, the dog, follows them around to see what they're up to. The girls just walk away from him when they get tired of him sniffing their butts.

Rowdy, our tabby cat who has treed raccoons in the past, is more prone to rushing them, causing quite the squacking and flapping of wings, after which he walks away acting all innocent. 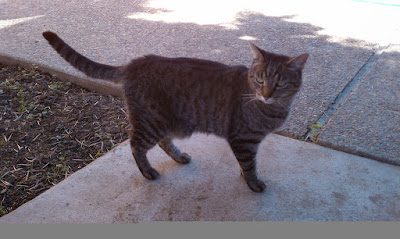 After a while, Ernest decided it was time to round them up and herd them back into the coop. Free time over. ;-)

LOL That is too funny!

My dog, Molly, seems to have the need to herd my chooks, but I finally figured out how to teach her when to and when not to! LOL