After so many years with us, I felt it would be wrong of me not to write anything about Twisty. Twisty had been through so much and I have so many memories associated with her as part of my flock that it's hard to know just where to start.

Twisty had started to internally lay at some point late in the summer of this year. I recognized the signs because I had had two sexlinks go through the same thing. As it got worse and worse, I found myself stuck with a very difficult decision: when would it be Twisty's time to go? She was still bright-eyed and behaving like any other chicken would, but she was slowing down and her comb had already begun to flop over. Today, as I was working outside, I kept noticing her, just sitting in the same spot with her eyes closed, clearly uncomfortable. Today was the right time. I couldn't let her go on like this.

Mom and I went out to the chicken yard to find her. She was poking around a dust bath as if she might try to bathe in it. She still had enough fight in her to flee when mom tried to grab her. I ended up getting her from under the boat. She was thin by the feel of her breastbone, and yet she had that swollen abdomen from internally laying. I gave her one last pet and a nice wattle rub, and then I let mom walk past me with her.

Watching mom walk away with the bird I had just sentenced to death was the hardest part. I couldn't even get up the courage to go with her and see it happen.


Twisty arrived on our little hobby farm years ago. She was one of a group of 10 point-of-lay Rhode Island red pullets that someone just didn't want. Because her comb was so twisty, that's what I called her.

A year or two later, in 2008, Twisty became our first successful broody hen, having hatched five chicks around the fourth of July that year. Only two survived their first night, but Twisty was a wonderful mother for them. Here she is with her babies (this is a bad picture, but it's all I have from the time) : After raising those two chicks (one of which she, herself, outlived), Twisty had become the mama hen of the flock. She would always be the one to put youngin's in their place, especially if it involved the nest boxes. This is Twisty schooling a young Merlin about nest box etiquette: 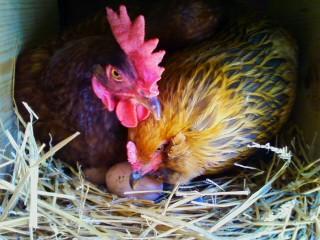 We would always catch Twisty cleaning the younger birds' beaks. This led to many funny poses as the younger birds stood paralyzed in fear while Twisty just pecked away every scrap of dirt from their faces. 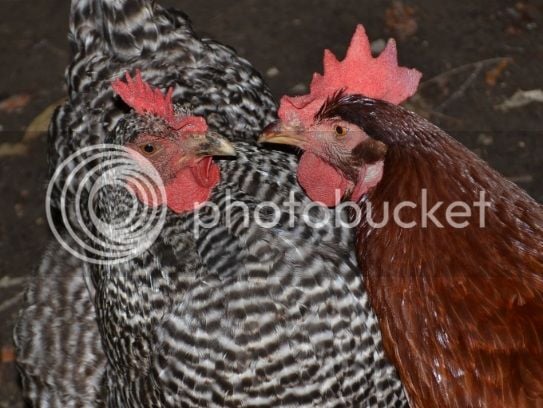 Sometimes, Twisty used me as a nestbox... Other times, I was a good target for a stink-eye. 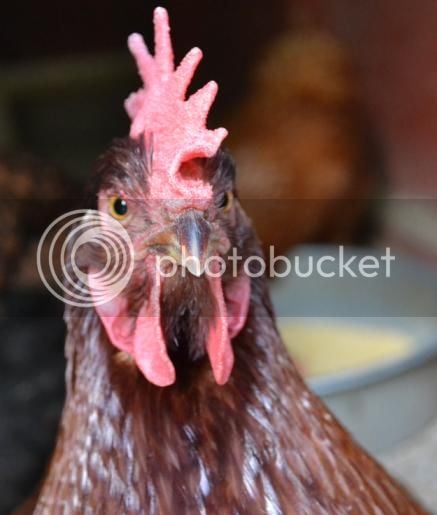 ...Twisty was not a touchy-feely bird, but she was still one of my flock and as such, she was beloved. Without her, it definitely feels as if something is missing out there in the chicken yard...

Rest in peace, Twisty. ...I hope I made the right decision for you.

I bet she had a wonderful life with you. You seem to really love your birds, so I know you made the best decision you could, and it definitely seems to be the right one. She sure was beautiful, as are all your girls! I'm loving your 100 picture thread.

So sorry for your loss. That is always the hardest part of animal keeping.......she had a good life with you.

I'm so sorry to hear of your loss. She most certainly was a beautiful hen!

I love her comb. You did right by not allowing her to suffer. Sorry for your loss.

Thank you all for your kind words.

If you couldn't tell, I was still feeling pretty torn up about my choice at the time of writing that first post. I have had some sleep and a day to reflect on it, and I now feel better about it. Twisty was old and had lived her life, and I know there wasn't any coming back from how far her internal laying had progressed. I am glad that I chose to give her a quick and (hopefully) painless death rather than the long, slow, and agonizing one she would have faced otherwise.

I'm also glad I have somewhere to post crazy-chicken-lady things like this to people that actually understand.

I know what you mean about the crazy chicken lady posts! hahaha Sometimes I get all excited about something and run in to tell my family and they are all

Yup. I know exactly what all of you mean by the crazy-chicken-lady posts. I'll tell my family some news about the chickens and their reply is: "They're chickens...

Pipd, I am so sorry for your loss, but you did the right thing not letting the hen suffer.