What did you name your Rooster?

I love this so much! I have LOTS of roosters and cockerels too. I always get a, "What?! You've got that many roosters?!" anytime someone asks me how many boys I have. It's different whenever they're in bachelor flocks, but most people don't think about that or don't know about that. This makes me feel so much better

HeatherKellyB said:
I love this so much! I have LOTS of roosters and cockerels too. I always get a, "What?! You've got that many roosters?!" anytime someone asks me how many boys I have. It's different whenever they're in bachelor flocks, but most people don't think about that or don't know about that. This makes me feel so much better
Click to expand...

You're welcome.
I need a Bachelor Pad, but can't build one yet.

For some reason I find this HILARIOUS XD. Did it fit him?

Reuben, Winston, Murphy, Roscoe, and Russell are just names I like.

Winter was broody hatched and I didn't know if he was a boy or a girl, so I picked a neutral, but fitting name. He's a white Silkie, so Winter.

Achernar and Rigel, along with their siblings, were named after stars.

Buzz got his name for chasing a big ol' horse fly as a tiny baby. I jokingly called him Buzz and it stuck.

Gus is named after another rooster of the same breed that I had a few years ago. The original Gus was only here for about a month before he passed away suddenly. The current Gus is going strong and probably my favorite rooster so far, such a sweet, lovable lug. ❤

And Rosey, Troll, Louis, and Feldon were named by some (non-chicken-owning) friends of mine.

I love cockerels and roosters! My favorite big guy (we have mostly bantams after 2 out of 3 of my first boys are/were human aggressive) has the absolute worst name ever and it's "KnotHead" but as a chick, he had a huge knot where his comb was sprouting. He knows his name very well come treat time. I also like the boy names
Le'Shawn
Finley
Sage
RoX
Archie
Blue
Zane
Manny
Zeion (zee on)
Rudy Roo

Bigbluefrog said:
We just got our rooster, so far I called him Pretty boy, Big boy, Sugar daddy.
no real name yet, hope to be inspired by your stories and names.
He is a 7 months old Buff Orpington. View attachment 2423466
Click to expand...

Of course I am biased, but I think he looks like a Roody. Or Huckleberry Finn or Tom Sawyer. I like long book names.

SBFChickenGirl said:
For some reason I find this HILARIOUS XD. Did it fit him?
Click to expand...

Oh yes. It definitely did.

I have, and have had, several roosters. Here are the living ones, including my guineas:
Zapraska
Neutrophil
Hemoglobin
Spook
Snidely
Tourettes

Jimmy Chimney Chicken, who in my defense was named by a 2 year old, I asked him what should I name this chicken? He said chimney. This was my favorite rooster and chicken, I've ever had he was so tame and friendly, and one day I just found him. No known cause. So sad.

And Peanut Butter, an ISA brown I still have.

Greg was a charity case that needed a home. I had him for 4 years before finally getting sick of his

I didn't have a breeding use for him so he went to a couple that absolutely love his dastardly disposition. 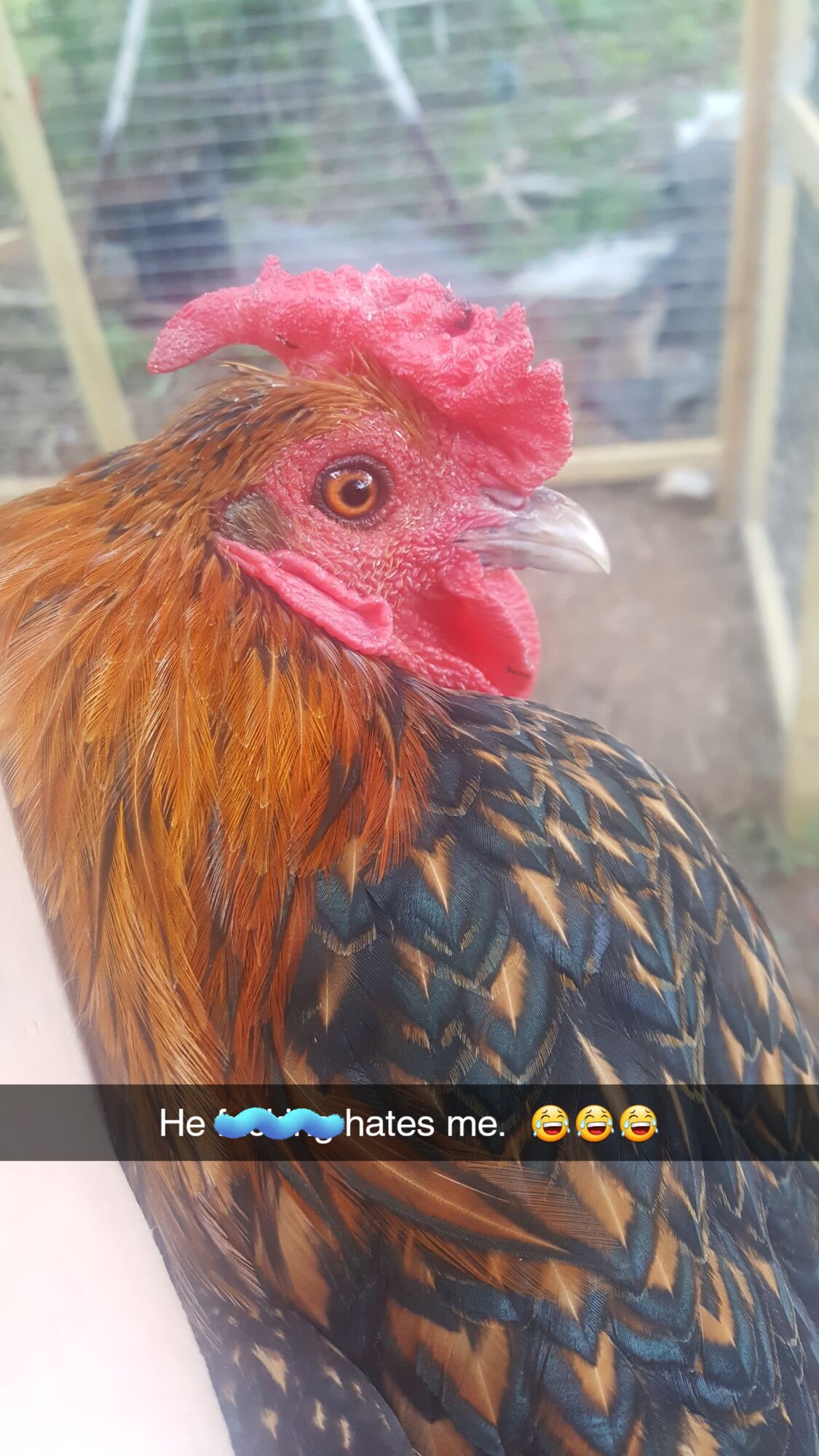 Name for a bantam rooster?

I nead some name's
2