When will my chickens start roosting?

Right now the heater probably isn't hurting anything but it might make it harder for them to adjust to the cold outside once the temperatures start dropping.

If you really want them roosting right now, I agree with the advice to wait until it's very nearly dark, and manually place them on the roost. If you have other, older birds, make sure to place the little ones well away from the adults. Most chicks will get the hint after a few nights.

Once you start putting them up there I'm sure they'll get the hint. Not really an issue I've dealt with. All of my babies want to roost high even in the brooder. 5 or 6 little ones all fighting over the top of the waterer lol.

I placed them on the roost last night and every one of them stayed all night until I opened the door to the run this morning. Woooohoooo

The amount of poop under the light Brahma(Lou Anne) was quite impressive. I had read that the majority of the daily solid metabolic waste is expelled while sleeping but damn! 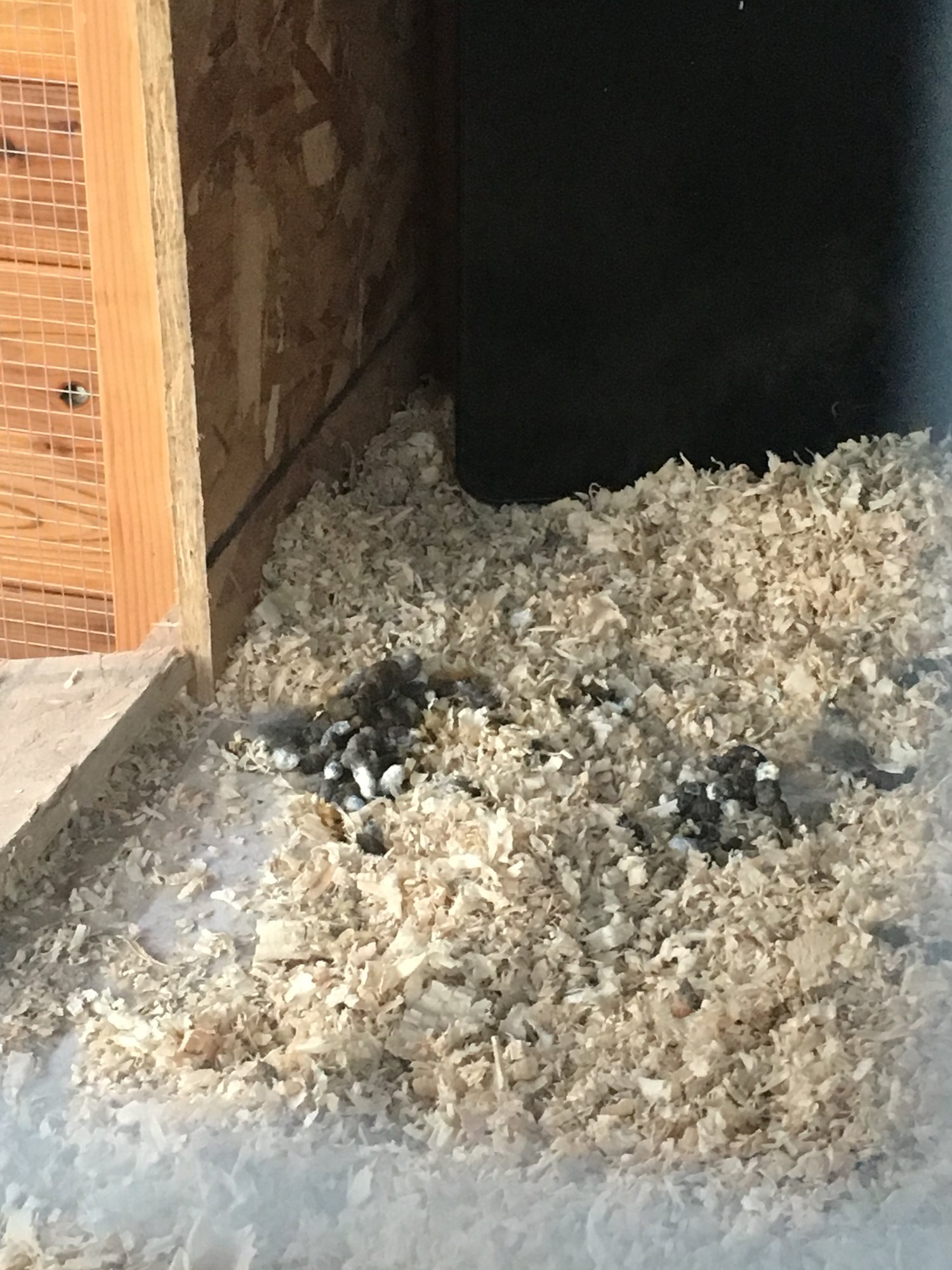 Having an alternative roost bar, lower than that of the senior hens if there are any I found makes a difference.

BrandonVercnocke said:
The amount of poop under the light Brahma(Lou Anne) was quite impressive. I had read that the majority of the daily solid metabolic waste is expelled while sleeping but damn! View attachment 1543506
Click to expand...

I also live in Western Washington (near Lynden). I let the chicks determine when they were ready to go into the big coop and when they used the roost. Had the big coop and small coop. Didn't take long (a few weeks, less than a month). Once they did that I shut the small coop door.
I have a radiant heater, just in case there is a bad cold snap. Especially with that cold NorEastern. Have it on a plug that will only come on if it gets 35 or lower and shuts off at 45. I also put a wireless sensor in the coop so I can see the temp & humidity levels. Of course the heated waterer. Never a bad idea to be prepared for the worst.

I had this same issue. Mine have only just started last night and they are about 6 weeks old. I just kept going out to the coop and showing them what to do and encouraging them to go up the ramp to roost. It took time and was annoying some nights but it was all worth it to see them roosting on there own.

I will add the bit of info that these are my first chickens, all 5 are the same age and there are no older chickens to learn from

BrandonVercnocke said:
My flock is about two months give or take. They are outside in the big girl coop and have been for a few weeks now. They have a roost that I have seen them on during the day, hoping on hanging out for a short time then hoping down.

But.... every night I go out to make sure they are in the coop,as I leave the door open to the run, and without fail they are huddled up on the floor somewhere.

I just went out to check like usual, huddled on the floor. Away from the heater.

Last year I added a broody hen with the chicks to the main cage. The chicks were about two months then. It took them another month or more to get around to sleeping on the bars. I did not entice them to do so. They would go up there in the mornings but run around the rest of the day. Latter when the hen joined the other two hens, the babies continued to sleep in the next boxes. At different times they would make the change to the bars. Some I would take over there and place them on at night. It finally came down to one RIR too who would insist staying int he nest box. He quickly learned when I came in the cage at night I was coming for him; so he would run out of the next box before I got there. He eventually went to the sleeping bars on his own. But also, some of the other chicks would return to the next boxes to sleep, including sleeping on top of the nest boxes. But by the time they began to crow, they were sleeping in the correct place on their own.

I am now on a flock rebuilding, with three adult hens, all my other chickens are six months old or younger. Most are still sleeping in the next boxes. Only three of the hens, one being the six month old, are sleeping on the bars. One hen is caring for some chicks in her own cage. Some of the three month old chicks have gone to the sleeping bars a few times for sleeping. I've also put them up there at night. The sleeping area is quite, however, the three hens who sleep there try to get the chicks to leave, even when I put them there. I find it best to wait until it is dark outside. The chicks are easy to pick up and place on the bars. The three hens don't get disturbed too much to force the chicks to leave.

It is a process if you want to do the job yourself. But you do so a few times then they know where to sleep. You can also just let them decide on their own.
You must log in or register to reply here.
Share:
Reddit Pinterest Tumblr WhatsApp Email Link