Anyone tried Samantha Burns' Hoop Coop (Run Amuk Acres in New Portland ME) or something similar for a winter coop in a cold place?

I am raising my first batch of chicks and am considering building this hoop coop to tide us over to Spring when I plan to build a wheeled coop something like Justin Rhodes' or Eliot Coleman's versions of "chicksaw" mobile coops. Has anyone tried this or something similar of it for a cold and windy winter? I have 13 3-week old mixed flock of baby hens who will be employed starting in the Spring to improve my soil where I am putting in my garden and, perhaps, also in the hayfield.

Mods I am considering: Since she has more birds I may need to think about whether there are enough birds to keep each other warm in this structure. I will use 1/2 hardware cloth instead of chicken wire and do something with the base and maybe 1x2 or 1x1 wire mesh to protect them from digging creatures. I will use the future mobile coop with Premier Electric Fence with a solar charger.

Later I need truly mobile (wheeled for frequent moving) but now I need low hassle for me as there are a dozen dozen complicating things in my life and wee birds to see to. I figure I can re-use the hoop coop in my garden and while buying myself time to daydream about the particulars of my truly mobile coop-to-be.

I am in Northern Vermont directly West of Run Amuk and think maybe we have similarly cold and windy winters. I plan to set the temporary hoop coop up in the barnyard near my house for the winter to make daily care easier during the cold months- especially the watering as our waterline to the outbuildings needs repair that we won't get to this Fall or possibly for quite some time. The farmer says she will move hers with her Suburu when the time comes and I have sufficient towing power to move whatever a Suburu can.

I would think up north to see how well the snow slides off. Maybe looking at tarps that would be slicker than other or a bit of silicon spray on top from time to time.

When I was a kid our neighbor got silicone shingles, which have been discontinued due to other problems. Snow couldn't stay on that roof.

The birds should fine if they can get out of the wind. A quick search and I found her hoop coop listed a temporary coop. One built with PVC pipe and plastic drop cloth. Snow will slide off that plastic, but it will probably degrade every year. PVC won;t last in the cold either.

You can use here plastic drop cloth idea to keep the birds warm, but I would go for a more substantial structure design. Cattle panel arch or bent 3/4" conduit supports. Make sure you clean all the sharp edges before trying to hang plastic and have repair tape like Tyvek tape.

I have cattle panel hoop coops covered in clearish tarps. -25 f.. I do have roos with frostbite combs
I have read about the pvc ones snapping at the joints the next year in the type you linked to

@Blooie wrote an article about hoop coops. She lives in Wyoming so extreme winter!

Thank you for the tag, @Sequel. Yep, I have a hoop, and we love it! Mine is just the run portion, but with a little creativity one end of it would make a dandy coop/run setup. We avoided bracing totally except for the end with the people door, where we needed to frame the door in. We’ve found that in our extreme Wyoming winds, the more bracing a hoop has the more it fights the winds because it’s so stiff. Ours flexes with the weather, so despite many respected folks who swear by bracing, we think we did the right thing. We have never had to adjust, repair, or modify ours due to winds, (often 40-60 mph with an officially recorded gust of 90 one January day), or snow loads.

This is our setup in winter, mostly covered with clear, mesh reinforced tarp, ala greenhouse. The south side is a separate piece so on sunny days we roll it up to allow maximum ventilation and some sunshine in. There is also a section above the people door on the north side that remains open all winter, again for ventilation: 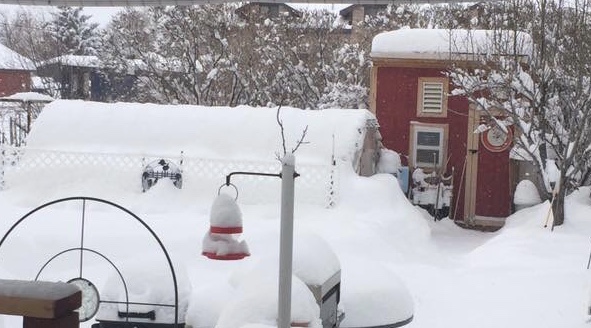 And in summer, where we use simple landscape fabric for shade. We use the stuff that’s black on one side and brown on the other, with the gabillion little pores in it rather than the fiber-type. It’s stronger and air circulates much better through it. We have each section on a pre-drilled metal lathe so we can roll each section up and down like a window shade. In this shot the middle section is rolled partway up: 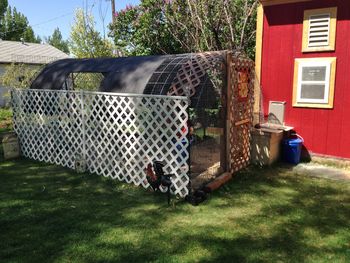 More information can be found on my Coop Page by clicking the link under my fabulously glamorous avatar.

The hoop build starts about halfway down. Yes, there’s a lot of information, and yes, there are a lot of photos. But I’m a very visual learner, so I tend to post that way too.

Now I want to build one!
C

Blooie, I <3 your coop and your detailed notes. I have to read it a few more times and it is perfect for teaching me stuff. I am a total noob.

Thanks Sequel for sending me to Blooie!

Molphet yours is beautiful! Are the cattle panels self supporting? I will keep looking at it. I would hate for those joints to snap.

Archery - great ideas! the silcone spray is intriguing. RunAmok brushes off with a push broom, I recall. I really like the cattle panel idea. I am not sure I am strong enough to bend metal *yet* tho I saw there is a tool for it somwhere. Tyvek tape is going on the list!

CRChicken said:
Blooie, I <3 your coop and your detailed notes. I have to read it a few more times and it is perfect for teaching me stuff. I am a total noob.

Thanks Sequel for sending me to Blooie!

Molphet yours is beautiful! Are the cattle panels self supporting? I will keep looking at it. I would hate for those joints to snap.

Archery - great ideas! the silcone spray is intriguing. RunAmok brushes off with a push broom, I recall. I really like the cattle panel idea. I am not sure I am strong enough to bend metal *yet* tho I saw there is a tool for it somwhere. Tyvek tape is going on the list!
Click to expand...

Yes the cp is supported only at the ends for the 8x8. The 8x24 has a support in the middle and a door to divide it in two,if needed.
No issues with snow. So far less than a ft has built up before it slides off

Help me with my coop layout, please!