Hello all. We bought a young mixed breed bantam hen off a lady keeping her in her backyard, who could no longer keep her. When we met little Chickpea I was so overwhelmed with her cuteness that i totally forgot to do any of my normal checks on her. The lady also had a dog, and other birds, so it didnt occur to me she might be selling a sick bird. 15 minutes later we were at home and I noticed her beak gaping. It was a hot day, so I didnt think too much of it. Another half hour after that one of my human children laughed that she made a funny noise. After listening myself to the rattling in her throat as she breathed i jumped onto this site and found out about natural bronciodialators. The next day a started her on one which was a boiled mixture of licorice root, lavender, chamomile, marshmallow root, nettle and peppermint. 24hrs after starting the natural bronciodialator mixture she had a poop that had some of the biggest worms ive ever seen, aswell as some little hair like worms. After seeing this i did a thorough all over check of little Chickpea and found 2 types of lice/mites and a weird toe abnormality causing the outermost toe on each foot to curl up instead of down which was hidden by her leg feathers (she also seems very light, shes just an all feather ball.) So i stopped the natural bronchiodialator and started her the next day on vetsense kilverm poultry wormer and also sprayed her and the coop with avitrol bird mite and lice spray. With this first round of kilverm i erred on the lesser side of the dose recommendations. I contacted the previous owner to let her know and offered to provide her with some bronchiodialator mixture, wormer, mite spray etc, i had far too much for 1 chooky, and i didnt want her others to be suffering unneccassarily. I also took the opportunity to ask about Chickpeas behaviour leading up til us getting her. The lady was adimant that Chickpea had never been sick before we bought her, and that she regularly worms and treats for mites/lice in all her animals. After that we went back on the natural bronchiodialator, some time in that following week i also saw what i thought was blood in her poop. I came back to this site and found the poop chart that told me what i was seeing was shedding of the lining of her intestines, which is ok once in a while. I was also seeing strange little white balls in her poop, about 1mm each in size. 2 weeks later i retreated her with the vetsense kilverm poultry wormer. At this point the gurgling breathing is still happening constantly. Shes not acting sick in any other way though, shes happily chasing us around the yard, scratching in the grass, having dust baths. Next treatment i tried was vetafarm coccivet (for treating coccidiosis) my local pet supplies guy was absolutely positive this was it, even though she had plenty of energy. Half way through her week long treatment she seemed to get better for 2 days, then she accidently spent 2 minutes in the rain in the day before i brought her in and dried her, and then she seemed to get worse again.
List of active ingredients shes been treated with internally: Levamisole, Amprolium, Ethopabate.
So after that very long spiel - my question is - what next?
B

Other information i can think of - She was 7 months old when we got her and not yet laying. She goes from her normal face colour to bright red often, normally in response to something scaring her, exciting food or hubby walking past etc. Her vent is fine, nothing wrong there. When we first got her and she drank water we could hear it in her throat, as if it was trickling around something stuck in her throat. This made me think of gape worm, but that should have cleared up with worming her shouldnt it? Going back over the writing on the wormer it specifies large roundworms, caecal worm, hair worm.
Also, since that initial scare with what i thought was blood in her poop, which turned out to be shed intestinal lining it has happened several times since. This worries me because i feel like if i dont get to the bottom of the problem really soon she may have difficulty absorbing nutrients.
She only weighs 450g, the same as 6.5 large eggs.
The lady never specified what breeds were in her, but my guess is silky + lavendar pekin + golden laced partridge wyandotte.
B 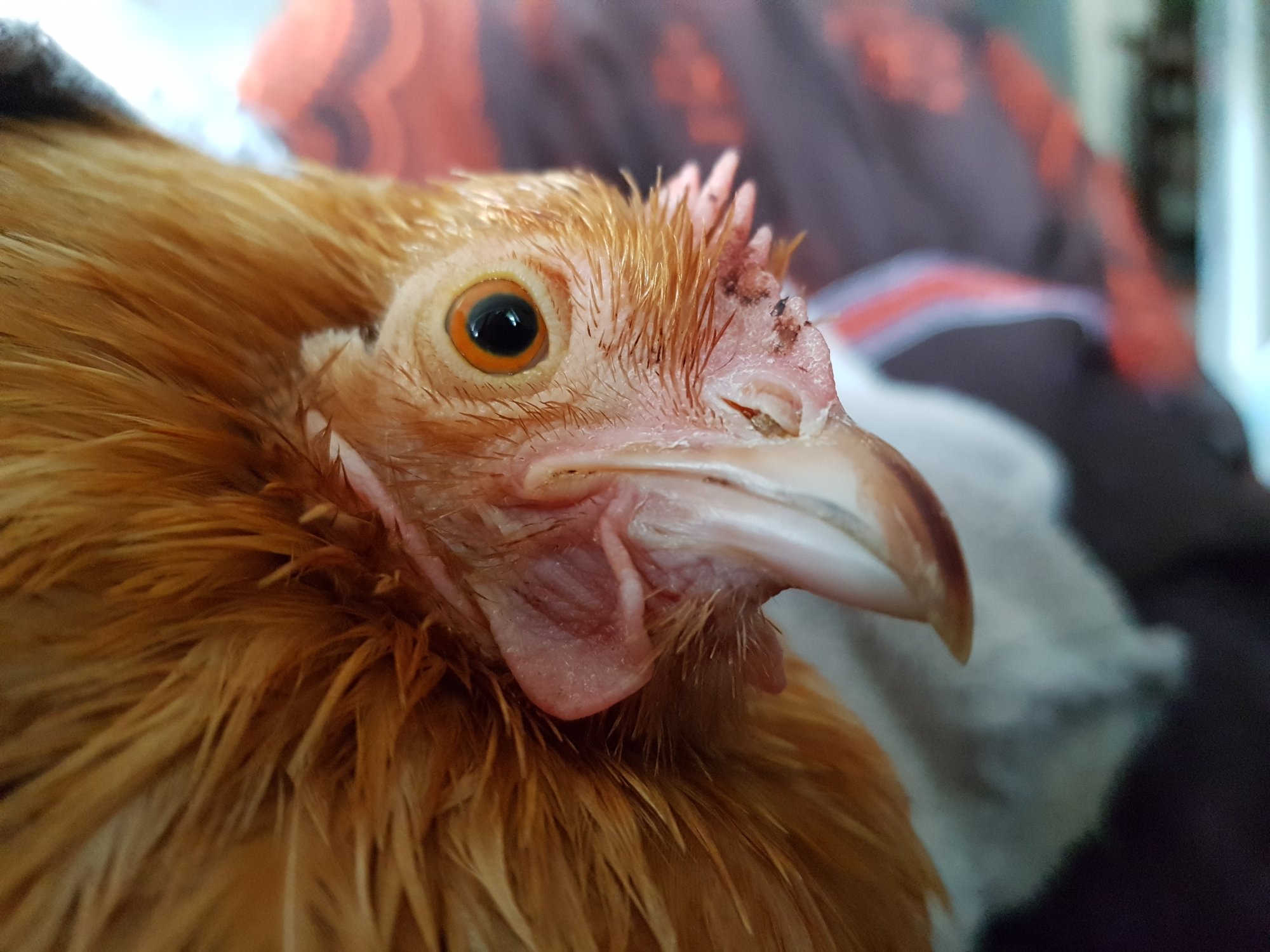 this is her normal face colour - is it considered pale?
B

Here is a video of her breathing
B

Today we bought some "Vetafarm Triple C. Antibiotic for ornamental birds" Active ingredient Chlotetracycline Hydrochloride. Duration of treatment 5-7 days. Im hopeful it will help, but in the case it doesnt I would really welcome suggestions.