SE, I'm in about the same spot you are. Have ten hens; only one egg in the past 18 days! They were all hatched in the spring of '07. No regulations on the number of chickens I can have, but I do have very limited space. So, if this isn't just a temporary thing because they are all molting right now, I'll be buying eggs and just feeding the chickens for the fun of it! And my rotten lil roo keeps forgetting that I'm in charge in the run. Have to show him at least once a week. But I can't rehome them because I don't want them to be somebody's dinner. SIGH!

Yeah molting will make them hold off on the laying but mine aren't molting, just old ladies! I can't have a roo in the neighborhood either so no chance of babies plus that would make my numbers off and I dont want any visits by the county cops. I dont know if I could even part with them but I might start thinking about looking for a friend with a big farm that would let them live without fear of being supper...I guess this is something people should think about on the front end, I sure didnt and now I wonder if I would have gotten them at all, not sure but probably not considering what feed and their coop cost...on a more dreary note, I have to get to work today after a nice long weekend...yuck!! Have a good one ya'll

(thanks Jen, you have such a good heart

Dr. appointment today... so I've got to stay away from the chicken coop, dont want to get locked in again

No really I got the walkie talkie on my hip! I think I have a broody hen, shes been sitting in the same nest box on a golf ball since yesterday (about 3ish), she was still sitting there last night when I went to check on them when they were going in for the night to roost and shes still there this morning... so I took the golf ball away and put an egg under her, if shes still there later on I'm going to add more eggs

I really hope she is broody

I want to see some baby chickies in the yard.

Oh and.... when I was camping this weekend, one of my cousins seen me crocheting and said that they have a huge tub of yarn to give me... yay!

Quote:
Sorry to hear about all these hens that aren't laying. I know they won't lay when they're molting but I always thought they laid longer than that. I remember an old Dominecker I had in NC that I had for years and she really looked her age and was crippled up in her feet but she continued to lay double yokers it seemed like forever. Maybe a change in diet or some kind of tonic could get them laying again.

baustin - I cant wait to get my hands on that tub... going to feel like a kid in a candy store

No news from the dr. checked me for diabetes - nope, checked my cholesterol - great, checked my thyroid - going to call if theres a problem. Guess if I feel weird again when I'm eating eggs, I'll do an allergy test... I've ate 2 eggs since on different days and everythings been fine.

I have a broody BO hen

shes been sitting since 3ish yesterday... I put 10 eggs under her today! 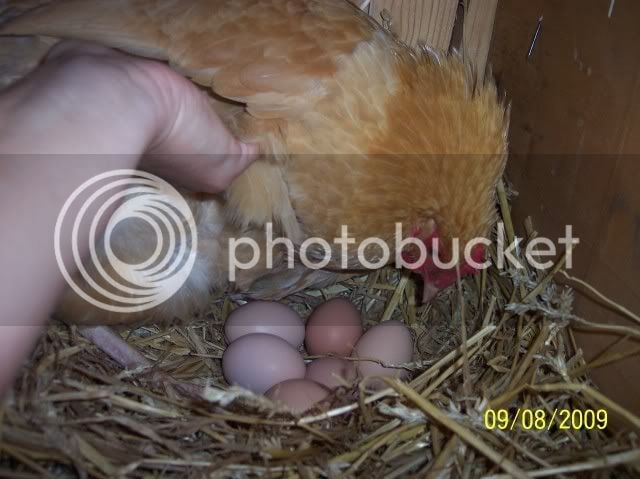 Jen my BO hen was my best sitter this year. I would give her a few days past the 21 day mark but since she is a hen and not a bator. she might do like my hen did and leave the nest after the first chick hatches. It wouldn't be a bad idea to move her to a cage where she can't leave and others can't bother her. Also when the chicks hatch they can't fall out of the nest or get lost any other way. I learned this from bad experience. Lost a few cuz I didn't know any different.
Glad to hear everything was good at the Dr. so far anyway.

You have to see this. A lady wanted me to make this and I thought it was adorable.
https://www.backyardchickens.com/forum/viewtopic.php?id=240888

Congrats on the broody Jen. It is so fun. I've had chicks all summer. It's contagious in the coop I think too.

Had a busy holiday. Didn't do anything special. Just worked on things I wanted to do and some things I didn't.

Like clean the garage, but it looks so good it makes me happy.

I love that saddle.

I've been letting my 'older' chicks free range during the day. They've been really good about staying in the back yard and going up at night. Well yesterday my roo decided to venture out and ended up in the middle of the road. A car went by him but saw him and got way over and slowed down. My DD went out in the road and picked him up and took him back down to the coop. He was frozen like it scared him to death. Poor guy! But this morning I let them back out and they are so far staying in the back.

I am finally back on BYC,
it has been alot of viruses with people and computers around here. Noah and I both had a bug.

Then a couple of weeks ago at work I got a call at the office that my DH wanted the ambulance called to the cafe he was at. Him being an EMT I figured someone was ill. I paged the amb out and then Chief Deputy asked if I paged it for him? I said I didn't think so, but I called back to make sure. And Yes it was for him!!!

Scared me, I told them it was for him and I was on my way over there. We spent that day at the hospital. It ended up not being his heart, Thank goodness at first it sure seemed like it, and they were doing all the tests for heart problems. Boy that's a lot of tests...

We have had some good folks by us and praying at that time. Now Dh is determined to eat healthier and take better care of himself.

This gave him a sense of mortality and I sure have been appreciating still having him around.

He followed up with a check up at our regular Dr and he has a treadmill stress test scheduled for tomorrow, just to get a base line reading for his file. It turns out he had a sever spasm of the esophagus, which as it turns out does mimic a heart attack. So answers why he and we thought he was having one and they ran so many tests. wow that was a shake up...

I did some reading to do some catching up, I am going to do my best to keep up and keep in touch with ya all better to.

I did get my SS ,, Thanks Scoot. I like country, Italian rustic, old world type stuff. Or any gardening type stuff... simple everyday things.. little stuff makes me happy

Well gotta get Noah to bed, thanks for thinking of me gang, sorry I didn't think to call chix and have her pass along my situation before.

Be checking in, in the morning

How to crochet a bobble