So, after reading SO many posts since even thinking about getting chicks... I am worried about hawks -as we DO have them here. One got one of my daughter's 4H turkey poults last year (we had no netting then).
SOOO, my question is... is this netting enough to keep hawks at bay?
It is zip tied to the 2"X4" wire mesh that is around the pen/coop and is attached to the coop eves.
I'm just worried now that a hawk could dive into it, rip it, get a chick and take off.
Will they see it since they have such good eyesight?
Any thoughts to make more secure??
Maybe ribbon on the netting for a visual??
Other thoughts??
Thank you for any ideas to improve on this.
(sorry if the pics are a tad wonky, I used the panoramic feature to give full view of pen).

Well, to get the ball rolling, here is my $.02. Seems that a hawk would be reluctant to dive into the net and they DO have superior eye sight. IF they did knock a hole in the net are they smart enough to find the hole again after an attack AND carry off a victim? I would vote that you are probably ok. One way or the other, good luck.

If a hawk gets into that it will not get back out. If they're very determined, a hawk might break through the netting. They will see it, and know it's there, and they will be reluctant to dive into it. Ribbons would probably help. I would also consider hanging some old CDs or mirrors around to bounce light, as hawks HATE that. Over-all it's UNLIKELY you will have any problems.

However, depending on conditions they MAY try anyhow, especially if they are young and have a taste for chickens already.

One year we raised some CXs and a young hawk got to one of them while it was still small (Maybe 3lbs). Despite securing the chickens better thereafter the hawk kept coming back, again and again, even divebombing the chicken tractor while I was out with it. Eventually we processed the CXs but the hawk was still around. Later in the season we had a few older CXs we got for free from someone who didn't want them and we set them up in a tractor, but the door wasn't super secure, and well the hawk saw the same tasty chickens from earlier in the year, and... 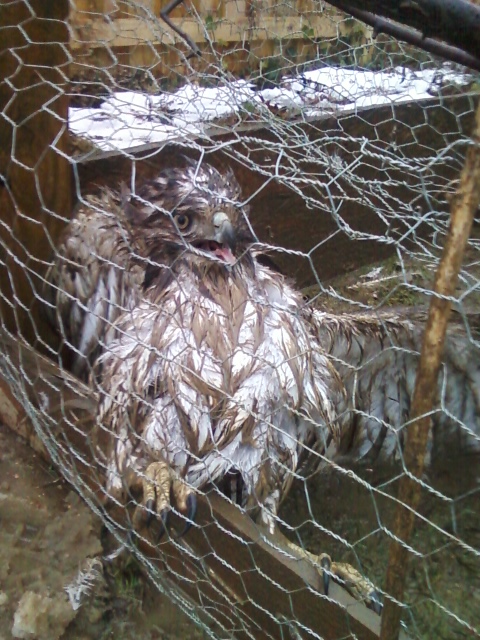 Well, this is what I woke up to that morning. It punched IN the door on the top, found out the chickens were WAY too big for it (they were 14lb cornish crosses, not the 2-3lb ones it got to earlier in the year) and proceeded to be unable to get out again. It was jumping from wall to wall, desperately trying to escape, while the CXs were screaming and trampling it in terror. Ultimately everyone escaped from this mess battered but very much alive, but I had to carry a hawk out of my yard in my jammies that morning.

This is a pretty rare occurrence, it happened to me once years ago and hasn't happened since and we have hawks overhead nearly year round. But it's still possible that a VERY determined hawk will break through anything less than a perfect defense.

So maybe consider adding some of those ribbons and CDs after all. It's only one day of work, it's cheap, and could prevent a lot of chaos for everyone.

As another note, it looks like you have a big chicken yard in a remote location.

Consider adding some cover for the chickens, and they will not only be less visible and less of a target but they will also make good use of it for fun. An easy example might be a pallet on four cinder blocks. Tunnels (hoops or a frames) are easy to make out of wire, 2x4s or plywood, etc. Even a few heavy branches placed across notches cut in a couple of sturdy logs to make a tunnel or box could help.

A rooster might also help. I find that mine keeps his eyes on the skies. I haven't lost birds to hawks since he took over the flock (knock on wood). If he sees a hawk they all just duck for cover.

But that, too, requires cover for them to duck under.

I tie old cds SHINY SIDE UP to the top of my run about every 4-5 feet at varying angles as a secondary deterrent to make sure 1.) the BOPs know the netting is there and 2.) if they think they're going to try it they get the sun shot back in their face like a mirror reflecting the sun at them.

I am thinking along the same lines as ChocolateMouse.

The cover you add will also give shaded areas for lounging.
It will be a much richer environment.

Saw horses with plywood screwed down on top is enjoyed by my birds regularly.

Chickens are jungle animals, and want shrubs and trees, or whatever you can work up that fits in that run. Shade, cover, and entertainment all needed here. Unless you have a very few birds, that grass will be torn up and gone anyway. Then plant mixed vegetation, shrubs, herbs, catmint, whatever.
Mary

OMGoodness, the feedback, thank you folks for taking the time! And my goodness, the hawk that didn't quit story... sighhh, dont want that here, for sure!
Well, I will now go ahead and do as I had wondered... that is, make the netting more visible. AND, thank you for the ideas of adding to their run. I do have some more plants in there (might be able to see the start of some in one of the pics), but will add a physical structure as well for more shade. They will have some from the coop (as the run is on the north), but more is better. Thank you folks for taking the time and giving your thoughts. It is truly appreciated.

My Quail pen is almost ready and a question.
2

Questions regarding my first Hatched Ducklings!