We just moved our 3 week old Easter Eggers (2 of them) out of our house to the garage 2 days ago. Unfortunately my 4 year old didn't put the lid on all the way after watering them last night and they got out and it looks like something got one of them. We found the other one yelling her head off trying to find her sister at about 5 this morning. What do we do now that she is all alone? We just moved our three 10 week old's into our integration area (fenced off from the rest of the flock but able to look at them) over the weekend. Would it be best to try and put the baby in with the juveniles so she's not all alone? I'm afraid they would attack her though. Should we fence off a smaller area in their pen so even if she's alone she can see everyone? I feel so bad for her, someone please help!

they likely will attack her.
Try to find a chick you can buy in your area
you can also try adding a mirror in the brooder in the short term.

If you can put her in so she can see and hear the others for now, that would help her feel less lonely (if the temperatures aren't too bad and you can hook up her light). But I agree, if you can get another chick or two that would probably be best, call around and see if you can find ones a week old or more.

I spent the day calling around our feed stores and everybody is done for the season. I've got an ad on our facebook buy and sell page (small town, no craigslist to speak of) so maybe I'll get a hit there. In the meantime I've put a mirror in her pen and we're spending lots of time with her.

Maybe you could post a notice at a feed store, or ask them if they could contact one of the people that gets a lot of chicks. Someone should be willing to give one up for you. But giving her lots of attention is great, even jut having her in the room with you--that will be one tame chicken!

Your three-week old chick will be content as long as she's in proximity to the ten-week olds. I wouldn't try too hard to find new chicks. It's not necessary.

However, it's a very real issue with the age and size differences. The ten-week olds will try to make life miserable for the small one. This doesn't need to be an unsolvable problem, though.

I would rig a safe pen for the three-week old in the center of the run as long as it's secure and protected from weather. Create access in and out of this enclosure that only the smaller one can fit through. It can be vertical openings (more than one for safety) or you can make a horizontal gap along the bottom for the chick to scoot under.

The chick will require some heat at night for the next two weeks, maybe more if you live in a cooler clime. I would rig a heating pad cave for it to sleep in. Food and water inside the enclosure is essential as the chick is likely to be driven away from these essentials otherwise.

With this setup, you will see the small chick quickly adapt, and it will be very proficient at evading any aggression. Eventually, it will assimilate into the older group, probably within just a few short weeks.

I had someone message me on the facebook group and may be getting a 2 week old chick today. If it falls through I will definitely do what you advised with the chick run. Should I do anything special to introduce the two chicks or will they be fine to just put in together?

I would just put the two chicks together. Don't be alarmed and think the bigger chick is going to kill the new one when it walks over to it and gives it a sound peck on the head. That's SOP in chick world when a chick meets a new one.

You will still face integrating two smaller chicks with nearly full grown chicks. I would follow the plan I presented, except now you will have two chicks. A heating pad can fulfill heat requirements for both chicks as the older one may elect to use the top while the new one will need to use the inside.

If you brood the two indoors, you will still face integration later. It's easier when you do it sooner while the chicks are still small enough not to present much of a threat to the larger ones.

So just wanted to give an update. I decided to try the suggestion to build a safe spot with the juveniles before adding a new chick and its been working out great. She spent the first few days in her hidey hole as they would chase her whenever she emerged, but now they mostly ignore her unless she tries to get food at the same time. The upside to all of this is that when I am outside, I bring her out and she follows me around like I'm her mother. If I sit, she immediately jumps on my lap and flies up to my shoulder - my kids (and me) are loving how tame she is becoming!

Here she is making herself at home on my lap and sleeping on my shoulder during my morning coffee. Ignore the weird look on my face, it was sunny and I was being blinded. 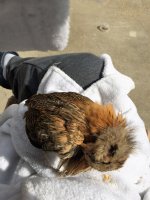 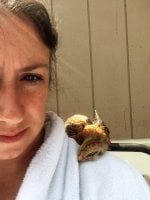 How long can a chicken be alone??

B
Trying to integrate new chicks to mother hen?!??