How to stop our hen from hopping the fence

So... a couple months ago, after we lost a hen, we got two new pullets and an older hen to introduce to our last bird. They've gotten accustomed to each other at this point, but our first hen was a little show-offy at first, jumping up onto several spots she'd never jumped onto before and more or less crowing her displeasure at the situation.

One of the things she jumped onto was our side gate, and shortly after, she realized that a whole new world of scratchable things exists in our driveway.

Since then, we've tried a whole bunch of different things to dissuade her, including adding some vertical, triangular topped posts to the gate at regular intervals to keep her from landing, putting a coiled wire on the gate, slotting in a sun visor, and hanging up pinwheels and an umbrella.

The sun visor worked, but it's not a very good long-term solution, especially once we get snow or high wind. The biggest problem, of course, is that the gate is only about 3 feet high. We've hoped that keeping her from the driveway for a few days would put it out of her mind, but every time it becomes possible again, she inevitably hops on over once or twice a day.

She's not particularly difficult to round up (she's a very friendly bird), but I'm quite concerned about loose dogs. Any thoughts? I'm not greatly inclined toward wing clipping (since they free range so much), and I don't think the gate is tall enough for that to be effective anyway.

The only way I can think of, aside from having them inside a pen, is to run an electric fence/hot wire. Most of my chickens hop the fence, but usually stay right next to the fenceline.

Can you get a taller gate maybe?

Extend the gate height with something solid like sun visor but of a more sturdy material.
Would you post a pic of gate? 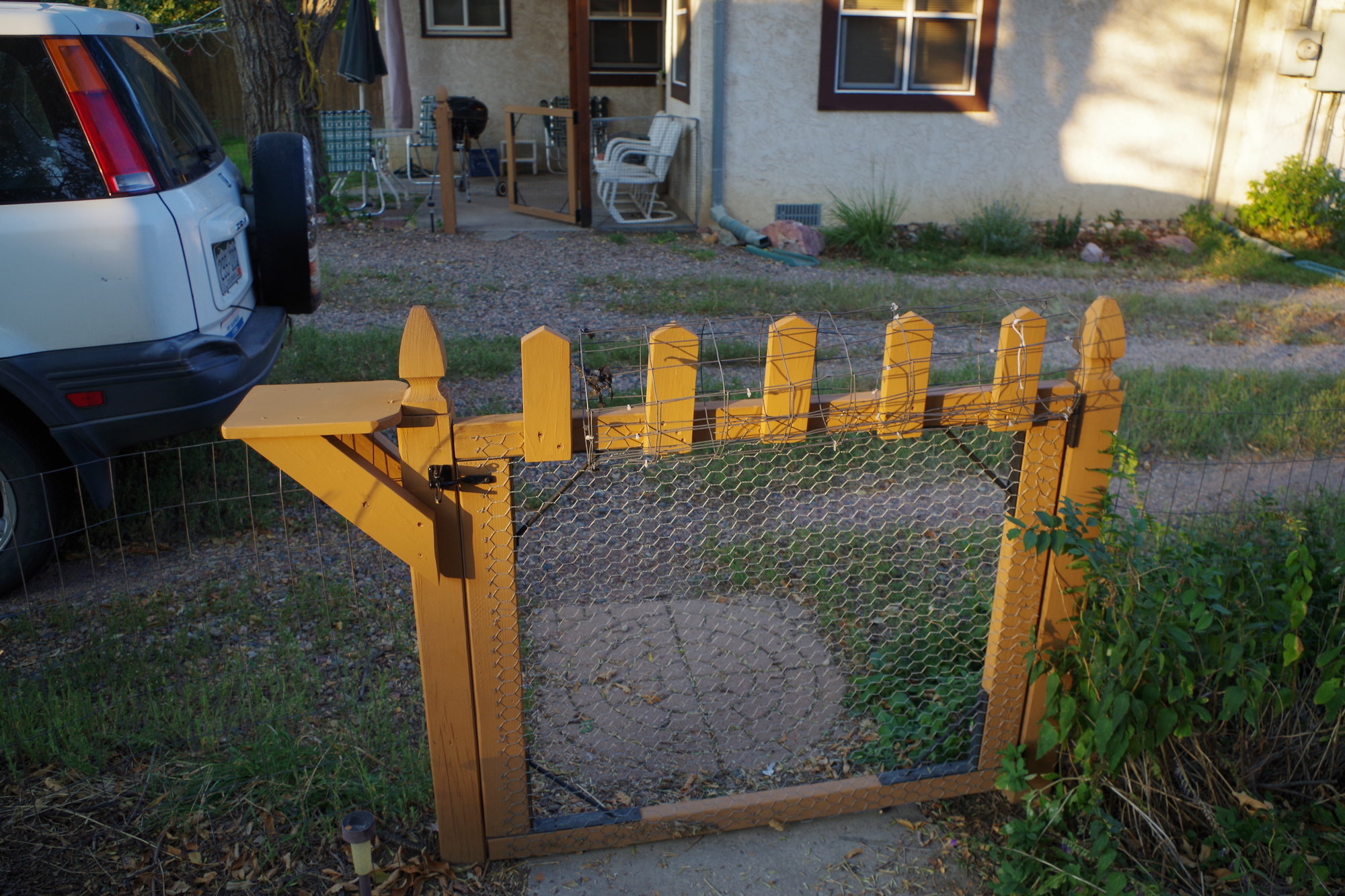 Making the gate taller is a bit impractical. Extending the top a little is kind of what we've been trying to do.

You can see the gate and the coop in this photo (the gate in question is the open one on the left)... but I'll try to get a better one (which also includes the weird modifications we've attempted) tomorrow.

EDIT: I am dumb. I DID take a photo. (Above) We've since added a bunch of pinwheels to the side shelf and the post to dissuade landings. Maybe more would help?

What is that shelf for....can you remove it?

Here's an idea, kinda rough but might work... take a piece of chicken wire a couple of feet tall and long enough to cover both the posts(blue lines). Z-fold vertically first then fold over edges to make it stiff enough to stand up(red lines). Attach it to the side it opens to(green dots).

I'ts ugly but should keep her from using gate to land on and wire addition is too floppy to land on the top edge. But really your whole fence is probably going to need to be higher to keep them in. 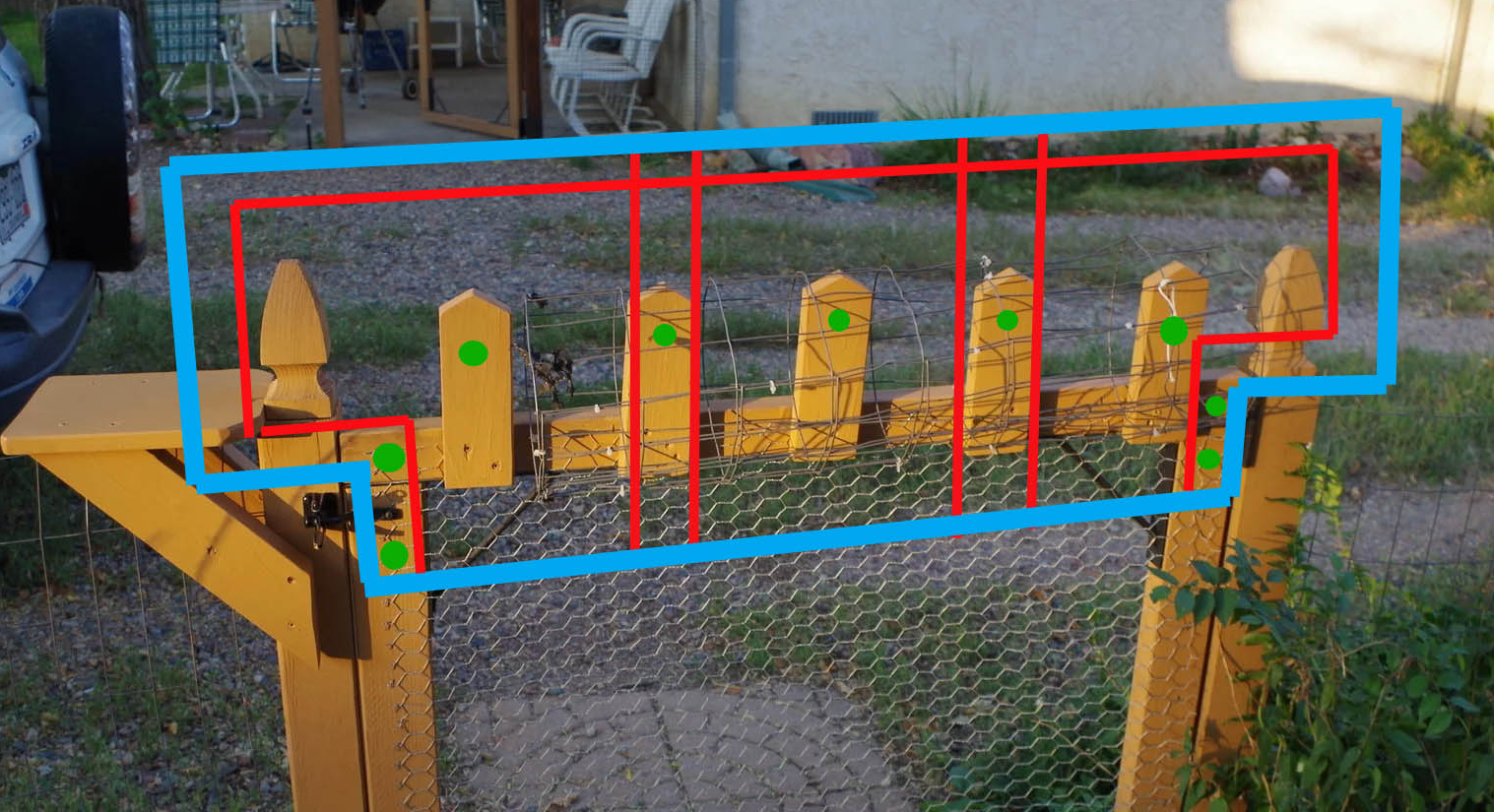 That wire idea is pretty close to an idea my brother had. Probably gonna give that a go.

I just put in the shelf, actually. It was meant for us to be able to set stuff down while we go from car to house and vice versa. It can came off, but I'd rather not. I was hoping she wouldn't want to land on it, since it's smooth and she wouldn't be able to grip on a landing. No luck on that, though, as we've seen her use it.

Swiftbow said:
I just put in the shelf, actually. It was meant for us to be able to set stuff down while we go from car to house and vice versa. It can came off, but I'd rather not.
Click to expand...

Maybe you can move the shelf down lower(12" below top of fence) and on the outer side of fence so you can still reach it but birds can't land on it. 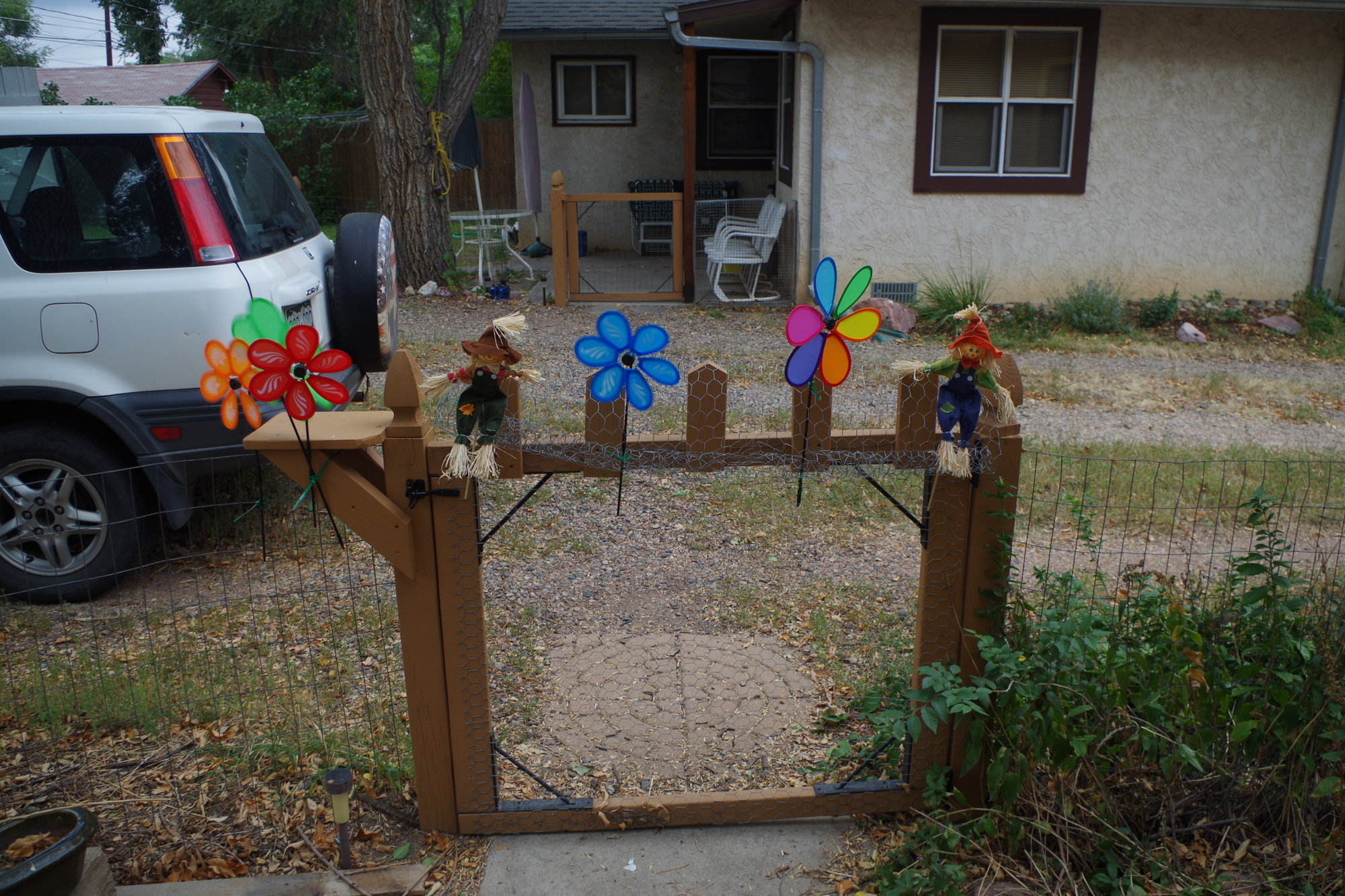 Okay, here's what we've got at the moment (will see if it works after a couple of days).
The wire on top is chicken wire, so it gives a lot with a landing.
You must log in or register to reply here.
Share:
Reddit Pinterest Tumblr WhatsApp Email Link