I have a 6 week old red of some sort...any ideas what kind or if I'll have eggs or an alarm clock?

Our school hatches chicks every year, this year I had the joy of teaching in a room with some chicks and was fortunate to have a good batch in our room. We only had 1 that had a very difficult time hatching and at lunch day 2 I helped the little chick out. When the kids went home for the year we had a "hospital" box of chicks that were in bad shape. I took that box home because my wonder chick was in there and knew with a little TLC he/she'd be ok. That wonder chick was the only one who survived and is my little "red" who needs identifying. I tried the wing sexing early on and self determined I had a roo, then I read if there is a black stripe down a RIR it's almost always a pullet, but then the feathers were really late to come in so now a roo, but now the comb is still yellow at 6 weeks so pullet, but yesterday "red" was either having a hard time swallowing an ant or going thru the motion of crowing....any educated guesses on the sex at this point would be really helpful. My kids and I really love our bird, and we have a great home set up if "red" turns out to be a roo where he'll have his own flock, but if "red" is a pullet then I'd really like to start the work on the permanent home for her. Thanks everyone!

I wanna say roo so you already have a home set up, but pullet.

It think it is a pullet

I'm happy with pullet that's what I've been hoping for, I will now start looking how/where to building her permanent home here with us! Any idea what kind of red SHE is? New Hampshire, Rhode Island, (does it matter?) or am I way off... I will also be looking for a chicken vet... thanks guys for your educated guesses!
M

redranger209 said:
I wanna say roo so you already have a home set up, but pullet.
Click to expand...

No worries, a roo has a home elsewhere, a pullet has a home here with us! We are just outside city pimits but are only on 1/2 acre so neighbors wouldnt appreciate a roo, a pullet won't be an issue here.

Birds of a Feather

Birds of a Feather

I agree that she's probably a Rhode Island Red. 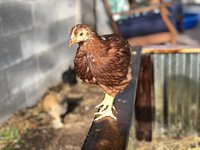