BlueBaby said:
Is there a way that you could put more out for the chicken's on Friday that would get them through those 2 Saturday's to make it easier on you?
Click to expand...

I will probably use the same basic “early boat” strategy as I do when we do the big monthly grocery shop... (DH can’t be relied on to do it all on his own, and I like planning out the food I’ll be cooking and making sure I’ve got it all stocked and at sale prices)

The day before, I do the chicken chores in the morning, open, move, feed etc... as usual. Then I do the afternoon egg collection and a second (extra) move significantly later than usual. Not quite at roosting time, but late enough that they still feel like they have “new” grass the next day. Then when I’m closing up for the night, I do a full top up as I hang the feeders, so in the morning I just open and drop the feeders. This means I can do my next morning chores for all 50+ chickens in 6 separate pens spread out over 3-4 acres in about 10-15 minutes, half asleep. It makes the town or Saturday do-able, but the Friday is twice as much work. It works for a single occasion, but isn’t really repeatable over consecutive days. If I wasn’t doing a pasture based tractor system it would be much easier

Too greasy for my tastes... reminds me of bear.
Speaking of which... we have had some visitors walking our road! I noticed this while walking back and forth shoveling drain rock today, it was fresh. I have large hands/thumbs. 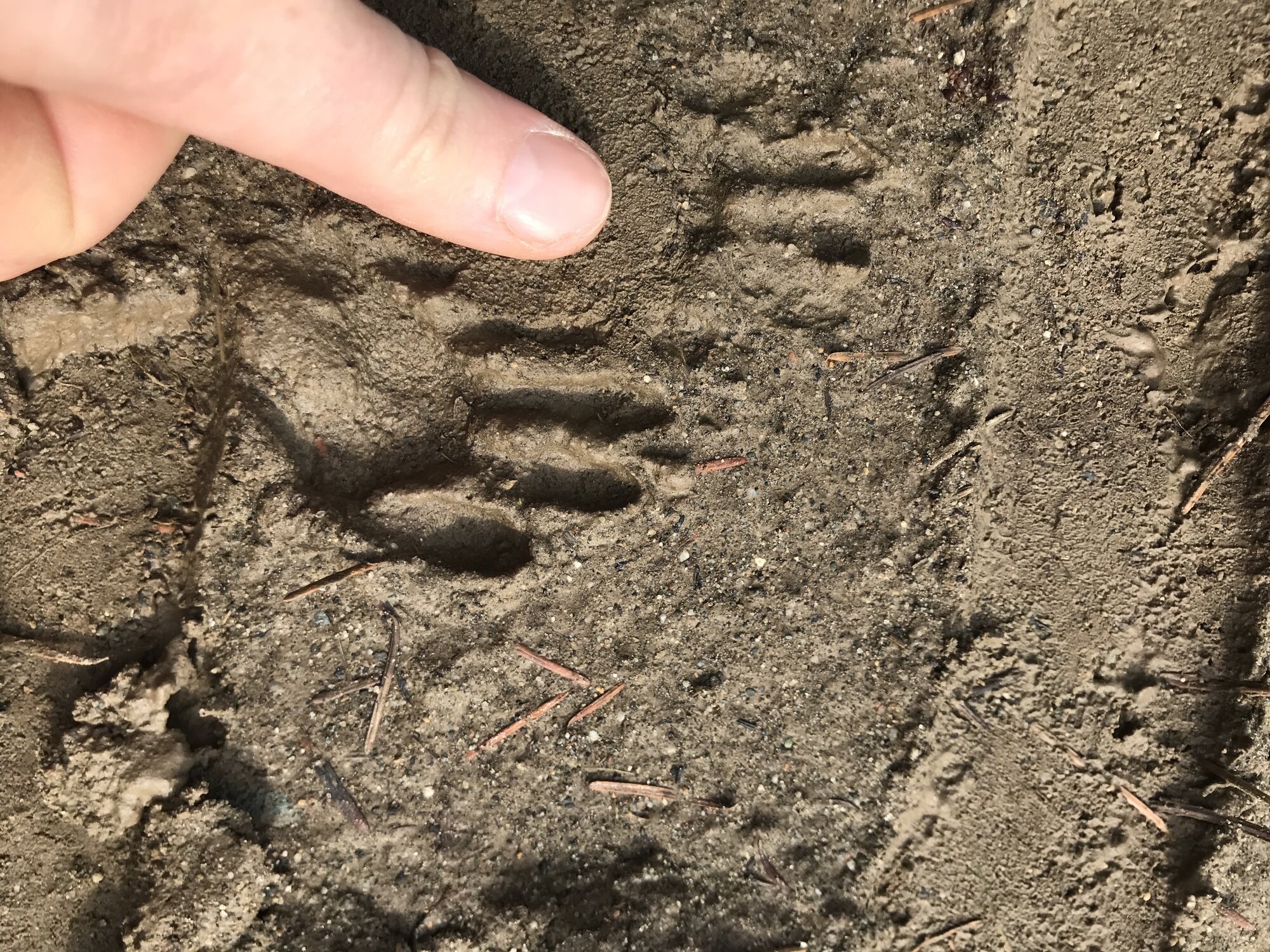 Which reminds me... house update: Tractor parking, Shovel gravel into bucket, drive from trailer to build, shovel out of bucket, repeat. Hope it stays dry and I can paint the waterproofing stuff soon. That’s pretty much it.

I'm glad you showed this. Your incubator looks very much like mine that I've been afraid to use since it is so small. Mine can hold 7 eggs. Is this the first time you have hatched with this?

BlueBaby said:
Too bad you can't come get these 3 BCM's after they hatch, I'm sure at least one of them will be a boy!

Peace without FIL at last!

Thats a plan! Kris you go over there then come over here and go home with enough eggs to get those bators slam full plus some birds

Kris5902 said:
I know that feeling... I’m budgeting, measuring feed, estimating what I’m going to need for each run of meat birds. Based on last year’s consumption and where I’m at for numbers, it’s going to be very, very tight... at least until May when the money starts coming in again. At least I bought most of my hardware cloth, fasteners, latches and such while we were still doing well. I think the start up is the hardest part, because there’s so much initial outlay for things like housing, initial breeding stock, and equipment... and extra equipment, because you don’t want to not have any backups if something fails, and nothing really coming in from it.

Hope, perseverance, and working with what you have is what I think makes the difference. Focus on what you can do with what you have. There’s always hope and the potential for success when you’re willing to put in the work and you don’t give up! Yes, I want some Bresse to work with and yes, I want more blue layers, and some barred rocks for sex link chick breeding. But what I’ve got are a bunch of great olive eggers, some good genetics, and some ok ones, and a whole ton of stubbornness!
Click to expand...

your attitude! You come on down here, i Got You! The quail breeder i

has Bresse, thats one of my all time favorite breeds, and i was working with them before the flood and before the children. Haha yes and stubornness is the only way it works here too!

So far our local strategy had mostly involved tanning... I think slippers would be better than hats, but

Chilly and damp this morning, with light showers expected overnight... sigh I need 2-3 clear days above 5 degrees Celsius to apply the goop to the foundation... this week doesn’t look too promising.
You must log in or register to reply here.
Share:
Reddit Pinterest Tumblr WhatsApp Email Link