Laying Pullet Has Tail Pointed Down. Need Ideas for How to Help Her.

My 29-week-old Favaucana (Easter Egger) pullet, Celestine, has had her tail pointing aggressively down yesterday and this morning. She started laying eggs on November 7, and all the eggs we've found have been perfect and petite, with no issues. One other of her sisters is also laying. She and her sisters were vaccinated for Marek's at hatch and raised by a friend-of-a-friend for their first 4.5 weeks, far away from our flock, so the vaccine should be properly effective for her.

Here's what we've noticed. I'd appreciate any information you all have about how to help her.

Yesterday (observed for several hours, both during supervised free range and while in the run)
This Morning (just quick checks on her so far)
The picture is Celestine this morning standing in the middle, flanked by her two Favaucana sisters with the normal upright tails. 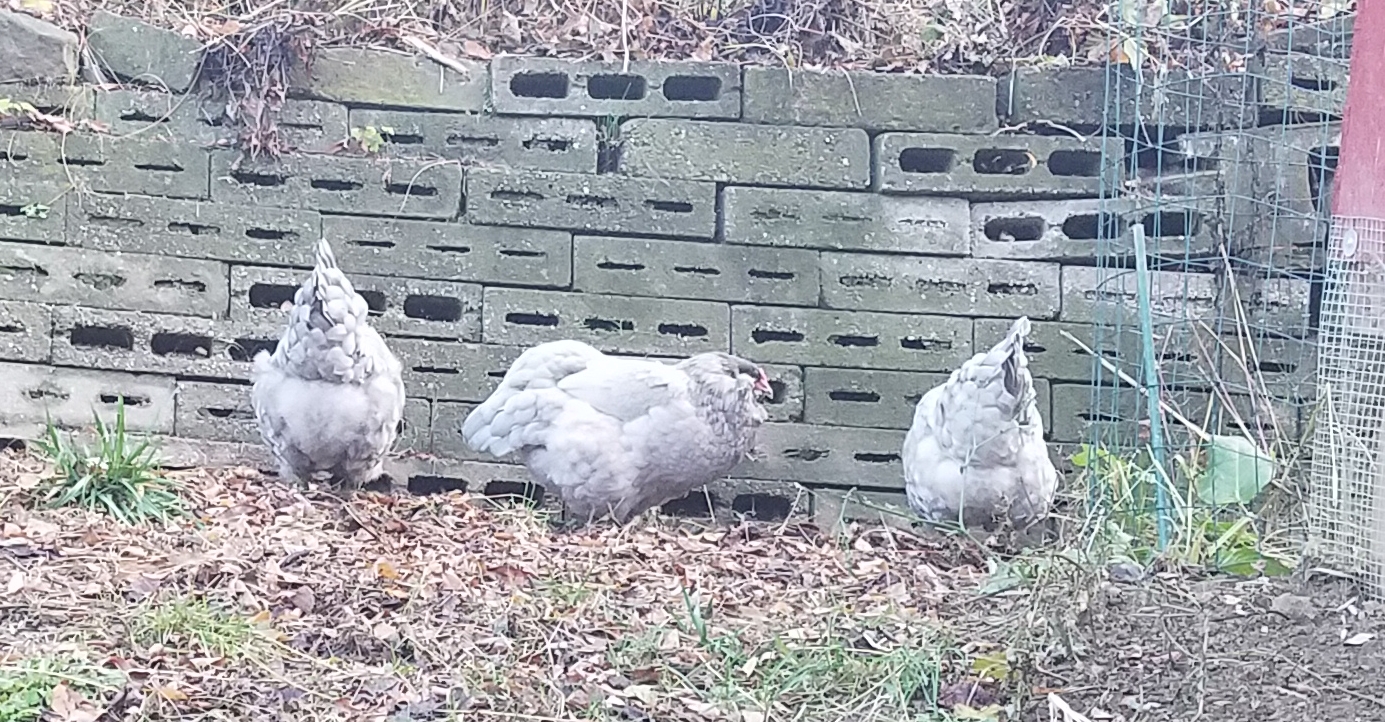 You could check for a stuck egg by inserting a clean finger into her vent 1-2 inches. If you find no egg, then continue to watch her. You could offer a half of a calcium tablet in a bit of cooked egg yolk. How often does she lay eggs?
R

Eggcessive said:
How often does she lay eggs?
Click to expand...

So far, she's been really consistent. I would guesstimate that it's five days a week that we get an egg from her. She's only been laying for two weeks and we haven't been keeping proper records.

Hopefully, she will be okay. I would not feed a lot of treats or extras, and just make sure that she is eating her layer feed and water. If she seems overweight, that can cause egg binding.
R

Eggcessive said:
Hopefully, she will be okay. I would not feed a lot of treats or extras, and just make sure that she is eating her layer feed and water. If she seems overweight, that can cause egg binding.
Click to expand...

Thank you. I hope so, too. She still has all her regular joie de vivre. We'll do an internal egg check if nothing changes by the time we're finished with work.
R

Celestine seems alright now. The solution seemed to be to treat for coccidiosis. Here's what happened.

November 22 - Celestine had her tail comically pointed down. No egg laid
November 23 - Celestine's tail was still aggressively pointed down. Observing her closely throughout the day made us notice that her same-age sister Persephone was a little bit puffed up and seemed to occasionally be falling asleep on her feet. We decided to treat for coccidiosis and gave them water dosed at 2 teaspoons of Corid per gallon for the next five days. No egg from Celestine, and Persephone isn't laying yet.
November 24 - Persephone seemed back to normal. Celestine still had her tail pointed down. No egg laid. We brought her inside and tried to give her a warm Epsom salt bath, but she wouldn't sit low enough to submerge her vent. Some of her beautiful beard has been plucked out!

November 25 - No real changes. We had a super scary hawk visit that scared everyone, but no one was hurt or attacked.
November 26 - Celestine's tail was higher. Halfway between her normal upright tail position and the abnormal down position.
November 27 - Her tail was ever so slightly higher, and she laid an egg again.
...
December 1 - Her tail is completely back to normal, and she's laying regularly again. We're following the Corid treatment for 7-14 days of 0.5 teaspoons of Corid per gallon of water b/c her 1.5-year-old molting flockmate is having abnormal poops consistent with suffering from coccidiosis, so she doesn't seem over it yet.

K
Hen tail down, no appetite, and more

Chicken with swollen but SOFT belly