Rooster not fertilising anymore, gets on but not complete job

When does a rooster start slowing down? / giving up mating?
My Silkie Roo (about 2 yr old) does sort of mate but only half does the job. He use to fertilise (I've hatched his chicks) but doesn't do it fully anymore. Half gets on top of the hens but not fully - like he can't be bothered treading and fertilising but just a second sit on top or sometimes just pecks and hen submits (squats) but he doesn't get on top at all.
Also, most of the time he eats the treats instead of giving them to the hens.
No eggs have been fertile lately.
So how do I get him to complete the job? Is something wrong with him?

I have another coop with a cockerel and pullets, their eggs are fertile.

I was thinking to switch my cockerel with roo (diff coops) but I like roos colours and cockerel probably won't give me many colour variety chicks.
I have cockerel in with pullets I don't want to breed with, just for him to not be alone I kept them. 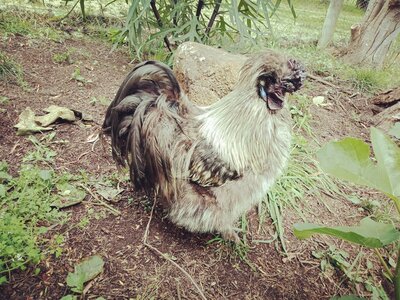 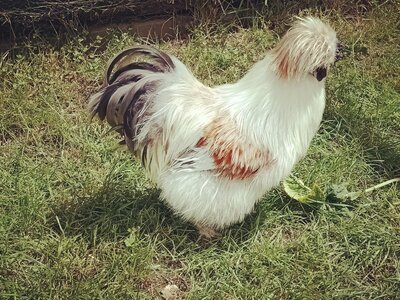 Will you kill the old roo?

Will you kill the old roo?
Click to expand...

No, I have only put 1 sweet hen to rest when she was sick, near death and nothing more I could do.
Is 2 yrs old for a roo?- so is that about when fertility drops down?
I have a coop I have pullets I don't want to breed with (red comb silkies) so I have the cockerel in with them now and could swap roo into that coop to continue to live out his life.

I believe fertility slows, but have not heard f a complete stop or a decrease in mating. Strange. Could he be ill?

Sulky Bantam said:
I believe fertility slows, but have not heard f a complete stop or a decrease in mating. Strange. Could he be ill?
Click to expand...

Possible I guess they are good at hiding sickness. Don't know what though?.. He has got stuck on his back a few times so could this be related? Maybe the old man has done his back in?

Nope, he seems fine. Nothing else abnormal.

Yep top, he is the only roo in that coop.

Well, just keep an eye on it. What do you feed him?