Stories of chicken running away?

Never thought this would happen to me but 3 days ago one of my hens ran away from home. I went looking for her and she was at the end of my street on the wall. A loud noise startled her and she jumped off the wall.
Unfortunately, on the other side of the wall is a 30 foot drop (around 9 metres) and the woods. I was panicking at this point as I couldn’t see her anywhere when I looked over the wall. Not in any trees or in the dense foliage on the ground. We went to the woods to look for her and someone we met in the woods said he came here often and pointed out a fox’s den he’d seen a few weeks ago (very close to where my hen jumped from

).
We searched for her for 2 days and gave up hope as there wasn’t much food or water in the woods and we thought we’d never find her. We have also seen many foxes and predators roaming the woods at night so thought there was no way she’d be alive.
Anyways, this morning one of my neighbours told me that last night she had seen a chicken sleeping in a tree near the other side of the wall. In the morning the chicken was under her car. Turns out it was my lost hen! She’d come home and must have been hungry and thirsty.
She has been given lots of treats and cuddles and smells of the woods. It’s a nice change as she usually smells of wet dog

She doesn’t have a scratch on her but her feet are very dirty and she’s drinking a lot of water. I never would have thought I’d have a mini Bear Grylls in my flock

I don’t know how on Earth she survived! Maybe she landed on one of the neighbouring trees when she fell. Or she landed on the ground and flew onto one of the lower branches and climbed her way up? We have a tree in our garden that she loves climbing so she has practice.
Anyways I thought I’d share this story to anyone who has lost a chicken recently, they’re incredibly smart and resourceful so don’t underestimate them! I know other birds migrate so obviously have amazing navigation skills but I never thought my chickens would! I am amazed.
Does anyone else have any stories like this? I’d love to know.

Thanks for sharing the story.

So glad she made her way home, hopefully it doesn't make her want to travel out of her boundaries again though...

Glad you got her back ok!

My story happened quite recently,I hatched 2 roo’s and 3 hens this year and kept one for breeding and had to seperate the bad rooster for the hen’s safety(Too aggressive with them)and I put him in a coop faaaaarrrrr away from them in another coop.Well that week I started having trouble keeping him in there because he is super smart for a chicken.He jumped and climbed out of the hole I had in the roof(which is now fixed.But he misjudged where his siblings were and got lost on the opposite side in my neighbors garage!My neighbors were quite amused..I toted him back,he cooed over everything in his pen when he was finally home that I thought that was the end of it and he had learned his lesson..Until a few days later when I’m feeding his siblings I hear clucking sound beside me so I look down to see that he was quite smugly doing the rival dance at me for successfully getting to his siblings..I locked him back up for his impudence.here is a pic of him right at that moment. 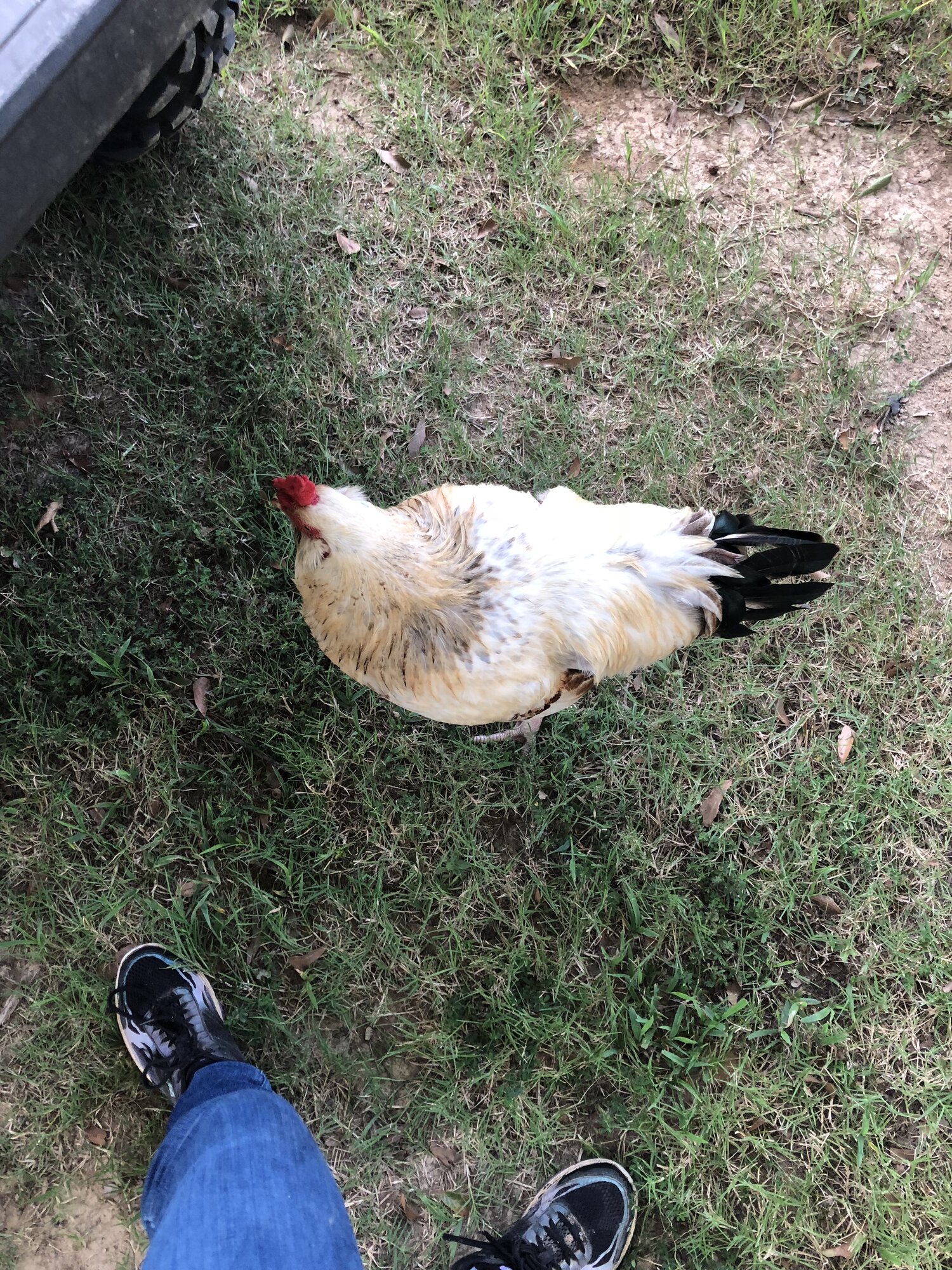 I had a barred rock a few years back that disappeared! We were so sad as we were sure something had gotten her. Then, a month later she came walking on back as if nothing happened! She had been off in the woods for a MONTH and was perfectly fine! (I wasn’t, I was dumbfounded!) this was me “how…who..wha…b…bu…but…HOW?” She lived for a long time after that happy and healthy!

I had a hen who didn't run away, but she used to sneak out of the coop and lay her unfertile eggs under a canoe. she was a BO.

No chicken problems here, but my small flock (eight) of Muscovy ducks, who I raised from tiny babies, and fed and pampered all left home this summer and went to live in a neighboring homestead. I guess the neighbors pond is bigger and they like the lay of the land better.

A couple years ago, one of my Blue Americanas randomly disappeared. Her name was Blue (we are very creative), and she was our smallest and weakest chicken. The very bottom of the pecking order. One night, she didn't come home with the rest of the flock. We searched everywhere. My family and I feared the worst, but found no body. Three days went by, and then she showed up in the middle of an afternoon. Totally unharmed. I was shocked and very relieved to see her alive. But then she disappeared again that evening. We than began to suspect that Blue was disappearing on her own accord. We thought she was refusing to come home, in order to hide from the other chickens.

The next day, we saw Blue outside again, acting like nothing had happened. I grabbed her and locked her in the coop so she wouldn't be able to run away again. Soon after that, we found a huge clutch of blue eggs. Her eggs. It turns out, that Blue had been laying a clutch over the past several weeks, and then went broody over them. She was incredibly committed apparently. What's more, this clutch was laid under our back porch, in an incredibly small crevice underneath the porch stairs. She got in and out through a blue-sized hole in the steps. Needless to say, we quickly patched up the hole and sentenced Blue to some time in the "naughty cage", our de-broodying pen. Not before hugging her first of course.

Thankfully, Blue didn't do anything like that ever again. She lived for another year and a half after that, but unfortunately we lost her on November 3rd of 2020. Here's some pictures of her, as well as her massive hidden clutch:

The old story of my Chicken Berry.

Tribute to my old hen