For the Plymouth Rock Fancier
Breeding to the Standard of Perfection

Fred's Hens- Plymouth Rock Breeders Thread
https://www.backyardchickens.com/threads/the-plymouth-rock-breeders-thread.811228/
​
It's been awhile since Rock heads had a place to support one another in working toward the standard of perfection. A therapy group of sorts. Spring is nearly here in the North and many of you have already geared up for the breeding season. It's time we had another thread to aid one another in our goal of breeding to the SOP. Fred's old thread linked above is a treasure trove of information. A must read in my opinion.

Part Deux I'd like to keep to breeder stock and working to the SOP just like the original thread. No hatchery birds please. This is a place for Rock heads to chat about our progress and downfalls, make contacts with other Plymouth Rock breeders, and generally aid one another in the common goal of improving the Breed.

Hooray! So glad you started this

I have had my breeders isolated since Sunday. Right now I'm starting with two of my Good Shepherd hens and my cockerel from Kraig Shafer. I'm super nervous about mixing lines, but I need higher tails on the males and I simply can't hatch the numbers I'd need to in order to pick through the GS ones. Nor can I house and feed that many, actually that's the main problem.

I'm going to do staggered hatches and go until I have about 40 chicks.

Need to get some good photos of the trio, but it's so hard, the male especially walks around like a dork when he knows I'm watching

Here's one I managed to get the other day showing their great width though: 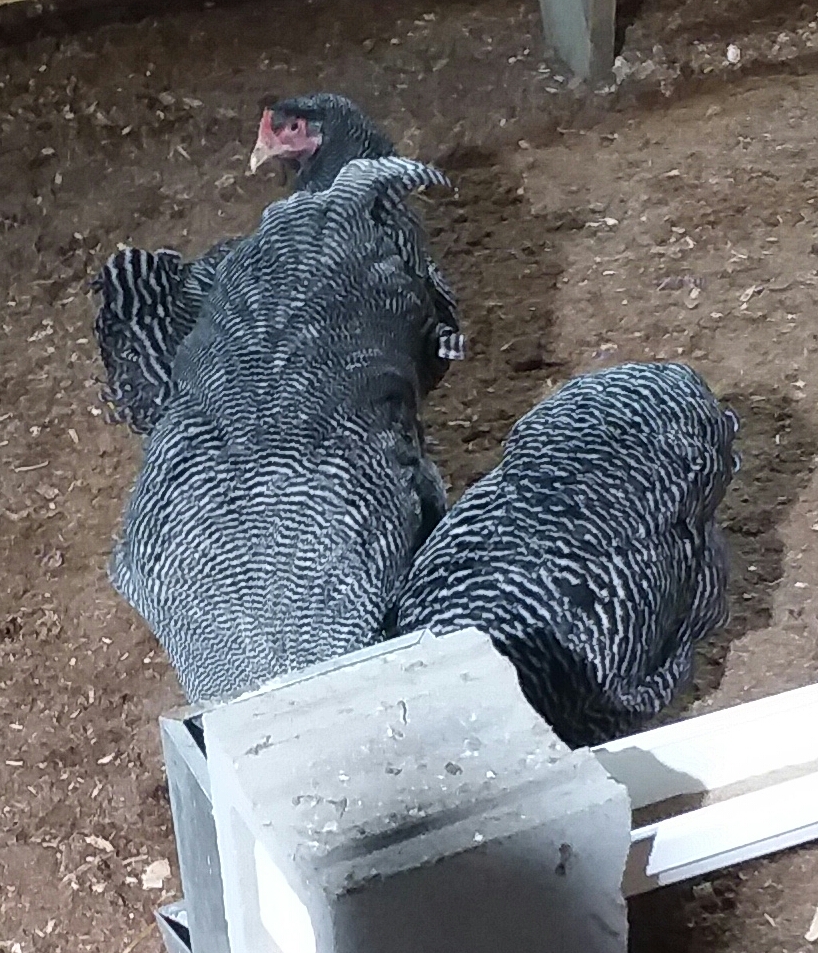 I'm pumped to start the season. We're in a four day thaw here so that should help with getting my old, falling apart breeding pen shoveled out... 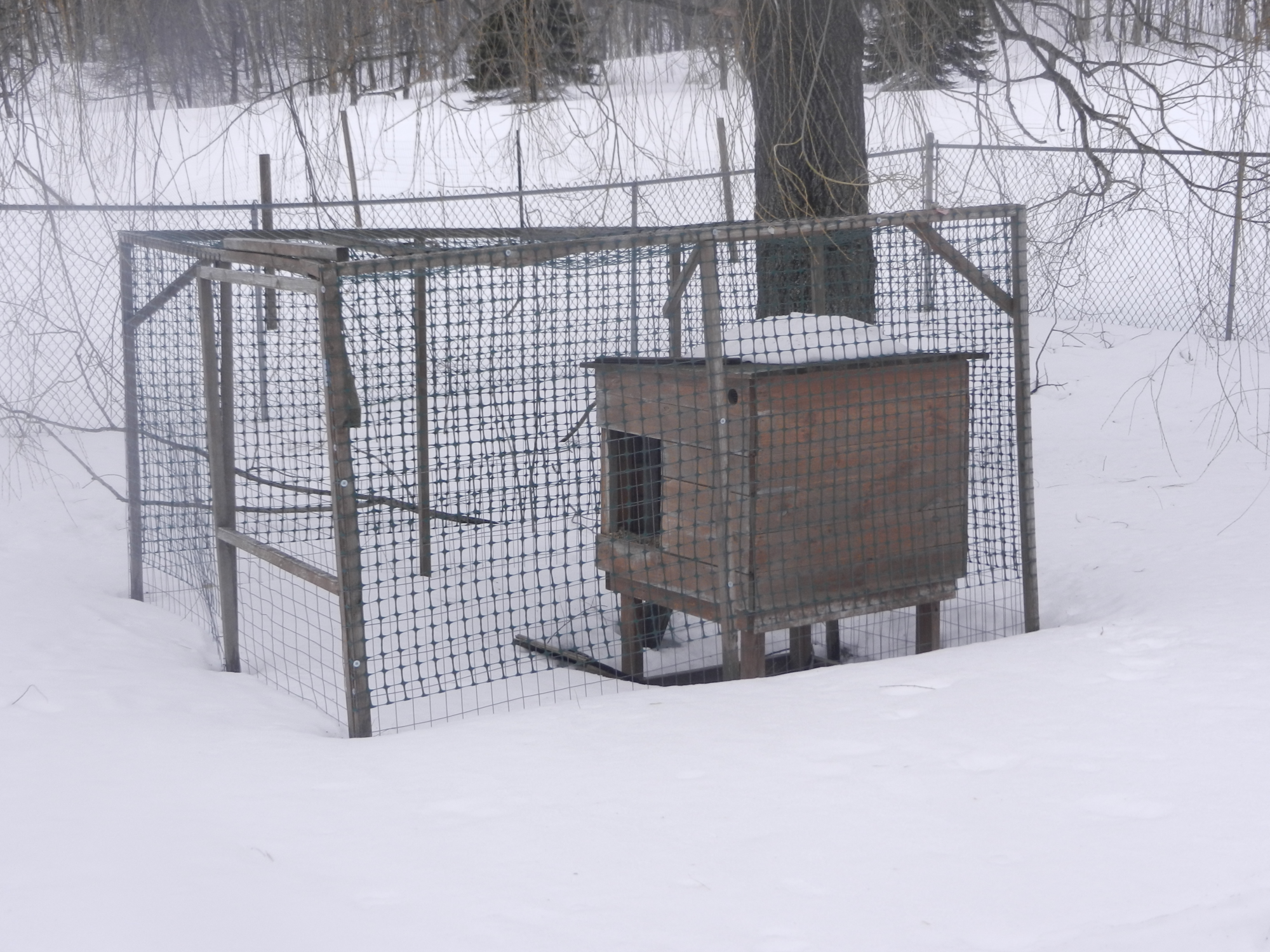 It's good for one more spring... 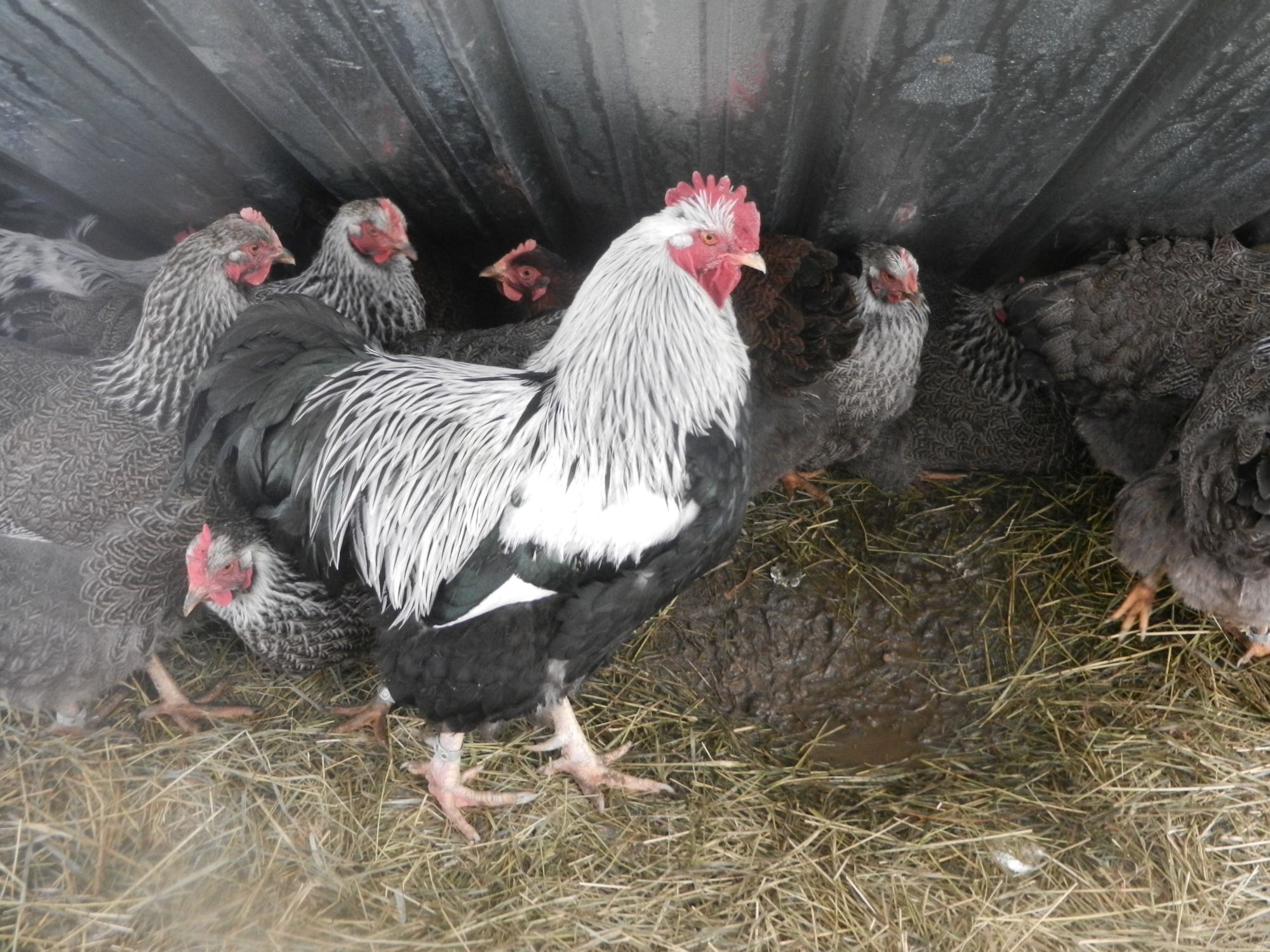 This is my F1 cock, sired some good birds last year, that is going over these two girls I picked up at the Northeast Congress this January- 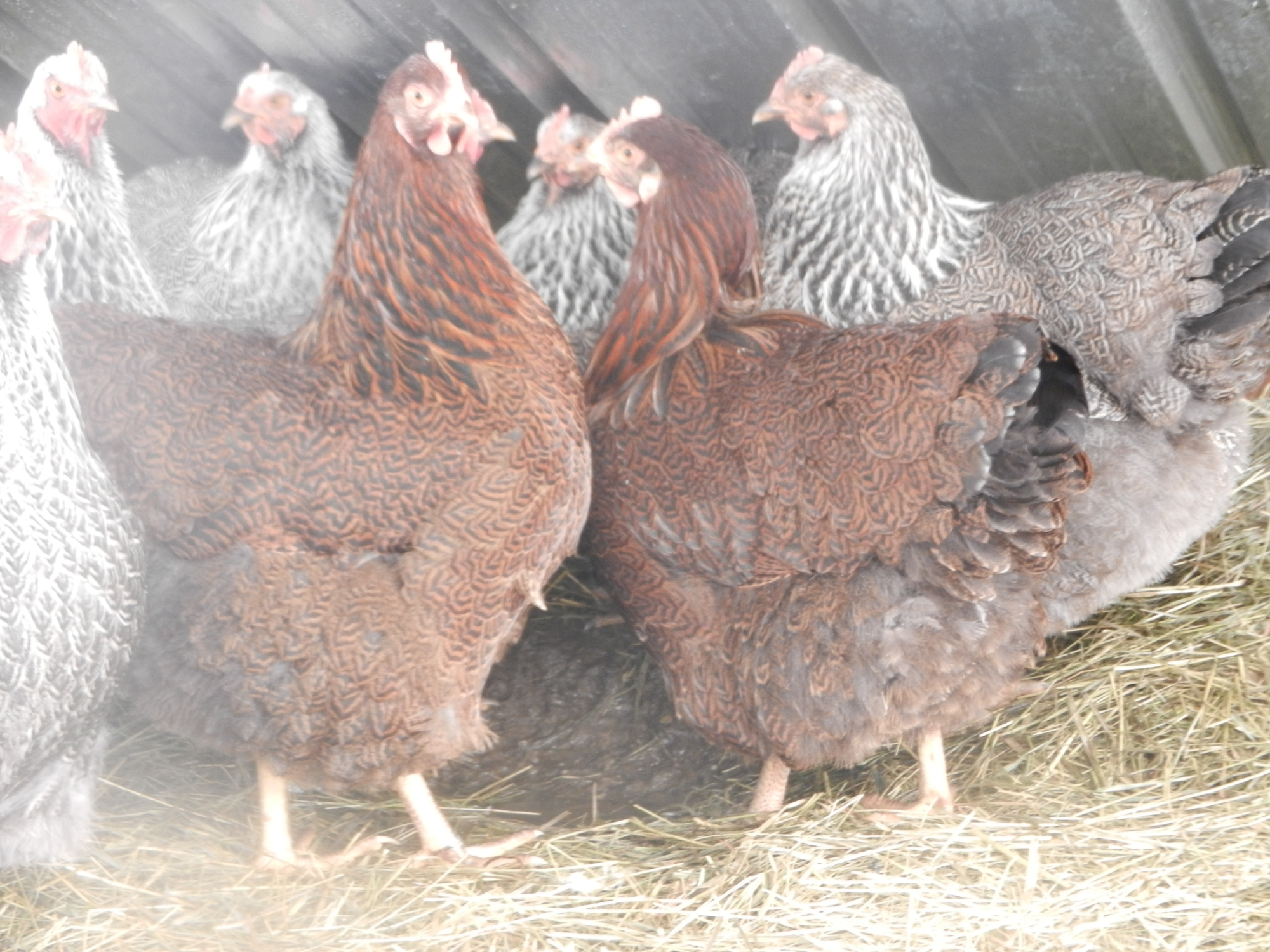 They've a better tail set than shown. Feather quality and so much going for them despite the few faults. Here's a good pick of one of the pluses- 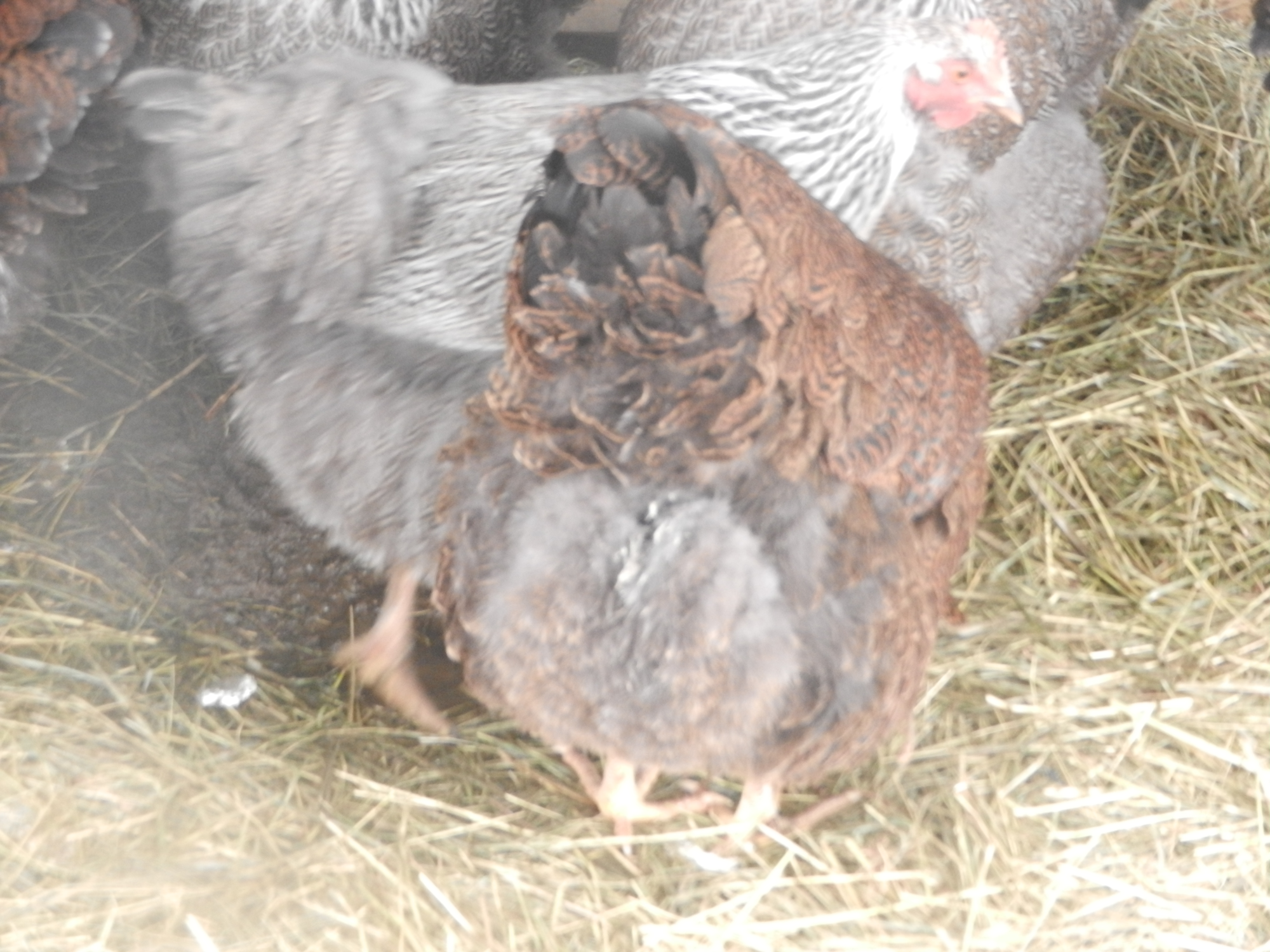 I was teetering back and forth about an F2 cockerel, he was so huge...but I want to breed out the side sprig that's inherent in my flock so finally got rid of him yesterday. The F1 is a bit undersized and of course needs more tail lift and brighter yellow legs. Meh, he's what I got to move forward with and know he will recreate some nice birds I got rid of last fall. He carries side sprig but does not express it. He is my choice to cover the two Partridge girls. I'll start collecting eggs April 1st and instead of hatching Easter will have first set going into incubator.

I'll be hatching from this trio well into summer. Then I'll start with same cock and my three Murphy hens that are three years old this spring. Need to hatch into fall to retain their genetics before retiring them.

@Mosey2003- any suggestions to change intro post PM me.

Love the feather quality, backs and tents on those girls! I'm gonna be working towards even tighter feathering and getting rid of the cushions. My girls aren't bad, but there is still a bit of cushion.

I've heard good things about Shaffer Line. It looks like one of your breeder hens has incomplete barring. The Sire should go a long way in aiding that. Not to put down Shepherd Line. Very old closed flock they are with a ton of potential.

Mosey, maybe give your thoughts on pros and cons that you see in your stock of both lines. Obviously we are not bashing any one line but for readers it would be helpful to know, as you observe, what's going on with each line.

No line is perfect, they all have incline to one fault or another. For instance I've Murphy Line Silver pencilled, they are on the light (weight) side of standard and for my stock obtained carry genes for side sprig. Meh, far better to type birds than another line of Silver I obtained- but Hortsman's birds did yield far better size. Brassiness was the problem with those and both lines, for my birds obtained need more lift in males. Ya got good and bad with each line and to present those pros and cons I think is beneficial for those wanting to obtain stock.

The part that's already killing me about this thread already is we've got three months minimum before seeing if our matings are an improvement....

I don't know if I'd call it incomplete barring? I've never heard that term in particular. She DOES have a random all-black feather. This is mentioned in the standard, and depending on the location isn't too much of a problem. They're only serious if in the wings or tails, I do believe. Am I happy she has one? Not really. Am I super worried about it? Also not really. I'm going for type first, paint second

The GS hens
Pros:
-Good weight and size. The hens make standard weight and have a good sized frame overall. I have a couple smaller ones, but I wouldn't even say they're under 6lbs, I do need to get the scale out soon. Weather has just been crappy.
-Good width, front to back. This is very important to me.
-Besides the occasional random solid feather, their barring is pretty nice overall.
-Good yellow legs, good width of leg, and good length of leg.
-They all hit point of lay before 7 months of age, this is VERY good for that line, and I'm sure I have 'my' breeder to thank for it. My feed doesn't hurt, but the potential has to be in there for it to matter.

Cons:
-Cushion - they all have some. Not as much as I've seen in some birds, but it's there, and it needs to go.
-Fluff - again, not as bad as some, but still a bit too fluffy
-Depth/roundness in front - only 2-3 out of the 7 I have are what I call really good as far as the proper gravy bowl shape in front. The rest aren't really bad per se, but I want this stamped in much stronger
-To me, they look just a touch crow-headed. I've been told they aren't, so maybe it's just my eye, but that was something I mentioned to Kraig when I asked for a male. I told him I was working on tails and I was worried on heads.
-Most of the cons of this line relate to males for me. Low low tails and also low wings.

The Shafer cockerel
Pros:
Honestly, I like nearly everything about him. He's wide-wide-wide both across the breast and all the way back through his tail. Has a great head, good legs, nice wing carriage, nice tight wide head, good back to my eye. His tail hasn't fully furnished yet, so I'm still waiting to see, but it looks promising when he's roused. Back seems level and of a good length.

Cons:
I suppose he could have crisper barring, if I wanted to nitpick. He's, what, 8 months old currently? So I'll be interested to see what he looks like after a molt.

To be clear, the GS hens I got came directly from Frank Reese a few years ago and then 'my' breeder hatched a LOT and has bred them up to where they are right now. He deserves a lot of credit, he focused a lot on size and type and has really improved them. So I'm working with a good head start there, and I know that they are pure GS to start out with.
Last edited: Mar 15, 2019

Yay!! I’ve been through the other thread and was quite disappointed that it was no longer active!! I have nine eggs set rn on day 7 had ten but one had hairline crack and just a dark line where it quit..I did a lot of research and thinking before I decided what Heritage breed to go with and chose the Barred Rocks I love their look as well as their dual purpose..this will be the first time ever breeding and going this route with chickens I’ve always done the hatchery and just had chickens..I’m ready for the next level..this is also my first time incubating so I’m super nervous and probably worse than a mother hen it’s ridiculous how I can just sit and stare at eggs lol..anyways I’ll probably have lots of questions as to which chicks to keep and which to cull for meat..I’m very interested in trying shows in the future perhaps not this year but maybe next year!! Btw I’m AngieMae 41 years old end of this month and just moved out to the sticks where my homesteading dream is finally coming true...I have four children all grown aside from my 16 yr old who lives with his father now..I stay at home now and starting my life long dream of my own little farm!! Something to keep me busy provide and eventually bring in a little extra income..I have zero chickens as of now aside from the four lavander orphingtons at a friends that are hatchery birds that are just gonna be a part of a laying flock for eggs..hoping to get them out here next few weeks coop needs some work it’s already a part of the property but needs a new roof and some reinforcements done but it’s a sturdy building and huge so two three flocks in there be not an issue..anyways I’m rambling now just wanted jump in say hi and say I’m very glad there’s another thread like this!! One question does anyone have candling pics of Barred Rock eggs? They are a bit difficult to see in I’m at day seven and I believe I see the head and veining but boy it’s hard see and this being my first time it’s even harder I’m sure plus I’m nervous about taking them out the incubator long..been using a small flashlight but getting a candler made for eggs soon...

They're no different than any other brown egg

No I know that lol just harder see and seems like YouTube has mainly white eggs they candle to show so much easier to see...I’ve found maybe two on darker eggs and not at day seven..I’m sure I’m being paranoid as I can see something going on in there...I think