For the last two months I've been stalking this website trying to gather information to start a research project. And this past Monday, it was finally time for me to start! I figured I would post a thread in this forum so those interested can follow along, as well as a quick way to ask advice in case I get into a jam, because I've never hatched anything before! Hope you guys all enjoy this journey because I am personally very excited!

A little bit of background:

I studied to be a veterinarian for 3 years at a university in the states before realizing I simply am awful at science. It was sad to admit it, but becoming a vet simply isn't in the cards for me right now. So I started to look for a new direction for my studies, and stumbled upon courses in animal behaviour. I had a brief introduction to it at my school in Rhode Island because one of the courses I took was one about animal behaviour. And here's the crazy part, we had to train a friggin' chicken as part of our final mark! I used to be terrified of anything with feathers because of an incident with a very angry chicken when I was like 3, so this was an interesting challenge for me.
Obviously, I got over it real quick or I wouldn't be on this site

My love for chickens and other farm birds started to grow and after going back to live with my parents while figuring out where to go next, I started to farm sit for this wonderful lady that had a crazy collection of animals. And of course, she had chickens!

One day when I was checking the nest boxes I made for the gang and I came across the cutest tiniest egg I had ever seen! Later I found out it was called a Fairy Egg. I was so fascinated by it I decided to try to incubate and and see what would hatch, if anything would even hatch. This is what started my crazy science mind. While after 6 days in my makeshift incubator made with a heat lamp and a box I saw nothing happening inside the egg I cracked it open and found no yolk, and as you guys all know, no yolk no baby. At first my plan was to study fairy eggs and see if it would even be possible to get a few that do have a yolk (my research online concluded that some do have a yolk) and to see if anything would hatch, but after asking around in my area I realized there's no way to get a large enough amount of fairy eggs to do a conclusive research project, they just don't happen often enough.

While my fairy egg idea was a bust, my search for info on them did bring another type of "abnormal" egg into my sights. I'm sure you guys can guess what that was, yup, double yolked eggs!
With my scientific heart set on doing a research project I started searching for information on the incubation of double yolk eggs, if its even been done. As I'm sure you guys have seen before, there's very few instances where a double yolk egg has successfully hatched two healthy chicks, and it as never been done on a large scale. The only known case is from 1849 where one guy claimed his hen laid 10 doubles in a row and he managed to hatch 18 healthy chicks from those eggs. However, I have yet to find any proof of this fact.

So, I started to put my project in motion. It's still gonna be a while before I can go back to school and what better way to fill my time than with cute fluffy babies!

I acquired 12 double yolk Muscovy eggs on Monday. Not that I specifically looked for Muscovy eggs, it just happened to be what I had available in my area.

I candled, weighed, and marked them with an X/O and air cell, and made observations about the initial candling.

We are now at day 4 and to my great excitement I saw that the few I sneaked a peek at have started to develop!! I never thought I could be so excited about watching eggs but it's just so amazing to know something is growing inside there!

Just wanted to share some pictures I took of a couple eggs I sneaked a peak at!

These are pictures I took yesterday on day 3. 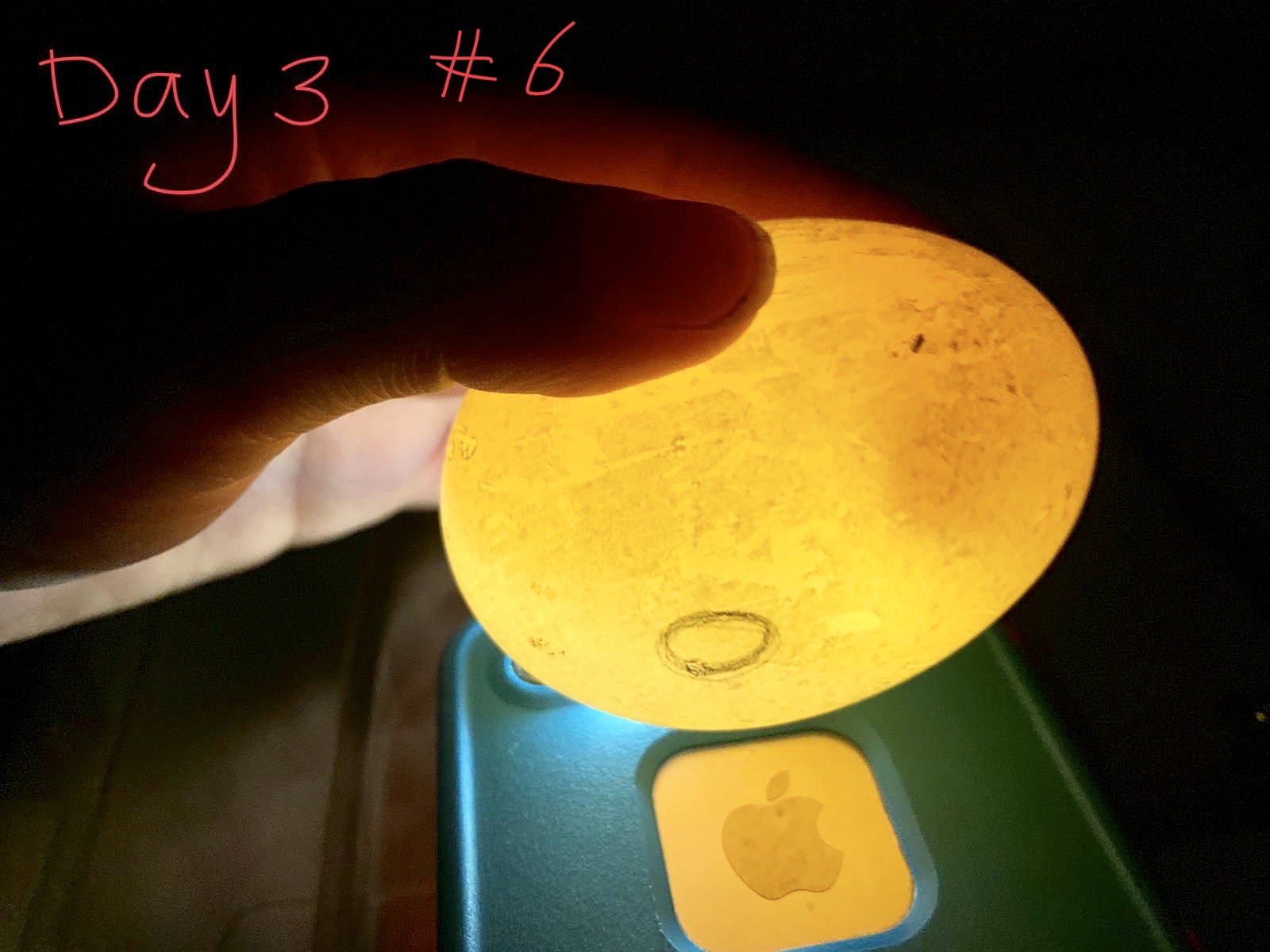 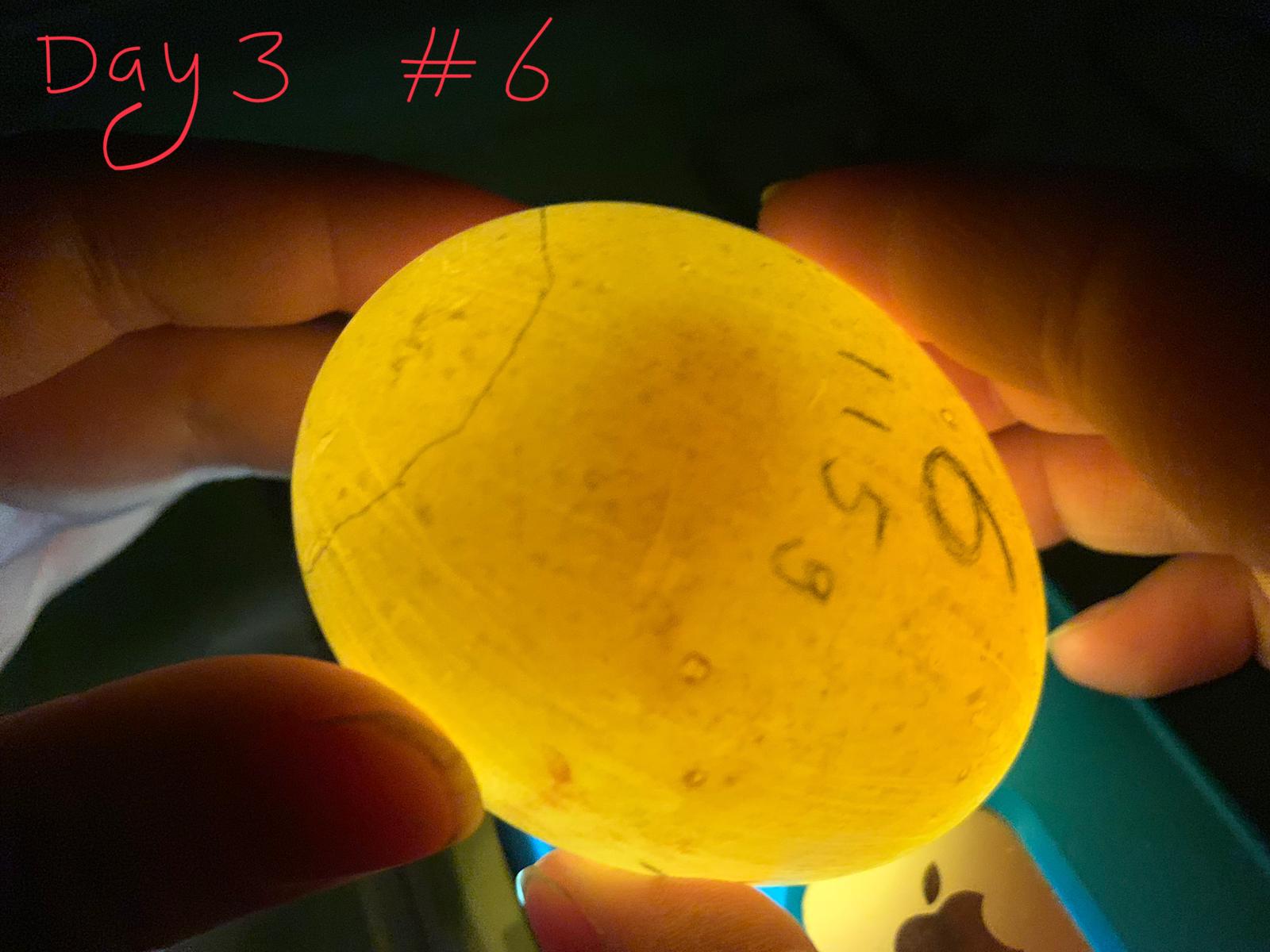 I was kicking myself for not being able to get a clear image of both of them with the number but you can trust me when I say it’s the same egg. One embryo at the blunt end, one embryo at the pointy end!
I almost cheered when I saw this, so happy!

Took this picture just now when I went to go check on the eggs and just couldn’t help but sneak a peek!

Today is day 4, and this is one of the eggs I had a feeling from the start was gonna do well. 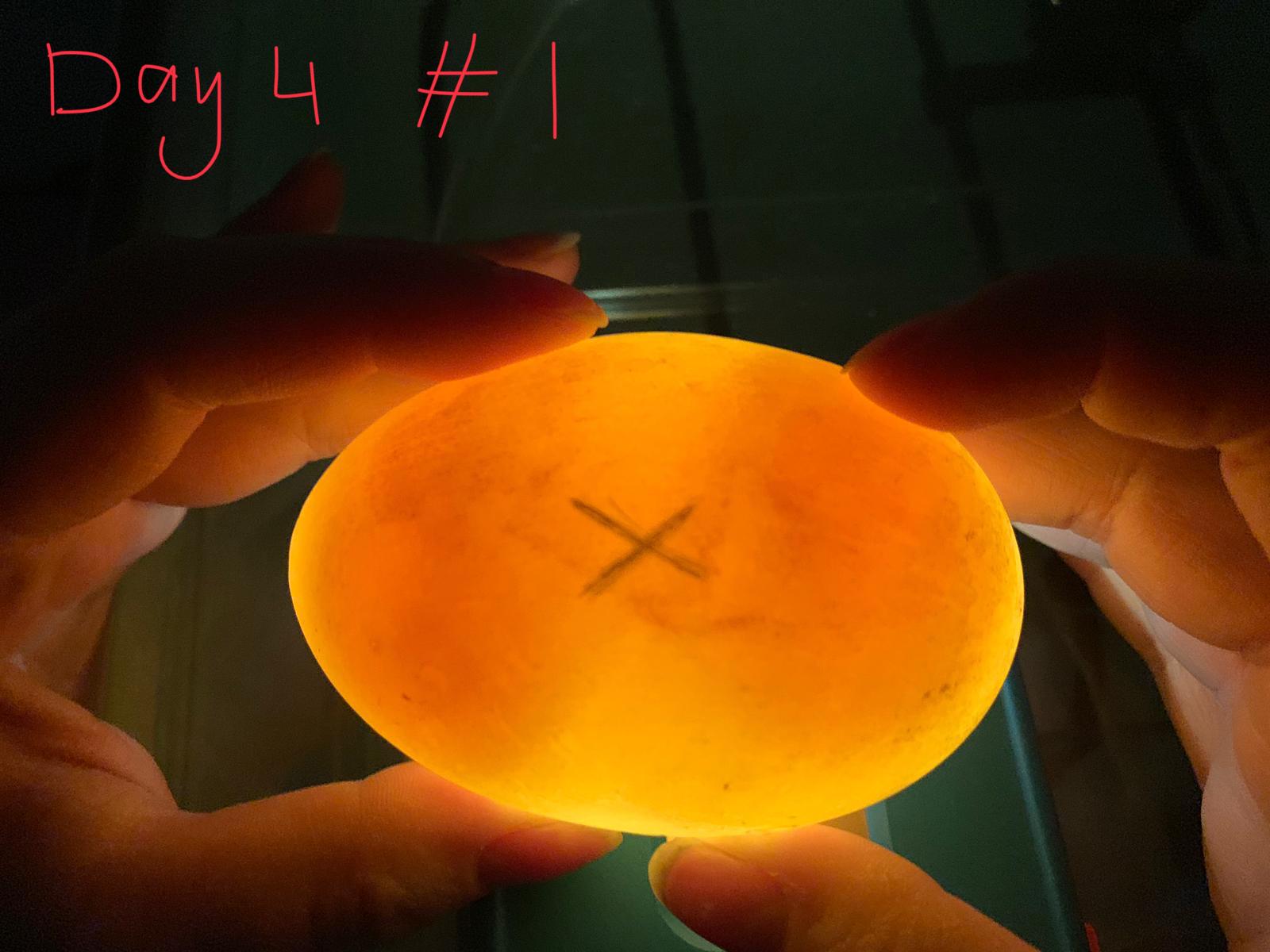 I still can’t believe it but you can clearly see TWO EMBRYOS!!!

I’m gonna wait till day 7 to candle all of them and make another observation chart along with weighing them to make sure I don’t have to adjust the humidity. It’s gonna be a long 5 weeks but I think it’ll be worth it. I’ll give you guys updates whenever I can of course!

It is extremely rare for double embryos to survive incubation and hatch. Usually one fetus dies and the other is poisoned by the decomposing of the dead fetus. A lack of sufficient nutrients for two is also a problem. Not that it wouldn’t be amazing to hatch twin duckies!!!! It’s just super difficult and sketchy.

GldnValleyHens said:
It is extremely rare for double embryos to survive incubation and hatch. Usually one fetus dies and the other is poisoned by the decomposing of the dead fetus. A lack of sufficient nutrients for two is also a problem. Not that it wouldn’t be amazing to hatch twin duckies!!!! It’s just super difficult and sketchy.

I know, though I’m hoping to learn from this batch and adjust some things for the second one, since I’ve already come up with a few ideas to help with those problems

I’ll keep you guys updated on how it goes!

I see two yolks on #1, but no veins let alone an embryo.
#6 doesn't look like a double.
Maybe my eyes are just too old.
Will follow along....my daughter also was curbed from vet school dreams due to college science classes.

There has been 1 successful hatch here on BYC!
Kayla has tried, but hers didn't make it.
@littleprairieheartsfarm almost made it with hers.

aart said:
I see two yolks on #1, but no veins let alone an embryo.
#6 doesn't look like a double.
Maybe my eyes are just too old.
Will follow along....my daughter also was curbed from vet school dreams due to college science classes.
Click to expand...

Number 6 has them on opposite ends so it’s hard to tell they’re different ones, but both pics are of a different embryo. It was only day 3 so no veins would be visible yet, I only know they’re embryos because the yolks are a lot darker than the initial canceling shower, which tells me there’s development going on. Actually checked number 1 again today and you can now see veins! Will post a picture later!

Too bad about your daughter, it’s frustrating when you want something really badly but you can’t because your brain just works differently. Maybe animal behavior is something for her too? It’s all psychology based and not a lot of science!

HuffleClaw said:
Both of my doubles made it to day 18 and died

I’ve got quite a long wait with them being muscovies but I’m really hoping at least one pair makes it so fingers crossed!

9SpiceyChickens said:
There has been 1 successful hatch here on BYC!
Kayla has tried, but hers didn't make it.
@littleprairieheartsfarm almost made it with hers.
Click to expand...

Yes I saw that! Read all 57 pages of comments to follow it haha. I’m hoping having 12 of them will mean at least a few are successful. I made extensive notes on their yolk positions and most are nicely on opposite ends. The few that appeared to be closer together I’m a little worried about but I’m keeping an eye on them all. Will do another round of candling them all and making notes as well as weighing on day 7!